The championships have been decided in most of the major racing series around the world, but in Japan, the racing action is far from over.

At the end of each year, the country’s big three automakers – Toyota, Nissan, and Honda – all give back to their supporters at home with their end-of-year manufacturer fan festivals. The annual celebrations of racing successes of the season since passed, and of the racing heritage that they all pride themselves on.

The 2017 festival season commenced this Sunday at Fuji Speedway, with the 2017 NISMO Festival – the 20th annual running of the event, the longest running of the three festivals.

Saturday was a day to prepare for the festivities to come. Press interviews, installation laps, the first looks at the historic and modern cars – and the drivers who’ve made them legendary. A chance for the Nissan drivers of today to sample yesterday’s cars. Everything was ready to go on a cold, but sunny December weekend in central Japan.

Then at 7:00 AM, the gates opened to an estimated crowd of over 28,000 Nissan and NISMO enthusiasts – most from Japan, with a few who traveled from overseas to get a first-hand look at these beautiful cars, driven by generations of the best racing drivers.

The first event of the festival was the NISMO Cars’ Parade Run, featuring over 160 NISMO-tuned production vehicles, ranging from the March (Micra) sub-compact and Juke crossover, to the Fairlady Z cars and of course, the GT-Rs. 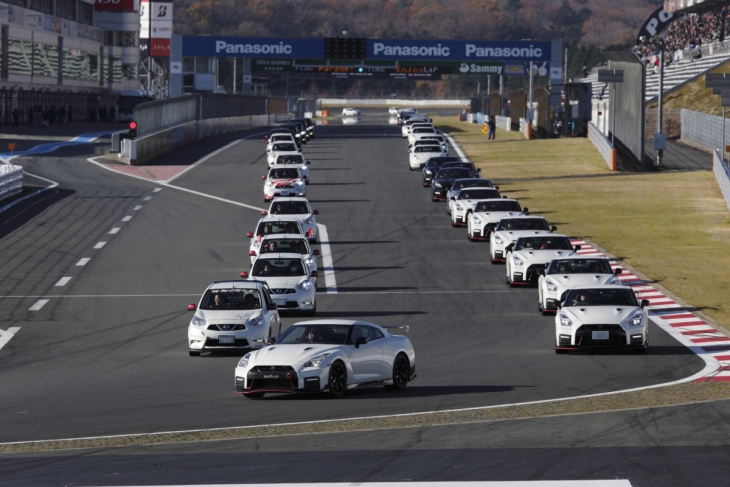 Of particular interest was two of the R33 GT-R based NISMO 400Rs at the head of the parade – two of just 44 examples of the race-bred 400R that were ever built, making it one of the rarest GT-Rs ever produced.

Then, it was time for the race cars to take to the track for the first time in anger – for the fan favourite Circuit Safari.

Many boarded the buses to travel Fuji Speedway as nearly a half-century of Nissan racing vehicles passed by them at speed. For those wanting an even closer vantage point, a select few fans were selected to ride in the passengers’ seat of some of the cars!

The first of the exhibition race was the 10th anniversary Z Challenge, pitting street-tuned Z33s and Z34s against one another.

To add to the intrigue of this five-lap sprint, former Super GT stalwart Tetsuya Tanaka – five-times winner of the Tokachi 24 Hour race, and current team director of Gainer – was placed at the back of the grid against a field of enthusiast drivers.

Tanaka used all of his speed and experience to try and get to the front of the 15-car field, but ran out of laps and could only get up to 8th place. Eiichi Gouya, driving for Kanagawa-based Z Car specialists Garage 4413, led the race from lights to flag to pick up the win.

Perhaps the best “bang for your buck” race followed shortly thereafter, the Nissan Historic Car Exhibition Race. A field of 21 touring cars from the 1970s, comprised primarily of two generations of the lightweight Nissan Sunny, took to the track for a thrilling race with a particularly entertaining first lap! 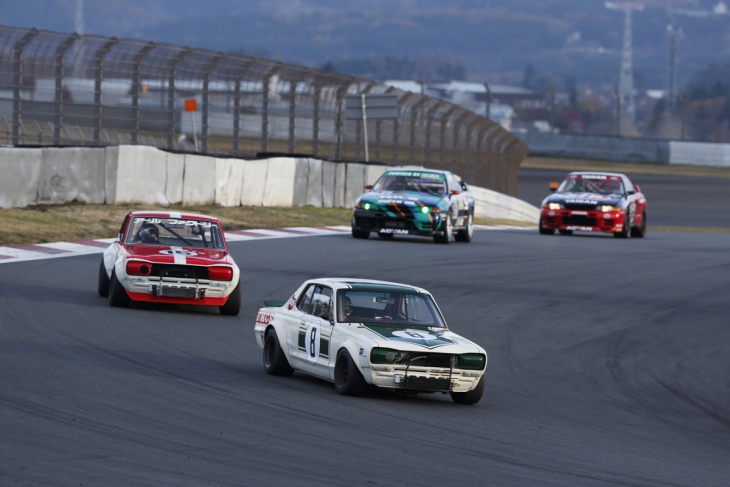 One of the favorites in the race was an unannounced Nissan racing legend: Former JGTC and All-Japan Touring Car Champion, Masahiko Kageyama, driving his Leyton House-liveried B310 Sunny. Even after a massive lockup at the first corner, Kageyama quickly found his way to the front of the field, in a race that saw plenty of slipstreaming, four-wheel drifting, and even some atrition!

Super Taikyu regular and former GT300 driver Yasushi Kikuchi had an early challenge for the 3-time JGTC champ Kageyama, before his B310 overheated and broke down at pit exit.

From there, Shinya Gamou – amateur racer and brother of GT300 & N24 rising star Naoya – made a charge through the field, and closed in on the Leyton House B310 of Kageyama. But in the end, after seven frantic laps, it was the veteran Kageyama who held off the upstart Gamou.

After a brief intermission, was the semi-main event of the day – the NISMO Grand Prix, a twelve-lap race featuring 16 Nissan race cars from Super GT, Super Taikyu, and even a wildcard from the Blancpain GT Series. 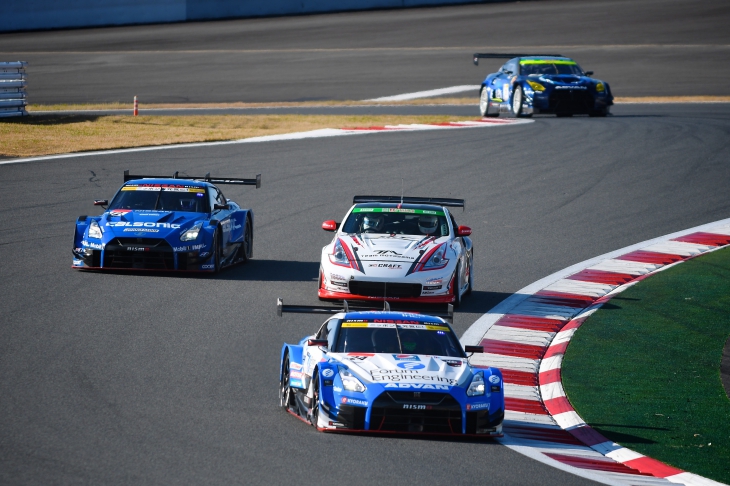 Ronnie Quintarelli, in the #23 Motul Autech GT-R, started on pole position. He was soon passed by a hard-charging #46 S Road Craftsports GT-R of Katsumasa Chiyo. To balance out the three classes of cars, the GT500 crews served a mandatory pit stop, for a mock four-tire exchange and a driver swap.

The mechanics of the #23 NISMO crew’s quick work sent Tsugio Matsuda out into the lead, and eventually, to the overall victory ahead of Satoshi Motoyama in the S Road GT-R. It’s a winning streak of sorts for NISMO, who won the final Super GT championship race of the year in 2017 at Twin Ring Motegi.

The GT3 class was ultra-competitive, and saw a major upset as former gymkhana champion Yusaku Shibata took the class victory for Tomei Sports’ #360 RunUp GT-R. Even in an exhibition event, it was a big win for one of Super GT’s smallest and longest-serving privateers, who headed off the challenge of many more accomplished teams and factory drivers.

The winner in the ST-3 Fairlady Z category was Masaki Kano, driving for Techno First and SKT Team Motoyama.

Of course, the NISMO Festival was not confined to just on-track running – there were a number of autograph signings, driver-hosted talk shows, events for children, and many other opportunities for the fans to get close to their favourite cars – some of which were only here for show, at least for this year.

Then, after a brief intermission, came the main event of the afternoon: The GT-R Heritage Run, to celebrate the racing history of the famous red badge. 16 cars, spanning 46 years of the GT-R’s racing lineage. Each of these incredible machines, bar one, was driven by one of its original drivers.

The racing GT-Rs of the 2010s were the first to take to the track, led by the 2017 Motul Autech GT-R driven by Tsugio Matsuda, followed closely by the previous-generation, V8-engined 2013 Motul Autech GT-R of Ronnie Quintarelli. Katsumasa Chiyo was reunited with his 2015 Bathurst 12 Hour-winning GT-R GT3, and Michael Krumm drove the GT-R NISMO GT1 from his 2011 FIA GT1 World Championship campaign with JRM Racing. 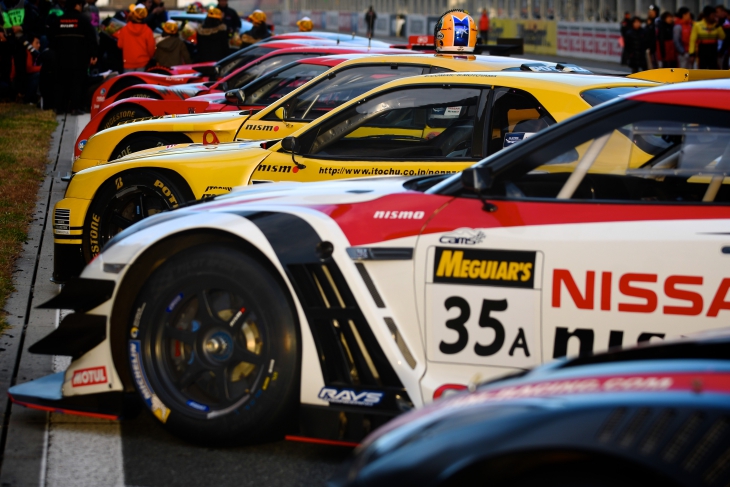 The second group featured four previous championship-winning GT500 GT-Rs from NISMO. Satoshi Motoyama drove the 2008 Xanavi NISMO GT-R – the first racing variant of the now-legendary R35. Bridging the gap to the previous generation Skyline GT-Rs was the 2003 Motul Pitwork Skyline GT-R, with Kazuki Hoshino standing in as a deputy driver. And finally, the 1998 R33 and 1999 R34 Pennzoil NISMO Skyline GT-Rs which won back-to-back GT500 titles, with Masami Kageyama driving the ‘98 car with its extreme double-deck rear wing, and Érik Comas driving the ‘99 car.

The third group was a duo of Nissan Skyline GT-R LMs, which scored top-five finishes in the GT1 class at the 24 Hours of Le Mans in 1995 and 1996. Masahiko Kondo in the ‘95 TV Asahi GT-R, and Toshio Suzuki in the ‘96 Clarion GT-R, both took it fairly easy – but the GT-R LMs, made famous from their Le Mans exploits and their appearance in the original Gran Turismo, were a favorite of the drivers over the weekend. 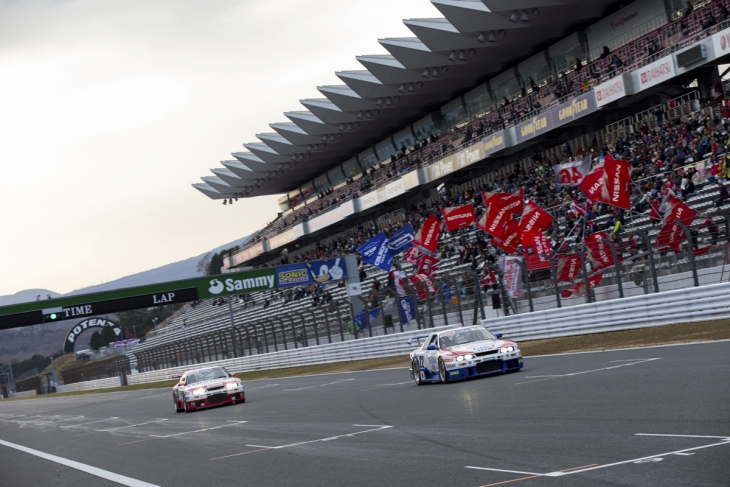 The penultimate group were three of the R32 Skyline GT-R touring cars which went undefeated from 1990 to 1993 in the All-Japan Touring Car Championship. No surprise, then, that the leader of the group was the most famous racing GT-R of them all – the Calsonic Skyline GT-R of Kazuyoshi Hoshino, championship winner in 1990 and 1993. Joining them was the eye-popping HKS Racing GT-R of Osamu Hagiwara, and a transcendent superstar of motorsport, the “Drift King” Keiichi Tsuchiya, in his STP Taisan GT-R. The three Group A legends brought a glimpse of the Fuji Inter-TEC races of old to the NISMO Festival with close-quarter running.

At the end, there was the beginning of the GT-R racing lineage, with two of the KPGC10 “Hakosuka” Skyline GT-Rs which won over 52 races from 1970 to 1972 – including the JAF Grand Prix touring car race in 1971 with 2-and-4 wheel legend Moto Kitano, and 1972 with Nissan racing hero Masahiro Hasemi, who both drove their original race-winning cars.

Finally, Japanese endurance racing legend Kunimitsu Takahashi drove the rarest racing Skyline GT-R ever built: The 1973 KPGC110 Skyline GT-R Racing Concept. It’s the only race-built version of the ultra-rare “Ken & Mary” GT-R, of which only 197 were ever built before production ceased in the wake of the global energy crisis. 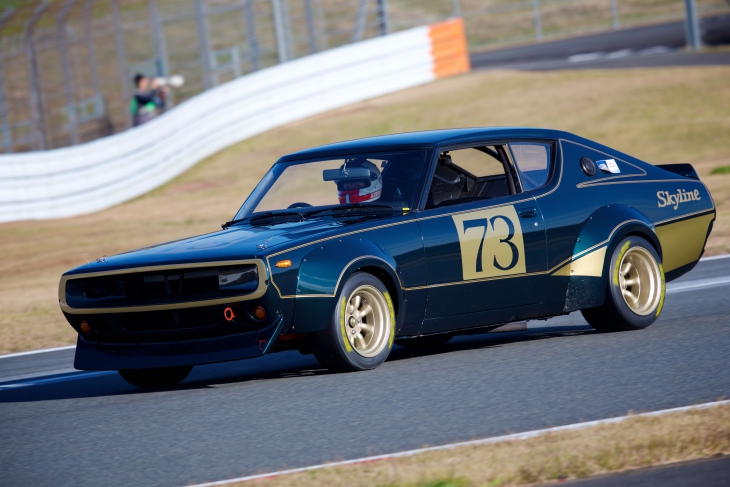 Once all the group runnings completed, all 16 heritage GT-Rs took to the track together for the final laps around Fuji Speedway.

With the sun setting, the drivers and cars gathered for a final ceremony and closing remarks. There were awards to be given out: The first, to Nissan factory driver and rising star Mitsunori Takaboshi, for winning the All-Japan Formula Three Championship, as well as four lifetime honours for guest drivers Takahashi, Tsuchiya, Hagiwara, and Comas.

Finally, NISMO president & CEO Takao Katagiri closed the show by thanking the fans for their support over the past year, with a pledge to take back the GT500 championship in 2018, as well as support for Nissan as they enter the FIA Formula E Championship in twelve months’ time.

The next manufacturer festival takes place in just one weeks’ time, 250 kilometers northeast, at Twin Ring Motegi for the Honda Racing Thanks Day on 3 December.