The third and final manufacturer fan festival in Japan was the Toyota Gazoo Racing Festival (TGRF), held at Toyota’s racing headquarters at Fuji Speedway a week ago.

An estimated crowd of 42,500 spectators came to Fuji on a clear, crisp, and sunny December day to watch some of Toyota’s most revered racing machines, from the FIA World Endurance Championship, the Autobacs Super GT Series, and the Nürburgring 24 Hours perform at speed around the legendary circuit.

But this year’s event also had a championship to decide: In the ultra-competitive Toyota 86/BRZ Race Series, where the final round of the Professional class season was held.

Throw in the presence of Japanese racing legends and 86/BRZ regulars like Juichi Wakisaka, Naoki Hattori, Nobuteru Taniguchi, and present stars like Kenta Yamashita, and this final race of the season was bound to bring the fireworks. 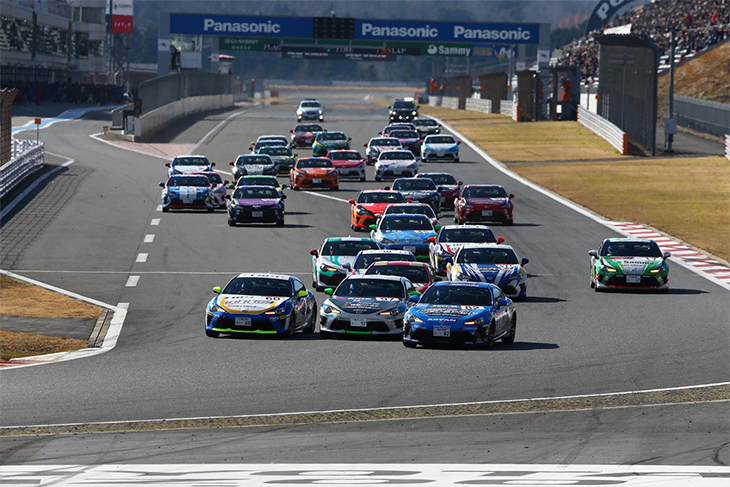 A great start for Hattori from the front row saw him lead the first lap, but his Dunlop-clad 86 was soon overtaken by the champion-elect Kondo, running Yokohama tyres in one of the rare one-make categories with an open tyre selection. Plenty of overtaking was to be had, particularly as they slipstreamed down the 1.5 kilometer front straightaway.

Halfway into the ten-lap sprint, the veteran Aoki powered past the young upstart Kondo for the lead of the race, and eventually, drove on to his second win of the season.

Kondo held on to finish in second, enough to clinch the championship in Japan’s most prolific one-make series. Though he never won a race in 2017, his seven podium finishes from nine races were enough to put him over the top of his less consistent rivals. The 28-year-old Kondo will soon make his international racing debut in the Dubai 24 Hours with D’station Racing & Porsche. Two-time series champion Taniguchi rounded off the podium after a fierce battle for 3rd.

The main event of the festival was a series of demonstration runs entitled, “Pushing the Limits”. And it began in quite spectacular fashion with the appearance of one of Toyota’s most infamous racing cars.

Two-time GT500 champion Kohei Hirate drove the 1970 Toyota 7 Turbo, and on hand to watch the car from the pits was Toyota racing legend Shihomi Hosoya, their ace factory driver from the late 1960s. With a 5 litre, twin-turbocharged V8 engine producing over 840 horsepower, the Toyota 7 had Can-Am dominance in its sights, before the project was cancelled – in no small part due to two fatal testing accidents in an 18-month period.

The legend of the Toyota 7 still endures today. 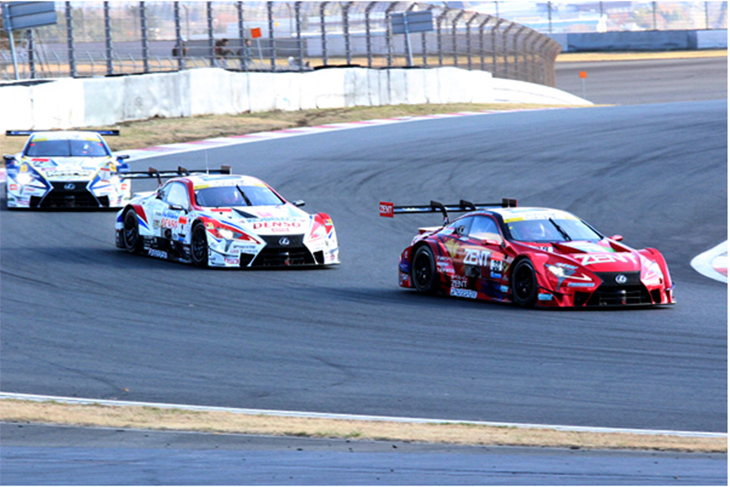 Throughout the race, the #37 KeePer TOM’s LC500 (Ryo Hirakawa/Nick Cassidy), the #38 ZENT Cerumo LC500 (Yuji Tachikawa/Hiroaki Ishiura), and the #1 Denso Kobelco SARD LC500 (Heikki Kovalainen/Kohei Hirate) swapped places at the front of the field, as their counterparts did in GT300 behind them.

After a mid-race intermission and driver change, and a few more laps of running, the newly-crowned GT500 champions Hirakawa and Cassidy took the chequered flag, and fittingly so. The GT300 sub-class battle, which included a four-wide moment down the front stretch, was won by the #51 JMS LM Corsa RC F GT3 of Yuichi Nakayama and Sho Tsuboi.

The backbone of Toyota’s racing success is based on their world championship efforts, and so fittingly, the festivities shifted to a glory run for three of the company’s most groundbreaking prototype sports cars, driven by the three home-grown talents who represented them at the 24 Hours of Le Mans this year.

Yuji Kunimoto drove the 1985 Dome/Toyota 85C-L, the first factory-run Toyota to enter the fabled Grand Prix of Endurance. In the hands of Satoru Nakajima, Masanori Sekiya, and Kaoru Hoshino, the 85C-L with its 2.1 litre turbo four-cylinder engine went the distance and scored a 12th place finish, bested only by an armada of the more powerful Porsche 956/962s and Lancia LC2s.

He was followed by Le Mans lap record holder Kamui Kobayashi, in the Toyota TS010, the first Toyota prototype to score an overall podium at Le Mans in 1992, and the car that took Toyota’s first-ever World Sports Car Championship victory at Monza that year with Geoff Lees and the late Hitoshi Ogawa. There’d be no mistaking the TS010 for anything else on the track – not with its piercingly loud, 3.5 litre V10 engine that could have been plugged into any Formula 1 car on the grid at the time. 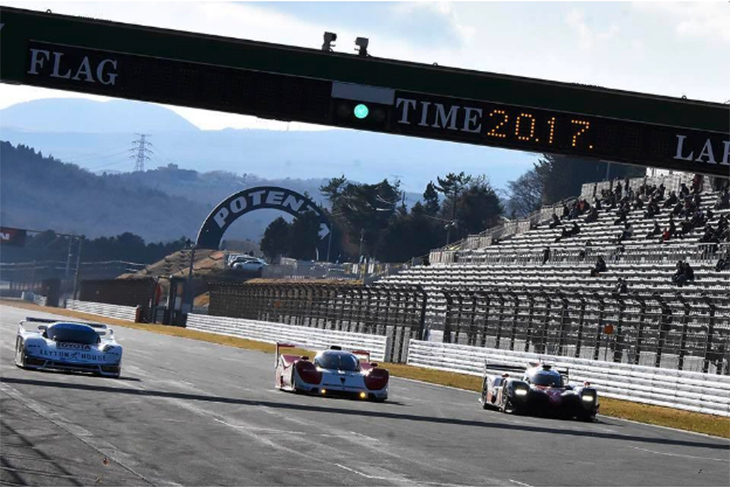 And fittingly, making its first exhibition run in Japan, the 2017 Toyota TS050 Hybrid, winner of five races this year in the WEC. Kazuki Nakajima, so nearly the winner at Le Mans in 2016, put the hybrid-V6 machine through its paces, just three months removed from his victory at the rain-tattered 6 Hours of Fuji, in the same car, and at the same venue.

With Toyota committed to the 2018-19 WEC campaign, the fans in attendance will be able to see more of the mighty TS050 – the last standing example of the LMP1 hybrids – competing for victories for the near future.

Celebrating over a decade of factory-supported efforts at the Nürburgring, a total of eight cars then took to the track for a demonstration of N24 legends.

This included the two most recent SP3T class winners, the Lexus RC turbo coupe from 2017, and the rival Subaru WRX STI that won the year before. Also on track were the two Lexus LFA specials from 2009-10, two Toyota 86es, and the Lexus C-HR crossover. All driven by their original cast of drivers: Takamitsu Matsui, Naoya Gamou, Hideki Yamauchi, Takayuki Kinoshita, Tatsuya Kataoka, Takeshi Tsuchiya, and leading lady Kumi Sato were among the drivers taking part.

TGRF wasn’t just for sports cars either – it was also a celebration of their single-seater successes, including the two-time and reigning Super Formula champion Ishiura, and of their rallying heritage, with WRC rising star Esapekka Lappi driving the new Yaris WRC, winner of the Scandinavian rounds in 2017.

And at the end of the event, the Circuit Safari, featuring cars from Super GT, Super Formula, the Nürburgring 24H, and Super Taikyu on track at the same time as buses carrying over 1,200 spectators. The fans even got another special treat as the likes of Hirakawa, Wakisaka, James Rossiter, and Kazuyoshi Hoshino served as tour guides for the event! 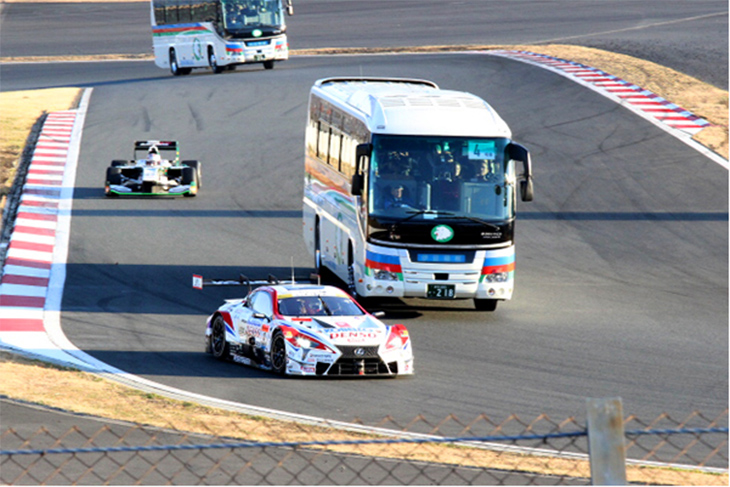 With that, racing season in Japan has concluded for 2017 – and now the focus turns to what lies ahead in 2018, not just for Toyota and Lexus, but for the whole of the WEC, Super GT, and more.

Images courtesy of Toyota and the GT Association