Filipe Albuquerque and Action Express ran fastest on the opening day of on-track action at the Daytona International Speedway in the Roar Before The Rolex 24 Test.

The Portuguese driver’s best lap in the Mustang-Sampling backed DPi V.R from the first two practice sessions was a 1:37.196 set in Session 2.

The second best time of the day was set by Colin Braun, in CORE Autosport’s (stickered up) ORECA 07 Gibson, just over a tenth off Albuquerque’s time in the second session.

Tech inspection underway for #Roar24. First session for @WeatherTech SportsCar Championship rolls off at 11am. pic.twitter.com/3iwxFlqhmH

The top five was rounded out by the Spirit of Daytona, which had a fine first day of running with its brand new Cadillac, making it three DPi V.Rs in the top four, ahead of the #78 Jackie Chan DC Racing ORECA 07 Gibson. The two cars were still within a second of the fastest tour of the circuit.

Elsewhere in the prototype class, there were various happenings to note.

JDC Miller’s ORECA ran for the first time in Gainsco ‘Red Dragon’ colours (above), and ended up eighth with a time of 1:38.832 in the afternoon running, set by Gustavo Menezes.

Ninth in the combined running order meanwhile, was the United Autosports #23 Ligier JS P217 of Phil Hanson, Lando Norris and of course, Fernando Alonso, all three making their Daytona on-track debuts. The trio’s best time came in the morning session; a respectable 1:38.170 from Norris. Alonso’s best lap was a 1:38.602.

Crucially, United’s Ligier – on the public debut of the P217’s ‘Joker’ package – ran faster than the ESM Nissans, Penske Acura’s and Joest Mazdas, as well as a slew of other privateer teams running LMP2 cars.

While all the heavy hitters had their line-ups set heading into Roar-week, there was one late addition, Ryan Cullen joining BAR1 Motorsports.

Its Riley Mk.30 had a tougher time than most, managing just 19 laps across the two sessions, missing out completely on the opening practice. Its best time was a 1:44.792, putting the team 26th overall, and behind six of the GTLM runners.

However, it was an even worse time for the #77 Mazda Team Joest RT24P, wbich failed to make it out in Session 1, and made it out on track, but didn’t set a flying lap in Session 2. The #77 was the the only car in the 50-car field which failed to set a competitive time all day.

The sister car (in video above), also didn’t set a lap in the opening session, due to the team being forced to wait for parts to be delivered. 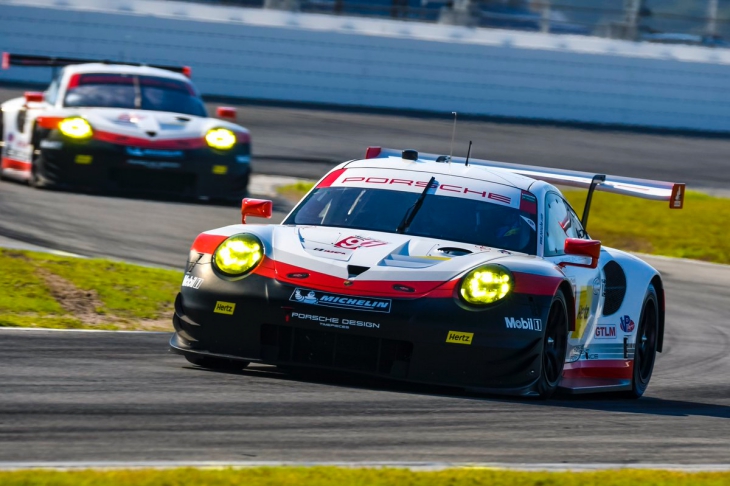 GTD meanwhile, was led by the Grasser Racing Team on Day 1, with its #11 Lamborghini Huracan GTD of Rolf Ineichen, Mirko Bortolotti and newly signed drivers Franck Perera and Rik Breakers setting the pace.

The fastest lap from the quartet was set by Ineichen, a 1:47.104 in the opening session. His lap was just over a tenth quicker than both the Manthey racing Porsche which ended the day second, and the sister #11 GRT Lambo which book-ended the top three for the team.

The Roar Before The Rolex 24 continues tomorrow with the Day 2 action for the WeatherTech teams starting at 10:50am local time. You can listen to all the action live on IMSA Radio’s dedicated online feed for free HERE.