After Black Falcon led the way in the opening practice session at Dubai for the GT runners, Grasser Racing struck back in Free Practice 3 – the first combined session of the meeting – to put Lamborghini on top.

The team’s best time came from Mirko Bortolotti, who set a 1:59.636 to break the Mercedes dead-lock up front on the far more congested circuit.

Second in the running order this time was the HTP Motorsport Mercedes, which finished up third in the first session, Indy Dontje again setting the car’s fastest time – a 1:59.835, topping the A6 Am division.

The remaining positions in the top five were also filled by Mercedes AMG GT3s, which at this stage, looks like the car to have in the heat at the Dubai Autodrome.

Despite it being dominated almost exclusively by Mercedes up front, in the A6 Pro and Am ranks, it was a tight session, the top seven separated by less than a second.

Elsewhere, the GT4 class was topped by the #268 Technology BMW M4 GT4, the new car setting a 2:11.075 courtesy of Frenchman Michal Fabien, the time almost seven tenths clear of the rest of the class runners. The top three was completed by the #84 Winward/HTP Mercedes and Black Falcon Mercedes. 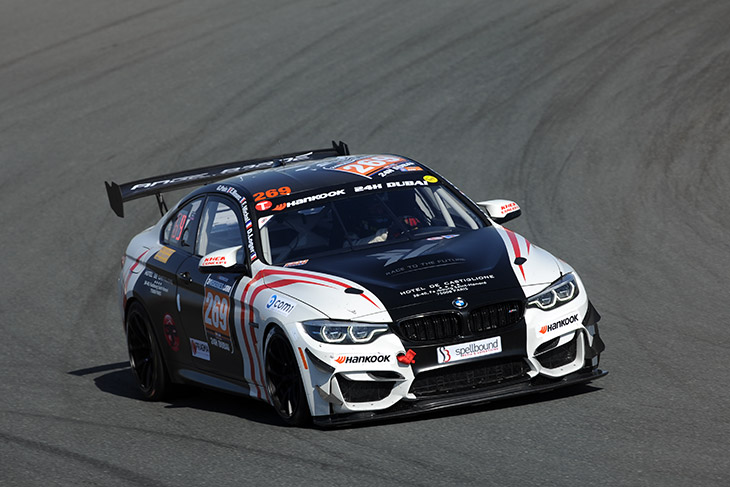 And in the TCR ranks, the Stanco & Tanner Motorsport Seat Leon again set the pace, with a 2:14.132. The time was only just faster than the team’s nearest rival though, the LMS Racing Seat setting a time just 0.032 off the best time.

While Free Practice 1 and 2 saw few notable incidents, there was a bit of drama concerning a front-runner to report in Free Practice 3. 2017 Dubai 24 Hours winner Herberth Motorsport was forced to skip the session due to an oil leak in its 911 GT3 R, which resulted in a total of 12 mechanics working on the underside of the car for much of the running.

The first two Code 60 periods of the meeting also happened in FP3, the first for a car stopped on the pit straight. The session also had to be red flagged two minutes before its conclusion, due to the #62 Fac Tech Auto Porsche stopping at the end of the pit lane.

Next on the timetable is Qualifying at 16:00 local time, which can be live streamed HERE.