The sun has risen at the Dubai Autodrome, and with that the final stretch of the 2018 Dubai 24 Hours has officially begun. After 18 hours of racing, it’s Black Falcon that is in control of things, holding a 1-2 atop the rankings with its #3 Mercedes AMG GT3 leading the #2.

As it stands Manuel Metzger is aboard the leading car, and easing away from Gabriele Piana in the sister #2 car, the gap between them a single lap.

The nearest competition is the leader in the A6 Am category, the #25 HTP Motorsport Mercedes, which has had a metronomic run thus far, making it a 1-2-3 for the Stuttgart-based brand.

Mercedes’ dominance up front has been caused by other contenders falling by the wayside rather than raw pace.

Between hours 12 and 18, three key A6 runners hit trouble and are now on the outside looking in, on the overall podium front.

The first of those was the #777 MS7 WRT Audi, which has dropped to sixth, and eight laps down after braking issues, as well as a 48-second penalty for a pit-lane speeding infraction. It’s a great shame after the Belgian team, its effort entered under the Saudi flag had been Audi’s sole hope of an overall podium for much of the first half.

The #12 Manthey Racing Porsche, which led at the halfway mark, has also fallen back. The team lost its lead when it came in for a brake change, and then lost further time with a hydraulic issue that required attention soon after it returned to the race. It’s now fourth overall, not totally out of it, but third in Pro and six laps off the leader.

Herberth’s Porsche has also dropped further down the order, after its brief upright issue earlier in the race, a steering issue costing the 2017 winner more time, the car now circulating in 19th overall.

And finally, the #1 Hofor Racing Mercedes, in the 18th hour, suffered a power steering issue which has dropped it out of the top 15, and down to seventh in A6 Am.

All this attrition has allowed some of the more consistent, but slower cars to rise up the order. The #18 V8 Racing Corvette C6 is now up to eighth overall, and the #8 Lambda Performance Ford GT3 – on the world race debut for its current iteration – is now an impressive 12th.

The #964 Grasser Racing Team Lamborghini is also now up to fifth overall, still recovering from its three punctures early in the race. The Huracan is now seven laps off the lead, but in with a shout of a podium should further attrition hit the top four. 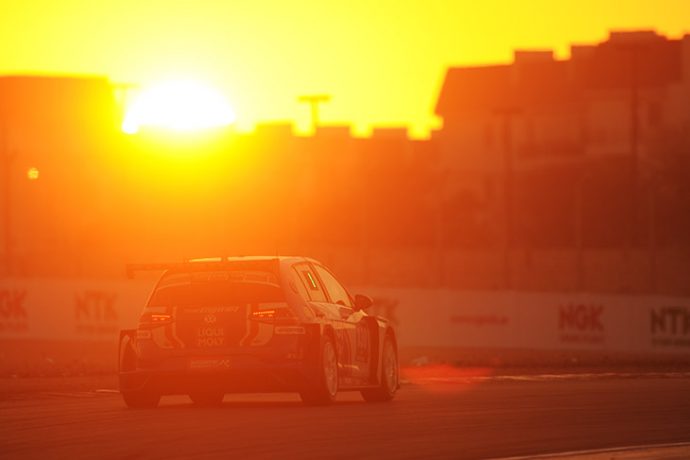 Elsewhere in the race, the TCR class (and TCE race overall) is now led by the Team Engstler VW Golf, by a lap over the #129 LMS Racing Seat, the two cars swapping places in the last six hours. The LAP57 Audi, which had held third in the class until very recently, stopped out on track just before the 18-hour mark. It’s now back out after being towed to the pits, but has lost a heap of time.

And in GT4, the #247 Phoenix Racing Audi has now inherited the class lead from its sister #248 car as the sun came up, the latter R8 LMS GT4 now down to third, behind the Black Falcon Mercedes which is up to second.