Giedo van der Garde will be one of the three Racing Team Nederland drivers in the 2018/19 FIA World Endurance Championship.

Giedo (32) raced in Formula 1 before winning the 2016 European Le Mans Series and making his debut in the Le Mans 24 Hours.

Frits van Eerd, founder of Racing Team Nederland as well as one of its drivers: “I am delighted that Giedo has joined us. He is fast, experienced and highly motivated.

“Our debut in the world championship is a fantastic challenge, so it’s great to embark on it with a driver of this calibre.” 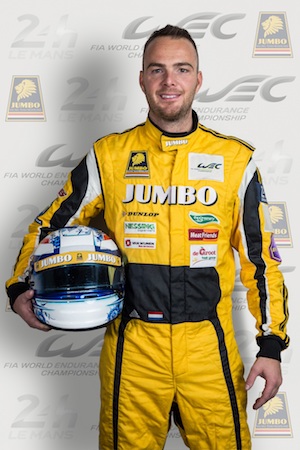 Giedo van der Garde: “I am very happy that Racing Team Nederland and Frits have given me this great opportunity. I like the team’s ambitions and I want to be a part of it.

“The world championship is highly competitive and the Le Mans 24 Hours is one of the greatest races in the world. It will be special to compete in it again.

“The target is that as a team, we will keep improving each other, so that ultimately we can challenge for the podium. I am very much looking forward to it!

“In my first race in endurance racing I became champion, but in the Le Mans 24 Hours we retired on Sunday morning.
Because of my love for endurance racing, as well as the history and romanticism of Le Mans, I can’t wait to start racing for Racing Team Nederland.”

Racing Team Nederland has entered their Jumbo Supermarkets liveried Dallara P217 in the LMP2-class of the 2018/19 FIA World Endurance Championship 2018/19 with their full line-up set to be revealed very soon.