IMSA has announced that the #11 Grasser Racing Lamborghini Huracan GT3 has lost its Qualifying time, after failing the post-qualifying stall test.

The car, driven by Mirko Bortolotti in the session, qualified third in the GTD class with a 1:46.658, but will have to start the race at the back of the grid as a result of the penalty.

Update on P1, ESM and Mazda

P1 Motorsports #71 Mercedes AMG GT3, one of a gaggle of cars not to set a time in Qualifying, confirmed to DSC that it was suffering from a braking issue after Free Practice 2. It was believed to be a master cylinder issue initially, but on closer inspection that part appeared undamaged. So instead the team began replacing the braking control unit, which cost them a chance at Qualifying. 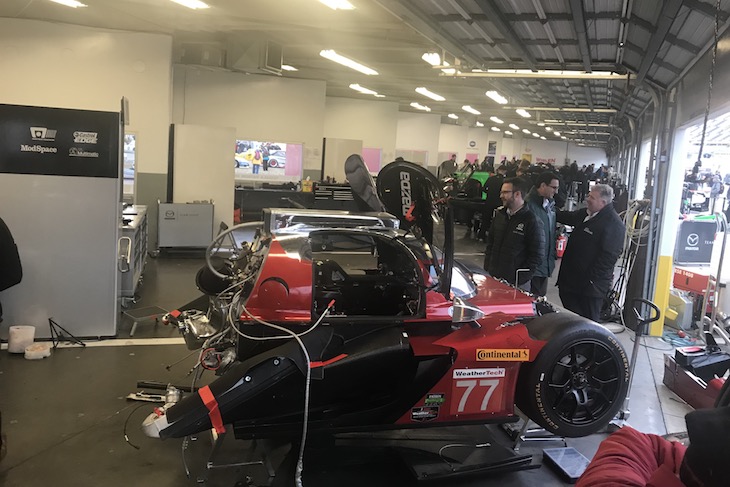 Of the other cars in trouble, ESM is in the process of completing repairs on its #22 Nissan DPi after Nicolas Lapierre’s shunt in Qualifying. The engine change in the #2 car prevented it from running is complete, both cars went out in the night session.

The #77 Joest Mazda though, is still engine-less after the team saw worrying data after FP2. That car is some way from being ready to run.

Brian Alder from BAR1 Motorsport has confirmed to DSC that the #20 Riley Multimatic Mk.30 has the full post-‘Joker’ evo spec parts on it. The team has found a full three seconds of the original car at Daytona. The team is very happy with the support it is receiving from Multimatic. 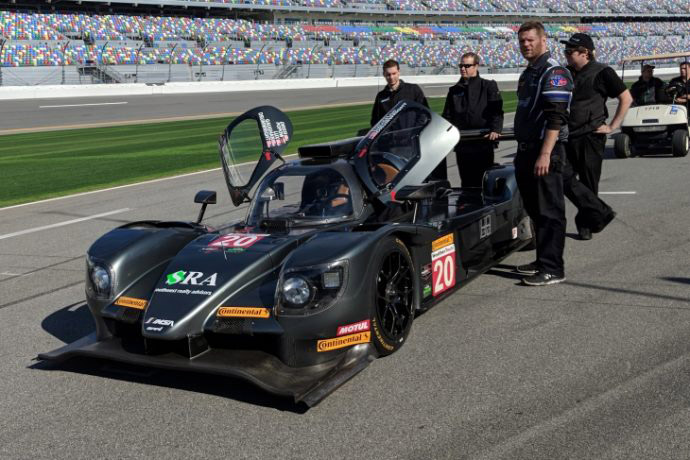 A full interview with Brian Alder will be on DSC in the coming days.

A quick word from Atherton

DSC bumped into Scott Atherton in the paddock yesterday, the IMSA President and COO overwhelmingly positive about the 2018 season. With momentum growing in the prototype ranks and a world-class GT field, he explained that this is the healthiest IMSA sportscar racing has ever been.

“It’s never been like this,” he said. “The atmosphere in the paddock is fantastic between the teams, drivers and manufacturers. To see all this come together is amazing, I’m thrilled, but we are not taking anything for granted.

“We know things like the BoP discussion will come up, but we’re ready.”

2013 FIA WEC GTE Am drivers champion Jame Campbell-Walter is here in the paddock at Daytona, in what has been a long-term driver coaching/mentoring role with Ferdinand Habsburg, driving with Jackie Chan DC Racing this weekend in Prototype. He’s expressing himself as very pleased and highly impressed with the recent progress of his young charge.

“He’s turned a real corner in the last 12 months, very much the real deal. This for the moment is absolutely a one-off drive, but it does give him a chance to broaden his horizons and to understand that there are other high-quality career options for him.

Spirit of Race GTD run a “one off” for Dalla Lana and co.

Mathias Lauda caught up with DSC too, the Austrian not here in AMR green, but instead red Ferrari overalls. 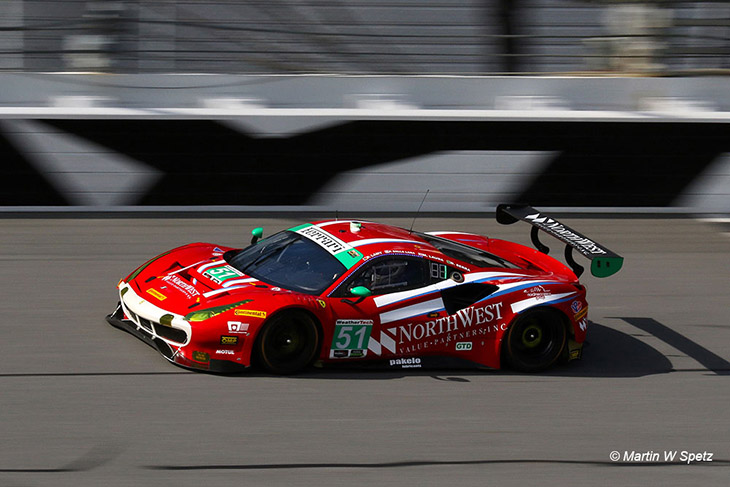 This weekend he’s teamed up with his fellow GTE Am WEC champions Paul Dalla Lana and Pedro Lamy, and Le Mans winner with the British brand, Daniel Serra. He explained that this is a one off drive, and that “we’re with Ferrari because the fee was too high for one Aston Martin.”

Patricio O’Ward, who impressed everyone watching Rolex 24 Qualifying today, when he put the Performance Tech ORECA 07 Gibson fourth on the grid, had no idea how close he was to pole.

The team revealed after the session that O’Ward’s “earbuds fell out, leaving him without ability to hear the pit stand. O’Ward didn’t need encouragement or reminder though; his final lap time was a 1.36.318.”

While it’s both rare, and amusing to see a collection of AMR drivers step out of a Ferrari (see above), it’s just as rare to see a collection of Ferrari factory drivers step out of an eco-boost Ford! But DSC saw that happen today while collecting its full-season IMSA creds, when James Calado and the other Ferrari factory drivers turned up in a white Ford Mustang.

“That’s mine,” Calado said to DSC, “we’re all in Mustangs except Davide (Rigon), who’s in a Kia! They’re fun cars.”

Juttner on his return to Daytona

Ralf Jüttner was watching on with interest as his Mazda team Joest crew was fettling the pair of Mazda RT24-P DPis ahead of the start of track action tomorrow before the 2018 Rolex 24 Hours of Daytona. 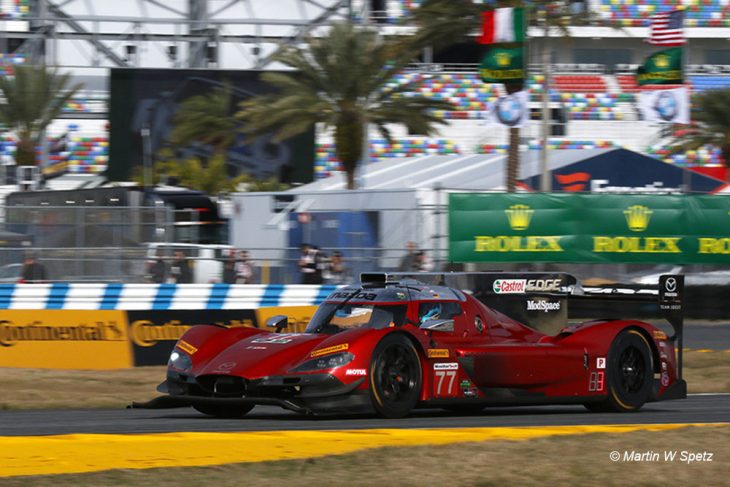 The cars have not tested since the Roar test earlier this month where both cars had reduced running.

Perhaps surprisingly this is only Ralf’s second time involved directly in this race.

“I was here in 1993 with the FAT Turbo-backed 962s and neither finished. Joest have raced here other times of course but I was never with them here apart form on 1993.”

And realistic expectations for the new Mazda Team Joest effort in 2018?

“Better than my last time in this race,” came the lightning fast response!

Question of the day

Of all the press conferences in the media centre today, the best moment came during the United Autosports gathering, where Fernando Alonso was asked by IMSA Radio’s Joe Bradley: “Are you looking forward to being woken up during the night and asked to perform?”

“It’ll be the first time!” Alonso chuckled. “I will see how I can perform at that time of day! But I’m definitely looking forward to it. I’m excited for the race, it’s the first 24-hour races in go-karts but that was amateur level.” Springer meanwhile, went on in 2002 to finish a close second in the FIA GT Championship, paired with the aforementioned Jamie Campbell-Walter!

Le Mans not on Stroll’s agenda

Williams F1 driver Lance Stroll has revealed that a run at the Le Mans 24 Hours is not currently on his radar. The Canadian, who is due to begin his second F1 season with the British team this year, will drive with Jackie Chan DC Racing in this weekend’s Rolex 24, and feels he won’t be able to fit the French endurance classic into his schedule.

“I’m pretty busy with F1 at the moment,” he told the media today. “There’s 21 races on the calendar this year and I don’t want to extend my schedule to 22 weekends. Racing at Daytona makes sense because it’s the off-season and I have time on my hands. I think I’ll put Le Mans on hold and focus on F1”

In the wake of today’s announcement that Keating Motorsports will be teaming up with Risi for a Le Mans GTE Am campaign, DSC spoke to the team to ascertain whether a parallel GTE Pro entry would be submitted. It was met with a noncommittal response, a team spokesperson confirming that DSC should not assume an entry would not happen, implying that a final decision was imminent.

You can follow tomorrow’s CTSC race live (which starts at 13:00) on IMSA TV, as well as the full Rolex 24 Hours (beginning at 14:40 on Saturday), with commentary from the IMSA Radio team.