The former Formula One driver with 229 Grand Prix contested, including 19 podium finishes and 3 Grand Prix wins as well as two-time class winner at the 24 Hours Le Mans with Ferrari,

The Italian driver made his GT racing debut in 2010, driving a Ferrari lined up by AF Corse in the Le Mans Series and since then has always been part of the Ferrari drivers for GT competitions. He raced for full seasons in the FIA WEC for AF Corse in both 2012 and 2013. The coming season will see his debut with the Spirit of Race brand.

Thomas Flohr and Francesco Castellacci have raced together since 2012, Swiss businessman Flohr started his international racing career for Spirit of Race in 2013 and since then has raced in the Michelin GT3 Le Mans Cup, ELMS and in a full 2017 season in the FIA WEC.

Francesco Castellacci began his racing career in 2002 and since then has raced in Formula 3, Porsche Supercup, GP2, Formula Renault 3.5 Series and the FIA GT3 European Championship.

His racing highlights include the European FIA GT3 Championship in 2011, ELMS Vice-Champion in 2015 and the Blancpain Endurance Series Pro-Am Vice Champion in 2014 all with Ferrari GT cars.

Fisichella replaces Miguel Molina in the GTE AM effort, the Spaniard confirmed for the AF Corse Le Mans effort in GTE Pro.

Giancarlo Fisichella: “I am really excited to be joining Thomas, Francesco and the whole Spirit of Race family. The FIA WEC is one of the most thrilling and competitive series in the world and I’m very much looking forward to a successful season in this strong team. 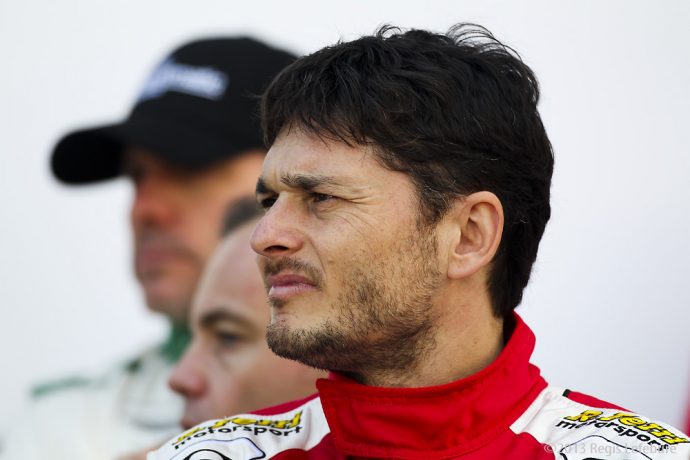 “The new Ferrari 488 GTE has been fantastic to drive during the pre-season practice and it’s going to be really exciting to get the most out of it in the fight on track!”

Thomas Flohr: “Having Giancarlo joining us is fantastic news for the team and I can’t wait to start the season competing alongside him. Last year we made some excellent progress as a team, with the highlight being the win at Fuji, so I’m hoping that with Giancarlo’s support we will be able to go on to even greater success!”

Francesco Castellacci: “It’s a real privilege for me to be competing with one of the greatest Italian drivers of the last two decades. I’ve always looked up to Giancarlo as an icon in the world of motorsport and I can’t wait to achieve some great things with the Spirit of Race this season. Bring on the first race!”