The initial testing of the new Ginetta G60-LT-P1 progressed this week as the Ginetta test and development team, joined by the CEFC TRSM Racing squad, joined testing at Motorland Aragon for a planned three-day session.

The GINETTA… What a car!!

The new Ginetta then shared the track with the first of the SMP Racing BR1 AERs and the revised ByKolles CLM.

Prior to its Aragon running the car had been shaken down over several days at Leeds East Airport where the car undergo substantial straight line running, the team undertaking extensive systems proving tests.

The first circuit action came with a single day at Snetterton, the car’s first circuit running.  The early year UK weather though wasn’t kind, it would be at Aragon that the car had its first dry weather circuit mileage. 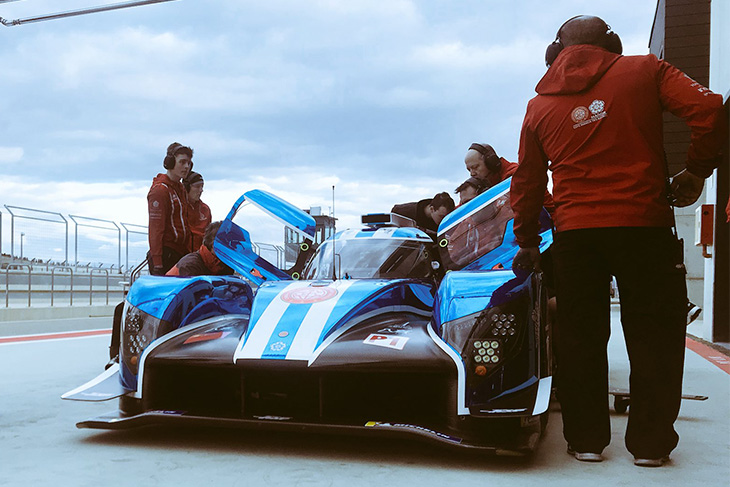 Both drivers named at the WEC and Le Mans 24 Hours entry lists, Charlie Robertson and Oliver Rowland are understood to have had running in the first two days, Ginetta Technical Director Ewan Baldry telling DSC that whilst he wouldn’t be drawn on lap times, “We’re all absolutely delighted with progress at this point.”

Trackside observers though have reported (track timing screens were active for the test) that the Ginetta put in an early lap in the very low 1:19s with the refettled CLM in the mid 1:19s and the BR1, now well into its test cycle, in the mid 1:17s. One source suggests that the CLM managed a lap in the 1:18s, though without a transponder fitted.

Local sources in Spain suggest that the Toyotas were putting in 1:18s on long runs at their last visit to the Aragon track.

The test at Aragon marks the first full run for Graeme Lowdon’s Manor team under the TRSM banner, in addition to its first appearance as an LMP1 team. 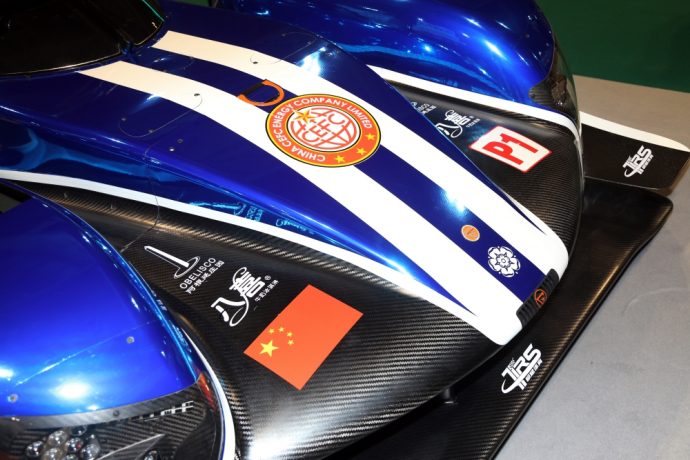 This year, the team has undergone a name change from CEFC Manor TRS Racing to TRSM (TRS and Manor), with continued backing from the CEFC organisation.

For those unaware of CEFC and TRS, they’re two elements of the team which provide real punch both financially, and in visibility terms for the outfit, mainly in the massive South East Asian market.

Founded in 2002, CEFC is now one of the top 10 largest private companies in China and a fortune 500 company. It’s a collective enterprise which employs over 30,000 people, with energy, financial services and general investment its core business. In Asia, it’s an extremely powerful enterprise, its revenue exceeding RMB 263.1 billion (£27 billion) in 2015, making it one of “the World’s 500 Most Influential Brands, and top 10 Most Internationally Competitive Leading Chinese Enterprises”.

The sporting side of CEFC falls under the investment arm of the business, in addition to its ties with the TRSM LMP1 programme and former Manor WEC LMP2 effort, CEFC also owns SK Slavia Prague, the Czech Republic’s most successful football team.

TRS (Talent Racing Sports Ltd), meanwhile, is another private Chinese company, which focuses closely on motorsport. TRS’ aim is to promote motorsport events in China, and is responsible for introducing CEFC to the sportscar scene.

As well as testing its new G60-LT-P1 at Aragon with Oliver Rowand and Charlie Robertson, the CEFC TRSM squad are also known to have had former F1 ace Robert Kubica on site, the Pole looking to try out LMP1 for a second time after his test with ByKolles at the 2016 end of season Rookie Test in Bahrain.

Talking to DSC, Baldry wasn’t to be drawn either on the question of whether Robert Kubica was part of the test though again local sources suggest that he is present, but has not had any significant running as yet 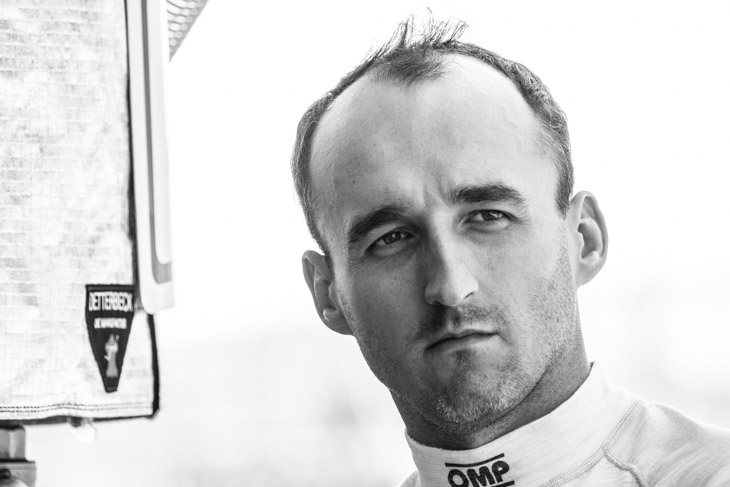 It’s not yet clear whether or not Kubica will sign up to compete with TRSM this year. He was due to compete with ByKolles in 2017, following his outing in the Middle East, but opted to sit out the season at the last minute.

In addition to the LMP1 Privateer teams testing in Spain, their factory competition has been ramping up its pre-season preparation in Portugal.

In what is Toyota Gazoo Racing’s third major test of the year, following its two runs at Aragon last month, the Japanese manufacturer is in the midst of three days of running in the sunshine.

During the three day test, Toyota explained to DSC that it completed a 9am to 5pm development run on Monday, before embarking on a 30-hour test starting on Tuesday morning, running through till this evening. It’s a copy of the format Toyota ran at the end of January in its second Aragon test.

All six full-season drivers are in attendance for the team, as well as its newly named reserve driver Anthony Davidson. It is notable that this is Fernando Alonso’s second endurance test with the team, the Spaniard racking up as much mileage as possible prior to Le Mans.

A Toyota spokesperson also detailed the purpose of the test, giving a little more insight to DSC: 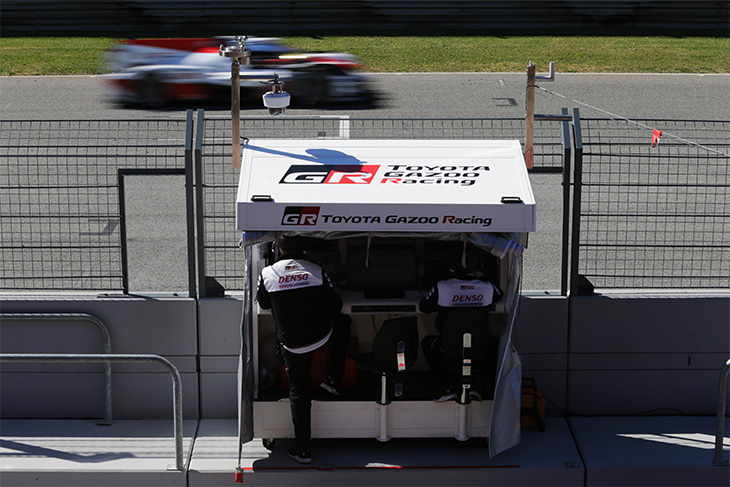 “We put various components through their paces during an endurance run and getting the pit crew into a good rhythm (especially considering the new pit stop regs) we have been simulating various unexpected situations. This means various technical issues on the car, whether it’s implementing a strategy to get the car back to the box in case of a specific problem and/or practicing the actual repairs.

“That’s a big new focus for us this pre-season as we try to cover all bases. We did get a genuinely unexpected problem when we lost an hour of the test due to a drain cover coming loose around the track. The test has gone well so far.”

The first confirmed picture of SMP Racing’s second BR1 LMP1 has been released, the Russian team tweeting pictures of its stand at the Salon International De L’Automobile De Monaco.

This confirms that both SMP’s LMP1 chassis exist, as its other chassis is out testing in the aforementioned Aragon test. DSC understands that BR1 LMP1 chassis #3 is set to go to DragonSpeed for its Gibson-powered LMP1 effort.

Manfredi Ravetto has joined ByKolles Racing, and become its team principal ahead of the 2018/19 FIA WEC ‘Super Season’.

The 42-year-old Italian has plenty of experience at high-level motorsport, including other Colin Kolles projects in DTM and F1. Notably, Ravetto played a part in the storied Caterham F1 Team’s demise, a story well documented by Racecar Engineering back in 2014, which is a must-read.

This year ByKolles will race with a single revised CLM P1/01, team regular Oliver Webb the only driver confirmed for the programme so far though the Aragon test has seen Tom Dillmann, James Rossiter and Ling Kang also present.

While Rebellion hasn’t been out testing this week, its most recent news concerns its driver crew, specifically, how the driver roster will be split over its two Rebellion R-13s.