It’s always worth paying attention to Le Maine Libre, the local/ regional newspaper for Le Mans usually has its hand on the pulse of goings on chez ACO. 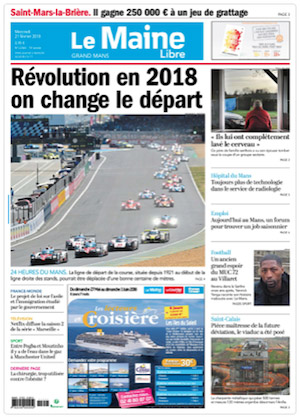 A front page story, albeit written in a somewhat conditional tone, this week is topped with a very French title (“Revolution en 2018”) The online version of the story can be seen – en francais – here.

The story suggests that the start line for the Le Mans 24 Hours, which has been in its current location since 1921, could be moved up 130 meters towards the Lagache grandstand “for a greater comfort of the spectators” (whereas today, it is between the Tavano grand stand and the race directors tower). It is also, according to the article, a means to get more cars in photographers’ shots when the race starts.

Whether or not that change happens it seems that the finish line stays where it is. At the foot of the podium tower / Rolex clock, a second (very) minor race distance adjustment after the tiny change at the Porsche Curves completed over the winter?

The article also indicates that a sponsored arch would be erected at the location of the new start line, the ACO clearly keen to ‘sweat’ their asset in the wake of the Audi and Porsche LMP1 withdrawals in the past two seasons.