Tomorrow the Continental Tire SportsCar Challenge field will take on Sebring for round two of the 2018 championship. This year, its grid, as ever, is healthy, packed with aspirant teams, especially in the booming GT4 ranks, which features 27 cars.

To find out more about what it’s like in the CTSC paddock, DSC put some faces to names, and sat down with McLaren GT4 customer team Motorsports In Action’s owner Eric Kerub (formerly the president of TAG Aeronautics, whose parent company TAG Group holds a stake in McLaren), its crew chief Car Hermez and both its full-season drivers, Jesse Lazare and Corey Fergus.

In what turned into a full-on 30 minute discussion, DSC found out more about the inception of the Canadian team’s GT4 programme (now into its second year), the hopes and dreams of its drivers and what the plan is for the future.

So without further adieu, here’s the full interview:

Let’s kick this off Eric, tell me about this programme and what’s it like running in IMSA from Canada, travelling across the border for almost every round?

EK: “It’s a big source of pride for us, flying the flag for Canada, along with Compass Racing, which is also based in Canada and races with McLaren.

“We aren’t based in Europe, but that doesn’t mean we didn’t explore all our options. Our crew chief had experience of IMSA, working in CTSC, so when this programme started I was made aware of the series, how they were growing and how GT4 cars were being introduced in 2017. McLaren introducing their 570S GT4, and with my relationship with them, it all made sense. 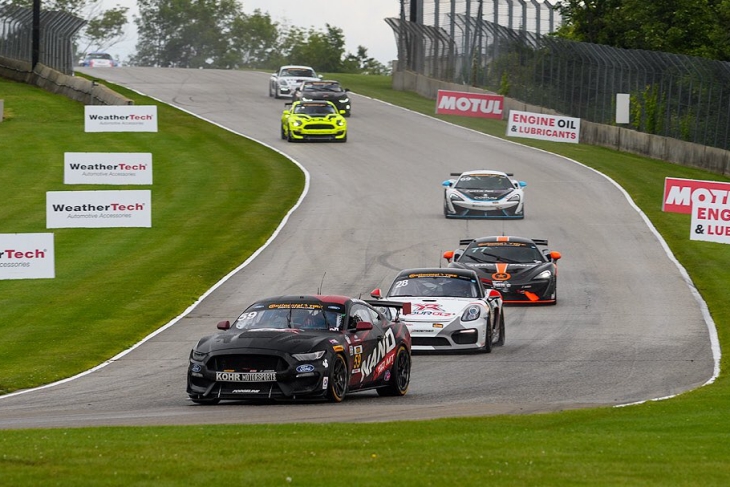 “It was a perfect storm, the series was great and the brand I wanted to race with had a car for the platform, we had our star driver (Jesse) here who mopped the floor with everyone in Porsches the year before.

“We also had Chris Green last year, who is a national brand manager for McLaren on board and he won the Canadian Porsche series too.

“It took some convincing though, Jesse came from winning everything he’s ever done from karting to racing in Porsches, to driving with a new team, that had never raced before, and on a new platform.

“There were question marks, and it took faith in us.”

There are plenty of options out there now for GT4. What was it about CTSC in particular that drew you in, why not PWC?

CH: “Diplomatically, I feel that the manufacturer involvement in CTSC is what puts it above PWC. The competitivness of the drivers too, the crowds, coverage, the package all together. I haven’t been in a PWC paddock, but from the outside perspective, the IMSA programme seems to be a lot more professional and competitive for young drivers like Corey and Jesse. That’s the reality.

“When you’re driving with young drivers, that have talent, they want to race here, where there are big factories watching. That’s not to knock PWC, but we’re here because we want to go endurance racing, and this is more fun and engaging.

JL: “Also when you do longer races, it’s great for the whole team, so rewarding. Sure we get a lot of track time, but because we have hot pit stops, the mechanics get involved. Which is great when we accomplish something, because we did it together, and we all pitched in.” 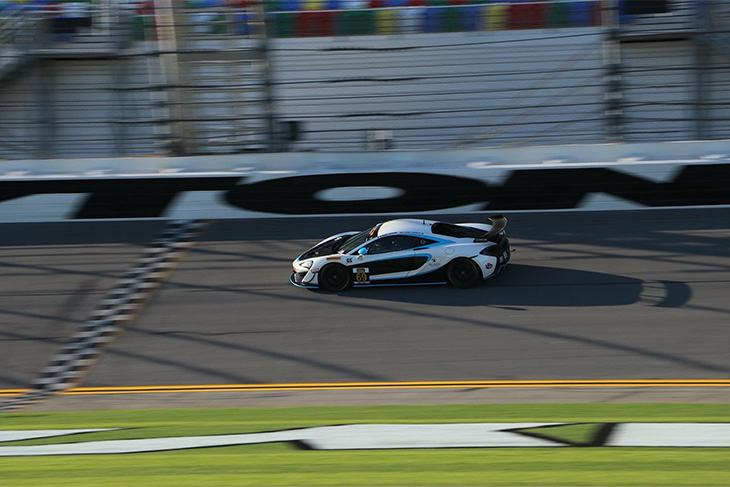 CF: “Yeah, it feels a lot more special to run in say a two hour race, or a four hour race, than a short sprint. It’s more entertaining.”

How do you feel about Balance of Performance in CTSC? With so many new cars now, it’s such a task to get it right.

EK: “We progressed last year, we had purple times everywhere, so we are confident, with the platform, with the car. We have to work with the series on BoP, especially with new manufacturers this year. They’re juggling a lot this year, but they know what to expect from the McLaren. They didn’t want to jump to any conclusions, because Daytona was always going to be a tough race for us. But for Sebring we should be where we need to be.”

“These cars are homolgated to SRO, and they have proceedures. Every series with track specific situations, they analyse data and come away with new Balance of Performance. But the McLaren seems to be a bit too heavy, we hope that gets sorted, they have time to analyse everything.”

So with that in mind, what is your level of expectation this year?

EK: “There’s only one goal, I’m here for the championship. There’s nothing else. I do want to run a business, I want to run arrive and drive cars, and to be competitive and safe, that’s what we will offer anyone who wants to drive for our team. However, in this particular case with our #69 car, we want to win the title, we’ve got Jesse to come back, and Corey on board, who was Vice Champion of last year’s Porsche GT3 USA series.

“We’re confident because we think the car will be better at the other circuits, especially with the other tyres, as at Daytona there’s a one off tyre, which is a much harder compound, and we struggle on that. The other compound is much stickier and works better.

“I’m invested in this, these aren’t just drivers that bring all the money, I want this too, I invest in this, so being in contention for a title is what I expect. I want to see what we had towards then end of last year where we were winning and fighting for wins post Daytona. If Sebring let’s me down it’s a different discussion!”

Let’s hear from the drivers now, Jesse first. You were with the team last year, tell me what it was like getting to grips with the 570S GT4, which is still one of the newer GT4 cars out there?

JL: “Before last year, I hadn’t driven a GT4 car. I joined the team, which is based out of the same town as I am, because I got know the owner Eric Kerub. It all made sense, as right from the first test I knew the car was good, it’s very well balanced, the brakes are good, the power delivery is spot on and just as a team, we improved at every race.

“What’s great about the McLaren is the carbon fibre tub, because as the tyres go off the car kept its balance, which is so valuable over longer stints, it was an advantage. It’s also a very safe car.”

Now Corey, tell me about your experience so far, and the step into 2018 with Motorsports In Action, how much running did you get prior to Daytona in the car?

CF: “It’s a lot of fun, I’ve raced in GT3 cars and cup cars, so I have relevant experience from the GT side. You combine what you’ve learned there and put it in a GT4 car and it’s not too hard to get up to speed.

“Really, the shock has been the driver aids, I’m not used to having so many of them, with traction control, ABS, roll up windows, air conditioning, there’s a lot and very different to a Cup car.

“We tested at the Roar, and I got in the car for the first time there, and from the first lap I turned, I felt comfortable. ”

With IMSA growing across the board, just how important is it to be racing in a series like CTSC, and get yourself into this paddock?

CF: “It’s a crazy paddock, I was really working hard to find a way back here this year, because there’s so many big teams and manufacturers, it’s the pinnacle of US motorsport. This is definitely the place to be. If we can do well, it shows that we are capable drivers, and it will further your career.” 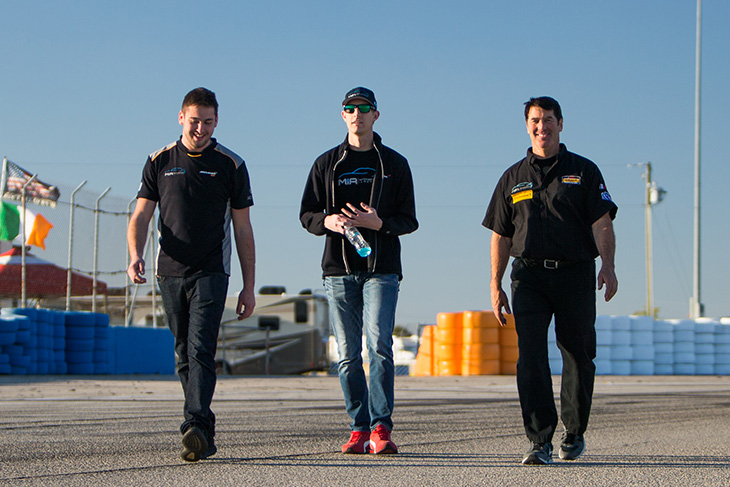 Looking to the rest of the season, beyond Daytona, after your experience last year, where are you most looking forward to going, and which circuit do you think suits the 570S GT4 the most?

JL: “It’s gotta be Mosport, it’s just so incredible, the corners there, the speeds you reach, it’s a big balance. I’ve never had so much fun. I love fast tracks with elevation changes, they’re like nothing else in a GT4 car. We just need to capitalise, and we’ll be there at the end of the championship.”

You mentioned running arrive and drive cars, and the commercial aspect of this team Eric, what will it take to get your second car on the grid again?

EK: “We’re a McLaren customer team, we have the service, the cars, the engineers, the equipment, we need to fill it in with money. Outside of my championship-driven effort with the #69, I want to give anyone the chance to win, I’d be just as happy for another pair of drivers to come in and win races.

“We want to maximise our potential, we have people that are looking to join, but the trouble is that they’ll look at Daytona, and the results there, and that’ll make it tough. I don’t think I can fill a second car after Sebring, without luck.”

Finally, let’s look beyond this year. What’s the end goal here, is this an operation focused on becoming a big player in CTSC or is there more places you want to go?

EK: “When I sat down with Carl, and we discussed this whole programme, and aim, we came to the conclusion that we want to end up with the big boys in WeatherTech. We have a three-year plan to run in CTSC, and then after that, step up into GTD.

“The budgets in that have grown astronomically though in the past two years. It used to be 2.5 million, now it’s 4 million just to be there. I’m hoping there’s some adjustment, that’s where I want to be though.

“I raced with McLaren 12C GT3 Can Am and a 650S GT3 in club races, and I know that they’re proper cars. GT4s are nice, and good for pro-am drivers that are developing, but the 570S GT4 to me is still a street car, GT3 is proper, full blown.

“I think with the talent we have in the team, we have the expertise to do it properly. The plan is there.”