Andy Meyrick’s Tweet last week expressed rather extreme approval of the Bullitt Racing team’s new Mercedes-AMG GT4 and its full season livery (above), a pair of which will be fielded for the GT4 European Series.

Andy’s right, the team have come up with a stunning look for their new for 2018 weapons!

Las Moras Racing by Equipe Verschuur have revealed a striking all new livery for the McLaren 570S GT4 it will race in this year’s GT4 European Series. 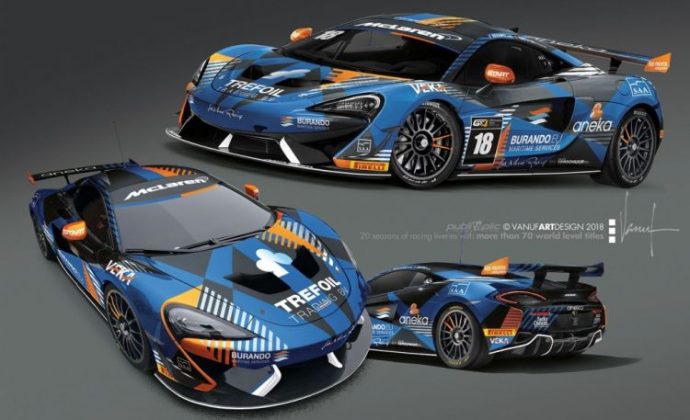 “The new livery is exactly what I wanted it to be.The black and blue colors are matte, as I really liked that. I’ll be testing the car one more time later this week, without its new livery, and then it’s time for the ugly duckling to turn into a beautiful swan.”

Braams also confirmed Van Laere as her teammate for the 2018 GT4 European Series. The two drivers shared the McLaren at the official test day at Zolder earlier this month.

“Sven and I can’t wait for the season to begin. He knows Zolder and Spa and provide me with some useful tips and I can help him at other circuits. Brands Hatch is new for both of us.” 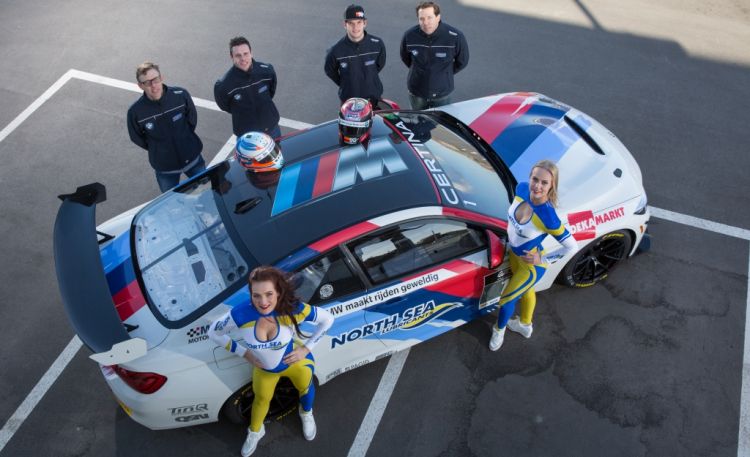 “We have some years of experience in the GT4 series in which we have had quite some success, but this is the first time for us as a team to run our own cars in the series,” said MDM Motorsport’s Dennis Bus. “We have worked with Max and Simon before so we will build on that this season. The BMW M4 GT4 is a fantastic new product by BMW Motorsport with which we will be able to shine.”

“Of course, I will try to defend my European title. Moreover, I will try to score as many points as possible for the BMW Sports Trophy again,” Koebolt said.

“With Max as my team-mate and with the strong MDM Motorsport team, we have a good package to do our utmost to race at the front of the field,” added Knap, who returns after a one-year international break.

The team’s second car will be entered for Koen Bogaerts and Mark van der Aa. The two drivers raced together in a number of championships and won the Supercar Challenge title with BMW back in 2015.

Van der Aa and Bogaerts will enter the GT4 European Series with limited experience in the BMW M4 GT4, but they look forward to this new challenge. 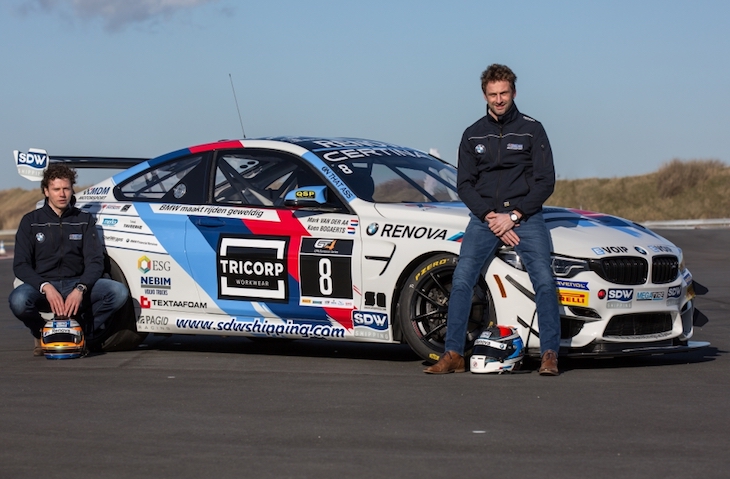 “Preparation is limited to one day of testing only, so we don’t have a lot of time to get used to the car. On the other hand, we have some experience and MDM Motorsport is a top-level team, so we hope to be up to speed quickly,” said Van der AA. “Given the size of the field and the presence of many experienced drivers, our initial aim is to make it into the top ten.”

“We have quite some experience, but being able to race in such a major championship is new to us,” added Bogaerts. “With well over 40 cars on the grid, it will be far from easy, but we are eager and have no lack of ambition to show what we are capable of at this level as well.” 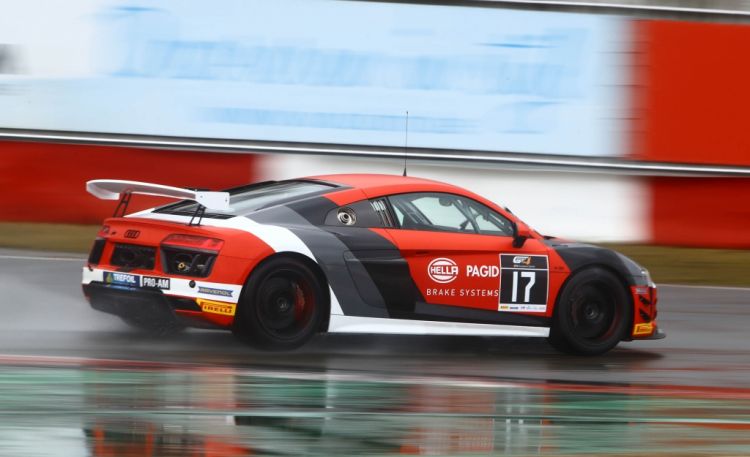 Lungstrass and Owega will race together and already tested the Audi R8 LMS GT4 together on several circuits, including Zandvoort and Zolder.

“The GT4 European Series is for me the most important series besides the Blancpain. That’s why I think now is the moment to enter this fantastic series,” said Lungstrass.

“We race in a Audi because its known to build and create very good GT cars and the Customer Sports Program is one of the best. I’m really looking forward to drive with Hamza because he’s a fast driver and did a really good job the last years on the Nordschleife.”

Teammate Owega will make his debut in sprint racing, having competed in the German VLN series in the past couple of years.

“The GT4 European Series is my first season in sprint racing. After two seasons in VLN I wanted to see something new,” said Owega.

“I will give my best and I think that I can learn a lot in this series. It’s very cool to drive together with a friend and on the other side with someone who has a lot of expierence in GT racing. My goal is to develop my skills and gain from his experience as much as possible.”

Their teammates Zamparini and Mór have more experience in the GT4 European Series. Mór raced a McLaren 570S GT4 in 2017, while Zamparini drove a Maserati GranTurismo MC GT4 in 2016.

“I’m simply excited to start this new adventure. I’m sure with Csaba we can do very well, he did show great improvement and performance during the last seasons,” said Zamparini.

“It will be very competitive and challenging, but that gives me even more motivation. It’s the first time I’m crossing the border to race with a new team and manufacturer, I’m just impatient to start as everything looks amazing.”

“Last year I learned that this series is not a one man show. To book success everything needs to be complete. That’s why I’ve chosen for racing one because in this team we have the package with a very strong teammate Zamparini, the brand-new Audi R8 LMS GT4 and a motivated championship winning team,” added Mór.

“We will race with starting number #77. This number is special for me, because it was my first car number when I started a race. This car won all the races in the Lotus Cup championship in 2016. I am sure this number will be on the top too in an upcoming, high level of GT4 racing season in 2018!”

Martin Kohlhaas, racing one’s managing director: “With the lineup of Markus and Hamza we have a perfect match for the PRO/AM championship. I have a lot of confidence in both of them for a good season with success,” Kohlhaas said.

“With Csaba and Patrick I think we have a second Pro-Am couple to go for the podium. With the lineup finally complete the season can now start.”

The Audi R8 LMS GT4 of the Riviera Motorsport team will be driven by Julien Goujat, boss of the team and pro driver Antoine Leclerc. 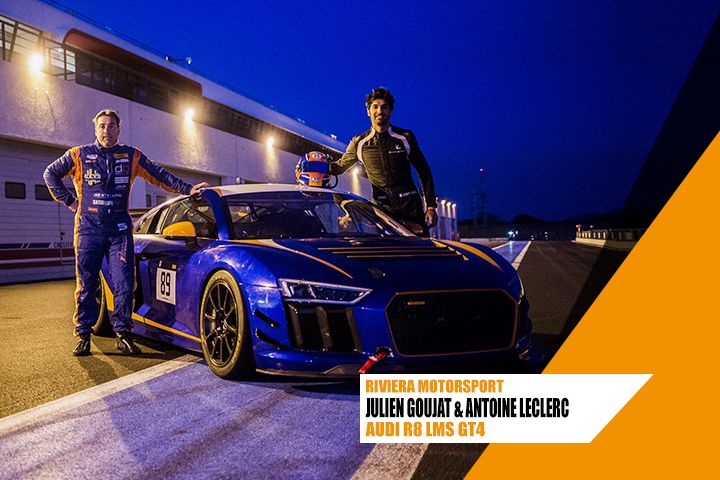 Antoine Leclerc: “The French FFSA GT Championship revives the colors of the GT in France. I am delighted to race again, it reminds me of the exciting seasons that preceded my title of champion of France in 2008. The collaboration with Julien and the whole Riviera Motorsport team is very interesting. Professionalism and energy to do things well I like!”

Julien Goujat: “It is with emotion that I find the FFSA GT where I made my first steps as a Riviera Motorsport team manager last season. This year, the excitement is at the rendezvous taking place behind the wheel of the Audi R8 GT4. I am delighted by the collaboration with Antoine Leclerc, a seasoned and professional rider with whom we can only excel. The challenge will be there but should we talk about challenge or pleasure? “.

The team are working hard to add a Porsche Cayman GT4 Clubsport MR to the Audi campaign too.