New to DSC in 2018, as a supplement to our extensive coverage of the Super GT Series, is year-long coverage of the Pirelli Super Taikyu Series, the longest-running pro/am endurance racing series in Japan, founded in 1991.

Races are held over distances from 3 to 24 hours, contested in 2018 by eight different classes of cars, headlined by the ST-X class for FIA GT3 cars, ST-Z for FIA GT4 cars, and ST-TCR for TCR touring cars. Below them are five production-based classes featuring everything from Porsche Cup cars to race-tuned production vehicles.

The big changes for the season, of course, include the first 24-hour endurance race held in Japan for a decade: The Fuji Super TEC 24 Hours, to be held on 2-3 June. And the multi-year deal for Pirelli to take over as the series’ tyre supplier and title sponsor, to which the new Pirelli P Zero tyres are already drawing rave reviews for their durability in testing.

Super Taikyu will also introduce the Full Course Yellow procedure at select races, known as “Zone 50” – 50 as in the maximum speed of 50 kilometers per hour. The classes have been slightly reworked as well: The main three classes of ST-X, ST-Z, and ST-TCR must have at least one “amateur” driver to counter-balance a selection of “expert” drivers, and any team on the grid can now register up to four drivers for every race. ST-2 will now allow both front-wheel and all-wheel drive cars in an attempt to boost participation.

ST-X, Super Taikyu’s premier category, is a category with a vacant crown with the shocking news of ARN Racing’s defection to Blancpain GT Series Asia. 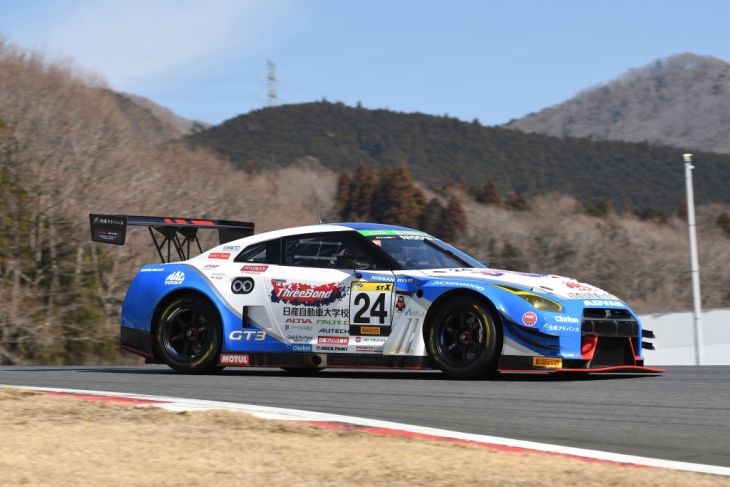 Of the established powers, the three Nissan GT-R NISMO GT3s look poised to retake their championship crown, headed up by 2016 ST-X Champions Kondo Racing, who were fastest in the pre-season tests with ace driver Tomonobu Fujii at the helm. The other two GT-Rs are run by GTNET Motor Sports, who won at Suzuka last year, and another past champion team, Endless Sports. 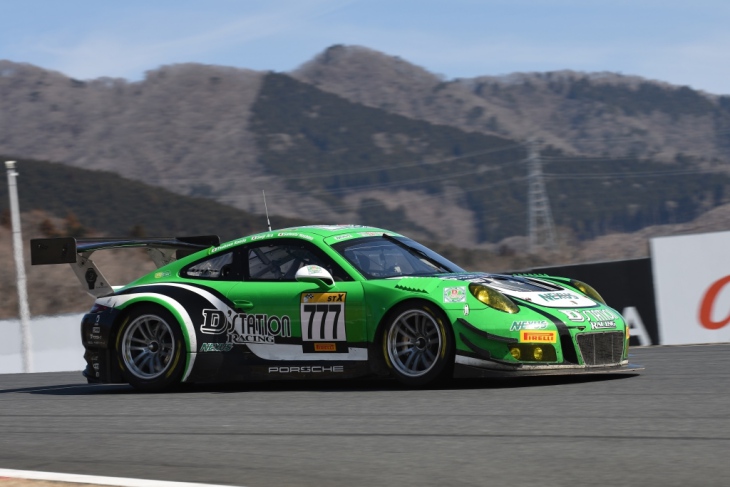 There’s also plenty of excitement around the D’station Racing Porsche 911 GT3-R, returning for its second season with a lineup anchored by 2004 24 Hours of Le Mans winner Seiji Ara.

But a new challenger has emerged already in the form of the trio of Phoenix Racing Asia-run Audi R8 LMS, which are new to Super Taikyu. Already, Marchy Lee’s squad has seen success in sports car racing across continental Asia, and by recruiting veteran drivers like Alex Yoong and André Couto to lead them, along with young stars Shawn Thong and Shintaro Kawabata, Phoenix Racing Asia are poised to make an immediate impact in ST-X. 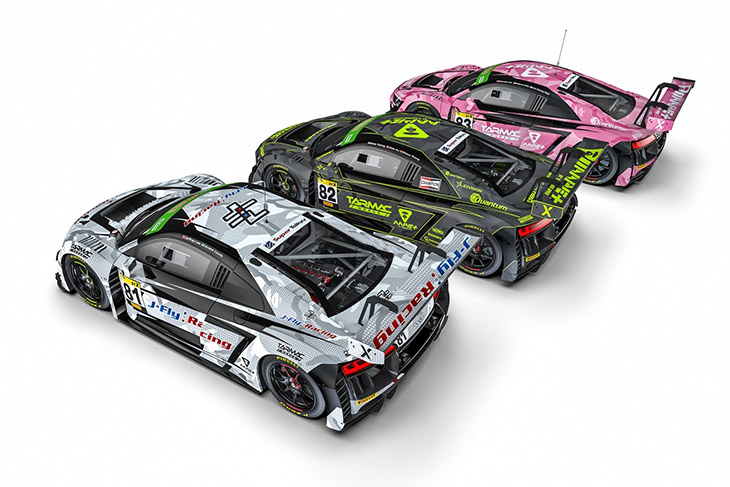 There’s also a new Lexus RC F GT3 from MAX Racing, which are supported by GT300 powerhouse Tsuchiya Engineering, and Rn-sports have purchased a new Mercedes-AMG GT3 to replace their aging SLS AMG.

Unfortunately, the GT4 boom around the rest of the racing world has yet to really take hold in Japan. Just one Porsche Cayman GT4 Clubsport has been registered for the season by Team BEND, and they won’t be at Suzuka, so the ST-Z class, for now, remains vacant.

We can, however, expect a banner grid in the ST-TCR category. Three Audi RS3 LMS, three Honda Civic Type Rs – including two of the new FK8 models – and one Volkswagen Golf GTI, all on the grid at Suzuka. 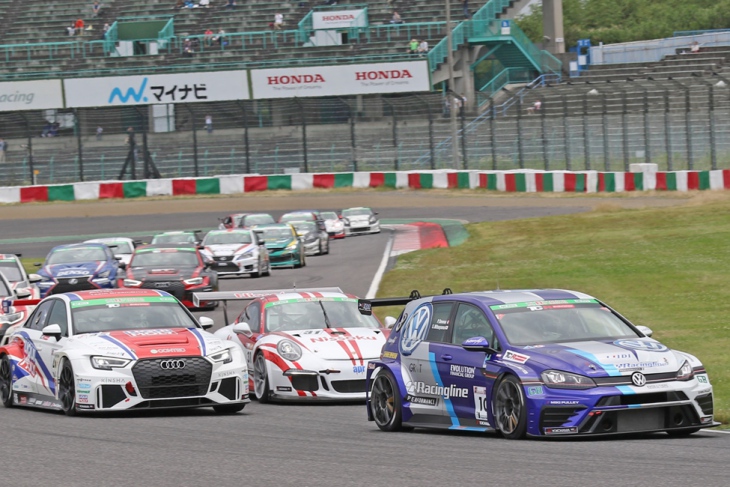 Dome Racing will defend their inaugural ST-TCR titles with their trio of Honda Civics, as will Hiroki Katoh, the only returning driver from last year’s title-winning squad. But the pace of the Audis is still lethal, they were quick in qualifying last year, and again quick in this year’s pre-season test at Fuji, where Adenau’s Golf GTI dominated the class in last year’s 10-hour running of the Super TEC.

ST-1 will start the season with two Porsche 911 GT3 Cup cars from D’station Racing and apr Racing, but apr have already made plans to move up to ST-X with a Porsche 911 GT3-R at mid-season.

The star-studded lineup at Le Beausset Motorsports – featuring Toyota Young Drivers Kenta Yamashita and Ritomo Miyata, make them the favourites on paper. Tracy Sports are the defending champions with their #39 Lexus RC 350.

Down to Group 2, and the lightweight ST-4 class, where the dominant car is still the Toyota 86, which makes up three-quarters of the 12-car entry at Suzuka. TOM’s Spirit and their all-pro driver lineup of GT300 standouts like Takamitsu Matsui and Sho Tsuboi ran away with the championship last year ahead of Endless Sports, led by Ryo Ogawa. Masahiro Sasaki is now in a second 86 fielded by Tatsuya Kataoka’s T’s Concept team, and a new challenger in Hayashi Telempu Shade Racing shows promise as well. 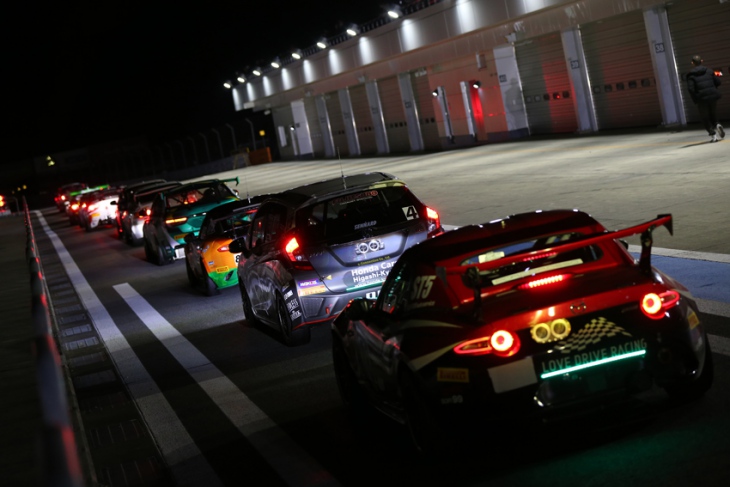 ST-5 has four Mazda Roadsters, four Honda Fits, and two Mazda Demios. Murakami Motors’ bright orange Roadster was the class of the field in 2017, and they look to defend their title in 2018 from the front-wheel drive Fits, led by 2016 champs J’s Racing. Love Drive Racing, run by Keiko Ihara and the Mazda Women in Motorsport project, will once again be a popular entry in ST-5.
In total, 52 cars over 7 classes, entered for this season’s first race at Suzuka – which begins at 12:15 JST on Sunday, with live streaming coverage on YouTube on Super Taikyu TV.