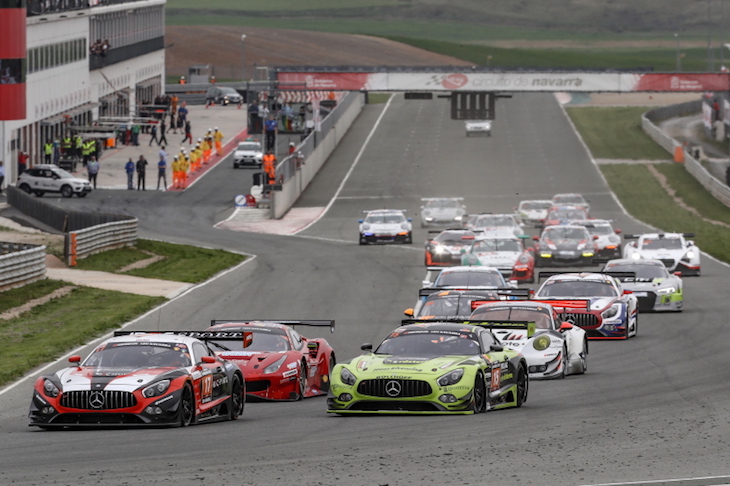 A quick rain shower and contact in the early going had threatened to knock the Ferrari out of contention, but in the end, the Czech-run team was able to cruise to a well-deserved victory on the 24H SERIES powered by Hankook’s first visit to Navarra.

“It was just a great race,” said Malucelli’s teammate Josef Kral. “It looked much easier from the outside than it was behind the steering wheel. But in the end the team did a great job, it’s our first win of the season, and hopefully we can keep up the momentum.”

The Car Collection Motorsport Audi R8 LMS (#34, Gustav Edelhoff / Elmar Grimm / Max Edelhoff) finished three laps behind in 2nd place after a stunning battle for A6-Am honours in the closing half-hour. Having finished ‘part one’ of the Hankook 12H Navarra in the lead, the German-run Audi lined up on pole position for Sunday’s restart grid, never dropping outside the top 10 en-route to its third A6-Am win in four starts. 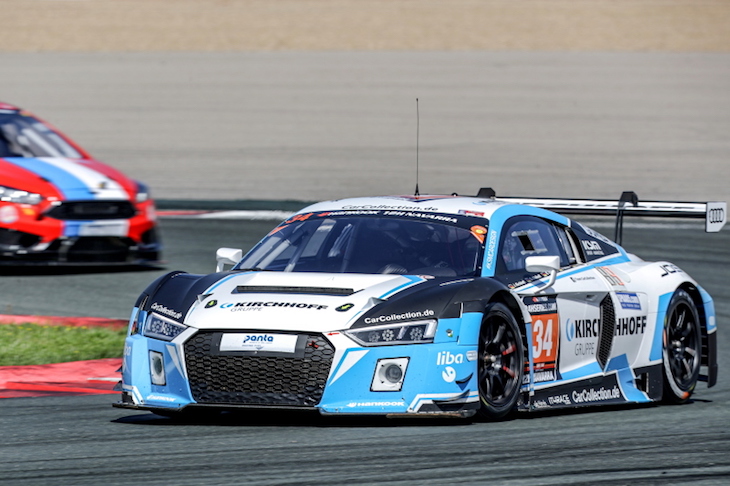 “Max [Edelhoff] was able to push more, but we had no fuel,” explained the young German’s teammate Gustav Edelhoff. “So he just had to save as much as he could for the last few laps. We’re not even sure he’ll make it to Parc Fermé!” He did.

“You can’t get much closer than that!” said driver Charles Espenlaub. “We were amazed [Car Collection Motorsport] could make it that far, and I guess they just had a better strategy then we did, but we’re really happy and looking forward to the next race. We got a lot to drink about tonight!” A 20-second penalty post-race did not affect PROsport Performance’s position.

Despite dominating the first two hours of the race from pole position, the Hofor-Racing Mercedes-AMG GT3 (#1, Michael Kroll / Chantal Kroll  / Roland Eggimann / Kenneth Heyer / Christiaan Frankenhout) finished just off the A6-Am podium in 7th after a misplaced gamble on pit strategy dropped the reigning A6 and GT champions down the order after the third hour. 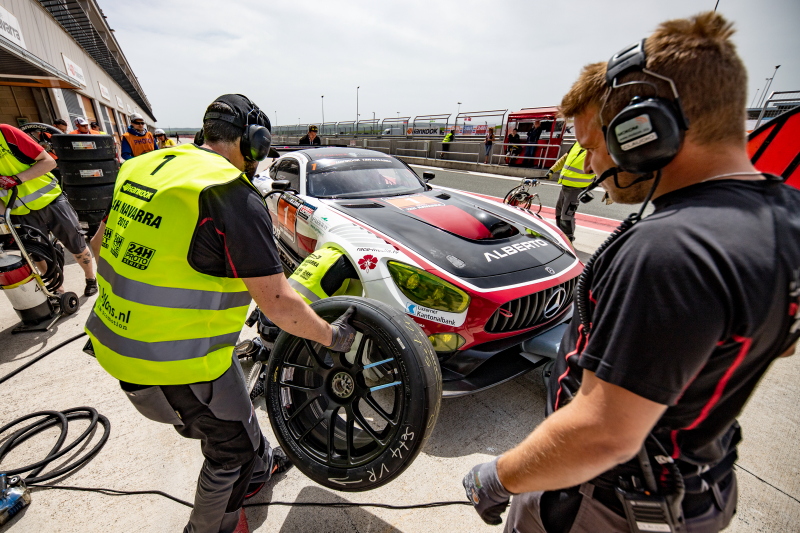 Behind them on the road was the second Car Collection Motorsport Audi R8 LMS (#33, Ali Çapan / Dirg Parhofer / Isaac Tutumlu Lopez / Peter Schmidt) and the Herberth Motorsport Porsche 991 GT3 R (#911, Daniel Allemann / Ralf Bohn / Robert Renauer). The latter had looked set to compete for outright victory until a clash on-track just 15 minutes into the race dropped the reigning Champions of the Continents to the tail of the field. Ironically, the car it clashed with was the Bohemia Energy racing with Scuderia Praha Ferrari.

The Herberth Motorsport Porsche 991 GT3 R (#911, Daniel Allemann / Ralf Bohn / Robert Renauer) was an early contender for victory, but the reigning Champions of the Continents made contact with the Scuderia Praha Ferrari whilst battling for 3rd, losing 25 minutes in the pits and dropping 16 laps down as a result.

The Vortex V8 Vortex 1.0 (#204, Lionel Amrouche / Philippe Gruau / Philippe Valenza) also suffered woes at Navarra after a heavy shunt into the barriers, which brought out the only Code 60 caution period of the first three hours, the race restarting for the second, 9 hour section after an overnight pause. 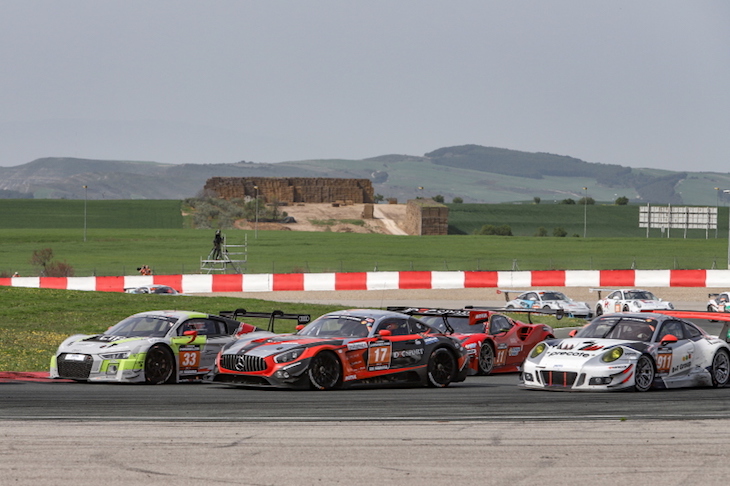 The VDS Racing Adventures MARC Focus V8 (#58, Raphaël van der Straten/ José Close) claimed its second category win of the season in Navarra, and was the only SPX entry still running at the chequered flag. Victory had looked set to go to the True-Racing KTM X-BOW (#116, Johannes Stuck / Ferdinand Stuck / Reinhard Kofler / Klaus Angerhofer), but the Austrian team could not remove the left rear wheel during a pit stop, retiring shortly afterwards.

Cruelly, the sister entry (#117, TAKIS / Hubert Trunkenpolz / Gerald Kiska / Klaus Angerhofer / Reinhard Kofler) retired on the very same lap after making contact with the tyre barriers. Both KTMs though had done enough to secure 2nd and 3rd respectively on the SPX podium. 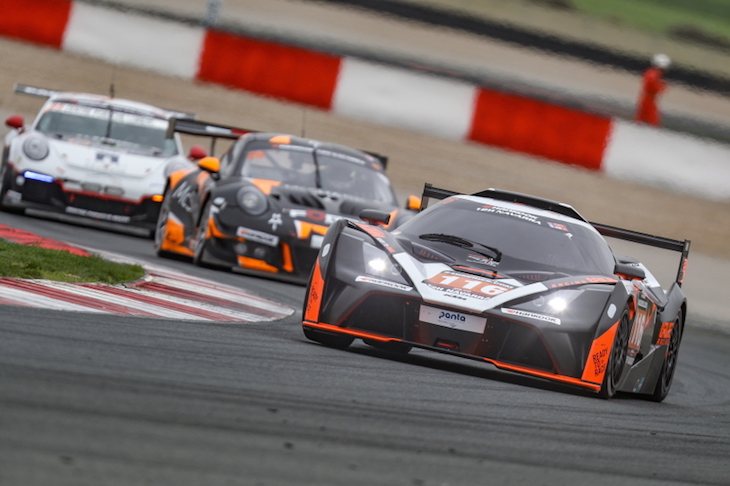 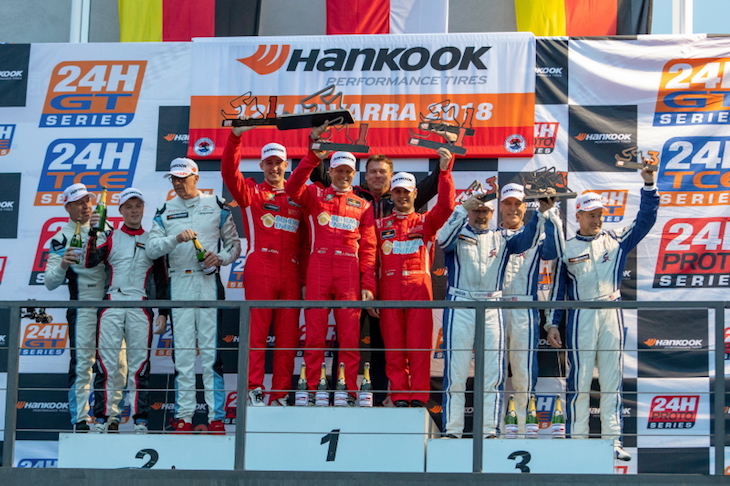