Naturally there has been a lot of interest around Fernando Alonso joining Toyota and the WEC Super Season. A F1 champion and someone with a stated aim to win the ‘Triple Crown’ is always going to bring interest beyond the normal bounds of the sport – both inside and outside.

So while there have been many headlines already written, the action starts this weekend as Alonso tries to get to grips with a new car, a new series and a variety of new challenges.

It started well for Alonso yesterday, topping the first free practice session in the Toyota TS050 Hybrid. A lap of 1:58.392 showed his known speed, topping the session by over a quarter of a second.

But the outright times may not have been his primary aim for practice after missing the prologue for a F1 race.

“I will keep improving,” he said. “In practice I will get as much information as possible in practice, judge the speed difference with the classes. I have been training a lot in the simulator, this kind of situation so I will prepare a lot for the traffic.”

In addition to his simulator work, he raced Daytona and competed in a 24 Hour go-kart race to gain more experience racing with traffic and at night.

“We prepared for a this test in the simulator but it is different on track. At night in Singapore, Bahrain and Abu Dhabi are well illuminated. In the test, it is really dark. At Le Mans it is something similar. The straights are quite dark but the corners there is some light.

“The car is different – it has different challenges and feelings. This car is very sophisticated. With the hybrid systems – you have the traction control and four wheel drive. It is obviously optimised.

“What you get with the traction control and the four wheel drive is amazing. The whole team is about endurance and consistency, you can drive your own driving style for 60 laps.” 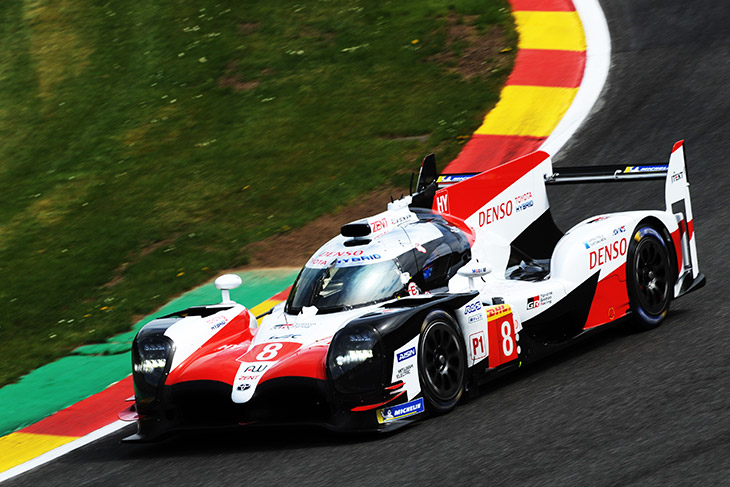 A positive team atmosphere in the Toyota Gazoo camp and running with co-drivers has also helped Alonso get up to speed.

“The atmosphere in the team is amazing. Everyone is really friendly. We have a Whatsapp group and we are always chatting. We were taking pictures of each other today. The atmosphere is so friendly and so nice – this is one of the best things.”

But it also seems that the headlines for Alonso are well founded and won’t be wasted. He is committed to the sport – having wanted to do Le Mans before the thoughts of the ‘Triple Crown’ came about.

His desire was demonstrated in his Ferrari days when he visited Le Mans to wave the ‘tricolour’ to start the race. He also revealed his intentions at the WEC’s end-of-season gala in Bahrain back in 2016, during a video marking Mark Webber’s retirement .

“You’ve had a fantastic career,” he said in the video, “you didn’t wait for me there, it would have been nice, but you’ll still be around and I’ll ask you many things when I join your adventure.”

So, when the oppourtunity did present itself, he pounced on it.

“Initially (my desire) was only for Le Mans, I’ve wanted to race at Le Mans for a couple of years now. At the end of last year I thought this could be a possibility now in 2018. Then Porsche retired and the ‘Super Season’ was a reality. It wasn’t eight races anymore – only five this year, three next year with two Le Mans.

“So the ‘Super Season’ became attractive.”

This in turn has sparked a dedication to sportscar racing beyond a Le Mans win, assuming the 2019 F1 calendar doesn’t feature any clashes with the WEC ‘Super Season’s final three races.