Acura Team Penske capped off a dominant weekend at Mid Ohio with a first win for the ARX-05 DPi, Helio Castroneves and Ricky Taylor in the #7 taking the win, eight seconds ahead of the sister #6 of Juan Pablo Montoya and Dane Cameron which finished second and made it a 1-2 for the team.

The result in the race came after every pre-race practice session ended with both of the team’s Acura ARX-05 Daytona Prototype international (DPi) cars sitting 1-2 on the time charts. Then in Saturday’s qualifying session, Helio Castroneves took pole in the #7 Acura DPi, nipping teammate Dane Cameron in the #6 entry, who wound up second on the starting grid.

In the race, the dominance continued over the other Prototype field, the Acura Team Penske DPis led every one of the 125 laps in Sunday’s race.

“I’m driving with one of the best organizations in the world, one of the best manufacturers in the world,” Taylor said after the race. “We visited Acura’s factory for the NSX on Thursday and really got to see all that goes into these beautiful cars, and it really gives you a good sense of pride.

“On top of that, to win for the first time back for Mr. Penske is outstanding and to start the month of May off for Helio with a win is awesome. There was so much pressure to get the car from him in the lead. He did an awesome job, so I had to fight to make his efforts worth it.”

The result marked Taylor’s first IMSA WeatherTech win since the round at Detroit last June alongside his brother, Jordan Taylor, Wayne Taylor Racing’s Cadillac DPi-V.R, and Castroneves’ first since he won the LMP2 class at Petit Le Mans in 2008.

It was also Team Penske’s first IMSA win in nearly 10 years, the last one coming at Utah Motorsports Campus near Salt Lake City, Utah, when Timo Bernhard and Romain Dumas won in the #7 Porsche RS Spyder in 2009, and Acura’s first win since the end of the 2009 season, when Gil de Ferran and Simon Pagenaud won at Laguna Seca.

“That was great,” Castroneves said. “It started from the beginning, actually the front row, the #7 and the #6 were right there. Dane was really strong and put a lot of pressure on me, but in the end, it was a long race. I was taking it easy and making sure we made the numbers that we needed to make, and then I left it to my teammate here, Ricky, and what an incredible job he did.

“Not only making room and trying to find places around the track to pass people and keep cool, which that’s the toughest part. I was biting my nails back there, but in the end of the day, he brought it home in phenomenal style. I’m so glad to be part of this organization, it’s great for myself and Ricky to give the No. 1 victory for Acura and hopefully this is just the beginning.”

Castroneves and Taylor combined to lead a race-high 87 laps. The other 38 laps were led by Cameron and Montoya in the #7. It was the second time this season that a Prototype team scored a 1-2 sweep, with the other coming in January’s Rolex 24 At Daytona when Action Express Racing went 1-2 with its Cadillacs.

While Acura Team Penske was dominant throughout the weekend, they did face competition from both Mazda Team Joest DPis to earn the victory. Both the #55 Mazda RT24-P of Jonathan Bomarito and Spencer Pigot and the #77 of Oliver Jarvis and Tristan Nunez challenged the pair of Acura DPis throughout the first half of the race before fading towards the end.

The #55’s chances ended just after the halfway mark when contact with a GT car caused suspension damage. The #77 meanwhile, finished the race third with a strong run.

“The track it’s self is pretty interesting, but we did’t have the pace that I wish we did,” said Albuquerque. “Overall the winning car was in a different category than everyone else. But it was a clean race with no adventures with the safety car, which could have played a little better for us. We did win our race being the best Cadillac. It was a smart race because we gained points towards the championship.”

Porsche on top in GTLM

In the GTLM class meanwhile, it was all Porsche. The #911 911 RSR of Nick Tandy went from second to the lead on the race’s opening lap – and subsequently led the race’s first 55 minutes – before Earl Bamber in the sister #912, claimed the lead with 90 minutes remaining in the two-hour, 40-minute race. With co-driver Laurens Vanthoor, Bamber never looked back, only losing the lead on a series of green flag pit stops to win by 1.673 seconds. 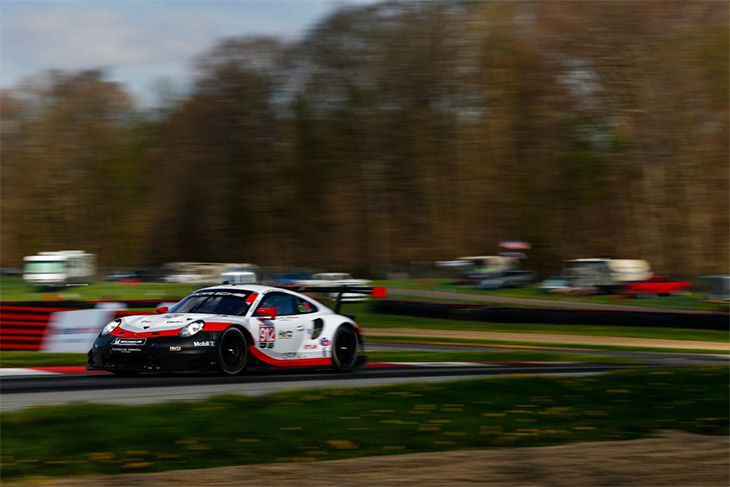 “We had really smart strategy that gave us the lead at the pit stop,” said Vanthoor, who picked up his first career IMSA win. “It gave us a good gap, but I had to try and control it a bit with the tires. I knew the guys behind me wanted to catch me, but I didn’t want to destroy my tires too much, which isn’t easy. It was a very stressful one and a half hours. I was happy when it was done and finally we won.

“I had to wait one-and-a-half years to get my first win. We’ve had some opportunities as well, but it always went wrong for some reason. Finally, it worked out and it’s a huge relief.”

Behind, BMW Team RLL driver De Phillippi kept Porsche honest, the team utilising a different pit strategy that saw him lead the race late, before Vanthoor finally retook the top spot with 33 minutes remaining. He made a late charge in the closing laps, but ultimately finished second alongside co-driver Alexander Sims, matching the duo’s best finish of the season.

As is typical in the ultra-competitive GTLM class, four different manufacturers made up the top four positions, in a race which saw all eight entries finish on the lead lap. The #3 Corvette Racing Chevrolet Corvette C7.R of Antonio Garcia and Jan Magnussen rounded out the podium and the #66 Ford Chip Ganassi Racing Ford GT of Joey Hand and Dirk Mueller finished just outside the top three.

“This was a two-hour, 40-minute race and I think the top six or seven cars were covered by 28 seconds by the end of the race,” said Bamber. “I think that shows how great the BoP is and how great IMSA is doing. You can’t make a little mistake or you’re at the back. But that’s why we’re here, to race the best and make it a tight fight and we love it.”

Like Acura in Prototype, the 3GT Racing Lexus team put on a dominant display in GTD, taking pole position and going on to win. 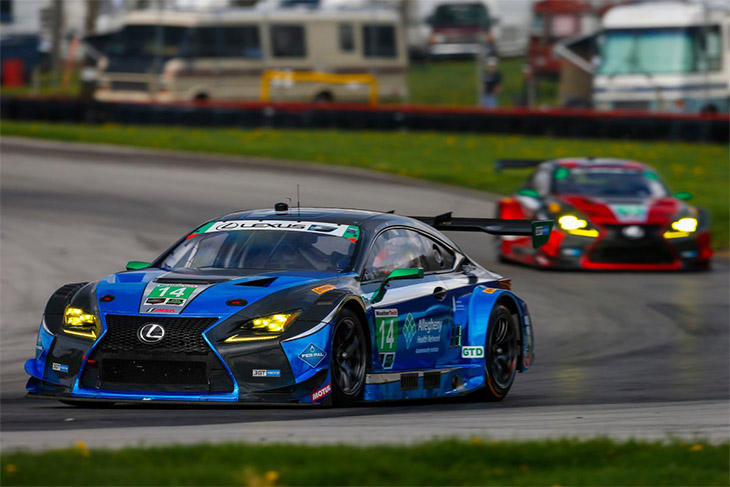 Saturday afternoon, Jack Hawksworth in the #15 3GT Racing Lexus RC F GT3 scored the manufacturer’s second WeatherTech Championship pole. While the drivers of the team’s other entry – Kyle Marcelli and Daniel Baumann in the #4 Lexus made it a front-row lockout by qualifying second.

At the end of Sunday’s race, it was Marcelli and Baumann on the top of the podium after dominating the second half of the two-hour, 40-minute Acura Sports Car Challenge to deliver the historic first North American victory for the Lexus RC F GT3.

“This is a huge win,” said Marcelli, who also won the CTSC race during the weekend. “It’s always difficult to get the first one. There is always a lot of pressure. I think I put a lot of pressure on myself. This is the first sprint race of the season and I knew we had a strong car and a strong driver line-up and we needed to execute. I knew if we didn’t make a mistake then we should get a good result.

“It’s a team effort, the 3GT guys have worked so hard for two years. It’s the second year of the program, so it’s an honor to bring them the first win for 3GT and Lexus. (Going to Detroit), I guess you could say it’s a home race for the team, so again we’re probably going to put a lot of extra pressure on ourselves to go ahead and execute.”

Between the two RCF GT3s, 3GT Racing led every lap of Sunday afternoon’s race. Hawksworth and co-driver David Heinemeier Hansson led the first 43 laps and ultimately finished fourth, which also bested Lexus’ prior best finish of fifth up until Mid-Ohio. But it wasn’t without it’s drama.

Alvaro Parente in the #86 Meyer Shank Racing Acura NSX GT3 looked to deliver heartbreak for Lexus and a victory for the race’s entitlement manufacturer, at one point pulling within inches of Baumann on the final lap of the race. Baumann was able to hold off the charge, leaving Parente and co-driver Katherine Legge with a runner-up GTD finish for Acura.

“I felt the pressure coming with 15 minutes to go,” said Baumann “We struggled a little a bit with the used tires in the second half of the stint. I think one more lap and he would have passed me for sure. I was happy when I saw the white flag – one more lap – he closed in so quick and I just tried to defend with everything I’ve got. (The first win), it’s a great feeling.”

Parente said traffic cost the team the win at the end, though he and Legge are still pleased with the podium finish.

“I am very happy with the result because we were on it and had a great weekend. Unfortunately, I got caught up with traffic which cost me a load of time and that was probably the race win right there.”

Rounding out the podium were Sebring winners Bryan Sellers and Madison Snow in the #48 Paul Miller Lamborghini Huracán GT3, who increased their lead in the championship to eight points following their third consecutive podium.

The next race for the WeatherTech Championship GTD class will be the Chevrolet Sports Car Classic at Belle Isle Park in Detroit on June 1/2.