In the first of an occasional series, former editor Malcolm Cracknell keeps the current editor up to date on what he’s thinking about current endurance racing – and other things.

This idea came to me after watching the whole of the WEC Spa 1000 Kms on the TV. I’ve ‘borrowed’ a rather famous heading from the MOTOR Sport archives: of course I don’t claim to have the insight of DSJ, but like him, but for a different reason, I won’t be including any comments from drivers or entrants – because I rarely talk to anyone in the racing business these days.

I just potter along in the East Sussex countryside, managing as best I can. As you know, I moved house in mid-February, and the experience nearly killed me. Never again: I’m leaving this house in a box. I’ve got quite a lot of lawn to cut here, and trying it with a conventional, powered mower led me to conclude that I’d be burning up all my limited energy cutting bloody grass… so I bought a ride-on mower. It’s brilliant! A lovely wide cut, such that a dozen passes and I’ve virtually done it. Yup, I get my (very limited) thrills at 7 mph these days…

In this dwelling, I have at last discovered I can watch the whole Spa race live. Wow! I recorded it, so that I could watch it an hour or so at a time – and I thoroughly enjoyed it.

You’ll know of course that I wasn’t a great fan of the Porsche / Toyota / Audi era of the WEC – more so the 2017 Toyota / Porsche season. Why did the two manufacturers have to present their cars in such similar liveries? Yes, technologically, they were magnificent, but technology doesn’t necessarily make for great racing (see F1). They were (are) blindingly fast and amazing through traffic – but there were only four of them.

Now there are two (plus, potentially, eight more). I love almost every aspect of the new LMP1 non-hybrids! What a shame that financial problems in China seem to have caused such problems for Manor and the Ginettas. I really hope they appear at Le Mans – but a debut in the 24 Hours? Crikey.

Then Emerson’s grandson crashed before raceday arrived, so eight became five. But with the two Toyotas, that at least made seven LMP1s, blasting and weaving through traffic: what a great spectacle. I loved it.

It didn’t really matter to me that the race for the overall win was between the Toyotas (or not). I enjoyed following the non-hybrids, and was very pleased to see the Rebellions go so well first time out. And also pleased to see how reliable were the other three LMP1s. 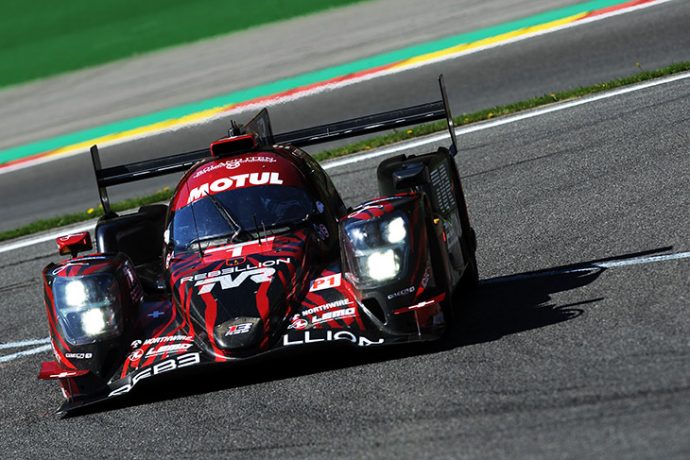 What do the hybrids provide in entertainment terms that the non-hybrids don’t? What is the difference in cost between running two Toyotas for a (typical) season and, say, two Rebellions or two BR1s? The difference must be vast.

Thinking F1 for a moment, the cost of running two Mercedes over a 20 or 21 race season is allegedly about 400 million (pounds, euros, it doesn’t really matter that much). That works out at about 20 million quid to put two cars on the grid for each race (with the world champion’s cut about 10% of the overall cost).

F1 is about to be in a state of turmoil over future regs., some participants keen to keep spending 400 million, stick with the high-tech stuff and keep on employing 1,000 staff, while others want normally aspirated engines and a budget cap.

What do the fans want? Does it bother them, in entertainment terms, that the cars are so high-tech – and is it of any relevance to them that invisible air plays such an important role in sticking them to the ground? 200,000 (pounds / euros) for a front wing? Absolutely laughable.

I’m sure Toto Wolff is more confident of success with 1,000 staff and 400 million than he would be with, say, 500 staff and 200 million – but these guys must feel more powerful with a mighty operation behind them than they would with a smaller one.

But with significant parts of the motor industry “on its arse” (your words, Graham), isn’t the relevance of modern racing not the high tech developments and research, but rather the possibility of going racing with sensible budgets?

You know my thoughts on the ALMS in the first decade of this century: you know how much I loved the racing, the hype, the crowds, the buzz, the openness of all involved. You can therefore imagine how pleased I am to see the IMSA series recreate itself so well. So successfully that I will go to Sebring next March: just line me up so I can go out on a golf cart with Regis Lefebure – but no racing, Regis! 7 mph is my limit… Just park me somewhere with a good view please.

So there are four manufacturers involved among the DPis: what a fantastic achievement. And presumably as chassis are bought in from one of the three LMP2 suppliers, no one is spending vast sums of money to go racing. 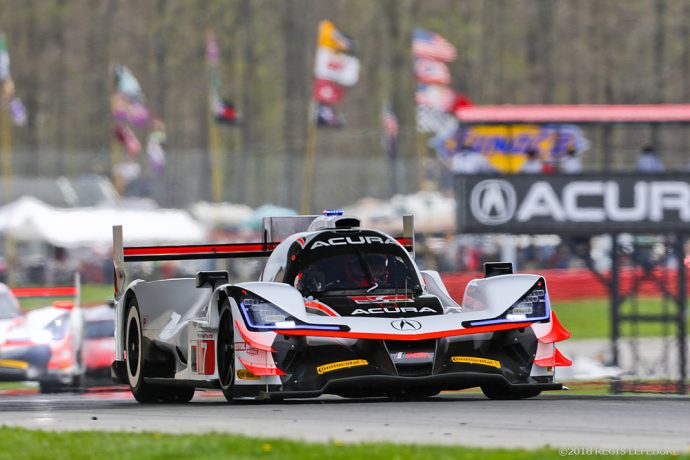 But if I’ve got this right, the dilemma is that the ACO won’t allow the DPis to compete against their ‘spec’ LMP2s in Europe – and all the while, discussions are taking place regarding the regulations for 2021 (or is it 2020?). I think you said that Ford want regulations for the top class such that their cars can compete on both sides of the Atlantic. Entirely logical.

But aren’t we close to a situation where this could easily happen, very cost effectively? Let me explain.

When Tom Walkinshaw persuaded Jaguar to go Group C racing in the mid ‘80s, Tony Southgate designed a carbon fibre tub, Advanced Composites made it, the TWR engineers developed the Jaguar V12, Walkinshaw bought a gearbox – and lo and behold, for half a decade, we gloried in the Silk Cut, TWR Jaguars. Did they look like Jaguar’s road cars? Not really, but the fans took them to their hearts. They were Jaguars. Similarly, when the Sauber Mercedes were sprayed silver for 1989, they became Mercedes. 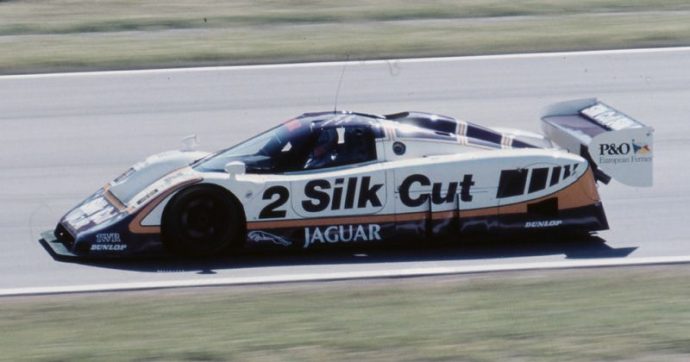 The ’99 Toyotas were obviously Toyotas, the BMWs raced in corporate colours and were obviously BMWs etc. etc. That year was the heyday of Le Mans during ‘our time’, with, I think, nine manufacturers involved as potential winners. Isn’t that prospect repeatable within a year or two?

Call me naïve, but if Cadillac, Acura, Nissan and Mazda all think it worthwhile to race in IMSA, at a sensible cost, how many might adopt a similar model if the prize was a Le Mans win? ‘All’ it would take for that to happen would be for these four to move up to an IMSA LMP1 class, leaving LMP2 as the privateer class – as at Le Mans.

How are these IMSA, factory / importer supported entries markedly different from the Silk Cut Jaguar model? OK, thanks to modern aerodynamics, there is a problem distinguishing one DPi (or European LMP1) from another, but that’s a challenge for the rule makers, aerodynamicists, stylists and marketing men, isn’t it? Colour schemes are so important here. Even the Audi R8 chassis was built by an outside supplier, but Audi rode the wave of Le Mans success on the back of the fact that everyone knew that the silver cars were Audis.

You can see where I’m going here, I think. Surely there are a good number of manufacturers who could be persuaded to go endurance racing if the cost was sensible (or do some only do it if the spend is big?). But not only manufacturers….

Surely the Rebellion model is a good one? What about a Virgin-liveried entry? Or Dyson (James, not Rob). Or easyjet? Couldn’t a manufacturer ‘piggyback’ with a major corporation?

In F1, there already exists the Red Bull Aston Martin arrangement. Oi, Newey, just create some bodywork for this P1 tub so it looks something like an Aston Martin, would you? It shouldn’t take you long.

Or the likes of Peugeot, Nissan, Alfa Romeo, Fiat (Ferrari?) – and all the rest – could go it alone. The Peugeot would be dark blue, the Alfa Romeo dark red, the Ferrari’s colour could only be red, Nissan racers always look like Nissans… What about KIA and Hyundai? Chinese manufacturers? Who have I missed out? Is it naïve to think that ten major companies / manufacturers could be on the (LMP1) grid of the 2021 Le Mans 24 Hours? Why not? Am I, in my advanced years, missing something? It might not appeal to German manufacturers – but it might be so successful that they’d have to get involved.

Harking back to ’99 again, the only problem was that eight manufacturers failed to win the 24 Hours – and the bulk of them drifted away, leaving us to report on the Audi years. But if, 20 years later, they could be persuaded that being part of the show, and racing competitively, is just as rewarding as winning the race… Is there a limit on spectator numbers at Le Mans? I’ve got a feeling they could break the 300,000 barrier to watch this spectacle..

With a modest spend, the car makers could still go electric racing as well…

Ferrari might develop an entry just to show Liberty that it’s thinking about leaving F1, if it doesn’t get what it wants… Enzo has done it before, with his never-raced Indycar.

Talking of Ferrari, I’ll review the Enzo biography shortly: a copy was sent to me by mistake. Until about 1970, the Great Man loved sports car racing more than F1, and the Spa 1000 Kms was a bigger draw than the Belgian GP. It’s time that sportscar racing became truly great again. But are we getting there? The crowd at Spa last week seemed to be a very good one.

Just a couple of final thoughts, until after Le Mans. A pal gave me a copy of a recent AUTOSPORT last week, and I was fascinated to see that one Charlie Cooper has just made his racing debut, aged 37, in the MINI Challenge. Charlie is the grandson of John and great grandson of Charles – and I taught him when he was ten! Charlie’s father Michael gave me a signed copy of the history of Cooper Cars in about 1990, which of course I’ve still got. Charlie has apparently given up rugby owing to a knee injury, and has now turned to racing. He was a demon tackler aged ten: one of those fearless kids, who’d throw themselves at anything heading towards them. Just the kind of mental approach to be a racing car driver.

And finally…thinking of 1999, when we hadn’t even met, I was having an exciting year. Daytona for the first time, a classic Le Mans, the start of the ALMS, a brilliant ALMS finale at Las Vegas (watching James Weaver driving the wheels off the Dyson R&S so that EF-R could take the inaugural title, beating the BMW drivers), meeting Weaver and Andy Wallace for the first time, having a sticker on Paul Newman’s 911 GT1 at Daytona… so many memories. I even predicted the BMW win at Le Mans, one of only two ‘open’ years when I got it right. The other was Mazda in 1991. Presumably Toyota will finally become the second Japanese winner? Alonso vs. Button sounds like fun – but I’ll be concentrating on the LMP1 non-hybrid race.

Hope it was a good ELMS event at Monza: I enjoyed the Ricard opener immensely. But above all, after the dramas at Spa, I hope it’s a safe Le Mans.