After our story about the winning run from the ADAC Zurich Nurburgring 24 Hours, there has to be the other car involved in a classic fight.

That was Adam Christodoulou. It was always going to be a challenge to hold onto the lead. He had a comfortable, several minute lead before the red flag but that was gone and there was a fired up Fred Makowiecki behind him.

Someone who was going to win, almost at all costs.

The Mercedes didn’t have the outright pace of the Porsches but they were fast. Aferall, Engel had put in the fastest lap for a GT3 Mercedes in qualifying.

The Mercedes had the gap on the Porsche after a penalty for a Code-60 violation. When the red came it could have sealed the win, if the race had been terminated. Given the weather, no one would have held it against the race, the drivers and teams for stopping. But the call to restart soon came.

“To be honest, I was bricking a little bit. When the track is just wet it is fine. But as soon as there is standing water, that is when you are in the hands of the gods, Christoudoulou said.

“At any point I could aquaplane off and throw the whole race away. It is at that point where you think if you want to have that much responsibility and pressure.” 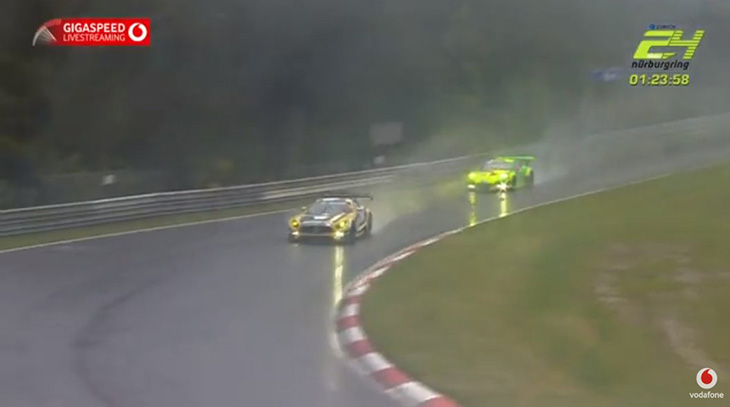 “I have been fortunate I have been race here for a number of years. I had to treat it like a sprint which is a bit unusual around here. As soon as the water started to stand on the track, we just seemed to aquaplane more than the Porsche did…it was at that point that they started to gap me.”

Toe cars got rolling and under safety car they went. The call to go green came late and shocked the drivers.

“To be honest, I was shocked it restarted,”

“The safety car left its lights on the whole way to the final corner. Usually they will tun the off in Tiergarten or half way down the straight. As soon as I saw it dart into the pits, I went ‘right, it’s green, we’re going’. I nailed it as much as I could to give myself a bit if breathing space into turn 1.”

The fight with Makowiecki has tough. Watching on the screens was entertaining. You wondered how they were doing it. There was fog and standing water. And they had beed racing for almost 23 hours.

“At times I went a little beyond the limit and there was a little contact but I just wanted to win so much. It was tough to allow them to overtake. I had to do whatever I could to keep them behind us.  This weekend, they were too fast.”

“You can never give up, you have to push all the way to the end. That is what we did. Maybe we could have stretched an extra lap of fuel at the end but in the end they were 10 seconds too late to get that extra lap.”

After the winning run for Fred Makowiecki at the, there had to be the other guy.

For Christodoulou, his efforts were heroic but, there was no repeat of his 2016 win. “[I am] very emotional. It was one of them before the red flag we are looking pretty. We had a two and half minute gap. But for safety they had to stop the race. The fog was far too bad. I was a little surprised they restarted the race but as it turned out, it did clear.”

But both Makowiecki and Christodoulou put in masterful performances in conditions that most would dare go out in.

It was a classic, and one that we will remember for a long time. But Mercedes and Christodoulou have motivation come come back and seek a little revenge. “We want to come back. We have unfinished business. I was able to take the win two years ago which was fantastic. Of course we have been pushing hard  to try to repeat it.”

And we all look forward to that prospect.