The DSC Editor spent a happy afternoon in the (it should be said very happy) Blancpain GT Series paddock over last weekend.

One hugely positive encounter was with Dr. Andreas Baenziger, a long-time acquaintance via the Nürburgring 24 Hours, he and his business partner Dr. Florian Kamelger were part of the Aston Martin Test Centre Race programme for almost a decade, the last year with an R Motorsport Aston Martin GT4, me as part of the Radio Show Limited radio team covering the race from the comfort of the Aston Martin Drivers Lounge.

Now though he and Florian Kamelger have new roles, as co-owners of AF Racing AG / AF for Andreas and Florian who field the R Motorsport Aston Martin GT3 effort in the Blancpain GT Series Endurance Cup with support from Arden Motorsport and Jota Sport.

Now of course I understand that the men and women I see in these semi-social situations often have very significant careers elsewhere, but it’s fair to say that Andreas’s trot through the back story of, and the future plans for, their enterprise was an eye-opener.

So where did it all start Andreas?

“We’re actually both from the medical field. I’m an orthopaedic surgeon and Florian is a trauma surgeon. 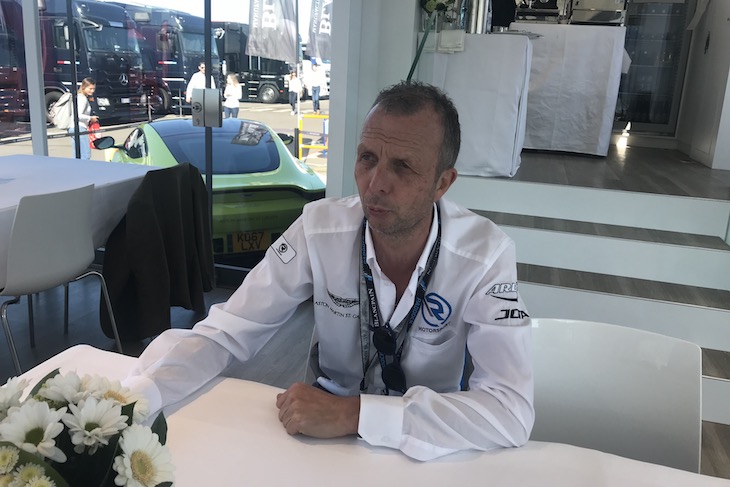 “I owned two BMW dealerships for many years as an investor behind the scenes but sold it up in 2008 as it became boring.

“I bought an Aston Martin DBS and met Dr. Uli Bez, the former CEO and Chairman of Aston Martin, and he wasn’t happy with the way things worked in Switzerland, so we started the only exclusive Aston Martin dealership in the country. In the beginning it was a disaster, the problem was that there was a luxury crisis in 2009, 2010, you know and then other dealers were fighting against us. The big thing was the euro dropping, as we were buying in Swiss Francs, and when it dropped we had 7 Mio Swiss Francs worth of stocks and they tanked 25%. It was terrible.

“So then Florian and myself questioned ourselves on whether we needed a dealership in order to drive expensive cars? The first Aston we bought was the GT4 and not a road car, so we said let’s do something different to everyone else in the world. We focused on after-sales, on special cars, on racing, and when the new shareholder group for Aston Martin was announced we knew that was going to happen. We made the plan to invest into a big new and different dealership.

“We invested 20 million Swiss Frank into like a club, with our own chef. And I am happy to tell you it’s very successful and we sell on average up to 20 percent of all limited cars from Aston Martin. For example, Vanquish Zagatos, only 325 will be sold, and we will deliver around 50 of them. We sold a third of all DB4 GT Continuations.

“Then in 2013 we really started to move up. I had an idea, I calculated, I talked to clients and I had 10 who said they wanted an Aston Martin Project DP-100 car, like the one from Gran Turismo (below). So I said to Dr. Uli Bez that we should build 10 cars, each car 4.5 million, 45 million budget, we have all the money, let’s do it. Uli Bez wasn’t sure, he said we have new shareholders which means we have to focus on the new cars, which was all good. So the project was dead. 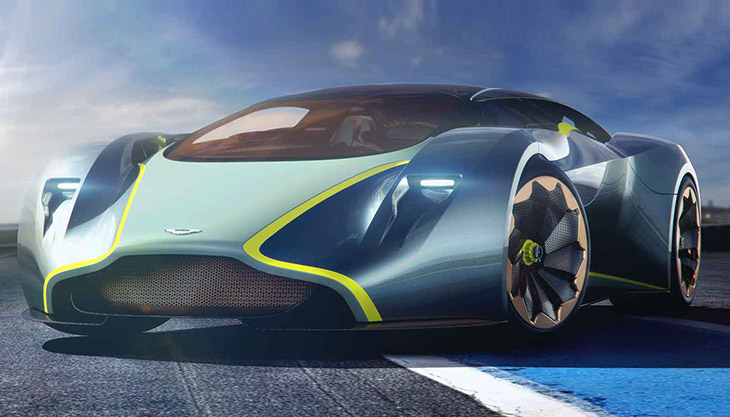 “Then of course when Dr. Andy Palmer came, it didn’t take long to get close to him because special cars are such an important part of his plan. And we went to him and asked him if we could do the project.

“After a week he came back to us and said “we could do the project. I’ve talked to the shareholders, but they told me three things which need to happen. First thing is that the project isn’t allowed to be cash negative for the business at any point, which is understandable from the shareholders point of view. Secondly it’s not allowed to make a loss. Third it’s not got to take much management attention.

“That was the middle of 2015 and the next thing Florian and myself were asked is if we could come to a meeting with Red Bull that was at the day when Florian’s son was born, which was an emotional coincidence. A series of meetings later and Andy Palmer asked me what I thought, then Florian and myself analysed the situation for three to four weeks and finally said we’d make sure that all the parameters would work and decided to take the full financial risk.

“Then if you see the press release for the Aston Martin Valkyrie, it always says Aston Martin Lagonda Limited, Red Bull Technologies, and AF Racing as project partner. That’s us, that’s R-Motorsport, is AF Racing. 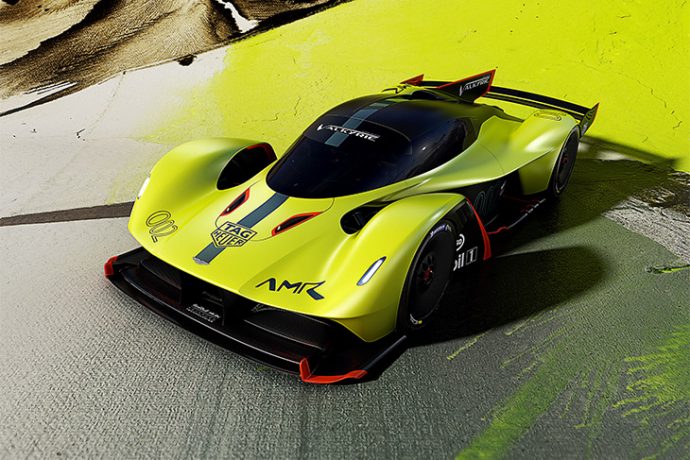 “There is a technical project steering committee with a team from Red Bull (Adrian Newey, Christian Horner) and Aston Martin Lagonda (Marek Reichman and David King), and there is a funding steering committee which is Andy Palmer and myself. We set the goals about the budgets, deposits and the pricing of the car. Our cooperation is and will about all mid-engined cars to come in the upcoming future.

“Our medical group is fairly big, but this for us is another, very emotional world. We are heavily involved in strategy with Dr. Andy Palmer. He’s a brilliant CEO and we are extremely honoured to be able work with him

“To be honest, I made a lot of money in medical, so if you’re a petrol head, and if I could have dreamed at 20 that I’m sitting on the steering committee of such a project, I mean… Wow. And at the end it will also work financially, that’s connecting. But the money was never really the intention, it was driven by the credibility doing racing and by passion.

“We have clients at the Nordschleife, at Bathurst, and it’s all about the emotions. That was our success, it was our credibility. It’s our Red Bull close cooperation with Red Bull. We have clients in Europe, Brazil, all over.”

Let’s talk about this racing programme for now, and where you think that takes you?

“For us, when I had the BMW dealership I had a little team doing Mini racing, very small. Then when we started with the Aston Martin dealership we went to GT4, and we still have a team that goes to the Nordschleife. We always did cool things for Gentlemen racers. I won with Dr. Uli Bez in a class, finished second at Bathurst (below in 2015), with not too big budgets but enough emotion to do the right job. 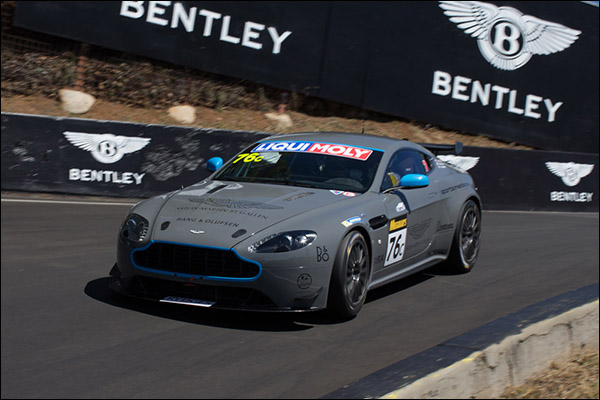 “Then we said: “OK, having in mind what’s going to happen with mid-engined cars to come we need to make a jump.” We said we’d build it up like we did with the Aston Martin dealership. But sadly Switzerland is not one of the best places to find the right people, we could have gone to Sauber or something but it’s expensive. The centre of the motorsport world is the UK, so we said we could build it up here or make a jump, that’s why we joined forces with Arden, because of the relationship with Christian Horner, and behind the scenes with Jota.

“We’ve just got our own legal entity here in the UK, we’re getting the important people in at a great base. So we’re running two Aston Martin GT3 Pro cars in Blancpain and the philosophy was the following: We don’t want any driver who comes with money because we don’t want the dads to interfere and tell us who does qualifying blah, blah, blah. And because of our role and what we’re doing, we are an attractive team to young drivers looking for a future.

“We have also developed an extremely good relationship with Dr. Helmut Marko, because he was the guy pushing, but at the time there were options for them to do such projects, but he believed in us.

“For this year Florian and myself decided we will drive in the 24 Hours of Barcelona with one of the GT3’s and just from the timing we know that if something happens we can make up the car again for the next Blancpain thing. 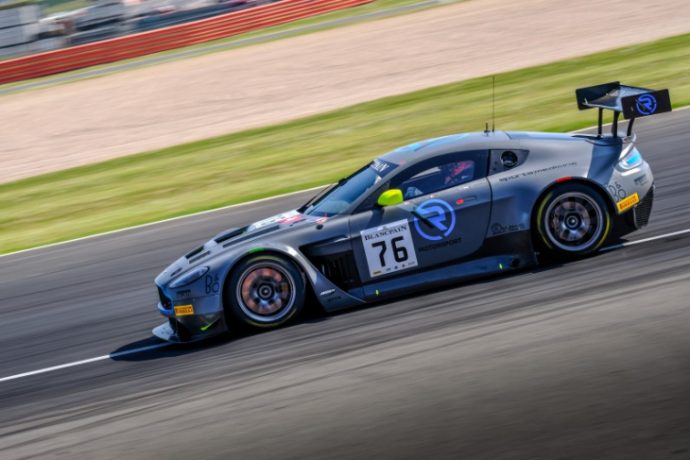 “Then at the very end of the season we will run one car in CoTA for the 12 Hour, and will ship both cars from CoTA to Bathurst. We’ll do one Pro with this car because the new generation GT3’s are not ready before January 2019. One Pro and one Pro-Am in Bathurst, then we’ll probably sell one of the cars, and with one of them we want to do the Nurburgring 24 Hours next year. For an Am, this car is still a perfect car Then in Blancpain we will run with two new GT3s. It’s a long-term plan.”

So come on then. Five years down the line, if things come together in the way you’d like them to come together. What will R-Motorsport be doing in five years time?

“We have an entry in Le Mans, whatever it looks like, with an LMP whatever, hypercar.”

We’ll hear about it this year, but the new top class will be probably based on an LMP tub, or chassis, but it will look like a hypercar.

“I personally think that if the hypercar thing happens then there could be GTE, GT3 coming together, because the new generations are all based on the same cars. They’re just a little tweaked, it could be one class which would be much faster.

“Then Formula One, it’s difficult to say but I think it can be pretty attractive if all they want to do happens and then what I still think would be an interesting going forward, is the DTM, Japanese Super GT thing, that could be quite interesting. And also even going more east there could be some adaptations into the V8 Supercars which don’t have V8s anymore, so they need to find a new place.

“I see strategically investing in racing because I see a big business in the market going forward. Normal cars are getting boring, automised, self-driving, whether you buy a BMW or a Mercedes, who cars, it’s a battery on wheels, boring, whatever. That’s why I think the Formula E thing must happen, but it’s a marketing tool to sell E cars, it will never be racing.

“For example in Switzerland there’s no racing, now they’re starting with Formula E, and it’s all the Green Thing, and now Zurich says we go green. All the support trucks make more noise and more CO2 and everything else. It’s ridiculous, they send them to the middle of a city, and the cars of Formula One, that’s the irrelevant part. Petrol, noise, the whole paddock is the problem not the cars.”

“At the time when we said we’d invest a lot into our building, for our clients, they know we need to make money because if we invest 20 million you have to make some money. But that’s not the problem.

“I still have a good relationship with Dr. Uli Bez, we meet a lot. He fought for us, he believed in us and made it happen.

“There will be so much more to come from our side for our clients, all disruptive and emotional, for luxury and racing. Just be prepared and watch out ….”