The 2018 Le Mans Test Day ended with Toyota fastest but not domiant. Fernando Alonso set the top time in both sessions, the first curtailed after a sizable accident, which counted the #95 Aston Martin out of any further proceedings. 30 minutes of running was clawed back though, with an earlier than planned start to the afternoon session, with the predicted showers never proving to be feature of the day.

The #3 Rebellion R-13 split the Toyotas more than once during the running, with Thomas Laurent in the morning session and Mathias Beche in the afternoon session, squeezing ahead of the #7 Toyota. Beche’s 3:19.680 in the afternoon proved to be the only time other than Alonso’s session toping 3:19.086 in the sub-3:20s.

Behind, the #1 Rebellion never looked like matching the sister car’s pace, and in the closing stages of the second session, had been edged back in the order by first the #17 (Igor Orudzhev) and then later in the day, the #11 SMP Racing BR1 AERs, Jenson Button having successfully completing his rookie laps in the morning. That was until Andre Lotterer was introduced to proceedings, the former Le Mans winner setting a 3:21.3, to complete a Toyota-Rebellion-Toyota-Rebellion sequence to savour.

“It’s been good, this moring we had issues so I didn’t get much running in,” Button commented. “I’m getting to grips with thec ar now, I did laps this afternoon and felt confident. Making progress, we need more laps but I’ve really enjoyed it, it’s been a great experience.

“The lap times are crazy fast, for the non-hybrids to be getting into the 19s is amazing.”

The #4 ByKolles ENSO CLM registered a best lap of a 3:23.644 by Domninik Kraihamer, this marking great progress for the Austrian team, bettering the team’s Qualifying time from last year’s race.

Both the DragonSpeed BR1 Gibson and both CEFC TRSM Ginettas saw little lappery in the morning. The Ginettas saw more track action in the afternoon. The BR1, saw Renger Van Der Zande complete his rookie laps, headlined by a single lap quick 3:26.9 tour, this after the car had to be recovered to the garage after an outlap in the morning session for a technical failure for the newly-rebuilt #10 car.

The Ginettas meanwhile, found more rythmn in the afternoon session, first Mike Simpson, then Charlie Robertson completing their rookie laps in the #5, as the two cars finished the test a thousandth of a second apart, both with 3:28.1s. 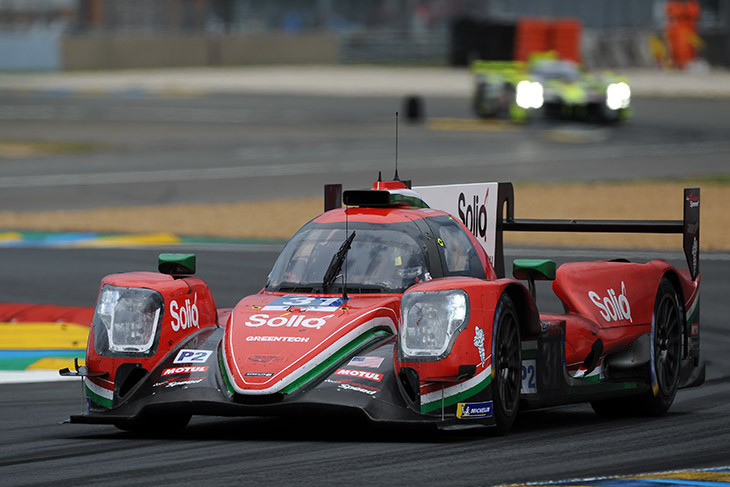 In LMP2, ORECAs again dominated, though first Phil Hanson and later Filipe Albuquerque lifted the #22 United Autosports Ligier JS P217 as high as fifth in the order, before dropping back to sixth by the end of the session.

Topping the times though, was DragonSpeed’s #31 ORECA, with Nat Berthon putting in a 3:27.228 to finish the day ahead of both Ginettas, together with the second fastest in LMP2, the #48 IDEC Sport ORECA of Paul Loup Chatin, making it a Michelin 1-2 in the class; showing off the French manufacturer’s tyres, which have good one-lap pace.

Next up in the class were the two TDS Racing-entered cars, with the #26 G-Drive edging out the #28, with Jean-Eric Vergne and Matthieu Vaxiviere the fastest drivers in those respective 07 Gibsons.

The fastest of the Dallaras would prove to be the Cetilar Villorba Corse Dallara, Felipe Nasr with a late-session run to duck under 3:30 and put himself and the Italian team eighth fastest in the class.

Late laps from Bruni and Pilet put Porsche above Ford 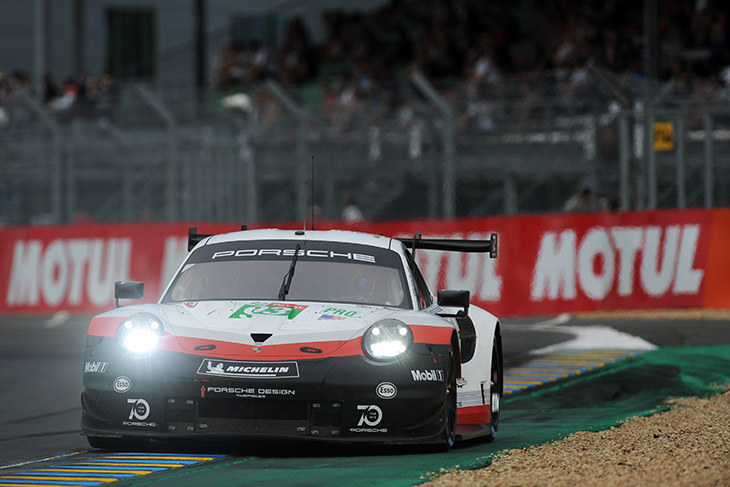 GTE Pro, was dominated for the most part, by the Ganassi Fords. The cars ran 1-2-3-4 in the Morning, and through much of the afternoon’s running until stellar interventions from Porsche’s Gianmaria Bruni and at the death of the session, Patrick Pilet.

The Italian’s 3:52.642 time took three tenths out of the fastest Ford, to top the times in the Rothmans liveried tribute 911 RSR, until Pilet put the #93 just ahead with a 3:52.551. The Fords regrouped towards the end of the session, with the top three separated by less than a tenth from each other, to see off challenges from the #92 and #93 Porsches and the #81 MTEK BMW.

There was trouble for the #51 AF Corse Ferrari which stopped on course in the afternoon, that was nothing though, compared to the issues for Aston Martin Racing. The British team saw a car in each GTE class eliminated from proceedings. Marco Sorensen’s #95 Pro car was heavily damaged after impacting the barriers on the run down to Indianapolis after a brush with the #35 SMP Racing Dallara of Harrison Newey.

Andlauer sets fastest time in Am 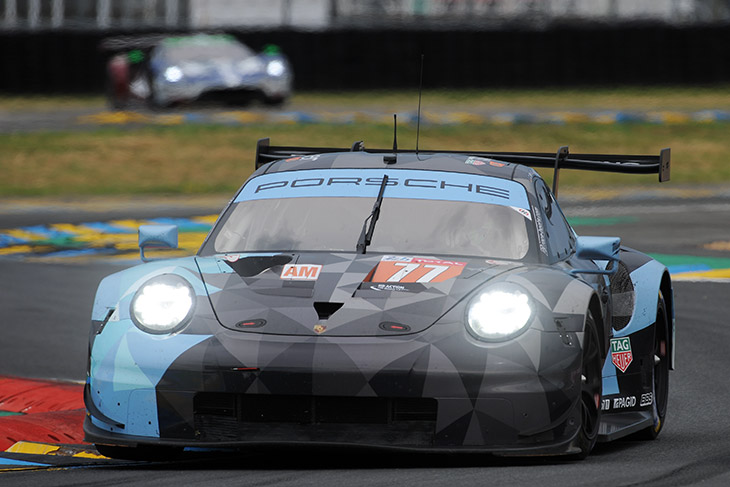 In GTE Am, the class was topped at various points by Clearwater Racing of Kieta Sawa, the #54 Spirit of Race Ferrari of Giancarlo Fisichella with a 3:56.269 and very late on by Porsche Junior Julien Andlauer. The Frenchman, the youngest driver in the GTE ranks this year, set a 3:55.970 in the #77 Dempsey Proton Porsche, using his experience gained in his Porsche Carrera Cup start at La Sarthe to good effect.

There were troubles in store though, for more than one runner. The #56 Project 1 Porsche suffered accident damage in the morning session, the #98 Aston Martin added to the miserable day for the team, damaging the engine after a run across the kerbs after an earlier incident involving an LMP2 car for Mathias Lauda, who left a substantial oil slick in his wake.

The Ebimotors Porshe too had multiple issues had both its engine and gearbox replaced, taking up much of the team’s available time, only to grind to a half on Christina Nielsen’s outlap. Clearwater also reported to DSC some electrical issues, which cost the team time early in the day.

It was an odd day of running for the 60 cars entered in the Le Mans 24 Hours. The two sessions ran interuppted and interspurced by a variety of slow zones, safety cars and four red flag periods, one for Sorensen, one for the Algrave Pro Ligier getting stuck in the gravel at Mulsanne corner, one for Antonio Felix Da Costa’s BMW getting stuck in the gravel at the Porsche Curves and a final one in the closing minutes of the afternoon.