The #8 Toyota TS050 of Kazuki Nakajima set the fastest time in the first qualifying session for the 24 Hours of Le Mans setting a time of 3:17.270 early in the session, just a tenth of a second faster than the sister #7 car in the hands of Kamui Kobayashi.

There was some drama for the #8, however as they lost seven of their lap times due to exceeding the permitted fuel flow, perhaps luckily for Toyota that did not include their fastest lap, the repeated infringements pointing to a potential systems fault for the Toyota.

The ByKolles ENSO CLM P1/01 shared that penalty with the Toyota. Tom Dillman had obliterated their qualifying time from last year.  His first lap of 3:20.911 was 3.2 seconds faster than the qualifying lap last year. However, this lap was disallowed due to excessive fuel use, putting their fastest time back to a still impressive 3:22.505.

The offense carries significant stop-and-hold penalties if it happens during the race.

The Toyotas ended the session 2 seconds clear of the best of the rest of the LMP1 field. That proved to be a time set by an ex-Toyota factory driver, Stephané Sarrazin in the #17 SMP Racing BR1 beating off the challenge of the Rebellions to the fastest non-hybrid car in the field.  The time of 3:19.483 was 0.179 faster than the quickest of the R13s.

The rest of the runners were led by the #10 Dragonspeed. The car had issues during the session, grinding to a halt midway through with Renger van der Zande stopping just beyond pit lane on an out lap with a loose wheel, “It was a rookie error” said team boss Elton Julian, “That was on us”

Beyond the process of setting quick times the teams used the session to complete the required night laps for all of their drivers, all are believed to have done so, though for the Ginettas it was a tighter squeeze than for some.

The team suffered from electrical issues for both cars earlier in the day. They opted to replace the engine on the #6 which meant that it did not run in the first hour. For the #5, a starter motor issue resulted in a delayed start to their session too.

While both cars did get out, they were lapping in the mid-LMP2 pace but their session plans were then concentrated on getting their drivers the five laps of night running. Leo Russel was the fastest of the Ginettas in the #5 lapping in a 3:26.246, climbing up the order in the final 40 minutes of the session.

It was #48 IDEC Sport in their ORECA 07 Gibson that eclipsed last year’s pole time to lead LMP2 with Paul-Loup Chatin setting a lap time of 3:24.956, more than a quarter of second up on the next best. His time was 0.396 faster than last year’s benchmark time. 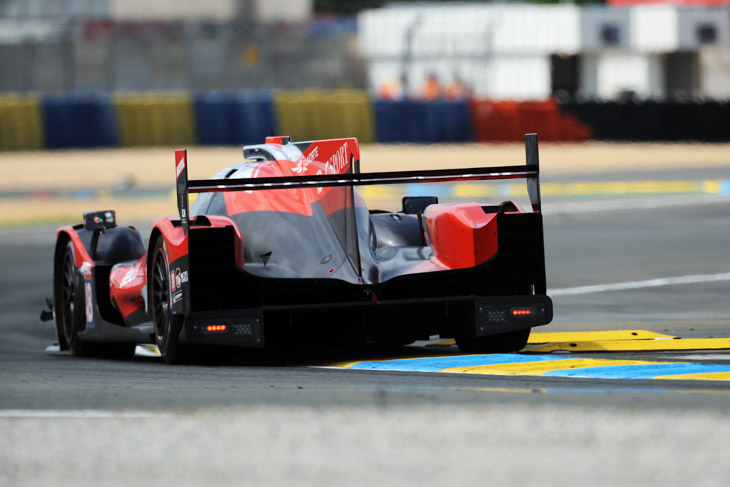 The major drama of the session was left for the #31 Dragonspeed car, the potentially front-running ORECA who damaged its front end over a bollard and missed much of the session in the garage. They would eventually end up fourth in class with a time of 3:26.508.

The Dragonspeed entry did recover to complete 18 laps in the session, the least of anyone in class.

The top five cars in class were all ORECAs (including the #36 Alpine) with the #22 United Autosports Ligier JSP217 with Filipe Albuquerque setting their fast time, 3:26.772.

As in Practice, the top times were shared between Michelin and Dunlop with the former taking the top time in the session, followed by two Dunlop shod cars.

There were numerous spins and minor offs during the session but no one suffered any significant damage.

With its latest iteration of the 911 RSR, Porsche seems to be back on top and, at the end of today’s sessions at least, clearly intent on extending its legendary status at Le Mans into the latest GTE era.

With dusk falling across the Circuit de la Sarthe, the 60 cars in this 86th running of the Le Mans 24 Hours prepared to take to the track. It would be a two hour session, and with rain forecast for tomorrow, it could be critical to grid order. Pole could be set tonight …

That possibility must have been uppermost in many driver’s minds as they took to the track, and it was soon evident that several were pushing hard, very hard. An explosive start to the first qualifying session saw the #91 blue-and-white ‘Group C’ liveried Porsche 911 RSR, #91, with Gimmi Bruni at the wheel, set a 3:47.504 to open his account. His third flying lap was short-lived however. Heading up into Dunlop the Porsche whipped backwards, at very high speed, and careered into the gravel trap amid a cloud of tyre-smoke. The rapid Italian had lost the back-end on the entry into the Dunlop Curves, rotating through 180 degrees. 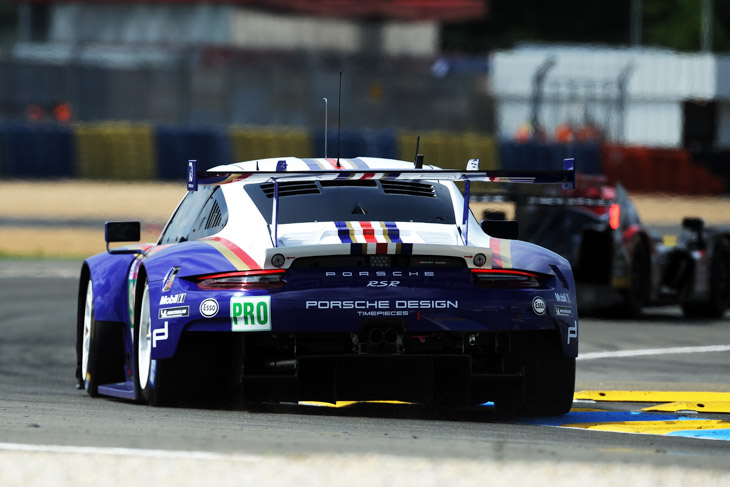 At racing speed the car was fortunate to escape damage, but the track throughout the Dunlop segment turned yellow, and with fast laps an impossibility, the majority of cars returned to the pitlane awaiting the all-clear. That came when the classic-liveried 911 was dragged backwards behind the wall, under the Dunlop bridge, Bruni apparently unable to restart the 911. It would remain there for the rest of the session.

Bruni’s off after just two laps had already been sufficient to “do the business”. He’d crossed the line in 3:47.504, a full three seconds faster than last year’s GTE-Pro pole (3:50.837). Not only did the Italian’s time eclipse the 2017 best, but the first six in Pro had also bettered that time inside twenty minutes.

The situation in GTE-Am was not quite as definitive, although still saw Dempsey-Proton Racing Porsche #88 starting out as it had left things at the end of Free Practice. 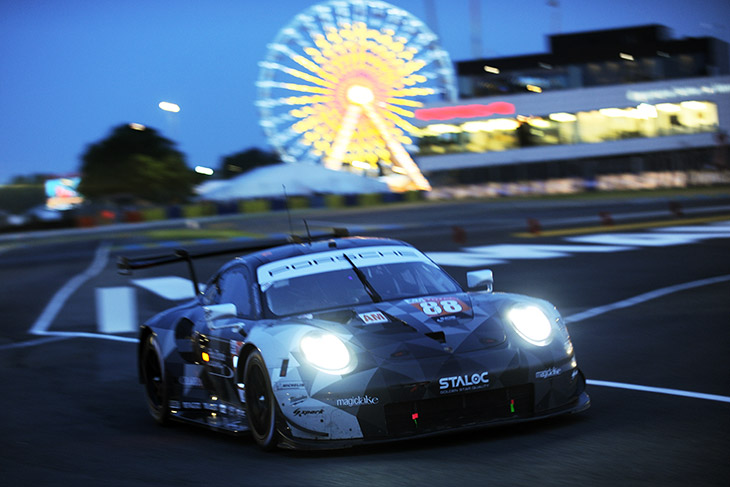 Cairoli, perhaps bolstered by that form, was quickly into his stride, and clocked a 3:50.728 that was rapid enough to split the GTE-Pro times early on for seventh overall in GTE. He then improved on that with a 3:50.669, which was not only the best part of three seconds quicker than the Larbre Corvette’s 3:52.843 of 2017, but also over a second faster than his own team-mate Matt Campbell in the #77 sister 911. Ben Barker’s #86 Gulf Racing car delivered a Porsche 1-2-3 in the Am category, but only three others had out-paced last year’s pole with half an hour gone.

The Spirit of Race 488 offered the closest challenge to the Porsches, the #54 Ferrari posting a 3:52.756 to stand fourth. Worthy of note was the fact that Cairoli’s time was quicker than all the Pro Corvettes, Astons and BMWs.

Aside from Bruni’s 1.5 seconds advantage overall, only a further 1.5 seconds covered the rest of the top ten in GTE-Pro at the halfway point. With notable effort from Dirk Muller in the #68 Ford GT, all of the Chip Ganassi Fords were now in close contention, with the #51 and #71 AF Corse Ferraris also mixing it.

Tony Kanaan brought the #67 Ford into its pit with a drive issue to spoil things for the UK side of the Ganassi garage. Meanwhile, the BMW Team MTEK appeared more confident, with the #81 M8 GTE settling into the 3:50’s.

If Corvette seemed in the same window of performance as BMW, the same could not be said of the Aston Martins, which appeared to be struggling by comparison. They were three seconds off the pace at best.

Darkness had fallen by then, but the track was still warm, and had the potential to improve, given that the detritus of a week’s road traffic was being replaced by fresh race rubber. Unlike 2017, however, the region has sustained a lot of rainfall in recent days, and the outright grip that drivers enjoyed a year ago simply wasn’t in evidence. That was proven by the inability of the LMP1 cars to match the times set in 2017, while enhanced mechanical performance seemed to be paying dividends in GT.

As the session ran on into its second hour, times behind the pace-setters continued to improve, with more and more of both GTE categories getting the better of last year’s times. By the time the session came to a close, thirteen out of seventeen GTE-Pro runners had posted times that would have claimed pole in 2017. That left the Corvettes on the borderline, and the Astons with much to prove.

There was a similar tale in GTE-Am, where the #90 TF Sport Aston had shown promise earlier in the day, but arrived in pit lane with a left rear puncture and, apparently, a loss of rotation in the affected wheel. The crew resorted to dollies to get the stricken Vantage back to the garage, where it was repaired, and rejoined the session, but would end the day 12th in GTE-Am.

Here the category was again dominated by variants of the new Porsche 911 RSR, but only the top five bettered last year’s pole. The Stuttgart marque was not without concern however. Having shown particularly well in Free Practice, the #93 GTE-Pro works car was down in thirteenth, some four seconds off the leading Pro time set by its sister car, despite having had reasonable track time. Improvement did come, late in the session, from Patrick Pilet, who took seventh in class as the session neared its remaining ten minutes.

The chequered flag heralded the arrival of the midnight hour, and amazingly, Bruni’s flying lap and new lap record from those opening minutes still held the top slot in GTE-PRO, but Ford certainly has the pace and is in contention. Ferrari ended the session in touch with the pace, but other teams will be wondering how to improve ahead of tomorrow’s four hours of running. With weather a debatable factor, we may potentially have seen pole positions set tonight in both classes.