The Toyota Gazoo Racing team continued to lead and build their lead at will during the sixth hour of the 24 Hours of Le Mans.

After the safety car and punctures seemed to have put the two cars back on the same strategy, the team spilt the driver stints with Fernando Alonso getting out after a double stint with Jose Maria Lopez continuing on.

Kazuki Nakajima took over the leading #8 Toyota TS050 and continued to lap easily in the 3:22 range, building a small gap to Lopez in the #7.

Nearing the end of the hour, Nakajima pitted and the team replaced the front nose. This let Lopez back into the lead until his stop where he handed the car to Kamu Kobayashi. The duo held more than two laps on the #17 SMP Racing BR1.

In the #17 SMP Egor Orudzhev jumped out of the car after a long run in the car giving it over to Matevos Isaakyan.

Fourth was Gustavo Menezes in the #3 Rebellion R13 ahead of team-mate Neel Jani in the #1 Rebellion.

Jani put in the car’s fastest lap during the period with a time of 3:20.046, still some 2-3 seconds off the fastest laps of the Toyotas.

For the #10 Dragonspeed, there was an adventure over the gravel at the Dunlop chicane for Regner van der Zande. He understeered wide went over the curb and gravel with the car making a slight jump on the way.

For van der Zande, however, he was able to bring the Dragonspeed above the LMP2 leader, meaning the top six cars in the race are LMP1s. He pitted at the end of the hour, and remained there at the time of writing, dropping the car down the overall order. 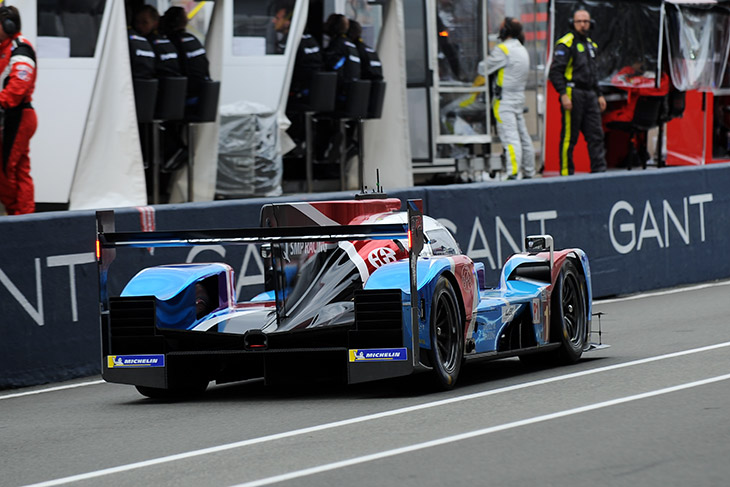 The CEFC TRSM Racing Ginettas continue to circulate in 17th (#5) and 21st (#6) overall. The #11 SMP Racing #BR1 completed a trouble free stint of the race after spending a couple of hours in the garage with sensor issues.

Thiriet in the #36 Signatech Alpine had been involved in a tactical battle with the #23 Panis Barthez Competition Ligier with Timothé Buret behind the wheel.
The two would swap positions depending on their pit stop cycle and this spin would undoubtedly hurt the Alpine squad.

Thiriet pitted handing over to Nico Lapierre, dropping the team down to fourth behind the Panis Barthez car and the #48 Idec Sport Oreca with Paul Loup Chatin at the wheel.

For Juan Pablo Montoya in the #32 United Autosports Ligier, there was drama at Indianapolis after he nosed into the wall and brought out a slow zone. He would get the car out of the gravel and back to the pits. Montoya is running 12th in class after that episode.

After the frenetic excitement of the previous hour, thanks largely to the deployment of the safety cars and the ensuing throng of action, the sixth hour began with an almost surreal air of calm. At least superficially.

Digging deeper, it was soon apparent that the individual battles were just as intense, and just as closely-fought as ever before. This was especially true of GTE Pro, where the #92 Porsche continued to enjoy a frankly enormous lead. A crossover between luck, being in the right place at the right time, and clever tactics had enabled the team to get the Pink Pig back out with a lead of almost 100 seconds.

If that advantage seemed overly generous, the margins between second, through to tenth, couldn’t have been closer. The widest gap between any of these players stood at a mere seven seconds, but several could be counted in tenths.

The #81 BMW, Catsburg still at the wheel, held second by a fairly relaxed 4 seconds from the #93 Porsche in the hands of Earl Bamber. The Kiwi had plenty to occupy his rear-view mirrors, however, in the form of Richard Lietz, weaving in his slipstream and holding 4th for the #91 works Porsche. Félix da Costa was fifth in the second BMW, albeit a lengthy seven seconds behind, but Giovinazzi had the #52 AF Corse Ferrari tucked tightly under his (admittedly generously proportioned) rear wing.

It’s unlikely the Italian was focused too hard on the BMW’s rump ahead of him, as the greater threat was coming from a very determined Joey Hand in the #68 Ford GT, so close behind that Giovinazzi was having to defend relentlessly, making the svelte F488 appear far wider than it truly was.

The inevitable, and it would only have been a matter of time before Hand got through, was avoided by the simple expedient of diving into the pitlane, which the Italian did at the end of the 80th lap, where he joined several of his peers, making this the sixth scheduled fuel-stop for the GTE Pro contenders.

The arrival of this pitstop window disrupted what had become an enthralling spectacle, and it would be the top of the hour before the true positions were revealed once more. For some, it was time for a breather.

By comparison with GTE Pro, the race in Am had settled down into something approaching a procession, although there were one or two positions that were under close contention.

The #77 Dempsey-Proton Porsche continued to lead the class by another generous margin; almost three-quarters of a lap from the #56 Team Project 1 Porsche #56. Fighting back and now running third was the #54 Spirit of Race Ferrari, just five seconds in arrears, but with only three seconds over the chasing JMW Motorsport F488 driven by Briton Liam Griffin.

These three, each intent on third place, were some 60 seconds or more clear of Dalla Lana in the Aston Martin Racing Vantage #98 in fifth. The Keating Ferrari #85 held sixth, within sight of the Aston, but clear enough of the Ebimotors Porsche #80 in 7th and the Clearwater Racing F488 #61 in eighth.

Just before the hour the leading Dempsey-Proton Porsche headed into pitlane for a routine stop, but able to rejoin, still heading the class, with slow zones in place on two sectors of the track.