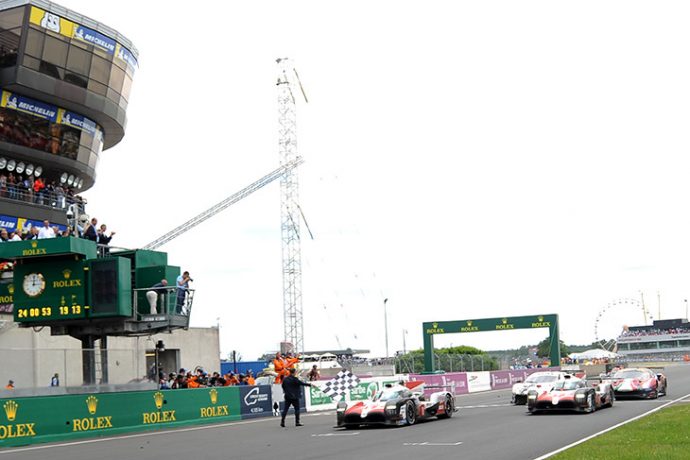 Kazuki Nakajima brought the #8 Toyota across the line to break Toyota’s curse at Le Mans, winning the race with Fernando Alonso and Sébastien Buemi. They completed a total of 388 laps.

They beat their teammates, Kamui Kobayashi, Jose Maria Lopez and Mike Conway, by two laps. Third, and first non-hybrid home, was Gustavo Menezes along with Mathias Beche and Thomas Laurent.

The #3 Rebellion R13 was 12 laps off the outright lead and 1 minute 40 seconds ahead of their teammates (prior to preparing for the formation finish), the #1 Rebellion R13 of Neel Jani, Bruno Senna and André Lotterer.

The #5 CEFC TRSM Racing Ginetta G60-LT-P1 managed to make it across the line with Charles Robertson, Michael Simpson and Léo Roussel. They had to stop again with battery and alternator problems in the last hour.

It was a tough end for Jenson Button and the #11 SMP Racing BR1 team, with retirement coming through engine failure with just 54 minutes remaining.

It was an utterly dominant performance for the #26 G-Drive Racing ORECA. Jean Eric Vergne brought the orange machine across the line, taking the win with Andrea Pizzitola and Roman Rusinov. They led for the vast majority of the race, completing 369 laps.

Second in class was the #36 Signatech Alpine Matmut Alpine A470. Nico Lapièrre brought the car across the line to achieve a podium with André Negrão and Pierre Thiriet. They were ahead of the #39 Graff-SO24 ORECA 07 with Tristan Gommendy bringing the car home. He shared the car with Jonathan Hirschi and Vincent Capillaire.

Importantly for the World Endurance Championship, the Signatech Alpine was the first WEC car home.

Just outside the podium was the #28 TDS Racing ORECA 07 with Loïc Duval. There was a massive final-minutes battle between the TDS and the Graff car with Duval taking up to 4 seconds out of Gommendy in the final laps. Ultimately though, the Graff-SO24 car held on by just a second. Gommendy had to pull out all the stops and put in the his best lap of the race on the penultimate lap.

The first Liger P217 home was that of the #32 United Autosports, fifth in class. Ligier had been looking strong for a podium with United Autosports or Panis Barthez Racing, but bad luck stood in their way. The best Ligier was five laps off the winning car.

Racing Team Nederland #29 was the first Dallara 217 home, eighth in class and 12th overall. They were 13 laps off the pace of the G-Drive car.

In total, there were 15 finishes in LMP2 with #50 Larbre Competition Ligier being the last classified runner despite Erwin Creed having a lazy spin inside the last hour.

Otherwise, the #35 SMP Racing Dallara took a 10 second stop and hold penalty for an engine cut and receiving outside assistance.

Heading into the final hour, and there still appeared to be plenty to fight for in GTE-Pro, where four contenders remained on the lead lap.

The race-dominant #92 headed into pitlane at just gone quarter-past. The slightly grubby-looking Pink Pig was followed in by the #91, the #66 and the #67 – all the four key players in the race completing what would be a final stop for fuel. The gaps, with forty minutes to go, stood at almost two minutes, 13 seconds, and just on a minute respectively. Christensen Makowiecki, Müller and Tincknell the drivers tasked with taking their cars to the chequered flag.

Over the course of the ensuing forty minutes it became clear that the teams had accepted the status quo, and this was going to be the order to the flag. The gaps between the four remained fairly constant as they traded closely-matched lap times. A smattering of final pitstops by others in the class did nothing to disrupt the finishing order. 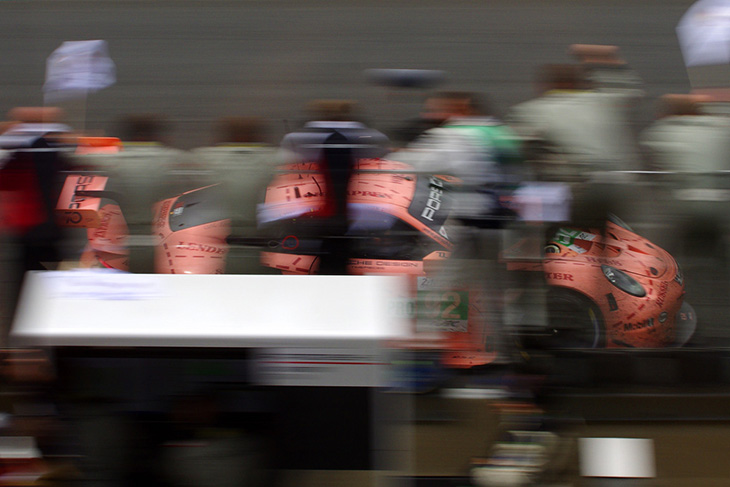 The race overall has never been a classic, and perhaps fell short of expectations, but the teams in GTE can think themselves among the stars of the 2018 Le Mans 24 Hours. When the TV editors sought out on-track action, they typically found it in the GTE category. The first quarter of the race saw inter-marque rivalry at its very best, with the four ‘works’ Porsches, all four Fords, AF Corse’s stable of Ferraris vying for the top positions, joined, maybe unexpectedly, by an impressive debut showing from the BMW M8s. The Teutonic majesty of these large cars belied their speed and agility, and they gave chase with vigour during the opening hours.

Not to be overlooked was the contribution from Corvette, a team that has so often tasted victory here at Le Mans, and which challenged strongly again this year, taking a richly deserved fifth at the flag, third in the manufacturer’s stakes.

The dominance – and it has been a dominant display – of the two retro-liveried Porsche 911 RSRs has been a surprise. There was some speculation that this celebratory gesture from Porsche might have been more of a marketing exercise by the Stuttgart PR department, but any who truly believed that, didn’t know Porsche. This is the name with more Le Mans wins behind it than any other, and no Porsche factory-entered car at Le Mans was ever placed upon the grid without the determination to win. 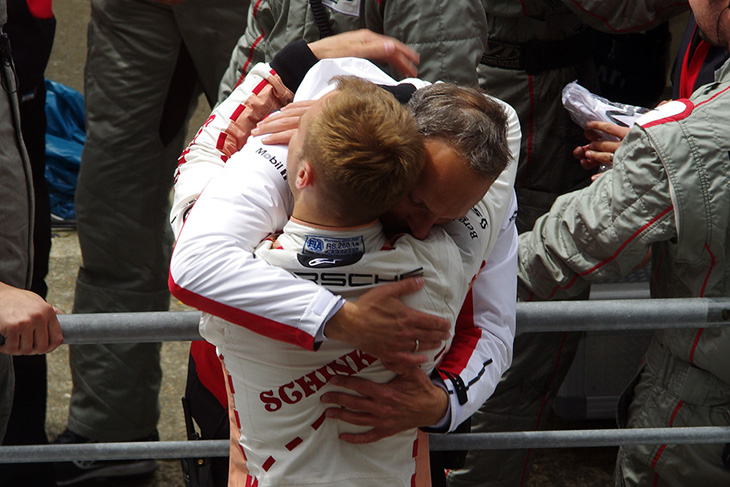 More might have been expected last year’s class victors, Aston Martin, but this was a brand new effort from AMR and faced many uncertainties. It was widely believed that the car’s poor showing in practice and qualifying was a deliberate ploy to gain sympathy, and a BoP break, but the evidence suggests that this is a project in the early stages of its development. The pace hasn’t been there this weekend, but no doubt work will be done, lessons learned, and the victories will indeed come.

Then final pitstop for the GTE-Am leader came at 14:22, Christian Ried taking over from Matt Campbell for the run to the flag. The Dempsey-Proton #77 had more than four minutes in hand over the second-placed Spirit of Race Ferrari, #54, and despite the best efforts of Giancarlo Fisichella, the leader’s advantage made the win look secure, mishaps aside. Second, however, was a more open question, and Jeroen Bleekemolen needed to make up only 30 seconds to threaten Fisichella for the second podium step.

Pat Long’s final stop came a little later than the three ahead, but the driver who’s been the star in the car remained in the cockpit for the final stint. Proton Competition would have to be satisfied with fourth place for the #99, but it had been a good run from the back row of the grid.

After almost 24 hours of hard-fought racing, there seemed little appetite for pushing any harder to the finish, and just as the podium in Pro appeared to have been settled with an hour to go, the finish order in GTE-Am never looked in doubt – and less so after Bleekemolen pitted with twenty minutes remaining and dropped back from Fisichella’s Ferrari.

As a manufacturer, Porsche didn’t have the race all its own way in GTE-Pro, and while the win by Dempsey-Proton’s # 88 was indeed emphatic, the laurels of success have been spread more evenly between the various marques, with Ferrari vying throughout the race for the podium steps.

If you have been, then thank you for following us through this marathon. After more than 24 hours of writing, the brain goes a little numb, words are harder to find, and the thread is sometimes elusive. We hope you’ll forgive us the errors, oversights and typos, and that you’ll join us again on DSC this time next year … if not next week.