With his victory for Toyota Gazoo Racing in the 86th running of the Le Mans 24 Hours, Kazuki Nakajima, Toyota’s second-generation Japanese racing star, has become only the third driver from Japan to score an overall victory in the fabled Grand Prix d’Endurance. The fourth to win any leg of the Triple Crown of automobile racing, along with Indy 500 winner Takuma Sato.

Nakajima is now also the newest of a somewhat obscure, yet growing fraternity of drivers who have raced in the Super GT Series (formerly the All-Japan GT Championship/JGTC) and won the Le Mans 24 Hours.

Cross-pollination between Le Mans and other top-flight sports car racing championships is common, of course, but with Super GT seeing an unprecedented sustained growth in international popularity, some might be surprised at the quality and the depth of this group of drivers, eleven in total now including Nakajima.

Where better to start than with his compatriots who first blazed the trail? 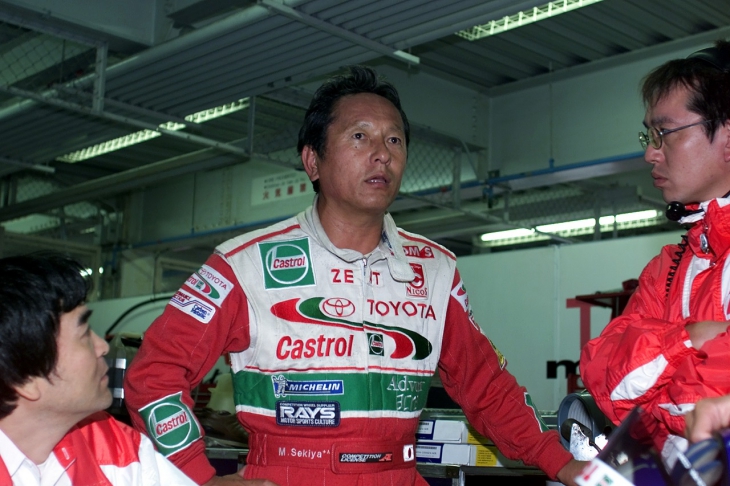 Masanori Sekiya, of course, was the first Japanese driver to win the Le Mans 24 Hours, driving for McLaren and Kokusai Kaihatsu (Lanzarote) Motorsport in 1995. He fell in love with the great race from his first visit in ‘85, marrying his fianceé Rasui Hoko in ‘87, and paying tribute to his late friend and teammate Hitoshi Ogawa on the podium in ‘92 after finishing 2nd.

In the context of the 1995 Le Mans 24 Hours, Sekiya played more of a supporting role behind co-drivers J.J. Lehto, the recently-displaced F1 veteran who broke out over the course of the ‘95 race meeting, and Yannick Dalmas, who’d now won three of the last four Le Mans 24 Hours.

But back home, Sekiya’s victory was a landmark moment in Japanese motorsport. And the signature victory in a legendary racing career that also saw him win two Japanese touring car titles, multiple races in the old All-Japan Sports Prototype Championship, and in the JGTC, including the first victory for the Toyota Supra in GT500. Even if his Le Mans victory didn’t come in a Toyota, he’s still a beloved legend for the marque, and a mentor to the next generation of drivers, such as Nakajima. 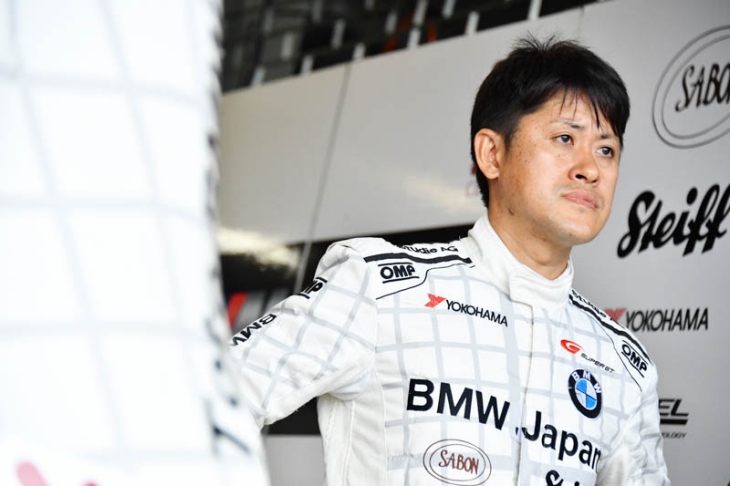 And the second was Seiji Ara, who held off the charge of multiple F1 Grand Prix race winner Johnny Herbert over the final hour in the battle of the customer Audi R8s in the 2004 Le Mans 24 Hours, winning by under a minute’s margin.

The victory for Audi Sport Team Goh was just another installment in the incredible legacy of the R8 prototype in competition, and Ara’s most famous win of his career, which came just weeks after he’d scored his first GT500 victory at Sportsland SUGO for Toyota Team Cerumo.

Through the end of 2017, Ara entered 131 Super GT races from 2001-09 and 2011-17, spending his first 12 seasons in GT500 before spending his last four (so far!) with BMW Team Studie in GT300. Ara is still racing, these days in the Pirelli Super Taikyu Series, and it surely won’t be long before he finds his way back onto a Super GT grid, good health willing. 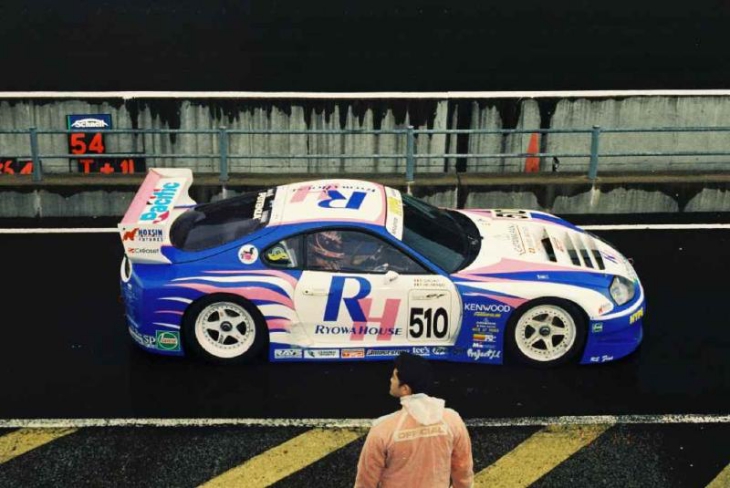 A couple of the drivers’ Le Mans victories pre-date the founding of the JGTC in 1994, but are still worthy of mention: Bertrand Gachot was part of the first Japanese-entered Le Mans winning effort in 1991 with Mazda, but very few know about his final efforts in competitive racing in GT500, with Toyota in 1996 and 1997.

Gachot raced for FET Racing Power Craft for the final three rounds of the 1996 season, and for Ryowa House/Pacific Team Cerumo (above) in 1997 before hanging up his helmet after 2 top-5 finishes in 9 races.

Then there’s the case of John Nielsen and David Brabham, Le Mans winners nearly two decades apart, but united in a single championship season in the 1996 JGTC season. 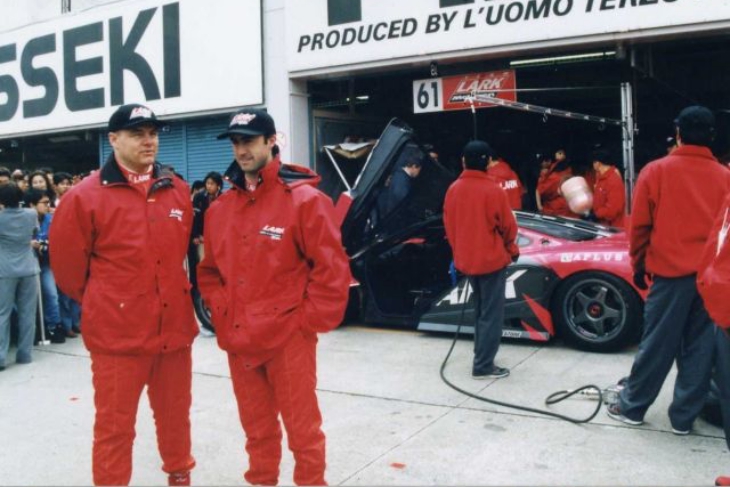 Nielsen (left) won Le Mans in 1990 for TWR Jaguar Racing, capturing the marque’s seventh and most recent victory in the great race in the twilight years of the Group C era. Brabham (right), the second-generation racing star, had to wait until his sixteenth start in 2009 for Peugeot Sport to claim his first overall victory (though he’d won the GT1 class for Aston Martin in 2007 and 2008).

What unifies these two champions for our exposition is one magical season in the new-to-Japan McLaren F1 GTR in 1996, the same car with which Sekiya won Le Mans the year before, driving for Kazumichi Goh, the owner of the Audi with which Ara would win Le Mans in 2004. 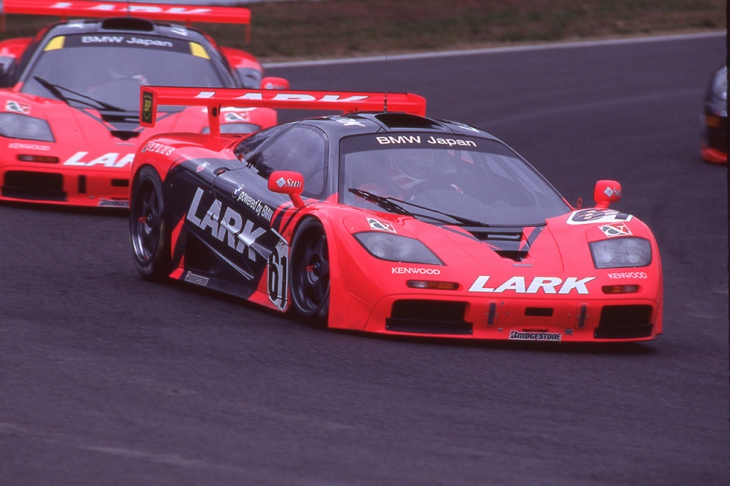 McLaren’s new challenger was so dominant in ‘96, winning 4 of 6 races, and taking pole position and fastest lap in all 6 races, even after having its horsepower slashed by one-third and being loaded with hundreds of kilos of weight handicaps. More handicaps proposed for ‘97 effectively ran them out of town, but not before forcing the Japanese manufacturers to rapidly advance the development of their own challengers, in turn, creating a formula even faster than GT1. Peer through the windshield of this 2001 Denso SARD Toyota Supra and you’ll see the confident eyes of 23-year-old newcomer Romain Dumas, winner of Le Mans with Audi in 2010 and Porsche in 2016.

Just weeks prior to his first of now eighteen consecutive Le Mans 24 Hours starts, Dumas was called up to Toyota Team SARD for his first ever venture into sports car racing – right into the deep end of GT500, and for a little extra pressure, replacing a former three-time champion in Masahiko Kageyama to boot!

Dumas’ best finish in his brief GT500 stay was a fourth-place finish in the final round at Central Park Miné Circuit, but what a career the Frenchman has enjoyed since, with victories at the 24 Hour races of Spa-Francorchamps and the Nürburgring, the 12 Hours of Sebring, Pikes Peak, and the World Endurance Drivers’ Championship to further bolster his Hall of Fame credentials.

Just prior to that 2010 race, Audi Sport Team Joest began to put together the pieces that would lead their LMP1 dynasty through to the final years and victories. And the key pieces would be assembled through Super GT championship successes. Benoît Tréluyer won the 2008 GT500 Championships for Nissan and NISMO. He’d already made five starts at Le Mans, four with Pescarolo Sport, but it was in Japan where Tréluyer truly forged his reputation as one of the most adaptable and uncompromising drivers around.

And a young German named André Lotterer was starting to impress in Japan as well, winning the 2006 and 2009 GT500 Championships for Lexus Team TOM’s, and making a stellar debut in the 2009 Le Mans 24 Hours driving Colin Kolles’ privateer Audi R10 as another well-rounded, consistent, and mature driver with incredible pace in any set of conditions. Tréluyer and Lotterer, along with Marcel Fassler, were assembled at Audi in 2010, and a legendary trio was founded.

Adding groundbreaking race engineer Leena Gade in 2011, Lotterer, Tréluyer, and Fässler won the 2011, 2012, and 2014 Le Mans 24 Hours as a unit, then added the inaugural 2012 FIA World Endurance Championship titles to their name, just for good measure. Duval took the overall victory in a tragedy-marred 2013 race, then went on to win the World Endurance Drivers’ Championship that same season. He also was part of the team that won Audi’s final LMP1 race in Bahrain in 2016, joining Lucas di Grassi, and another former Super GT driver, Oliver Jarvis. And then, there’s the man who shattered the mould.

An All-Japan Formula 3 Champion, a race-winner in Japanese Formula 3000 (now Super Formula), a two-time runner up in the Japanese Touring Car Championship in both Group A and Super Touring formats, and in 1994, a JGTC newcomer in an upstart series driving Blitz Racing’s skunkworks Toyota Supra. By 1996, he was driving a proper, factory-blessed Supra for a full season with FET Power Craft Racing, and then drove his last race in the series after a life-changing 1997 in which he was named as an injury substitute in Joest Racing’s Porsche WSC95 prototype for his very first Le Mans 24 Hours start. Which he subsequently won.

You might have heard of him – he’s Tom Kristensen, “Mr. Le Mans,” the record-breaking, history-making, nine-time winner of the Le Mans 24 Hours, and six times a winner of the 12 Hours of Sebring, also a record. Tom Kristensen’s time in what is now Super GT was only nine races long. He never won a race or finished on a podium, in fact, he had only two top-five finishes to his name. But Kristensen is forever associated as one of the greatest drivers that ever raced in the series.

Now add Kazuki Nakajima’s name to the list of Super GT drivers that have forever etched their name into Le Mans lore and legend.

And in time, with Super GT drawing in so many great young talents from home and abroad, and a new premier class formula on the horizon for 2020…who knows how many more will join them?