A proposal that’s been over five years in the making is now realised.

Saturday morning at the Norisring Street Circuit in Nuremberg, Germany, both Masaaki Bandoh, chairman of the GT Association (GTA), and Gerhard Berger, chairman of the ITR, met the press and formally announced that the GT500 class of the Autobacs Super GT Series and the Deutsche Tourenwagen Masters series (DTM) will officially unify under the set of technical regulations known as “Class 1”.

“I would like to thank Mr. Berger, DTM and Super GT manufacturers, and all concerned for your dedication to this project,” said Chairman Bandoh at Saturday’s press conference. “As you can see from the great success of our show runs done in both Germany and Japan last year, we have further deepened our partnership.” This in reference to the demo runs last October at the Hockenheimring in Germany, and the following month at Twin Ring Motegi in Japan.

“I am deeply convinced that all fans of motorsport across both countries, and all over the world, will come to appreciate the joint races that we have planned, and that Super GT and DTM will continue to develop greatly into the future,” Bandoh added.

DTM will adopt the Class 1 regulations from the 2019 season, which includes the switch to the two-litre, turbocharged, four-cylinder engines that produce in excess of 620 horsepower, which have already been used in GT500 since 2014.

There will also be extensive aerodynamic overhauls, particularly to generate more cooling to the engine, and the brakes, which will need to slow the cars down from speeds projected to hit 300 kilometres per hour with the more powerful engines. And the front splitter, rear wing, and rear diffuser will also be modified to conform with the current GT500 platforms as well.

Super GT will then modify its existing GT500 regulations in 2020, with an aim to suit the longer-distance races of Super GT, to complete the Class 1 unification. 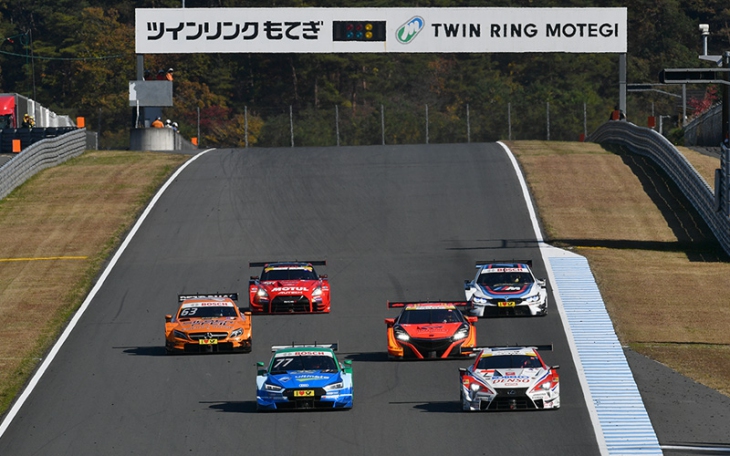 And after much speculation, it has been announced that Super GT and DTM will hold two joint-promoted exhibition events starting in 2019, one held in Germany, and one held in Japan.

The format for the races will resemble that of the DTM, with two sprint races. There will be no driver changes, but a mandatory stop for fuel and a four-tyre change will be required. For these race meetings, a one-off “Balance of Performance” (BoP) will be created to put the DTM and Super GT runners on an even playing field.

Dates and venues for the races have not yet been announced. “We’re currently working on the outline of next year’s [Super GT] calendar,” said Bandoh. “We’re putting the highest priority on this collaboration between DTM and Super GT to establish this final race next year. We’ll also have to discuss this with the Japan Automobile Federation (JAF) and the other racing categories to harmonize with their calendars.”

“As you know, we are always planning around the WEC and the Formula 1 Japanese Grand Prix in October. My intentions are that all parties will put the highest priority on the joint race between Super GT and the DTM.”

With the unification of two very similar yet different series in terms of regulations, GTA Chairman Bandoh was asked a number of challenging questions about the future of Super GT. 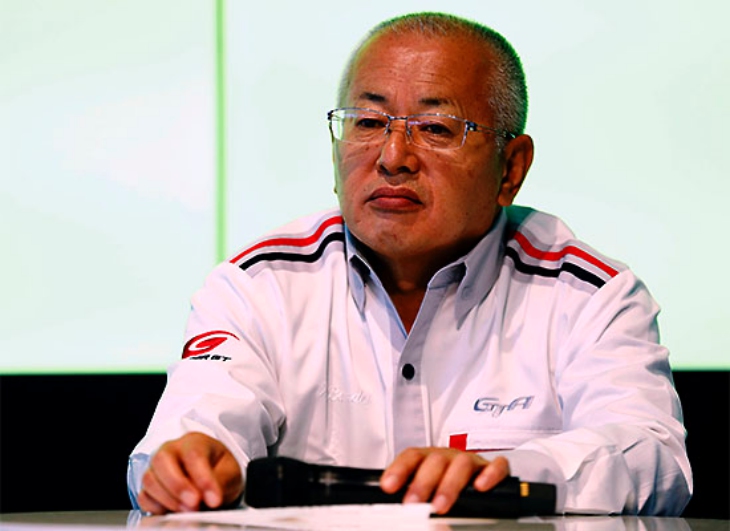 The first was about the impact these races would have on Super GT’s open tyre war, one of the few premier racing series left with open tyre competition between Bridgestone, Yokohama, Michelin and Dunlop.

“Our plan (for the joint races) is to use the format adopted by DTM when we come to Germany. Mr. Berger will select the tyre that’s going to be used in the German event. As for the race in Japan, we would use our rules which allow for tyre competition. However, each manufacturer will only be allowed one tyre compound for that race.”

Then as it pertains to the future of Honda’s GT500 programme – in particular, the future of their mid-engined NSX-GT, which does not fully comply with the Class 1 regulations that specify that all cars must be front-engined.

“The current NSX-GT is allowed to run in GT500. However, if Honda wishes to participate in European events, or if these joint races become bigger in the future, I would expect them to switch to a front-engined car,” said Bandoh.

“Of course, it doesn’t mean that they have to do that right now. But in case these events continue on and grow in stature, and you would need to accomodate the ideas of the other manufacturers, then I think it is okay to prescribe these requirements.”

As for whether or not the mid-engined Honda NSX-GT will continue to compete in 2020 with the next revision of the GT500 regulations, Bandoh replied succinctly: “Yes.”

Chairman Bandoh also hinted that the joint-promoted event(s) would preferrably held after the end of the 2019 Super GT season, in November. “There are so many international motorsport events in Japan, so we want to avoid that month and look towards November.”

As for a preferred venue for the Japanese leg of the DTM/Super GT races, Bandoh expressed his desire to see them compete at Fuji Speedway: “It would allow us to reach the highest top speeds of nearly 300 kilometers per hour.”

Of concern to some would be the unclear future of the DTM after 2018, which is set to lose Mercedes-Benz as a manufacturer after the season and has yet to find a third manufacturer to take their place alongside BMW and Audi.

“I think it’s no secret that we are facing difficult times after the withdrawal of Mercedes,” said Chairman Berger. “Our challenge is to fill the void that they are leaving. We’ve been in many talks. As of now, there aren’t any concrete solutions to the problem, but I am a sportsman and I am used to confronting problems until they are solved. I do think that we are going to solve those problems in the end.”

As for Super GT, nothing integral to the series that has drawn the world’s attention to it will be compromised for the sake of the unified Class 1 regulations – which will be welcome news to their dedicated fans at home in Japan and abroad.

A very special thanks to friend of Super GT World (and DSC by extension), known to the world as Geinou, who was at the GTA/ITR press conference in Germany and provided much of the quotes to this piece – and, on a personal level, was one of the people who inspired me to take the chance and start covering Japanese motorsport at an extensive level.

Images courtesy of the GT Association and DTM