Martin Rump and Franky Cheng both claimed their maiden Blancpain GT Series Asia victories at Suzuka this afternoon after their Absolute Racing Audi led home a top-six comprising as many different GT3 manufacturers.

The Craft-Bamboo Porsche shared by Sandy Stuvik and Shae Davies finished second after starting fourth, while championship leaders Martin Kodric and Dennis Lind completed the overall podium despite serving a 10s pitstop success penalty. Ferrari, Mercedes-AMG and Nissan were all close behind.

The result of this weekend’s opening race owed much to Kodric and Lind’s 10s pitstop success penalty, which the championship leaders had to serve after finishing second at Buriram. Lind had been leading up to that point thanks to winning the drag race against pole-sitter Rump into Turn 1 where the Huracan swept around the outside. 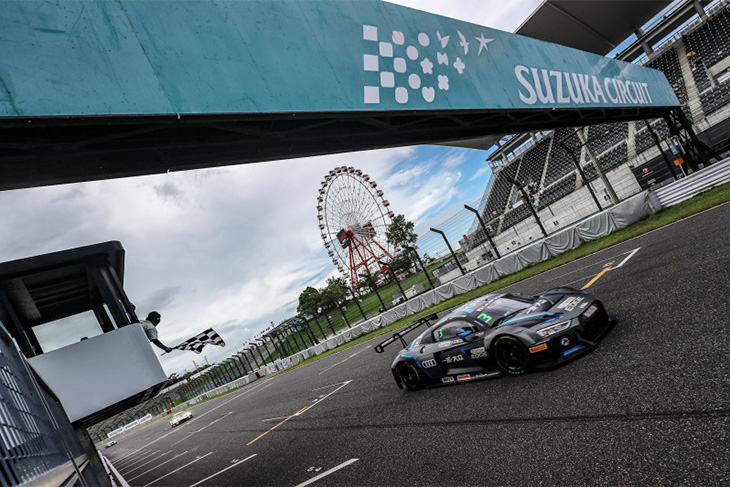 “This win has been a long time coming,” said Rump. “I had some bad luck last season and wasn’t always able to show my pace, but I knew that partnering with Franky [Cheng] this year would give us a chance to something. We’ve enjoyed a consistent start to the year and had some opportunities but this is a great way to open our accounts. I did see Dennis [Lind] coming on the left-hand side at the start so gave him room and then focused on staying with him, knowing the success penalty would work in our favour.

“We were running together before the traffic held me up, but that’s way it goes, someone always wins and loses in those situations. What matters is that we stayed close enough to take the lead when it mattered.”

The top-two had soon established a reasonable gap to their pursuers but were seldom more than a second apart. Indeed, Rump appeared to be gaining on the Dane as the pit window approached but was badly held up by the battling GT4 leaders through Sector 1, which helped the Lamborghini establish a 4s advantage before the stops.

That, of course, wouldn’t be enough to overcome the car’s 10s success penalty, and sure enough, Cheng emerged in the lead. However, he was probably surprised to find Stuvik’s Porsche right behind after Davies’ quick in-lap and Craft-Bamboo’s banzai pitstop propelled the car up to second.

After surviving Stuvik’s early onslaught Cheng was able to ease away over the remaining 25 minutes to claim victory by 0.870s, while Kodric crossed the line just ahead of Nick Foster’s HubAuto Corsa Ferrari, which Hongli had earlier brought back into contention, and Patric Niederhauser aboard the GruppeM Mercedes-AMG.

A puncture for Hamaguchi – the result of contact with Edoardo Liberati’s Nissan, at the end of his opening stint helped KCMG’s other GT-R NISMO of Yuke Taniguchi and debutant Alex Imperatori claim Pro/Am class honours and sixth overall thanks to the latter’s late race pass on Mitch Gilbert at Turn 1. The OD Racing Audi Gilbert shares with Aditya Patel still came home seventh ahead of Alexandre Mattschull and Raffaele Marciello’s GruppeM Mercedes-AMG, which served the full 15s success penalty during its pitstop.

Ryuichirou Ohtsuka started on pole but had slipped to third behind Kinoshita and Brian Lee by the end of lap one. The opening stint was characterised by the GruppeM Mercedes-AMG yo-yoing around the top-four before finally latching on to the leading BMW just before the pit window opened.

A 15s success penalty for winning at Buriram versus Team Studie’s unhindered pitstop allowed Jukuchou to emerge with a clear track behind him, and although Reinhold Renger worked hard to reduce the deficit, the BMW still took the chequered flag amidst jubilant scenes five seconds ahead.

Team-mates Ken Urata and Max Chen completed an excellent day for Team Studie by coming home third after also serving a success penalty, while Tony Fong and Lee’s TTR Team SARD Porsche ended up fourth ahead of Gilles Vannelet and Ringo Chong, who was spun around by Craft-Bamboo’s Mercedes-AMG before the pitstops.

The duo took advantage of a bizarre incident involving HubAuto’s Leo Ye Hongli who pitted from the lead by mistake at the third and final Safety Car restart. Edoardo Liberati and Florian Strauss came through from 15th to second in their KCMG Nissan, which finished ahead of Markus Pommer and Patric Niederhauser’s GruppeM Mercedes-AMG.

The consistency of three podiums had helped Lind and Kodric top the GT3 standings prior to round six, but the duo finally broke their victory duck in today’s 60-minute race to extend their overall advantage at 2018’s halfway mark. 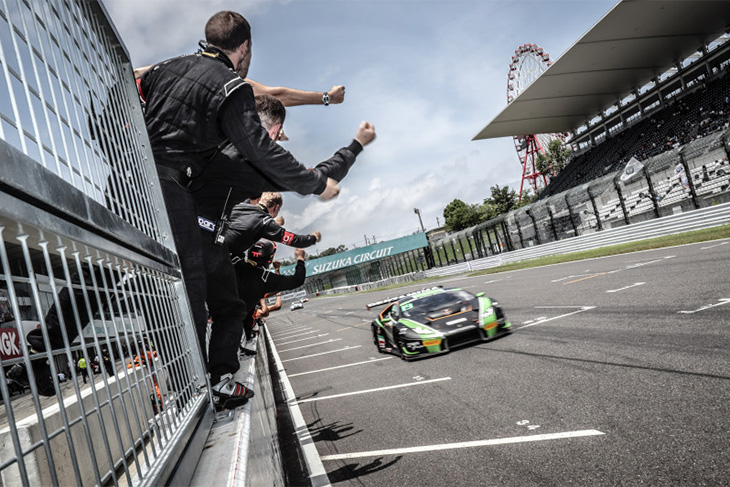 “We knew it would be a tough race starting from P5,” said Kodric. “I did everything I could: I made a really good start and was alongside my team-mate Marco [Mapelli], but obviously we didn’t want to do anything silly so I backed off and focused on maintaining the pace. We were well positioned at the pitstops but knew the penalty would cost us time, so Dennis [Lind] did a great job to move up the order. Then, when the Ferrari pitted again, I couldn’t believe it! Dennis was catching him anyway but it’s tough to overtake here. We’ve come close to winning a few times so we’ll definitely take it!”

However, their win also owed much to the woes of HubAuto Corsa whose two Ferraris controlled the opening stint. Nick Foster was particularly impressive out front after leading away from pole, managing an early Safety Car period and then establishing a small but comfortable advantage over team-mate Tim Slade.

That was until the #28 Ferrari collided with Daniel Au’s GT4 McLaren at the final chicane, which put both entries out on the spot and necessitated a second Safety Car period that coincided with the pit window opening.

At that point Foster led GruppeM’s Raffaele Marciello, FFF Racing’s two Lamborghinis of Marco Mapelli and Kodric, plus Niederhauser in the second Mercedes-AMG. Foster’s co-driver Ye Hongli duly emerged in the lead, while Lind’s 5s pitstop success penalty was sufficient to drop the Huracan behind Pommer, who moved up to fourth.

The new top-five also featured two Am drivers – Alexander Mattschull and Hiroshi Hamaguchi – who played their part in the final outcome. Pommer’s desperate attempts to overtake the Japanese opened the door for Lind to pass both drivers on the same lap before also relieving Mattschull of second and setting off after Ye Hongli.

2.4s separated the top-two when the day’s final Safety Car period – the result of Martin Rump beaching his Audi when Juwon Seo made contact – had the biggest impact of all. When the race went green Ye Hongli’s Ferrari was nowhere to be seen after the Chinese driver followed the Safety Car into the pits. Instead, it was Lind who exited the final corner with clear track ahead of him before going on to claim victory by 2s.

Behind, KCMG’s Liberati and Strauss fought through from 15th on the grid to take their second podium in three races. Strauss drove a clean opening stint amongst the hustle and bustle of the midfield and made up a couple of places before pitting. Liberati then emerged in seventh and used the remaining 30 minutes to move further forwards by passing Pommer, Hamaguchi, Mattschull and Seo.

Pommer finally found a way past FFF Racing’s Hamaguchi who drove brilliantly on home soil against the professionals to claim Pro/Am honours and fourth overall with Mapelli. Shae Davies and Sandy Stuvik made up five places between them en route to fifth aboard their Craft-Bamboo Porsche, which finished ahead of Mattschull/Marciello, Mitch Gilbert/Aditya Patel’s OD Racing Team WRT Audi (which started 20th), and Shaun Thong/Alex Yoong who served an early drive-through penalty for jumping the start.

The GT4 victory could have gone to any one of three crews during a fraught final 10 minutes. However, it was GruppeM who celebrated hardest after the third Safety Car period brought Reinhold Renger and Ryuichirou Ohtsuka back into play.

However, success penalties for Team Studie and GruppeM, whose cars pitted together, allowed Team iRace.Win’s Ringo Chong to lead Craft-Bamboo’s Frank Yu, Taiwan Top Speed’s George Chou and TTR Team SARD’s Brian Lee. While the top-two broke clear, Ohtsuka found a way past both Porsches before setting his sights on second. The gap appeared too large without assistance, which arrived when the final late Safety Car bunched the pack.

Ohtsuka duly completed the job by passing Chong and Yu, who came home second and third respectively. The erstwhile leading BMW shared by yesterday’s winners Jukuchou and Takayuki Kinoshita battled back from its maximum success penalty to finish fourth ahead of Taiwan Top Speed and Team Studie’s second BMW, which benefitted from TTR’s 30s post-race penalty.

Next up it’s Fuji Speedway, which hosts rounds seven and eight on July 21/22.