It’s July, and it’s time for the Spa 24 Hours once again. This year the Belgian endurance classic is celebrating its 70th anniversary, and with a bumper grid of GT machinery, racing as part of both the Blancpain GT Series and Intercontinental GT Challenge.

The entry list is mouth-watering, and should create great, hard-fought racing.

In the first Part of DSC’s Spa 24 Hours preview, we take a look at the teams and drivers that aren’t primarily focused on winning the race outright in Pro-Am, Silver Cup, Am Cup and Group N categories.

While these efforts may not get as much air time as the pro runners, there’s still a myriad of strong driver crews and well versed teams.

This year’s Silver Cup class consists of nine entries, spanning six marques, and features some of the best teams and drivers in the business. It’s set to be a very close fight, and one that’s near impossible to predict prior to the event.

The manufacturer with the most cars in the class is Lamborghini, with three Huracan GT3s, one apiece from Ombra Racing, Daiko Lazarus Racing and Barwell Motorsport.

Those who follow the International GT Open will be most familiar with the Daiko and Ombra crews. Daiko Lazarus is an interesting outfit, which used to compete in GP2. For the 24, they’ll race with a four-driver line-up of Artno Santamato, Frederico Leo, Stefano Gattuso and Nicolas Pohler, and providing the Huracan GT3 holds up over the course of the race should be in with a shout. 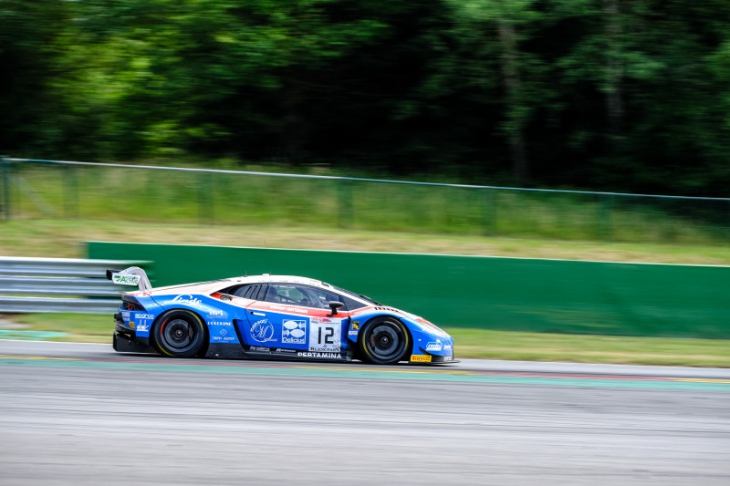 The only other marque with multiple cars is Mercedes, Black Falcon and AKKA ASP fielding a single AMG GT3 each.

Black Falcon’s crew features four capable drivers, three of which (Hubert Haupt, Gabriele Piana and Abdulaziz Al Faisal), won this year’s Dubai 24 Hour together, the other being Manuel Metzger, who narrowly missed out on winning this year’s Nurburgring 24 with the team, finishing second.

AKKA meanwhile, will also race with a very formidable, polished line-up of 2017 Blancpain Sprint Silver Cup title holders Fabian Schiller and Jules Szymkowiak, Briton Jack Manchester and German VLN regular Nico Bastian. With the AMG GT3 arguably being the best current car top to bottom, and these two line-ups in the field driving them, surely AKKA and Black Falcon have to be considered among the favourites here?

Audi, Aston Martin, Nissan and Jaguar are the other four marques in the class.

Front-running ADAC GT Masters team Aust Motorsport will race with Audi, and should be interesting to follow, with Loris Hezemans and Phillipp Frommenwiler headlinging its driver crew.

Then there’s the TF Sport-run Oman Racing effort with Aston Martin. Despite the V12 Vantage being at the end of its life as the brand’s primary GT3 car, it is still very much capable of winning races. With Ahmad Al Harthy joned by the rapid trio of Porsche Cup champion Charlie Eastwood, Euan McKay and Aston Martin factory driver Ross Gunn, surely this crew could be in the running for the class win? 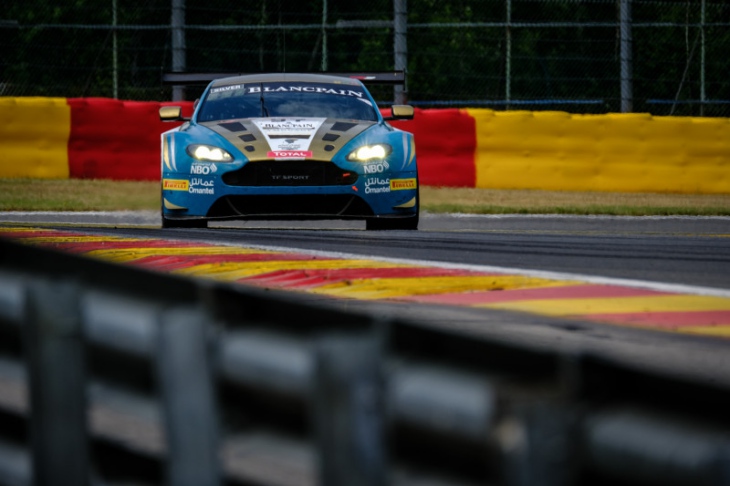 For Jaguar, the entrant is of course Emil Frey, the Swiss team still valiantly campaigning its G3 Jaguar after so many years of service. While its Lexus effort in the Pro class will be the team’s top priority its Silver Cup Jaguar still warrants some attention.

The car will be driven by Alex Fontana, Adrian Zaugg and Mikael Grenier, and should be among the favourites to win the Silver Cup class in the race. For the Jag, which has been improved upon year-after-year but hasn’t had the best record at Spa, could this year be a breakthrough performance? The car has again shown speed this season, leading the race at Monza, and if it can stay reliable could feature very high up the order at Spa indeed.

That leaves the #22 RJN Motorsport Nissan GT-R GT3, which is an older model, but one which still showes real flashes of pace. Like Emil Frey, RJN’s attention will mainly be on it new model racing in the Pro class, but its Silver Class entry does give the team another realistic chance to score a class podium.

The team race with its full-season crew of Struan Moore (who’s has been impressive all year, particularly in Qualifying where he’s often been the quickest driver in the car), former GT Academy winner Ricardo Sanchez, Jordan Witt and Sean Walkinshaw.

The entry which will likely recieve the most attention here is the Catrol Honda Racing NSX GT3. 18 years on from its last Spa 24 appearance, Honda is back with this effort at Spa, which will be run by JAS Motorsport. This weekend’s race is both the NSX GT3’s (which was launched at Spa last year) Blancpain GT and European 24-hour race debut, as part of a push from the brand’s customer programme. 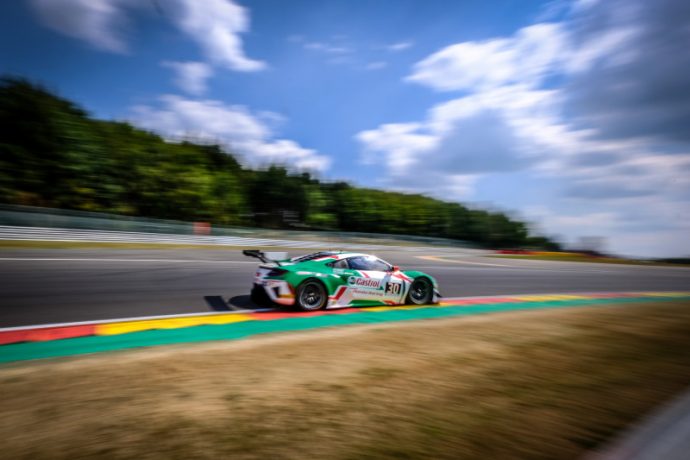 The car will compete in the Pro-Am class, with Bertrand Baguette and Esteban Guerrieri, ex-F1 driver Riccardo Patrese and Loic Depailler. This will be a very interesting entry to follow, and surely a fan favourite with its Castrol-livery. Whether or not it will be a contender in its first appearence though, remains to be seen…

Spa is set to be a very important race for Team Parker, as it battles for the Pro-Am title, the team currently sitting third, 10 points off the title leaders. Three sets of points are on offer during the 24, at six, 12 and 24 hours, meaning should things fall their way they could head to the final round of the season at Barcelona leading the championship. 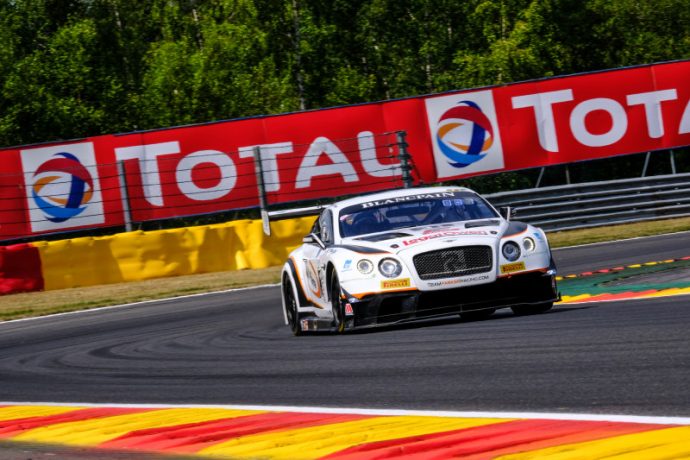 At the head of the standings is AF Corse, full season drivers Duncan Cameron and Matt Griffin leading the way after winning last time out at Le Castellet. It’s been a good season so far for Cameron and Griffin, not only in the Blancpain Endurance Cup, but also in the European Le Mans Series. They’ll look to continue their form and edge closer to the title, racing with regular teammate Aaron Scott and Rino Mastronardi.

BoP to one side, surely this effort is a real favourite to win the class here?

Strakka Racing though, will also be in the mix for the class win. It’s fair to say that after a tough year last year racing with McLaren, Nick Leventis and his team have re-discovered their form and began to achieve the results we always knew they could since switching to Mercedes.

In Pro-Am, the team sits second in the points with its #42 AMG GT3 of full-season drivers Leventis, Chris Buncombe, and Lewis Williamson, who will be joined by David Fumanelli for the race at Spa. The pieces are all in place, it’s a strong car, with a strong line-up.

Of the remaining cars in the class, Black Falcon’s #5 Mercedes will also be one to watch, though factory ace Adam Christodoulou has unfortunately forced to skip the meeting due to injury, and instead will be replaced by Tom Onslow-Cole, who nevertheless has speedn and plenty of experience racing AMG GT3s.

Ram Racing too, could spring a surprise, with TF Sport’s FIA WEC duo of Salih Yoluc and Euan Hankey driving with Felix Rosenqvist and Darren Burke, making for one of the stronger quartets. 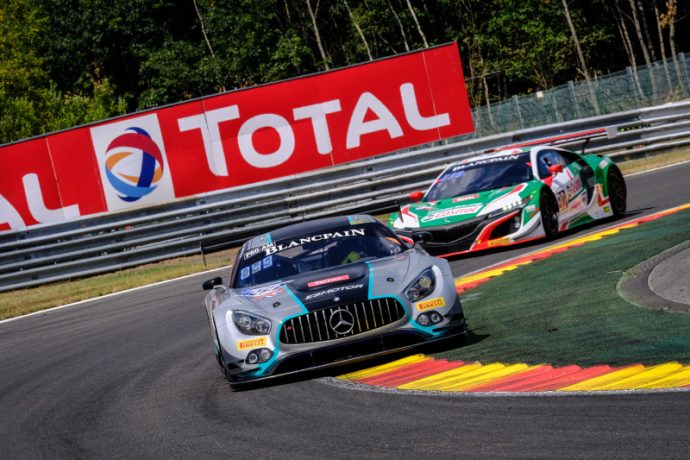 Like the Silver Cup, the Am field is a solid nine cars strong. The class should be well contested with lots of well known teams running the cars.

Variety is there, with seven makes in the field: Porsche, Mercedes, Audi, BMW, McLaren, Lamborghini and Ferrari. While it’s hard to pick a favourite here, there are some standout entries.

After scoring back-to-back class wins heading into the weekend, Garage 59, with its 650S GT3 of Chris Harris, Alexander West and Chris Goodwin looks to be in the running for the win and, the Am title. The catch, as ever, being the 650S GT3’s poor form at the race, in which it’s often run well in Qualifying, before hitting trouble in the race. 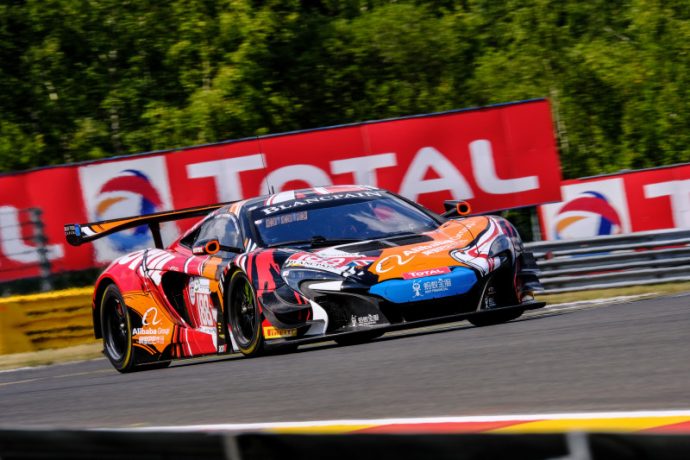 24H Series veteran team Herberth Motorsport should also be in the mix. Its line-up of Alfred Renauer, Wolfgang Triller, Edward Lewis Brauner and Jurgen Haring, if it stays consistent, could prove to be one of the better ones in the field. The team certainly knows how to win big 24 hour races too, and is always well drilled when under the pressure of the occasion.

Groupe National meanwhile, sees just four cars on the list. It’s still up for debate what Groupe N adds to the race, some say it’s unnecessary padding to an already high-quality entry, others like the variety. Either way, if the racing’s good, and the cars in question don’t play a part in affecting the outcome of the overall win, then it can be considered a success.

Three of the four cars in the class are Porsche 991 Cup cars, run by longstanding teams SpeedLover and Mulhner Motorsport, the only other car being a GDL Motorsport Lamborghini Super Trofeo.