In Part 1 of DSC’s 2018 Spa 24 Hours preview, we covered the Pro-Am, Am, Silver Cup and Group N entries, class-by-class. Part 2 on the other hand, will go marque-by-marque, as we look at the contenders for the overall win of this year’s 70th anniversary edition of the race.

You can view the full entry list to this year’s race HERE.

Aston Martin returns to the Pro category at this year’s Total 24 Hours of Spa thanks to a two-car effort from Swiss outfit R-Motorsport, with an accomplished roster of drivers set to pilot their ageing – but still capable V12 Vantages – which includes AMR factory men Nicki Thiim and Maxime Martin. 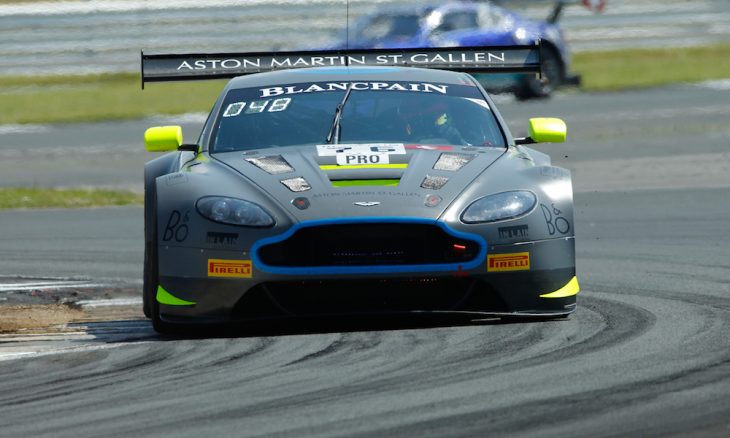 It’s set to be a big meeting for the team, which won at Silverstone in its second-ever Blancpain Endurance race (the result confirmed just recently), with a mildly tweaked line-up that sees Alex Brundle out and Dominik Baumann in. Any success here would serve as a table-setter for the new Vantage’s debut in 2019.

Following the driver change, Brundle explained to DSC that he is sitting out the Spa 24 Hours this year to focus on an unannounced 2019 project with the team, and was keen to make it clear that he is still very much a part of the effort!

For the first time in years, Aston Martin’s presence at Spa has a real buzz around it,

Reigning Spa 24 Hours winner Audi is back again in 2018 and searching for its fifth overall win with a huge seven-car Pro entry. 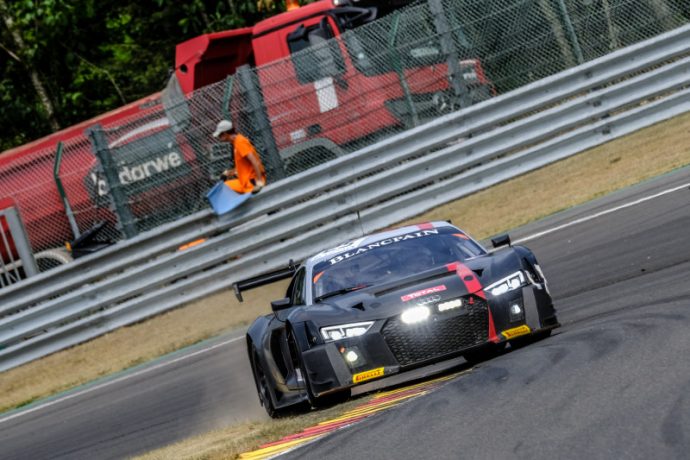 The German brand has committed three factory-backed R8s, one for defending winners Sainteloc Racing and a further two for Belgian team WRT .

WRT is gunning for its third win in its big local race, its hopes resting on two extremely strong line-ups, the first featuring Alex Riberas, Chris Mies and Dries Vanthoor, the other with Robin Frijns, Nico Muller and Rene Rast.

Sainteloc too, will defend its title with one of the strongest crews in the field, its #25 Audi of Markus Winkelhock and Christopher Haase who won with the team last year and Frédéric Vervisch.

Outside of the factory-blessed cars, WRT, Attempto and Land Motorsport are all bringing R8 LMS’ to the Pro class. And in amongst those cars are talents like DTM ace Jamie Green, multiple Le Mans winner Marcel Fassler and 2017 Le Mans GTE Pro winner Daniel Serra.

It’s an impressive line-up this year for Audi, which includes Spa-winning teams, and five past Spa-winning drivers. And even with the new evo-spec Audi R8 on the horizon, BoP permitting, the ‘Four Rings’ have a chance of taking the crown once more.

Back again, hoping to finally score that illusive-Spa 24 win it’s been working so hard for recently, Bentley brings a pair of new Continental GT3s to the Spa 24 Hours, with its full factory crew. 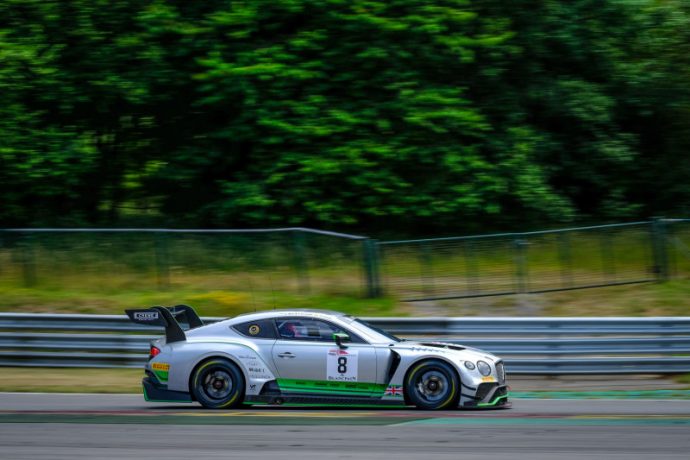 Stephen Kane, Jordan Pepper, Andy Soucek, Maxime Soulet, Vincent Abril and Jules Gounon make up the team, which will race at Spa for the first time with the Continental without newly-retired ace Guy Smith, and hope that the first overall win for the new car will come at Spa.

The new car so far hasn’t scored any big wins, but then again, it only has three races to its name so far! Bentley has tried so hard in recent years to win at Spa, and come achingly close on multiple occasions. Will this be the breakthrough year, or is it too soon to expect the 2018 Continental to be a capable of winning Spa on its first attempt?

23-time Spa 24 winner BMW, the most successful marque in the history of the race, will race with three cars in the Pro field this year, all of them M6 GT3s. 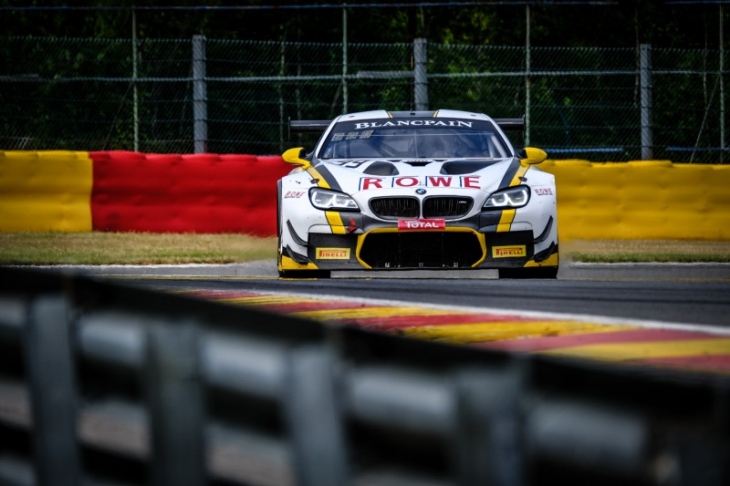 ROWE Racing will run a pair of M6s and with N24/VLN regular Walkenhorst Motorsport bringing the third car with a strong driver crew of Christian Krognes, and BMW factory men Tom Blomqvist and Philipp Eng.

ROWE Racing only recently confirmed its driver line-ups for the race, and it’s safe to say that Hans Peter Naundorf ‘s crew are serious about returning to the top step of the podium for a second time after their 2017 triumph.

Eight Ferraris will race at Spa this year, but only one of them will compete for overall honours in the Pro category. The Pro car will be run by long-standing Russian team SMP Racing, with a head-turning trio of current FIA WEC pilots Miguel Molina, Davide Rigon and Mikhail Aleshin behind the wheel. 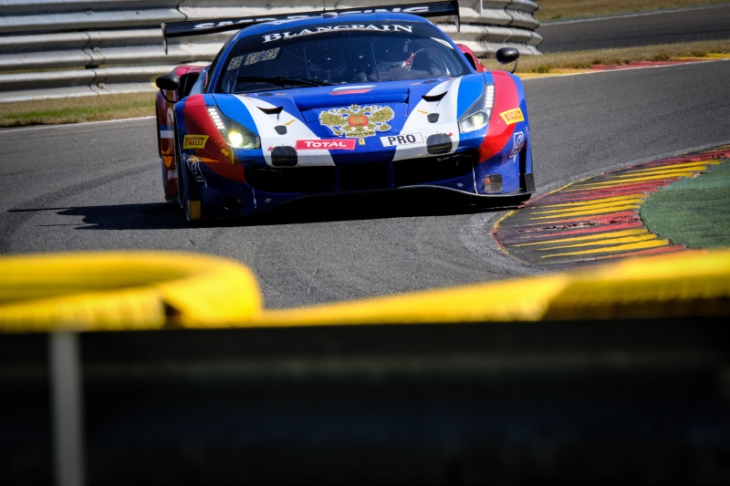 SMP Racing, which let’s not forget is running a parralel sportscar programme in the WEC’s LMP1 class, is more than capable of contending here, and in the past has turned heads. But in a race where strength in numbers is sometimes key if the weather takes a turn for the worse, you have to wonder what level of expectation there is here?

Having clinched the Endurance Cup and overall Blancpain GT Series titles in 2017, Lamborghini will now look to conquer the Total 24 Hours of Spa for the first time, building on the Huarcan’s big win at the Rolex 24 earlier this year (and then Sebring), which proved the car’s capability in long races. 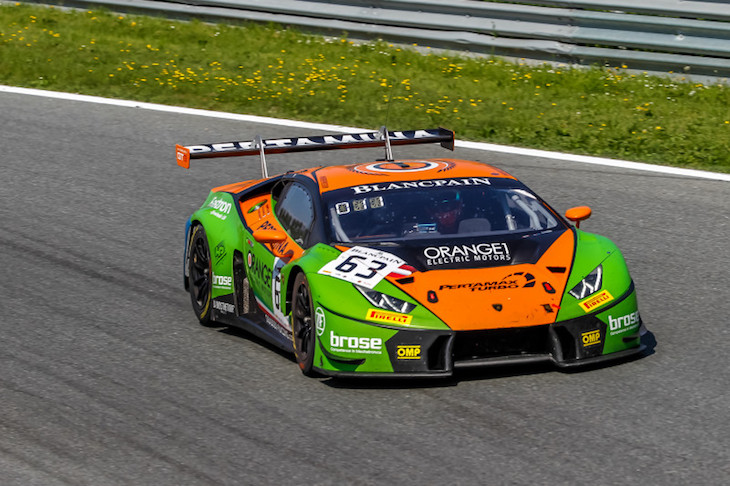 The Italian marque’s Pro class assault will be led by Grasser Racing Team, which will field its three full-season Huracan GT3s.

For Grasser, all three cars have strong crews.  Ezequiel Perez Companc, Raffaelle Giammaria and Marco Mapelli will compete in the #19, Mirko Bortolotti, Christian Engelhart, Andrea Caldarelli will drive the #63, Rolf Ineichen, Phil Keen and Franck Perera will share the #82.

Riding the wave of achievements so far this year, there’s every chance that this could be the year for Lamborghini at the Spa 24, its Huracan GT3 maturing into one of the most well-rounded GT3 cars of the current crop.

Fresh from a big win in the Paul Ricard 1000km in the last round of the Endurance Cup, Emil Frey will head to Spa full of confidence that its Lexus RCF GT3 can deliver the goods in its first year of Blancpain competition. 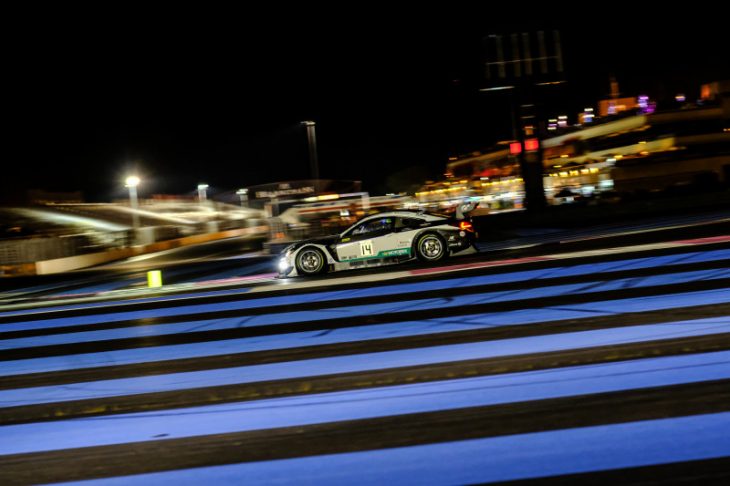 The team will race with a serious, experienced line-up for its pair of Pro-class cars, with Albert Costa, Marco Seefried and Christian Klien in one and Markus Paltalla, Norbert Siedler and Stephane Ortelli in the other. It will be interesting to see what the Swiss team can achieve here, when you consider that the car’s development cycle was lengthy, and the guys behind the scenes at Emil Frey played a big part in it.

For the Spa 24, it must be noted that the RCF GT3 has been handed a 15kg increase in minumim weight to.

After a tough run with Strakka Racing last year at Spa (and throughout the season), former Blancpain Endurance champion again Garage 59 takes the reigns as the McLaren team racing in the Pro class. 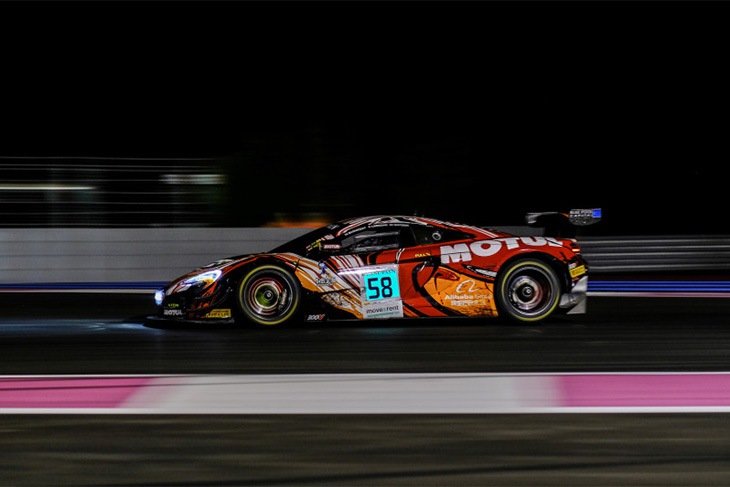 The #58 Garage 59 McLaren 650S GT3 led for much of the Circuit Paul Ricard 1000km before eventually securing a podium finish. With that result adding to their confidence, Come Ledogar, McLaren Automotive factory driver Ben Barnicoat and Andrew Watson will be targeting a big result at Spa.

Mercedes-AMG is the brand with the most cars racing at the Spa 24 Hours this year, with 13 AMG GT3s entered across three classes, six of them in the Pro class and gunning for the German marque’s first win since 2013. 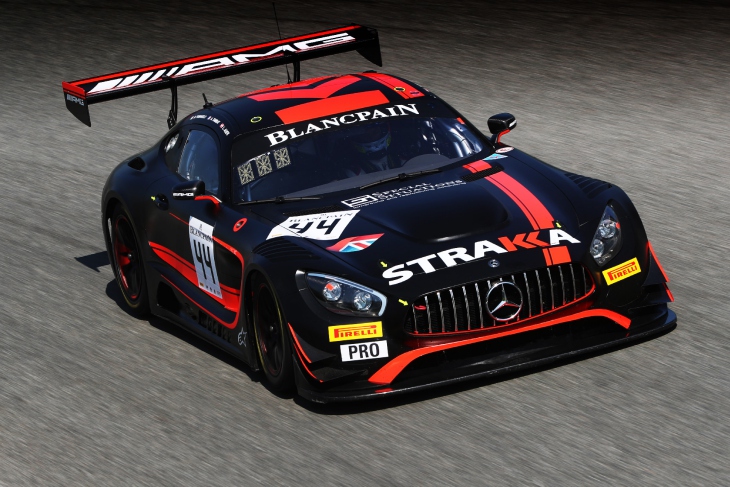 Former F1 driver Rubens Barrichello meanwhile, will make his Total 24 Hours of Spa debut, driving one of Strakka Racing’s four Mercedes, the British crew running an ambitious programme this year in Blancpain and the IGTC.

Strakka has now truly settled into racing GT3 cars, and after coming close to winning the Bathurst 12 Hour at the start of the year, will hope its form in big races continues at Spa, in what will be its second start in the race.

Having won the N24 already, the AMG GT3’s CV still lacks a Spa 24 Hours win, so you can bet that the Stuttgart-based marque will be more eager than ever to take a win this weekend.

GT Sport Motul Team RJN is another outfit fielding a new car in this year’s Spa 24. The team will race a single 2018-spec Nissan GT-R NISMO GT3 (which as DSC found out at Silverstone, is a fundamentally different car) in the Pro class with Lucas Ordonez, Alex Buncombe and Matt Parry handling driving duties. 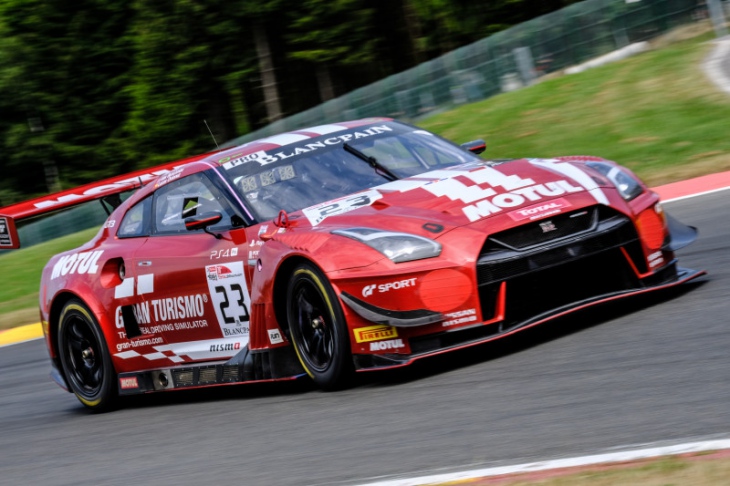 The car has yet to show its true potential, certainly in the results column, but with BoP often the deciding factor, could the Spa 24 Hours be the race in which the car claims a big result? Nissan has proven in the past as capable of pulling off a big win, even with fewer cars than its rival marques, especially with RJN at the helm, Bob Neville’s crew still setting the standard for running a team despite having less rescource to draw from than many in the paddock.

Porsche’s hopes of a seventh victory at Spa lie with a pair of impressive factory-backed Pro entries. The full-season Manthey Racing 911 GT3 R leads the line, coming off an impressive win at the Nurburgring 24 this year. Two-time Spa winner and new Pikes Peak record holder Romain Dumas will drive with Fred Makoweicki and Dirk Werner for Olaf Manthey’s team. 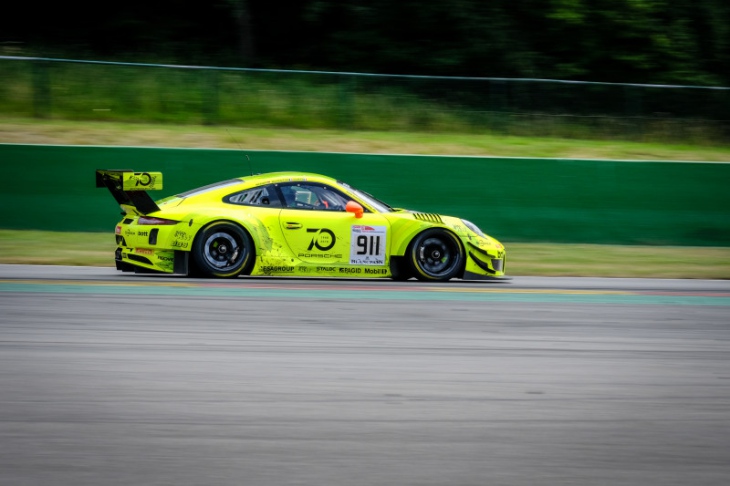 They will be joined by a KÜS Team75 Bernhard Porsche, the team back for a second crack at the race after finishing an impressive fourth in its Spa 24 debut last year. Driving the team’s car will be Timo Bernhard, Laurens Vanthoor and Earl Bamber.

Like Audi, an evo-spec version of its current car is on the horizon, but in Porsche’s case, there’s reason for condifence in the car’s current form, having won this year’s N24.