Steve Tandy (Lola-Mazda B12/60 P1) took a convincing win in the first Masters Endurance Legends race at the Nürburgring, winning over half a minute from the LMP2 ORECA-Nissan 03 shared by James Hanson and Alex Kapadia, and the LMP1 Lola-Aston Martin DBR1-2 raced by Belgians Christophe d’Ansembourg and Hervé Regout.

Unfortunately, the Lola Aston Martin had a gear selection problem at the start of its second stint”’ said Tandy. “so we were unable to continue our fight. I just managed the gap, it was a very straightforward second half of the race.

The first half of the race, Tandy and d’Ansembourg were at it hammer and tongs, never separated by more than half a second. The two P1 cars had dealt with James Hanson in the P2 ORECA on lap 2, and proceeded to leave Hanson, for the first time in the car this weekend, behind by 12 seconds at the stops.

After the stops, the race was effectively over. Regout lost time with his gearbox gremlins while Kapadia’s charge was blunted as soon as he was up into second place. Tandy kept the gap to Kapadia at 34 seconds lap after lap and only at the end eased off to win by 30 seconds.

“When I took the car out of the pits, I saw the gears going up on my dashboard”, said a distraught Regout. “It was changing up automatically! So I kept changing down because I thought it would stall. And this happened a couple of times, I lost so much time, it’s a shame. But to be honest, I only did a few laps in practice, I still needed to acclimatise. And this is not a good track for a P1 car, too twisty, too many slow corners. Spa will be better.”

Christophe d’Ansembourg gave the stunning Lola-Aston DBR1-2 its first win in the Masters Endurance Legends series by beating the Lola-Mazda B12/60 of Steve Tandy who the day before had won the first race of the Oldtimer Grand Prix meeting at the Nürburgring. 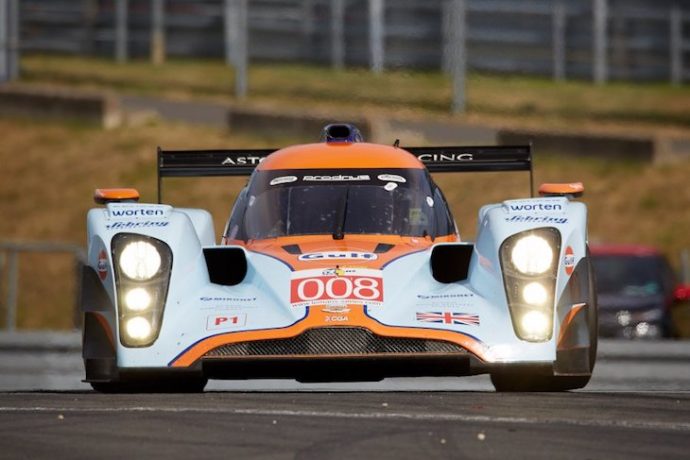 Tandy led the first part of the race but d’Ansembourg jumped his rival at the pitstops to defend a narrow three-second lead until the end.

Tandy took charge on lap 2 by passing the Alex Kapadia/James Hanson P2 ORECA-Nissan 03, with d’Ansembourg following through on the same lap. Tandy subsequently pulled out a three-second lead towards the stops, but found himself trailing the Belgian by four seconds when both had done their stops. The Lola-Mazda slowly nibbled away at the Lola-Aston’s lead but d’Ansembourg was still in front by 2.8 seconds when the red flag was shown. The race was not resumed.

We were at the same speed”’ said D’Ansembourg. “We got in earlier, got a good pitstop, and when I got out I was in the lead! I just managed my lead after that, the car went fine.

Kapadia and Hanson were a distant third after Kapadia was penalised for overtaking before the start of the race. Travis Engen’s Audi R8 moved up to fourth a handful of laps before the red flag by dealing with the quicker of the two ORECA-GM FLM09 machines, the Aaron Scott/Tommy Dreelan example leading Keith Frieser’s car.