After an hour of racing at Silverstone, predictably it’s a Toyota 1-2 up front, the two TS050 HYBRIDs have already lapped the privateers after what’s been a chaotic 60 minutes. 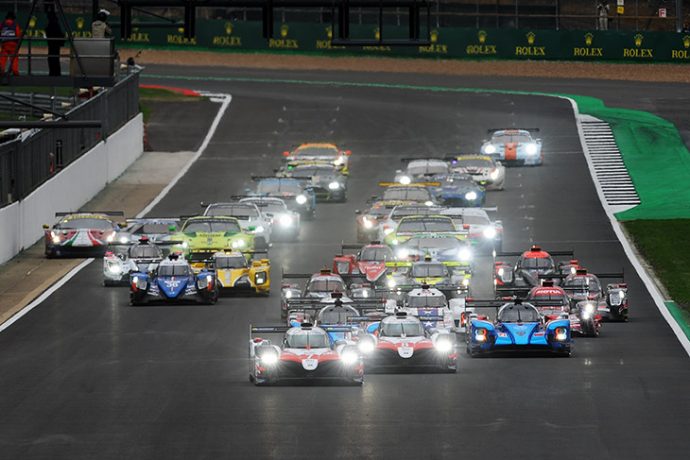 The #7 still leads after starting from Pole, Kamui Kobayashi aboard and able to keep the #8 of Sebastien Buemi at bay. Both cars have been running in formation, unchallenged by the privateer contingent.

Behind though, it’s been a very topsy-turvy start to the race. Turn 1 at the start was hairy, with the #17 SMP Racing BR1 and #3 Rebellion R-13 of Mathias Beche coming together, sending Beche into a spin and Sarrazin in the BR1 across the circuit to drivers right.

The Frenchman was later penalised for the collision, but has since risen back up to fifth in the running order, since serving the penalty.

Third in the top class, behind the two Toyotas sits the #1 Rebellion, which was also caught up in the Turn 1 confusion, Neel Jani having to run across the run-off on driver’s left to avoid the spinning sister car. The #3 sits fourth.

Further down the order in the class, the #11 SMP Racing BR1 has had to retire with an engine failure, Mikhail Aleshin parking the car on the grass out on the circuit. Jenson Button’s chances of a home podium, have therefore ended before he had a chance to turn a lap.

DragonSpeed’s #10 meanwhile, is sixth, but delayed after the team had to change the nose halfway through the hour.

LMP2 has been mainly static since the start. The #37 Jackie Chan DC Racing ORECA leads by 25 seconds, Jazeman Jaafar able to pull away from Giedo Van Der Garde, who was able to climb to second on the opening lap in the Racing Team Nederland Dallara.

Van Der Garde looked to hold onto second into the second hour, but Ho Pin Tung got by to make it a 1-2 for the JCDC team in the final minutes of the opening hour. The #38 Jackie Chan DC Racing ORECA has had a rollercoster start to the race, and remarkably sits second despite serving a drive-through for a jump start. T

he Signatech Alpine A470 is just outside the top three in fourth behind the RTN Dallara.

Like it’s LMP1 car, DragonSpeed’s LMP2 class ORECA has suffered a delay. Roberto Gonzalez struggled at the start into Turn 1, and had to reset the car mid-pack while cars were flying left, right and centre, causing the #67 Ford to hit its rear. As a result Gonzalez had to pit the car for a rear-end change.

The first hour in GTE-Pro didn’t disappoint, the category providing typically close racing from the off.

Pole sitter Olivier Pla pushed hard to recover the #66 Ford GT having taken to the run-off in avoidance of the scattering cars at the tail of the LMP2 field into Turn 1. This left Kevin Estre’s #92 Porsche in the lead, which he held before handing to Michael Christensen at the first scheduled stops.

Behind, the Ford GT’s had battled up through the field, having to work hard to pass the Aston Martin’s of Alex Lynn and Marco Sorensen, which were continuing their improved form. Andy Priaulx’s efforts got the best out of the Ford GT’s to sit second behind Christensen after the stops. Sam Bird in the #71 AF Corse Ferrari 488 GTE Evo had also pressed on aggressively into the top three.

In GTE-Am Salih Yoluc’s TF Sport Aston Martin made the better start than the two Porsches ahead of him as the field threaded through the Turn 1 compression. A three car shunt under braking put Paul Dalla Lama’s Aston Martin and the #54 Spirit of Race Ferrari into the pits to drop them down the order.

Yoluc’s lead wasn’t to last, the purposeful Project 1 Porsche back into a lead it held to the stops. Dempsey Proton Racing featured well, the #77 car comfortable in third after the driver changes.