It’s late summer in Japan, and that means it’s time for an endurance racing tradition that dates back to 1966. For over 50 years, the Suzuka 1000km was Japan’s great sports car race, whether it was part of the All-Japan Sports Prototype Championship, the FIA GT Championship, or most recently the Super GT Series, a race that spanned the evolution of sports car racing on the whole.

Now, the race is renewed and reinvigorated as the inaugural Suzuka 10 Hours, and is now the third leg of the SRO Intercontinental GT Challenge, the pinnacle of international GT3 racing, also open to the JAF-GT300 cars of Super GT’s ultra-competitive GT300 division.

With a ¥100 million JPY prize purse and 35 teams representing 13 different manufacturers and 8 different countries, Japan’s great race now welcomes a selection of the best sports car teams and drivers from across the world. This reinvention of the Suzuka Summer Endurance Race is over a year in the making, and as race weekend draws closer, the excitement has continued to build gradually.

The first part of DSC’s Suzuka 10 Hours preview examines the thirteen cars from the Pro-Am Cup and Am Cup sub-categories, comprised of a mixture of independent teams and hobbyist drivers, with a few bona fide top stars of GT racing interspersed amongst them.

While their main focus is just to be the best of their group, recent IGTC history, in particular, at the Bathurst 12 Hours, has shown that even as GT3 racing has escalated into an all-pro, factory funded manufacturer battleground, the Pro-Am squads whom the class was originally aimed at can stand on the overall podium, if not win the race outright.

There are more Mercedes-AMG GT3s than any other car in the field – seven in total. This includes the only Am Cup car entered into the Suzuka 10 Hours, entered by Osaka-based Sato, Yamashita-SS/Rn-sports (pronounced: “Roun-ye” Sports) from the ST-X class of the Pirelli Super Taikyu Series.

Just to finish the race would be a major accomplishment for the only all-Bronze trio on the grid: Atsushi Sato, Ryosei Yamashita, and Norio Kubo.

Of the trio, only Yamashita has raced in Super GT, but he is very much a true young amateur driver, climbing up to GT3 racing via the Toyota 86/BRZ Race series. Sato’s background is in Super Taikyu, and Kubo has raced in the lower formula categories of Japan into his late 50s. 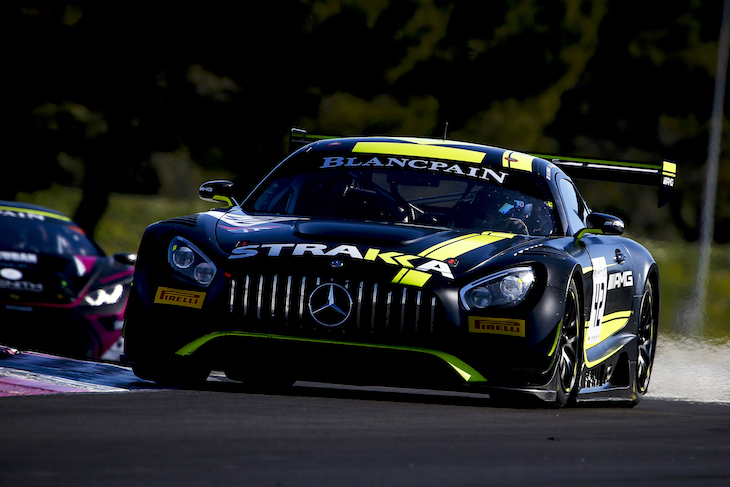 Nick Leventis, the heart and soul of Strakka, will be one of three drivers competing for IGTC Bronze Drivers’ Championship honours in this race.

With him in the #42 Strakka Mercedes that finished 2nd in the Pro-Am Cup at this year’s Spa 24 Hours, Leventis has two gifted “super silver” drivers. 23-year-old Felipe Fraga hopes to emulate Daniel Serra’s transition from Brazilian Stock Car Champion to top-tier GT racer. 26-year-old Italian David Fumanelli has been a lightning quick driver for Strakka all year long in Blancpain GT. Both are expected to have big performances at Suzuka.

SunEnergy1 Racing were third in class at Spa, and a solid 2nd overall this February in the Bathurst 12 Hour. Australian Kenny Habul will also be competing for the Bronze Drivers’ Championship, and he’ll have another all-new supporting cast of young Silvers at Suzuka. 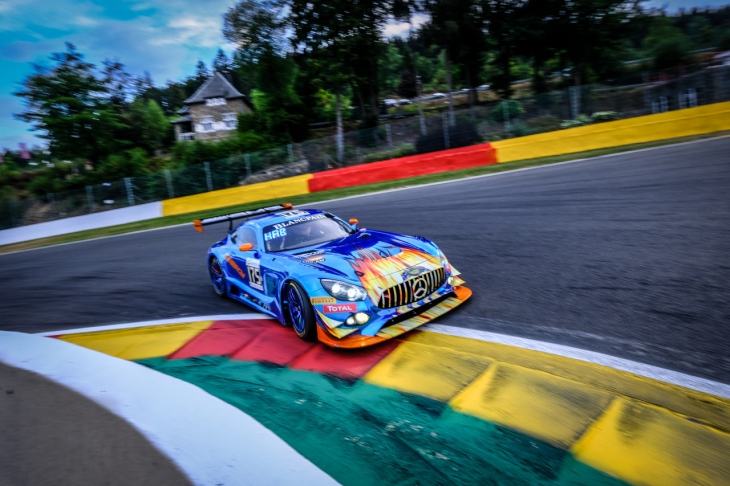 French-Canadian Mikaël Grenier comes over from the Emil Frey Jaguar Racing team in Blancpain, and German Luca Stolz, who is having a tremendous year, 3rd overall at Bathurst, 3rd in GTE-AM at Le Mans, 5th overall in Spa. This will be Stolz’ third different team in as many IGTC rounds, and he’s another “super silver” on the rise in GT racing.

Two of Porsche’s five total 911 GT3-Rs are in the Pro-Am Cup, one from the USA, and one from Japan.

Black Swan Racing, are the only Pro-Am Cup team selected to score manufacturer points in this IGTC round. That is a testament to the faith Porsche have in this American team, which finished 3rd overall in the Bathurst 12 Hour this February. 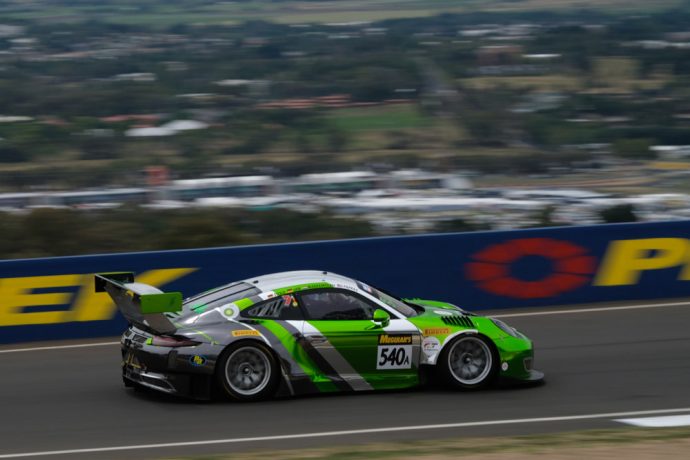 Tim Pappas of Boston is one of America’s finest gentleman drivers in GT racing, and Michigan’s Marc Miller has carved his way to the peak of GT racing through the grassroots of American circuit racing. Pappas is the third driver to be nominated for the Bronze Drivers’ Championship.

Completing this dynamic driver lineup for the #54 Porsche is Dutch veteran Jeroen Bleekemolen. His skills need little exposition these days – former LMP2 winner at Le Mans, overall winner of the Nürburgring 24 Hours in 2013, and now the premier talent in IMSA’s GT Daytona class.

From Japan is the #77 D’station Racing Porsche, the team’s Pro-Am entry from Super Taikyu. They’re led by Satoshi Hoshino, CEO of D’station Amusements’ parent company, and himself a decent amateur driver with a background in Porsche Carrera Cup Japan. 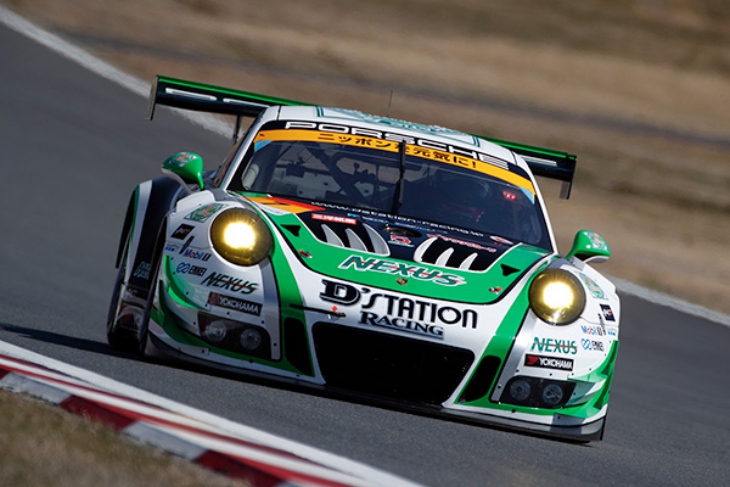 Hoshino has two solid Silver drivers of his own to race with, starting with Tsubasa Kondo, his regular teammate in Super Taikyu. 28-year-old Kondo just wrapped up his 2nd PCCJ title earlier this month, and he had a stellar performance this January in the Dubai 24H.

New Zealand’s Jono Lester is the third driver, who had a brilliant season in GT300 last year and has been quick in everything from Australian GT, to Super Taikyu, even to the Thailand Super Series this year.

Of the three Ferrari 488 GT3s in this year’s Suzuka 10 Hours, two are in the Pro-Am Cup, including a local favourite based just 18 kilometers south of Suzuka in the city of Yokkaichi. 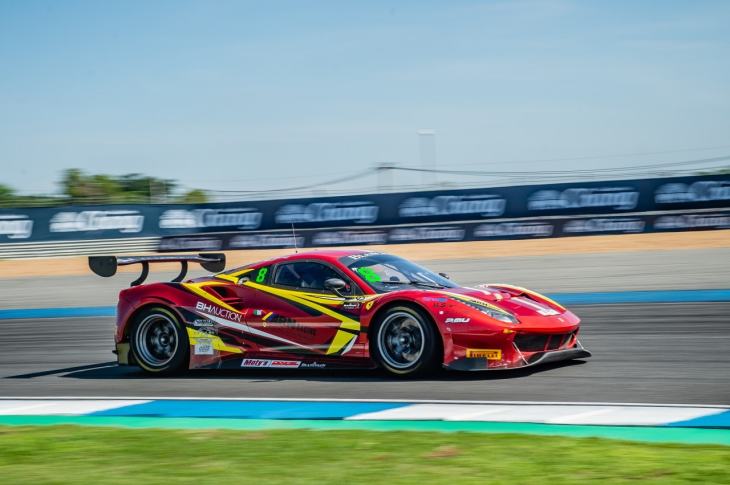 Nagai, who drives the #30 Toyota Prius GT in Super GT, is joined by the two drivers of the sister Prius #31, led by two-time GT500 Drivers’ Champion Kohei Hirate, who is in his tenth Suzuka summer enduro, but has never finished better than 7th in 2009. Hirate is one of three Platinum drivers in this sub-class.

Koki Saga, known lately for his comedic approach to pre-race driver introductions, was a last-minute addition to comply with the Pro-Am driver regulations. Saga won the GT300 class in the 2006 Suzuka 1000km.

Taiwanese HubAuto Corsa has a multi-national Pro-Am lineup for their #28 Ferrari. Aussie Nick Foster, their lead driver from Blancpain GT Asia, is joined by this year’s Pro-Am Cup winner at Spa, David Perel of South Africa. 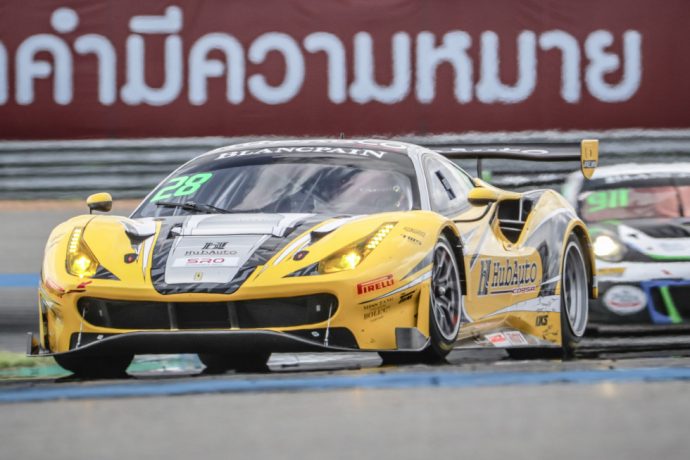 With them is Japanese driver Hiroki Yoshida, who was part of the team that won the GT300 class in the 2012 Suzuka 1000km, making his sixth Suzuka Summer Endurance Race start.

Of Audi’s five-car R8 assault at Suzuka, one of them, the lucky number 13 from Chinese customer team Absolute Racing, is in the Pro-Am Cup. 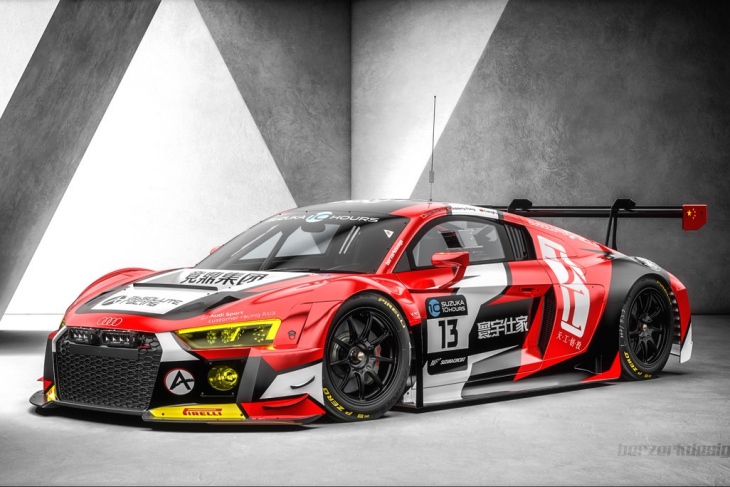 Amateur driver Sun Jingzu has developed his skills in the Audi R8 LMS Cup in the Asia-Pacific. He has a fellow Chinese driver with him in national trailblazer, Congfu “Franky” Cheng, the first from his country to compete in and finish the 24 Hour races at Le Mans and the Nürburgring, and the man who won at Suzuka this June in the Blancpain GT Asia series for Absolute Racing.

Canadian-born Adderly Fong (of Hong Kong) completes the team’s driver lineup, the former single-seater racer having won for Absolute Racing both in Asia and America since making the switch to sports cars.

Surprisingly, BMW, who won the Spa 24 Hours last month, only have one car to represent them at the Suzuka 10 Hours, and it’s in the Pro-Am Cup. This does happen to be a fine squad to represent them though: Singha-Team AAI, the reigning champions of the Asian Le Mans Series’ GT Class. 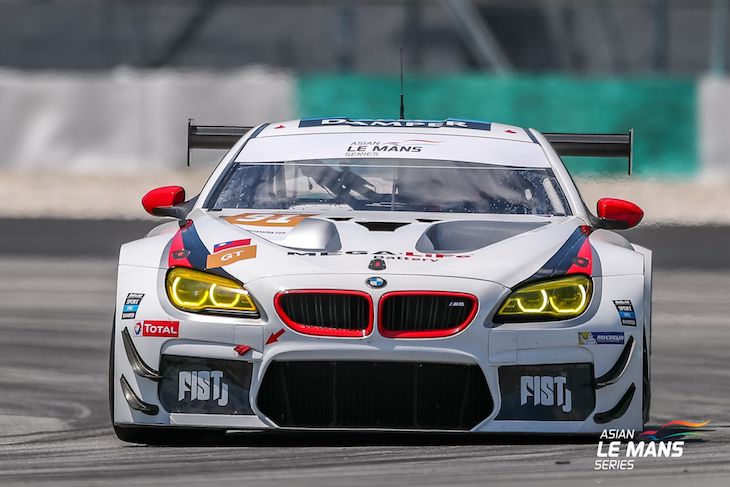 One of the drivers of that Spa 24 Hours victory headlines this AAI effort: Second-generation factory racing star Tom Blomqvist, who’s also raced for BMW in everything from DTM, to Formula E, to IMSA and WEC with the new M8 GTE all within the last 12 months.

And bringing the Singha to Singha-Team AAI, is the Thai brewery’s heir apparent, Piti Bhirombhakdi, a solid Bronze driver from the Blancpain GT Sprint Cup. 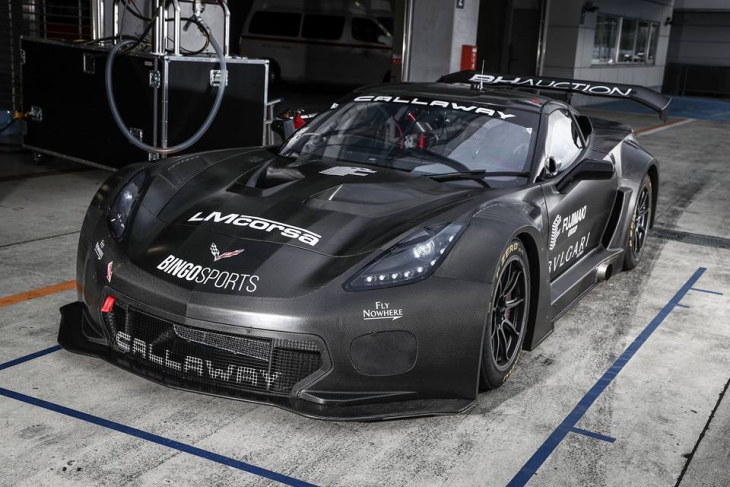 The Callaway/Bingo team is looking like it’ll be a very popular Pro-Am squad at the Suzuka 10 Hours, many Corvette Racing fans around the world may be inclined to pull for them.

Team JLOC’s #87 Lamborghini Huracán GT3 will be the sole Lambo in the Pro-Am Cup. This is the same car that finished third in the GT300 class at last year’s Suzuka 1000km. But when you see it on track, it will have a much different livery than the one they use in Super GT, it’ll be clad in the red, orange, and black of EVA Unit-02 from the Evangelion anime series! 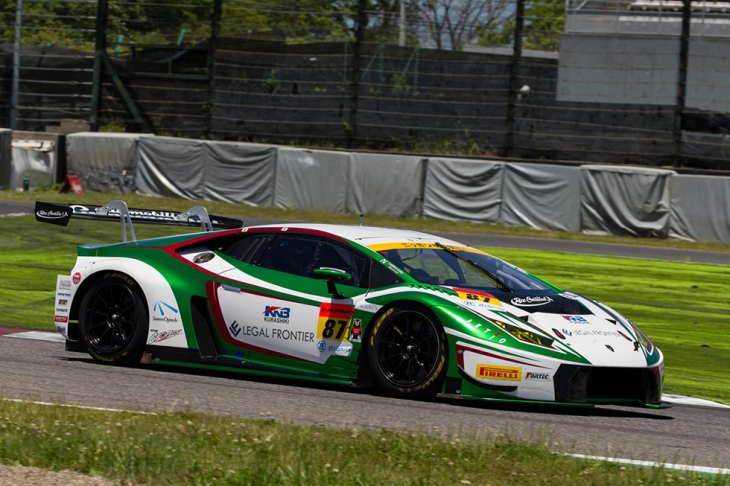 The last driver on the team is currently up in the air, though. The official Suzuka 10 Hours entry list has it as Kimiya Sato, who races full-time in JLOC’s #87 car in Super GT. EVA Racing, the team’s title sponsor for the Suzuka 10 Hours, announced in a press release on 8 August that Sato would be replaced by Silver-rated Tsubasa Takahashi, who is the third driver for this same team’s GT300 efforts at Fuji this year.

All the same, “JLOC Unit-02” is going to be a strong sleeper pick for Pro-Am Cup honours.

The Honda NSX GT3 makes its Suzuka Summer Endurance Race debut this year, and CarGuy Racing, the first Japanese customer team for this car, will represent Honda in the Pro-Am Cup. 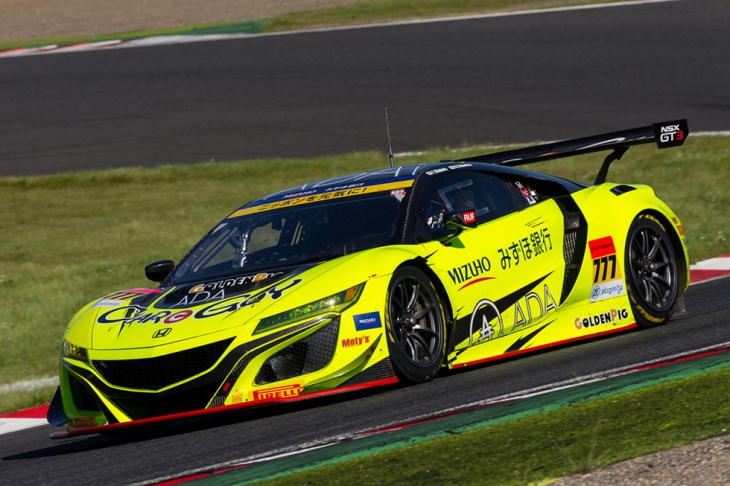 Takeshi Kimura is the heart and soul of this CarGuy team, a car collector, turned automotive entertainer, and now a racing driver with serious ambitions of racing at Le Mans in the near future.

2012 GT300 champion Naoki Yokomizo is an experienced Silver driver who is in his 11th Suzuka Summer Endurance Race, he finished 5th overall in the 2008 race. Japanese-Italian Kei Francesco Cozzolino, who brings with him his recent Lamborghini Super Trofeo successes, is the third driver and second Silver on the crew.

CarGuy’s fluorescent yellow livery will pop in the evening hours of the race, where they hope to win the Pro-Am Cup.

Fittingly, this Pro-Am/Am Cup preview wraps with the only non-GT3 car in the segment: The Lotus Evora MC (Mother Chassis), designed by visionary Takuya Yura and his Mooncraft Engineering garage, and fielded by Cars Tokai Dream28, who won the GT300 class in the Suzuka 1000km in 2005 and 2007. 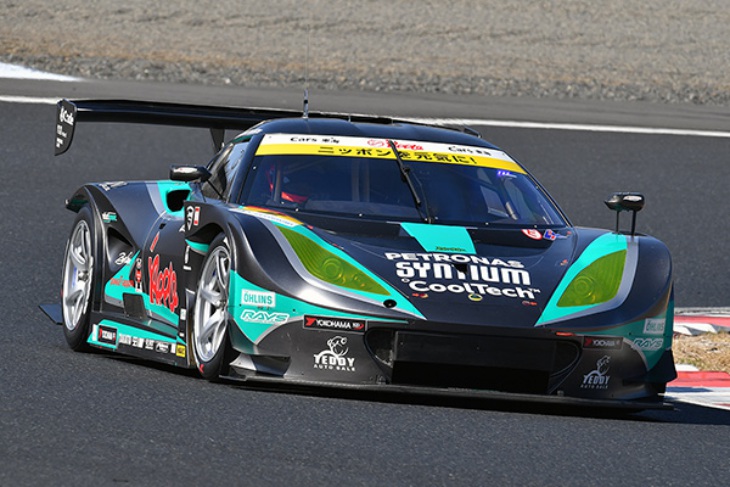 This is also the car with the most cumulative Suzuka Summer Endurance Race experience in the entire field, a total of 45 starts including this year. 22 of them come from the team’s gentleman driver, and the oldest driver in the field at 65, Kazuho Takahashi.

In his 17th start, Hiroki Katoh is the quick man of this team and has been for over a decade, and Hiroshi Hamaguchi, the other Bronze driver, is in his 6th Suzuka race.

In previous GT300 efforts, the #2 Lotus Evora MC has proven very quick around Suzuka with the likes of Katoh and future F2 star Tadasuke Makino wheeling it, with its supreme downforce more than making up for its relative lack of horsepower. But reliability has never been a certainty, and without the driver aids that the GT3 cars have, it’s a more difficult car to drive at the limit consistently – especially for Takahashi and Hamaguchi.

That makes this mid-engined, V8-powered Mother Chassis Lotus the ultimate wildcard out of this Pro-Am/Am Cup segment of the field.

Stay tuned to DSC for Part 2 of our Suzuka 10 Hours preview, examining the 22-strong All-Pro entry into Japan’s great race!