Duncan Williams and Bradley Smith survived pressure from Nielsen Racing / Ecurie Ecosse’s Tony Wells and Colin Noble to seal victory for Mectech Racing in the LMP3 Cup Championship at Donington Park. Smith took over the pole-sitting car midway through the one-hour race and fended off the attentions of Noble’s Ligier after Williams had fought hard to maintain the early advantage. 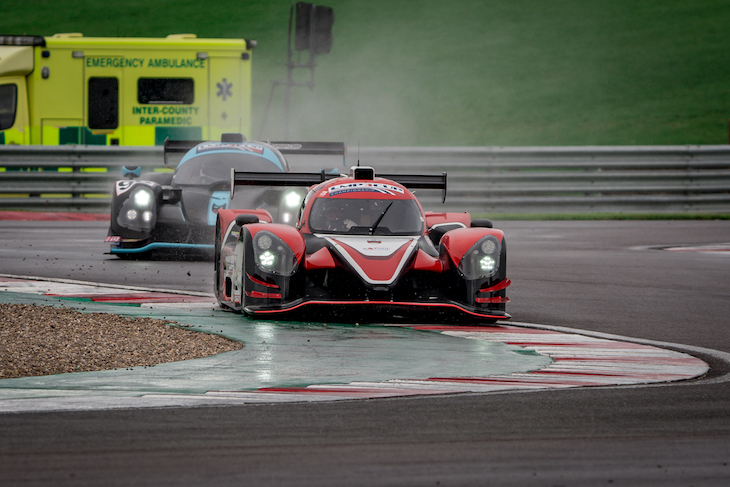 The pole man came under threat during a wet first stint from the fast-starting Speedworks Motorsport Ligier of Dominic Paul, who eventually made his move stick coming through the Melbourne Loop just as pit stops got underway. Smith took over the Mectech Norma from Williams and inherited the lead, successfully shaking off additional pressure of his own from Noble as the track began to dry.

“The car was at its best in the wet and easy to drive, very consistent,” said Williams. “It became a bit more of a handful after that. I was driving to my pace and was coming in, so I gave Dominic the space.”

“We were going well and on the drying track we had a bit of a problem with the rear tyres overheating,” said Smith. “Colin had great pace, so I just had to defend for anything I had and managed to hold on. This has actually been my first proper driver in the wet around here, so it was all a bit of a learning curve. The team have done a fantastic job and we’re ready to go again tomorrow.”

Noble came within a second of the winning Norma M30 after a late charge, having taken over from Tony Wells who kept the leaders within sight during a tight opening stint. A late red flag interruption brought an end to his chase just as he’d made the move for the lead, but the Nielsen pair held onto their championship advantage with second place.

“I didn’t want it to rain as the car was pretty good in the dry,” said Wells. “I don’t think that I had the advantage I could have had in the dry. At the start, I reacted better than Duncan, but it meant I had to back out and it gave me a bit of a delayed start, then on the third lap I ran wide onto the rubber and kerb and lost second. After that I kept a close gap and got the quickest lap of the three of us.”

“I was just in the process of taking the lead,” said Noble. “I knew I was going to get a chance towards the end of the race, so it was about not being too rash and taking a sensible approach. We’re leading the championship and clearly had the pace to win there, so a pretty good situation.”

Neil Primrose was best of the invitational and PT4 entrants in his Norma M20 FC, finishing on the podium in an impressive third place overall.

“It was a case of steady away”, said Primrose. “I’ve been here before and the car felt great, so it was a case of the more you push, the better it feels. That kind of lulls you in though, and I didn’t want to chuck it off before tomorrow and made sure I kept it in one piece. It’s such a great car in the dry and makes you push, so it’s been a great weekend so far. These cars are amazing when you look at the lap time, so it would be great to add more to the grid.”

Tony Wells and Colin Noble went one better than their performance in Saturday’s LMP3 Cup Championship race at Donington Park with victory in today’s race. Wells battled gearbox gremlins and a fighting Dominic Paul before handing over to Colin Noble who brought the car home for maximum points. 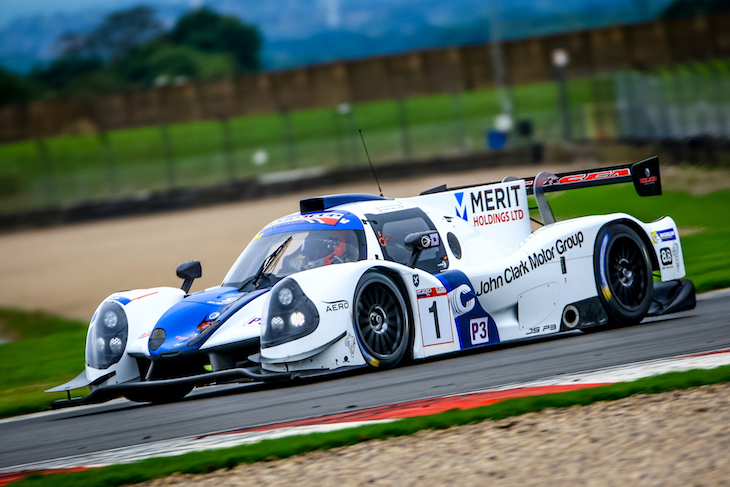 Paul had charged from third place to lead in the Speedworks Motorsport Ligier, but a spin put him back behind Wells just before the mandatory pit stops took place. The lead pair came into the pits, but Paul locked up on pit entry and slid into the barrier, being forced to retire from the race.

“It was obviously nice to get pole this morning and it made life a lot easier,” said Wells. “I made a good start, maintained the lead and pulled a good gap. We had a gearbox issue which was a blip on the down change, so when you brake it feels like being hit from behind. It pushed me on, and then when Dominic almost came into the pits early I got back through. I didn’t even notice him disappear, but I gave Colin the lead which was job done for me.”

“We did a reset of the car at the pit stop which helped it a little bit,” said Noble. “But in third-gear corners the issue was pushing into them which made it a matter of getting it home for me. It’s important to get those points and we’ll see how we go at Silverstone.

Neil Primrose found himself second overall after the stops, enjoying another strong drive. He managed to hold off a recovering Bradley Smith for a number of laps, before giving up the place into Redgate. Smith, who took over in the Mectech Motorsport Norma M30 from Duncan Williams, set quick laps but had too much ground to cover to catch Noble.

“It was a totally different race to yesterday,” said Williams. “The car in the first couple of laps felt really good, but then unfortunately it started to go off and became a bit of a handful, so I had to make sure I got it back to the pits for Bradley to take over. Nielsen knows its car inside out while we’re still learning, so for Bradley to get fastest lap in that race was some doing.”

“On the first out lap, I got on it and into a rhythm pretty quickly, but we suddenly had a power steering issue,” said Smith. “By the end I was just settling in and trying to put in some consistent laps. The team have done a fantastic job all weekend, so on to the next one at Silverstone and we’ll see how we get on there.”

Primrose collected his second podium of the weekend at Donington with third place in his Norma M20 FC, best of the invitational entries once again. “You know you’re in a race to keep Bradley behind you,” said Primrose. “But it was good fun there keeping the gap there for a few laps. I was pushing hard to get it into the 1m27s, but the car started to drop off a bit and I began to squeeze off and let him go through, have a breather and then get back on it. The car is sort of evolving with the fuel burn getting better, but the balance never gives you anything bad. It just keeps getting better and it’s been a good weekend. It’s nice to get a bit of seat time while I’m doing it all myself; it’s been a great weekend.”