Mirko Bortolotti, at the wheel of the #63 GRT Grasser Racing Team Lamborghini Huracán GT3 he shares with Christian Engelhart, took pole for the first of two races of the final weekend of the 2018 Blancpain GT Series Sprint Cup at the Nürburgring. Bortolotti, currently lying in joint third place in the drivers standings, put in a 1:54.246 on his sixth lap of seven. 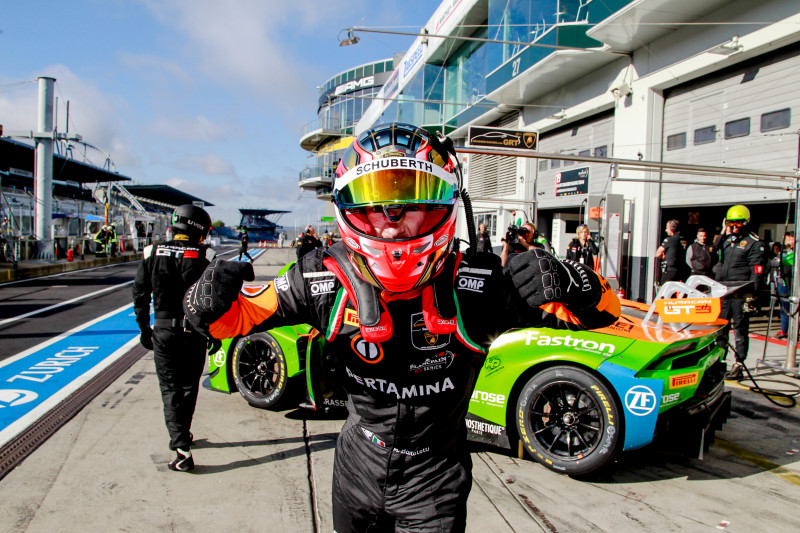 Albert Costa, driving the #14 Emil Frey Lexus Racing Lexus RC F Gt3 will line up alongside the Italian driver on the front row of the grid, after putting in a 1:54.512 on his final lap in a twenty-minute session that ran largely incident-free.

Driver of the #1 Belgian Audi Club Team WRT Audi R8 LMS Alex Riberas, who shares the leads in the Sprint Cup drivers standings with Raffaele Marciello, Michael Meadows and teammate Christopher Mies, could only mange third quickest in the first session with a 1:54.576.

Quickest of the Silver category was the #90 AKKA ASP Team Mercedes-AMG GT3 in which Nico Bastian set a 1:54.812 whilst Piti Bhirombhakdi in the #39 TP 12, Kessel Racing Ferrari F488 GT3 was quickest in the Pro-Am class.

Mirko Bortolotti was delighted with his qualifying session:

“It’s great to be back on pole after the pole in Zolder,” said Bortolotti. “It’s a perfect starting spot and we have got another point. We are still in the title fight even though the chances are low for us but that was the goal today, to be on pole in Q1 and I’m really happy that I made it stick and I had a great lap.”

Emil Frey Lexus Racing’s Albert Costa was surprised at the pace he got from the team’s #14 Lexus RC F GT3.

“Actually I don’t believe it” said Costa. “We were really struggling yesterday. We were nowhere but suddenly the car today was really good. I was surprised with that. I was feeling confident. We made a good step forward between the first set of tyres and the second and I was feeling even stronger. All the crew did a fantastic job. The team worked until late in the night and I am so proud of them and so thankful.”

Black Falcon took a surprise pole position for Sunday’s one-hour sprint race when Luca Stolz, at the wheel of the #6 Mercedes-AMG GT3 he shares with Hubert Haupt, put in a 1:54.007 on his penultimate lap, .006 seconds quicker than Raffaele Marciello in the #88 AKKA ASP Team Mercedes. 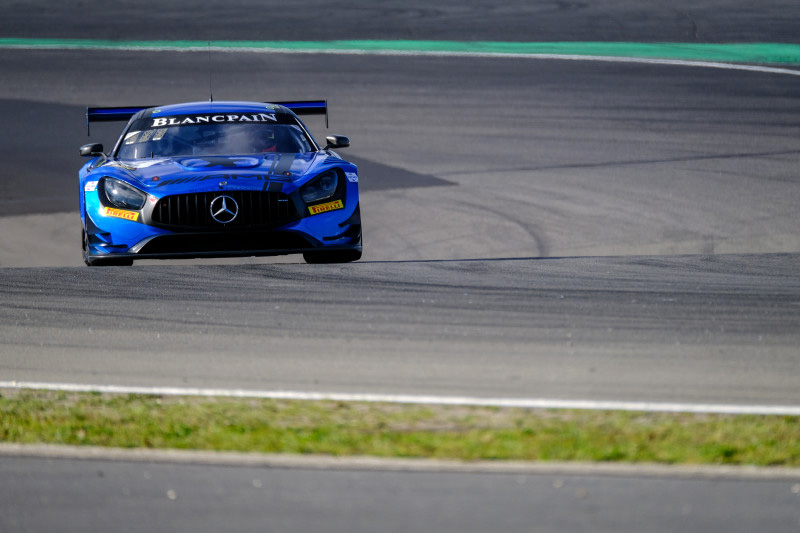 Completing the top three for on the grid for Race Two was the #2 Belgian Audi Club Team WRT Audi, piloted by Dries Vanthoor who put in a 1:54.195.

The second session was red-flagged after just over five minutes of running after Christopher Mies, driving the #1 Belgian Audi Club Team WRT Audi, suffered what appeared to be a brake failure and went off at Turn 8, making heavy contact with the barrier. Mies was thankfully unhurt but the car suffered significant damage, presenting the team with a challenge to get the #1 car on the grid for Race One.

The lights go out for the penultimate race of the 2018 Blancpain GT Series Sprint Cup at 14:05 local time.