Christophe d’Ansembourg led from start to finish in his Lola-Aston Martin DBR1-2 to win the first Masters Endurance Legends race of the weekend but he was run close all the way to the line by Steve Tandy’s Lola-Mazda B12/60.

The two P1 Lolas headed both Peugeot 908 HDi FAPs in the field, Kriton Lendoudis staying within 25 seconds of Tandy, with David Porter a lap down. Travis Engen’s Audi R8 was fifth.

With a string of fastest laps of the race, D’Ansembourg quickly opened up a four-second gap to Tandy only to see it drop to two just before the pit window opened. Tandy pitted on an earlier occasion than the Belgian, and while he lost a couple of seconds during his stop, D’Ansembourg put in another two fastest laps of the race to increase the gap to Tandy to eight seconds.

In fact, the Lola-Aston Martin was now leading Lendoudis, Tandy’s slow stop having dropped him just behind the Peugeot that during the Greek’s first stint had remained within a couple of seconds of the Lola-Mazda. Tandy, however, quickly dealt with the Peugeot and began to close the gap to D’Ansembourg, setting fastest lap on lap 14 to get within 2.5 seconds, but then the Belgian inched away again to take an accomplished win.

“The car was really good,” said D’Ansembourg. “I created the distance in the beginning but Steve was fast! I was getting a vibration at the end, but I still managed to stay ahead.

“I stupidly stalled in the pits”, said Tandy about losing time at his mandatory stop. “I lost two or three seconds there. But it was always going to be difficult to beat Christophe at Spa. His is very much a Spa car. We’ll see what we can do in the second race, but we will be much better in Dijon.

In P2, Mike Newton’s MG-Lola EX257 was never headed as he led Keith Frieser’s ORECA-GM FLM09 and Marc Higson in the ORECA-Nissan 03. Newton ran fourth overall initially before slipping behind Engen but always maintained some distance between himself and his two main rivals who never far apart, Higson hounding Frieser to the end.

Steve Zacchia completely dominated GT1, his Ferrari 550 Maranello finishing sixth overall and well ahead of Nikolaus Ditting in the Aston Martin DBR9. Zacchia got past Newton ahead of the stops, leaving the P2 lead battle behind while Ditting followed the three leading P2 home.

The GT2 class saw Manfredo Rossi leading almost all the way in his Porsche 911 GT3 RSR but two laps from the end saw Xavier Tancogne come past in the Ferrari 458 GTE. Initially Maurizio Fratti in the Porsche 996 RSR ran second but he was soon overtaken by Olivier Tancogne in the Dodge Viper GTS-R. After the pitstops, Xavier Tancogne was up into second and began closing the gap to Rossi who on lap 16 had to make way for the Ferrari. 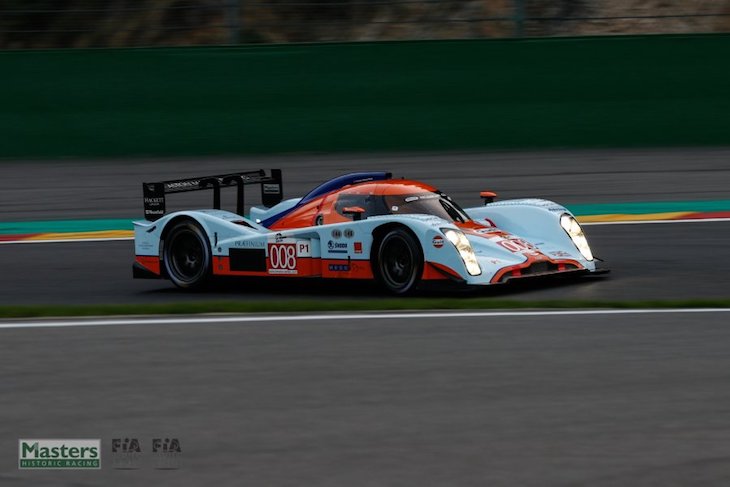 From the start, the Belgian quickly created a gap of some four seconds over Tandy, which went up and down as traffic came along. After the stops, Tandy dropped away to lag 8 seconds behind on lap 12 before starting on a final offensive that left him one second short of a win. D’Ansembourg was merely managing his advantage, though, and crossed the line in first.

Were much faster than yesterday!” said D’Ansembourg, “I did a 2.10! But Steve was quicker too, so it was a fight until the end. We both didn’t make any mistakes, so it was traffic that made the difference.

I tried again and again, but just didn’t have the straight-line speed of the Aston,” said Tandy. “I was quicker in sector 2 but then he just ran away in 1 and 3. But we go to Dijon next, and that’s hopefully more suited to the Lola-Mazda.”

In Travis Engen’s wake, the American finishing fourth in his Audi R8, Keith Frieser (ORECA-GM FLM09) prevailed among the P2 cars, the Canadian taking the lead on lap 3 and never looking back. Yesterday’s winner Mike Newton (Lola-MG EX257) dropped five places on lap 3 but came back to second when Mark Higson was first hit with a pair of time penalties for exceeding track limits and then dropped out on lap 13. This elevated Mike Furness in the Courage LC75 to third in class.

After his dominant class victory in Friday’s race, Steve Zacchia (Ferrari 550 Maranello) led the GT1 class from the start but this time failed to get away from Nikolaus Ditting’s Aston Martin DBR9. In fact, after the stops Zacchia was looking at the rear end of the Aston Martin, which didn’t budge until the finish line. However, when Ditting was handed a 23-second time penalty for speeding in the pitlane, Zacchia took a second GT1 class win.

It was very difficult with the car after the team decided to leave on the same tyres”, said Zacchia. “I was struggling with understeer here and oversteer there, so I just tried to manage the car as it was. After the stops I pushed to overtake Nikolaus but just couldn’t do it.”.

“Good fun, great track, best way to spend a Saturday afternoon”, said a sporting Nikolaus Ditting. “A shame about the penalty but I just couldn’t get the pit limiter in. I had such a great fight with Steve, though, and that’s what it’s all about.”

In GT2, Xavier Tancogne’s Ferrari 458 GTE dominated from the start. Manfredo Rossi’s Porsche 911 GT3 RSR ran second until in the closing stages Shaun Lynn (Aston Martin Vantage GT2) nipped past for second in class. Maurizio Fratti’s Porsche 996 RSR, which retired on lap 6, was third in the opening stages before Lynn surged past on lap 3.