Ecurie Ecosse / Nielsen Racing scored a breakthrough first Le Mans Cup win in 2018 in fine style and a 1-2 finish at Spa in heavy rain, after two hours of frantic racing.

Winning the race was the #79 Ligier JS P3 of Alasdair McCaig and Colin Noble, which was in the running throughout, in changable conditions, and took possession of the race lead in the final 10 minutes while Noble was chasing down the #24 Cool Racing Ligier.

Alexandre Coigny held the lead and was being reeled in and went off at Pouhon into the barriers and out of the race with just under 10 minutes remaining. The late heartbreak promoted the #79 to the lead and the sister Ecurie Ecosse Ligier of James Litteljohn and Tony Wells to second.

“It was rather tricky, Alasdair had a tough start, but we came through. It feels awesome,” said Noble.

“It’s been a long time coming, but we kept it out of trouble, enjoyed it in the wet and brought it home!” added McCaig.

Third meanwhile, was Leonard Hoogenboom and Jens Petersen’s DKR Norma, which recovered after a spin at the start of the race to finish on the podium and crucially, win the LMP3 Teams’ and Drivers’ titles. The result marks DKR’s second straight Teams’ title.

The Cool racing car had held the lead after the stops as one of a pair of LMP3s that had opted to start with their Pro drivers on what proved to be a greasy Spa circuit that was soon undriveable without wets.

Several cars suffered mishaps on the opening lap including both front row starters, the polesetting #25 Lanan Racing Norma in the hands of Mike Benham and Tony Wells in the #2 Ecurie Ecosse/ Nielsen car both running straight on at T1 with others spinning away momentum too as the conditions caught out the mainly Am starters on, mainly slick rubber.

Benham recovered but then had another major moment at Raidillon, the Lanan Norma having a major wiggle and Benham doing well to only make light contact with the tyre barrier on the outside of the turn. With penalties to add later it would be a fight back for both Benham and Duncan Tappy but they’d recover to 13th.

The DKR Norma, with Jens Petersen starting, needed to finish seventh or better to completely guarantee the Championship win and a spin out of Jackie IcKx Corner on lap one wouldn’t help the nerves! Petersen was an early stopper for wets as the rain came more steadily – It would prove to be a wise decision. Aside from a later half spin to the outside of Pouhon that cost him around 8-10 seconds it was a solid run thereafter for Petersen, picking of places s others struggled in the conditions and handing over the #3 Norma to Leonard Hoegenboom in a strong position which put the Championship out of any doubt this side of either mechanical problems of on track contact. Neither came and the pair deservedly wrapped up the title a race early.

United Autosports had opted to start all three of their Ligiers on wets and of the trio Richard Meins made the best of the opportunity, emerging from the inevitable mid-first stint tyre-changing flurry in real contention, handing over the car to Christian England in third.

England had a fine late-race battle with Dino Lunardi, chasing hard in the Motorsport 98 Ligier, England held off the #98, nose to tail in the spray, for almost two laps, the pair dicing and trialling inside and outside lines searching for the best grip and traction before eventually having to cede the position, the pair would finish fourth and fifth.

Behind two of the three Graff Normas came through the storm as strong finishers, both finishing ahead of the charging Job van Uitert, the young Dutchman again mounting a recovery drive in the #14 RLR MSport Ligier after struggles in the first half from John Farano, another man delayed by being caught out by early race conditions, the sister car meanwhile had the opposite sort of race, the team opting to start with Alex Kapadia from the back of the grid, Ross Warburton having had little or no time in these conditions in the car.

Kapadia mounted one of his trademark drives to the front, led as leader Antonin Borga finally pitted and handed over the #59 to Warburton who did his best to find rhythm in ever worsening conditions. 12th was a good result in the circumstances.

Retirements came not only from the luckless #24 Cool racing car but also from the #30 CD Sport Norma, Anthony Pons into the barriers at the top of Radillon after clipping the kerb, and the #21 DB Autosport Norma, pitting with electricsl woes at the same time.

Meanwhile, in GT3, Kessel Racing’s #8 Ferrari 488 GT3 controlled the race and took a big win after strong performances from Sergio Pianezzola and Giacomo Piccini. The win means that Kessel win the Teams’ and Drivers’ titles and an automatic invite to the Le Mans 24 Hours in 2019. 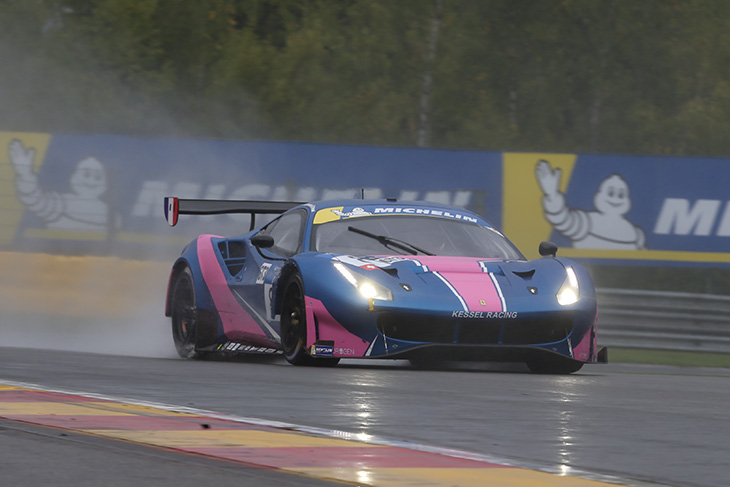 “I’m so happy, the races was the most difficult of the season because of the conditions. The pace was good I just had to control the second half of the race, we’re really proud of Kessel they did an amazing job,” said Piccini.

Behind the #50 and #77 Kessel Ferraris came home second and third making it a spectacular 1-2-3 finish for the Swiss outfit.