Black Falcon took its second win of the season by undercutting the other contending teams during the pitstops, pitting early in each stint and using fresher tyres to make up places on its rivals. Drivers Hubert Haupt, Maro Engel and Manuel Metzger drove a fantastic race to stay out of trouble and, despite a bit of fuel-saving towards the end of the race, managed to keep it together to take a well-deserved win.

In second, the #30 Frikadelli Racing Porsche of Norbert Siedler and Lance David Arnold rose up through the field from a starting position of eighth and finished 25 second behind the winners at the flag, while in third, the #3 Falken Motorsports BMW rounded out the podium in a car which lacked the pace of the Porsches and Mercedes.

The first hour of the race was headlined with a battle between the Frickadelli Porsches, driven by Norbert Siedler and Alex Muller, and the Wockenspeigel Ferraris, piloted by Nico Menzel and Oliver Kainz. The pole-sitting #36 Walkenhorst BMW dropped back almost immediately, ending up sixth by the end of the first lap, with the race now being led by a Wochenspeigel Ferrari 1-2, #22 from #11. However, this didn’t last long, as the hugely experienced Siedler, who started eighth, took second from #11 on Lap 3, making it stick after a first attempt using traffic to his advantage failed earlier in the lap. 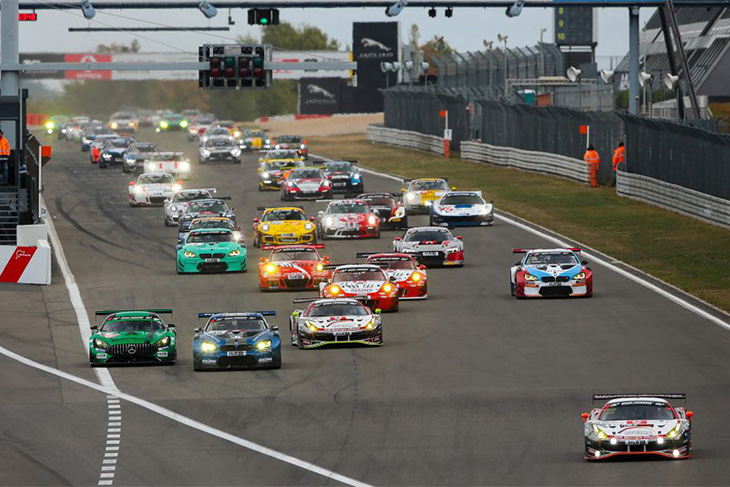 The pitstop cycle then started, with Maro Engel in the #6 Black Falcon Mercedes AMG GT3 being the first to blink on Lap 4. Over the next few laps, the other cars duly pitted, meaning it took a few laps for the order to shake out and settle down again.

At exactly 12:00, an hour into the race, the leading cars pitted bar first-placed #22 Ferrari, which stayed out for another lap, with the #31 Porsche, #11 Ferrari, #7 Lamborghini, #2 Porsche, and #4 SPX Porsche all coming in for regular stops. A lap later, the leader finally pitted, with Jochen Krumbach taking over the car from Kainz.

After the pitstops shook out, #6 Black Falcon Mercedes led from #35 Walkenhorst BWW and #30 Frikadelli Porsche, now being driven by Felipe Laser, by around a minute and a half. In fourth was Stef Dusseldorp, now driving #3 Falken Motorsports BMW. Fifth-placed #7 Konrad Motorsport Lamborghini was being pushed hard by Lance David Arnold, who despite an error on the live timing pages, had climbed into the car. However, early race leader #22 Ferrari suffered by stopping later than the other cars, dropping back to seventh as a result.

Engel pushed hard in his stint, setting a fastest lap of 8:02.728, while extending his lead to around 30 seconds. However, this didn’t last for long, with 12th-placed #36 Walkenhorst BMW going over a second faster, setting a 8:01.104. Laser in the #30 Frickadelli Porsche took second on the Dottinger Hohe from Rudi Adams, driving the pole-sitting #35 BMW, with Dusseldorp in the #3 Falken BMW following Muller through soon after as the cars approached the start-finish line.

On lap 11, the #4 Falken Motorports Porsche 911 GT3R, which was classed as an SP-X car due to it being the unhomologated 2019 version of the Porsche 911 GT3 R, had to pit, being pushed back into the garage to fix an undisclosed issue.

By virtue of pitting early, Engel was now out of sync with the other cars and came in from the lead on lap 12, with #30 Porsche taking over the lead of the race. Engel, who had been in since the start, climbed out, with Manuel Metzger taking his place, dropping down to 10th as a result of the out of sequence stop.

A lap later, second-placed #3 BMW pitted, taking the pressure off Alex Muller, who had had the BMW on his tail for the previous two laps. Dusseldorp swapped over for the experienced Dumbreck, who had started the race, the driver pairing seemingly doing a stint each. Also pitting was Rudi Adams in the 4th-placed Walkenhorst BMW, which saw British driver Hunter Abbott climbing in.

As teammate Laser pitted in the #30 Porsche, Arnold took the lead in #31 Porsche. He duly pitted on lap 15, for a full service, swapping with Nobert Siedler for the Austrian’s second stint at the wheel. The third-placed #7 Konrad Lamborghini also pitted, as did #2 Porsche, driven by Steve Jans, who climbed out to be replaced by Böckmann, Marek, and #36 BMW, from 7th place.

As with the previous pitstop cycle, the #22 Ferrari pitted last, a lap later than its peers, meaning it led another lap, but then fell back to 5th when Krumbach pitted the car on lap 16.

During the flurry of pitstops, Laurens Vanthoor brought out the #4 SPX Porsche after a spell in the garage, ending up in 25th place, a lap behind the leaders. As it was the only car in the SPX class, the race had always been a test session for the 2019-spec Porsche 911 GT3, with Vanthoor starting to put in quick, consistent times in the camo-Falken liveried car.

However, once again the #6 Black Falcon Mercedes rose to the top of the pack, with Metzger lapping faster than Engel had, on a 8:02.087. Once the order had shaken out, Peter Dumbreck held 2nd in #3 BMW and Muller in #30 Frickadelli Porsche, who had replaced Laser at the latest pitstop cycle. Siedler, meanwhile, was putting in quick laps in 4th-placed #30 Porsche, with Krumbach in the #22 Ferrari in 5th. The #7 Lamborghini and #35 BMW held sixth and seventh, while #2 Porsche with Marek Böckmann onboard rounding out the top eight.

When Metzler pitted the #6 Mercedes on lap 20, he had a lead of almost two minutes over Siedler, who had just taken second from Dumbreck in the #3 BMW and was now stretching his legs, creating a gap of around 4 seconds. Hubert Haupt, meanwhile, had got into the #6 Mercedes for the car’s expected final stint, although there was a worry if the car had enough fuel to finish the race without a splash and dash with a lap or two to go.

Two laps later, Muller pitted the #30 Porsche from 2nd, with Abbelen climbing in for the car’s final stint, dropping the car to 7th in the process. Siedler, meanwhile, was attempting to stretch his lead, before pitting on lap 22. This meant Krumbach once again led in the #22 Ferrari due to the car’s late pitstop strategy, but with Huapt less than a minute behind in the #6 Mercedes, this wouldn’t last long.

The #22 Ferrari eventually came in on lap 24, with Krumbach being replaced by Georg Weiss. This meant that Haupt once again took the lead, with a gap of around 25 seconds to Siedler in 2nd. It stayed that way until the end of the race, with Siedler not being able to match Haupt’s pace in the #6 Mercedes, although fuel saving from the #6 Mercedes meant the #30 Porsche did close up to within 15 seconds by the flag.

Closing out the podium was Stef Dusseldorp in the #3 Falken Motorsports BMW. The early leaders, the #11 and #22 Wochenspeigel Ferraris, finished fourth and sixth, while the sister Frickadelli Porsche #30 finished fifth. In seventh was #2 Porsche, while eighth and ninth was occupied by the pole-sitting #35 Walkenhorst BMW and its sister #36 example. Rounding out the top 10 was the #4 2019-spec Porsche 911 GT3 R, in the SP-X class.