Last weekend’s European Le Mans Series race at Spa was a strange one. United Autosports took the win in LMP2, and won LMP3 too, while G-Drive Racing coughed and spluttered its way to the title (and an automatic Le Mans entry) after an uncharacteristically sloppy performance on track.

The biggest story was the weather. The organisers started the race early to avoid – at least in part – the worst part of the incoming front, but ultimately the race started under Safety Car conditions, and with the rain coming down harder and harder, was called shortly after the halfway mark. We did get some green flag running though, and plenty of action. By passing the two-hour mark it meant that half points were dished out, race winners were claimed, and that two of the three class titles will go down to the wire at Portimao next month.

In similar fashion to last year’s FIA WEC race at Fuji – also interrupted due to rain – the race organisers ensured that the fans that braved it trackside, and those who had hung around all weekend in the paddock to compete, got to see some green flag running. We must thank Eduardo Freitas and co in race control for not only that, but their ever professional and sensible attitude to racing in adverse weather.

Up front, the day was Filipe Albuqerque and Phil Hanson’s. The duo ended up scoring their first win in ELMS competition as a pair, and the first for the team (and a Ligier chassis!) this season in the class. It came on the first weekend for United with Michelin in LMP2 competition, its JS P217s showing an early uptick in form, with #22 of Albuquerque and Hanson qualifying second and taking the win. The edge which the team hoped to earn from a change in supplier appeared to have worked!

United’s team in the pits opted to split the car’s strategy early in the race, pitting early under Safety Car with Hanson at the wheel, to allow Albuquerque to get to work early in the race and keep the team in the fight. It worked perfectly, as despite the car falling to eighth in the first hour due to the change in strategy, Albuquerque went on to take the lead early in the second hour, where he would stay until the ELMS called it a day.

“I’m so happy. We’ve fought so hard all season with no reward,” said an emotional Albuquerque. “Today was chaotic racing and often dangerous but I was determined to get this win for United. Eau Rouge was especially difficult when it was really wet. My pace in the wet was also good and I was just focussing on getting a big lead before handing the car back to Phil but of course that did not happen with the race being stopped which was completely the correct call from the race director.

“The Ligier was very, very good in qualifying – just brilliant in the middle section – and I was very happy to set a time so close to the championship leader who only beat me to pole in the closing seconds of the session.”

The #26 G Drive Racing Oreca of Andrea Pizzitola led the race from pole position as the #28 IDEC Sport Oreca of Paul Loup Chatin came into the pits to change tyres, the #29 Duqueine Engineering Oreca of Nicolas Jamin then snapping at Pizzitola’s rear wing for several laps before sweeping into the lead at Fagnes.

A 20 minute Safety Car for a pair of LMP3s in trouble saw several teams take advantage to come into the pits, including the #22 United Autosports Ligier with Phil Hanson handing over to Filipe Albuquerque.

When the race went to green again the #26 was being challenged by the #31 APR-Rebellion Oreca of Gustavo Menezes, the American pushing Pizzitola hard.  The French driver ran wide at Turn 14, running through the gravel trap and then did the same on the following lap as he avoided the stricken #12 Eurointernational Ligier that was stopped in the middle of the track, dropping the championship leading car to 9th.  Pizzitola headed to the pitlane to hand over the car to Jean-Eric Vergne.

Meanwhile back at the front of the field the #22 United Autosports Ligier of Filipe Albuquerque had fought its way to the front, with the Portuguese driver leading Julien Canal in the #23 Panis Barthez Competition Ligier by five seconds, with the no24 Racing Engineering Oreca of Norman Nato just 1.4 seconds behind Canal.

The troubles for the #26 G-Drive Racing Oreca were not over when Jean-Eric Vergne was challenging Ryan Cullen in the #31 APR Rebellion ORECA for track position.  The #77 Proton Competition Porsche of Christian Ried was trying to stay out of the way of the two protagonists but Vergne ran into the side of the Porsche on the run into the final corner, spearing the Porsche across the wet grass into the side of Cullen’s APR-Rebellion Oreca, badly damaging both cars.

Jean-Eric Vergne was judged to have caused the accident and was given a two minute stop and go penalty. However the #31 ORECA parked at the side of the track on the Kemmel Straight due to the damage from the accident and this, plus the #7 Ecurie Ecosse/ Nielsen Ligier of Colin Noble went off at Turn 4, bringing out the Safety Car for the third time.

The #26 G-Drive Racing Oreca was classified 12th in class when the two minute stop and go penalty was converted to two minutes thirty seconds that was added to their race time. However the Russian flagged team still came away with an unassailable lead ahead of the final round in Portugal and Roman Rusinov and Andrea Pizzitola were declared 2018 ELMS Driver Champions – their colosest rivals Racing Engineering not close enough to the front of the field to score enough points, in particular with only half points on offer, to take it to the wire.

LMP3 saw dramas galore, including several for podium contending cars – the #5 Nefis by Speed factory car the cause of the accident at La Source that ended the run for the Krohn Ferrari, the high flying #12 Eurointernational Ligier, and polesetting #17 Ultimate Norma both accident victims too though the #12 would at least be a classified finisher.

The class ultimately saw further success for the United Autosports team with the #2 Ligier-Nissan making it to the podium with 2017 drivers champion John Falb celebrating with ‘super sub’ Scott Andrews who was filling in for Sean Rayhall who couldn’t travel due to illness. The conditions caught out several drivers with Jean-Baptiste Lahaye’s Ultimate Norma snapping left in the wet conditions and hitting the barriers at the exit of Pouhon.

This brought out the Safety Car for 20 minutes while the marshals removed the stricken car from the track.  The Safety Car was about to come in when the AT Racing Ligier stopped on the Kemmel Straight which meant there was a couple more laps behind the Safety Car before racing went green.

The #15 RLR MSport and #11 Eurointernational Ligiers of Job Van Uitert and Mattia Drudi then fought for the lead, Van Uitert grabbing the advantage and pulling away after the disaster for Lahaye.

The #4 Cool Racing Ligier of Antonin Borga was soon closing the gap to the Dutch driver though with a mighty battle ensuing for the lead of the class which lasted several laps before Borga got past when Van Uitert ran wide at T14.

ALso coming back up through the field after an early issue was the #7 Ecurie Ecosse/ Nielsen racing Ligier, Colin Noble looking set to bring the car back into contention, the worsening conditions though caught out the young Scot – his off one of a number that saw the Safety Car scramb;ed, and the eventual Red Flag decision taken. 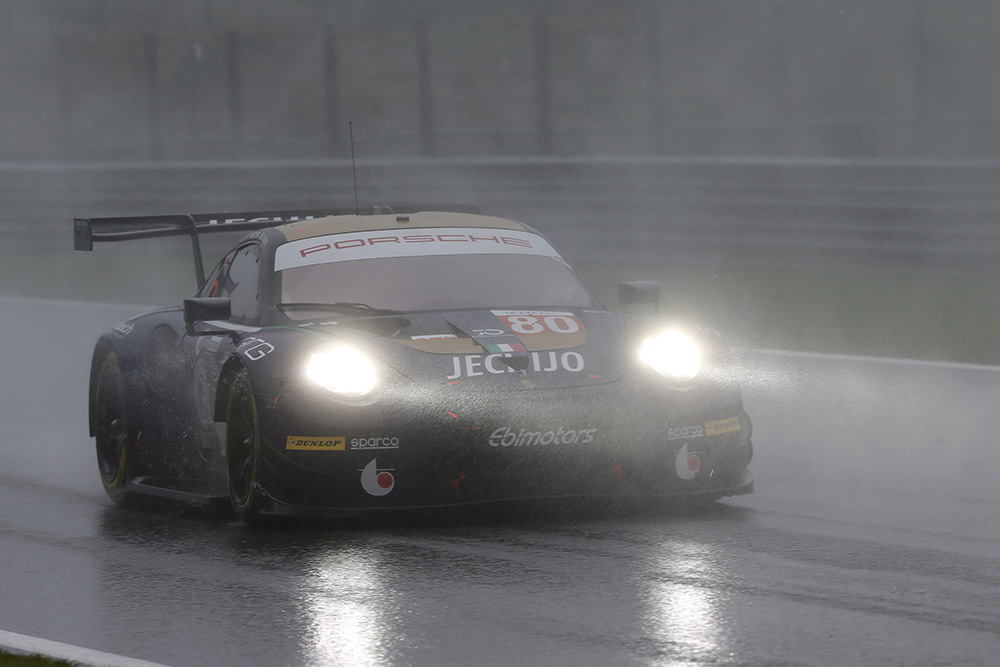 GTE saw one car eliminated – the #83 Krohn Racing Ferrari taken out at La Source as the #5 Nefis by Speed Factory Ligier took an aggressive line and collected the 488 – Nic Jonsson an entirely innocent party.

The #77 Proton Competition Porche saw trouble too, Christian Ried staying out of the way of the battling ORECAs of Ryan Cullen and Jean-Eric Vergne on the run to the Bus Stop but being collected anyway as the #26 man tried to pull off a somewhat pointlessly aggressive pass on the #31, moving to the inside he had not cleared the Porsche and clouted Ried off to the infield. The Porsche man was helpless from there on in, the car spinning across the sopping wet grass, making heavy contact with the rear of Cullen’s ORECA. It caused damage that would later lead to its retirement, and significant damage too to Ried’s 911 RSR.

He made the pitlane and stormed off from the car, likely to Race Control, the Proton team did fine work to get the car back out by the Red Flag but its competitive race was ruined, Vergne getting a two-minute Stop and Hold for his troubles!

That left four cars in the hunt, the Porsches with a clear advantage on pace this weekend, to an extent that more than irked the Ferrari runners, in the circumstances a second place for the #55 Spirit of Race crew must have felt like a win! Duncan Cameron drive well, backed up by Matt Griffin, Aaron Scott not getting a chance to drive.

But it was a first win for the #80 Ebimotors Porsche squad Ricardo Pera and Fabio Babini doing enough to secure the maximum available points, Bret Curtis not getting the opportunity to drive.

The #88 Proton Porsche would complete the class podium.