Ferrari scored its first Blancpain GT Series Asia victory of the season in the weekend’s opening race at Shanghai earlier today thanks to HubAuto Corsa duo Nick Foster and Jono Lester. The duo scored theirs and the team’s maiden win by a comfortable 13.5s from leading Pro/Am crew Anthony Liu and Alessio Picariello, while Andrew Kim and Adderly Fong made it a double Absolute Racing Audi podium. 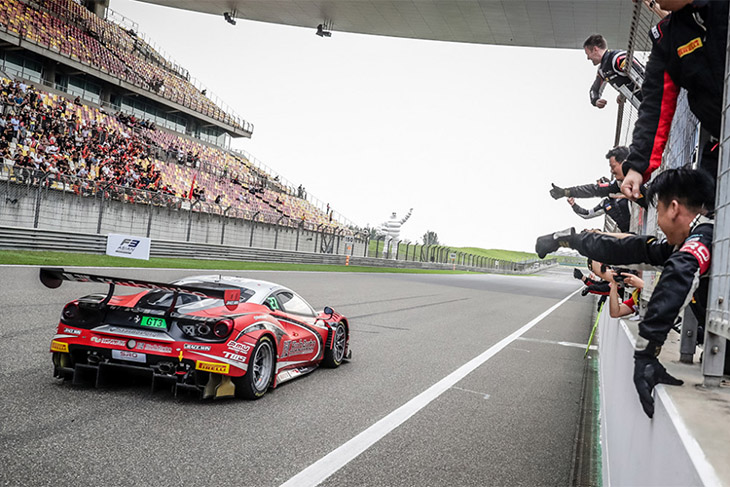 A frenetic first corner laid the foundations for an unexpected result that saw championship leader Patric Niederhauser tumble down the order while avoiding Franky Cheng’s Audi, which was tagged into a spin by Dennis Lind.

An unrelated incident featuring Shaun Thong and Yuke Taniguchi also necessitated an early Safety Car period, but when racing resumed in anger after 16 minutes it wasn’t long before Lester – up to second after starting fifth – inherited the lead as a result of Lind serving a drive-through penalty. There the Ferrari remained for the rest of the race, save for a few laps during the pit window, after both the Kiwi and then Foster eased clear of the chasing pack.

That same pack was headed pre-pitstops by Craft-Bamboo’s Darryl O’Young who benefitted most from the Turn 1 shake-up by vaulting from 10th to second. Lind’s penalty ensured the Porsche re-inherited the positon after Lester muscled past just before the Safety Car period, and remained there until just before the pitstops when KCMG’s Edoardo Liberati nipped through.

With Foster inheriting a healthy lead from Lester, all eyes were on who would emerge in second. Absolute’s Anthony Liu had been fifth but an early pitstop gave his Pro driver Alessio Picariello a precious few laps head-start on the other contenders, which ultimately paid dividends. Indeed, Liberati’s co-driver Florian Strauss emerged just ahead of the Audi but was unable to maintain second on colder tyres.

While Picariello edged clear, the Nissan had soon fallen into the clutches of O’Young’s replacement, Aidan Read. The pair ran closely for some time before a committed move along the back straight helped the Porsche to draft past. Adderly Fong, who’d benefited from the scrap, followed suit soon after before also relieving Read of the final podium place.

“It’s testament to this guy [Jono Lester] – his opening stint was brilliant!” Foster said. “He started way down the pack and he came out of nowhere, like a phoenix from the ashes! To be honest we’ve struggled all weekend so this has come as a massive surprise. We threw the kitchen sink at that race and the kitchen sink drives beautiful!”

Further back, Marco Mapelli was on the move aboard his FFF Racing Team Lamborghini. Fastest lap of the race helped the Italian pick up several places over the final 20 minutes, including that of Read’s fourth position, en route to making it three Pro/Am crews in the overall top-four.

Read, spurred on by the huge home crowd supporting Craft-Bamboo’s Shang Peng Gao Ke sponsors, gave the packed front grandstand something to celebrate by finishing fifth ahead of Strauss, who resisted late pressure from Lind’s recovering co-driver, Martin Kodric. Aditya Patel was right behind them in the OD Racing Team WRT Audi he shares with Mitch Gilbert.

Shae Davies started 22nd but finished ninth alongside Sandy Stuvik in the second of Craft-Bamboo’s Porsches while championship leader Niederhauser and his co-driver Nico Bastian salvaged a point for 10th after their first lap drama.

In GT4 Championship leader Reinhold Renger extended his advantage in this year’s title race with victory over his nearest rivals today. The German took advantage of pitstop success penalties and Team iRace.Win’s slow driver change to assume the lead before coming home 14.1s ahead of BMW Team Studie’s Takayuki Kinoshita and Sunako Jukuchou. 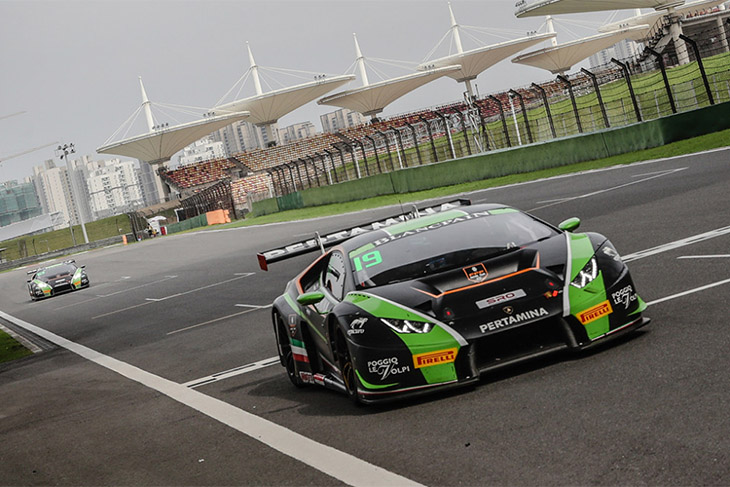 Their team-mates Hiroshi Hamaguchi and Marco Mapelli came home just 1.2s behind after Alexander Mattschull spun out of the lead on the penultimate lap while under intense pressure from both Huracans. However, the GruppeM Racing driver recovered to claim the final overall podium position with co-driver Raffaele Marciello.

Kodric lined up on pole but was immediately swamped on the run to Turn 1 by front row starter Raffaele Marciello and FFF Racing team-mate Marco Mapelli. Indeed, the #19 Lamborghini had dropped to sixth by the end of lap one after also being passed by Alex Imperatori’s KCMG Nissan, the HubAuto Ferrari of Tim Slade and Nico Bastian’s GruppeM Mercedes-AMG.

Martin Rump initially fell back from third but had moved Absolute Racing’s Audi up to fifth before the pit window opened at the expense of Bastian and Kodric, who also cleared the Mercedes-AMG to remain sixth. There was also a change for third when Slade passed Imperatori.

By that point Marciello had established a small but consistent 1.5s advantage over Mapelli who continued to track the leading Mercedes-AMG before the stops began after 25 minutes. Both pitted late in the 10-minute window in order to maximise their Pro stint before Am co-drivers Alexander Mattschull and Hiroshi Hamaguchi climbed aboard.

Further back, FFF Racing opted to pit Kodric at the start of the window. And that strategy paid off when Dennis Lind emerged in fourth. That quickly became third at the expense of Morris Chen, who’d taken over HubAuto’s Ferrari from Slade, before the Dane focused on reducing his 11s deficit to the leaders.

He arrived on Hamaguchi’s tail with five minutes remaining and duly took second through Turns 1 and 2. But Mattschull, who was just ahead at that point, proved far harder to budge and as the trio encountered traffic on the same lap a three-wide battle broke out down the back straight. Hamaguchi initially led before running wide at the hairpin, which gave Lind another shot at GruppeM’s Am driver.

Mattschull’s dogged defence was finally undone halfway around the penultimate tour when, under intense pressure from both Lamborghinis, the rear of his Mercedes-AMG broke away and sent the German spinning. Lind just avoided him as they negotiated the high-speed Turn 7 before going on to beat Hamaguchi to the chequered flag.

Mattschull recovered to come home 10s behind and just 0.7s ahead of Franky Cheng whose Absolute Racing Audi ran fifth in Rump’s hands before the pitstops. GruppeM’s erstwhile championship leader Patric Niederhauser claimed fifth alongside Bastian while Edoardo Liberati and Florian Strauss’ KCMG Nissan battled through from 11th to complete the top-six.

All of that means Kodric and Lind carry a 12-point advantage into Ningbo’s season finale on October 13/14, while Foster is another eight points behind Niederhauser in third. A maximum of 50 are up for grabs across both 60-minute races.

“It was a bit scary, really!” Lind commented. “We were very close, and it’s always especially nerve-wracking when it’s with your team-mate, but that’s what we’re here for. Everything was very fair – we had a few touches but when you’re racing through corners at these speeds it’s bound to happen. So I’m happy that everyone emerged relatively unscathed! It was good fun racing with Hiroshi and Alex.”

Elsewhere, KCMG’s Naoto Takeda and Takuya Shirasaka wrapped up the Am Cup title with a race to spare in their Audi by beating rivals Andrew Macpherson and Ben Porter. It was actually Singha Plan-B by Absolute Racing’s Jingzu Sun and Bhurit Bhirombhakdi who scored class victory but the Japanese duo’s second place was enough to build an unassailable lead over their AMAC Motorsport rivals.

In GT4 Sunako Jukuchou and Takayuki Kinoshita put themselves squarely in this season’s GT4 title fight by claiming theirs and BMW Team Studie’s fourth win of the season at Shanghai earlier today. It means the Japanese pairing head to Ningbo’s season finale 11 points behind Reinhold Renger whose GruppeM Racing Mercedes-AMG retired with a battery issue just after the pitstops.

Ningbo hosts the final round of this year’s Blancpain GT Series Asia campaign on October 13/14.