Le Maine Libre has reported that Audi look set to return to the Le Mans 24 Hours by around 2022 as the marque prepares to field a hydrogen-fuelled prototype racer as part of the expected new for 2024 ‘zero emission’ regulations.

The regional newspaper for Le Sarthe says that Audi is secretly working on a hydrogen-powered racing car for Le Mans, that would put Audi in the mix alongside BMW, also targeting a hydrogen-fuelled racing future along much the same timeline. 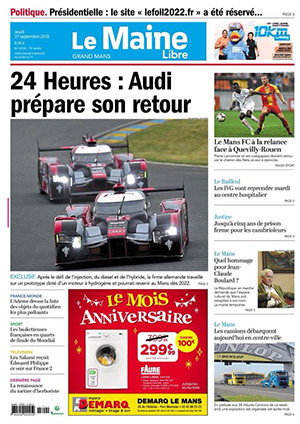 With no need for overalls or helmet, they fit the valve and job done! Or almost. Hydrogen (gas) is contained in sealed tanks at 700-bar pressure. The tank’s seals and contents are systematically checked before the hydrogen is injected.

The H24 demo car is fuelled with hydrogen produced using a carbon-free process obtained using water electrolysis where the electricity is generated by renewable sources (water electrolysis applies an electrical current to split water into oxygen and hydrogen).

Pierre Fillon, President of the Automobile Club de l’Ouest, “Mission H24 embodies our commitment and our beliefs. Last June at the 86th Le Mans 24 Hours, we announced our intention to create a hydrogen class for Le Mans 2024. Things are now starting to happen. We believe in hydrogen, just like we believed in hybrid technology and the introduction of a limited energy allocation.

“Today, hybrid cars are driven on pub- lic roads across the world. Research is an ongoing concern for us as the organisers of the 24 Hours, and encompasses the fields of safety, performance, lower fuel consumption and environmental protection. At the ACO, we have always worked alongside manufacturers and other stakeholders in the automotive sector, and we see Mission H24 as a genuine commitment to future mobility.

“With assistance from Green GT, we will rise to this new challenge and will keep you regularly updated, at every step of the way to our ultimate goal in 2024.”

Jean-Michel Bouresche, CEO of Green GT Technologies added: “We had no hesitation in joining the ACO on Mission H24. We have been convinced about the potential of hydrogen for several years now and have developed sound experience and recognised expertise in the field. Speeding up the research process via motorsport is a challenge that we are enthusiastically, but realistically, ready to accept.”