With just under two months left before the season-closing Hankook 24H COTA USA, 60 cars have already been registered for the final round of the 2018 24H Series, more than one-third up on last year’s entry list.

And amongst the teams on the list more than a dozen US-entered cars now feature, a significant upturn from 2017’s total at the Circuit of the Americas.   Last year, the 24H Series travelled to the home of the Formula 1 United States Grand Prix for the very first time, capping off the season with a format unfamiliar to US racers but which suited the quartet of American entries well, all four finishing on their respective class podiums, Classic BMW even netting a CUP1 class win on its series debut. 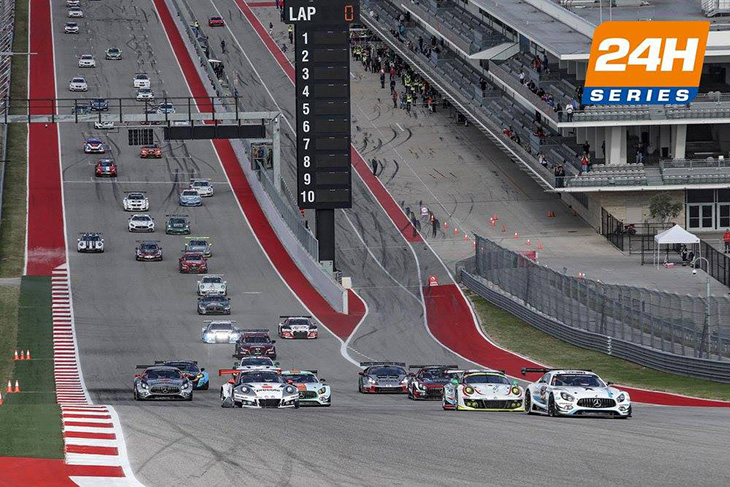 This year 15 US entered cars already feature on the entry with several others, including some well known names, still possible additions before entries close.

Both Classic BMW and Freem USA return to action at the Hankook 24H COTA USA on 16-17-18 November, alongside some other familiar names on the American racing scene in a variety of classes, and with a variety of machinery!

Amongst the teams that have expressed interest in the COTA race but have yet to declare their hand are Flying Lizards, CJ Wilson Racing, Kelly Moss, Moorespeed, Team Panoz Racing, Realtime Racing and Truspeed.

Scuderia Cameron Glickenhaus,  SCG 003C (#49)   American entrepreneur James Glickenhaus’ eponymous team is set to enter a SCG 003C in CREVENTIC’s top tier A6 category for the first time since the 2016 Hankook 12H MUGELLO. Now a ‘Low Volume Manufacturer’ in North America, Scuderia Cameron Glickenhaus LLC is set to produce up to 10 examples of its SCG 003C ‘Competizione’ racecar in 2019, at the base of which is a 4.4-litre twin-turbo V8 that produces ‘more than 750hp’ and LaFerrari levels of straight-line pace. That the SCG 003C is also a three-time SP-X class winner at the Nürburgring 24 Hours in the last four years is another reason this bespoke, track-going hypercar should be on your radar.

The Porsche Broker, Porsche 991-I Cup (#122 and #124)   A Porsche specialist as the name suggests, the only American entrant thus far in the 991 class boasts more than 30 years of experience with Stuttgart’s most famous manufacturer on both the track and the road. Having worked and competed liberally with the Porsche Club of America and Porsche Owners Club so far this year, the South California operation makes its 24H SERIES debut with two brand new 2018MY Cup cars.

RHC Jorgensen/Strom, BMW M4 GT4 (#113)  Based out of Thermal in California, Daren Jorgensen’s outfit is the first of five American squads competing for GT4 honours at COTA after a busy season competing in the IMSA Continental Tire Sportscar Challenge, the Pirelli World Challenge, and the SRO Intercontinental GT Challenge. You can also add a joint endeavor with MARC Cars at this year’s Bathurst 12 Hours in Australia to that list. On its CREVENTIC debut, the US GT4 squad brings its new BMW M4 (complete with M TwinPower Turbo straight-six), as well as Daytona 24 Hours class winner, Kuno Wittmer, and five-time winner at the prestigious 25 Hours of Thunderhill, Brett Strom. The 2018 Hankook 24H COTA USA marks the team’s 24H SERIES debut.

Rearden Racing, Audi R8 LMS GT4 (#253)  Founded in 2005 and currently based in Salt Lake City, Utah, this American outfit is no stranger to the Circuit of the Americas, having raced, and taken class victory, in both the Pirelli World Challenge and Pirelli GT4 Cup. Staunch Nissan customers for many years, the team’s 370Z even took a TC-class championship in PWC this year, though Rearden Racing will make its 24H SERIES debut aboard an Audi R8 LMS GT4. A manufacturer and distributor of racing parts and components nationwide, Rearden Racing’s business model includes ‘arrive and drive’ packages for budding race enthusiasts in North America.

Automatic Racing, Aston Martin Vantage GT4 (#265 and #266)  This Florida-based team makes its 24H SERIES debut with the 4th and 5th confirmed Aston Martin Vantages entered for the Hankook 24H COTA USA, though AR’s Gaydon connections as ‘the first American based team to race an Aston Martin on US soil in over a decade’ only date back to 2012. 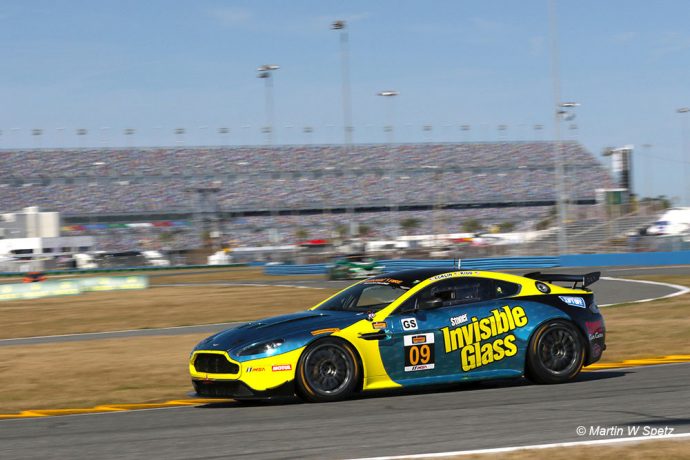 Originally founded by Jep Thornton in 2001 and established specifically to race in the Grand-Am Cup (now IMSA’s Continental Sports Car Challenge), the team’s original charger was a BMW E46-gen M3, with which the Orlando-based outfit would win the 2007 Grand Sport (GS) class title. The team’s V8-powered Vantage GT4s will round out their season at COTA having spent the season competing for the IMSA Continental Tire SportsCar Challenge title.

RENNtech Motorsports, Mercedes-AMG GT4 (#270)   Originally established in 1989 at the hands of former technical director of AMG North America Hartmut Feyhl, RENNtech Motorsports has been an official Mercedes-Benz affiliate since 1999 and prides itself on being ‘the only AMG-derived Mercedes-Benz tuner in the world’.  Although the Hankook 24H COTA USA marks the team’s 24H SERIES debut, the Floridian squad has this year competed with its brand new Mercedes-AMG GT4 in the Pirelli World Challenge, the IMSA Continental Sportscar Challenge, and Michelin IMSA Sportscar Encore. At the heart of the operation is the AMG GT4, a track-spec version of Mercedes’ ferocious GT R supercar that produces 510hp from its 4-litre birtubo V8, and a soundtrack guaranteed to rattle fillings loose in the paddock. 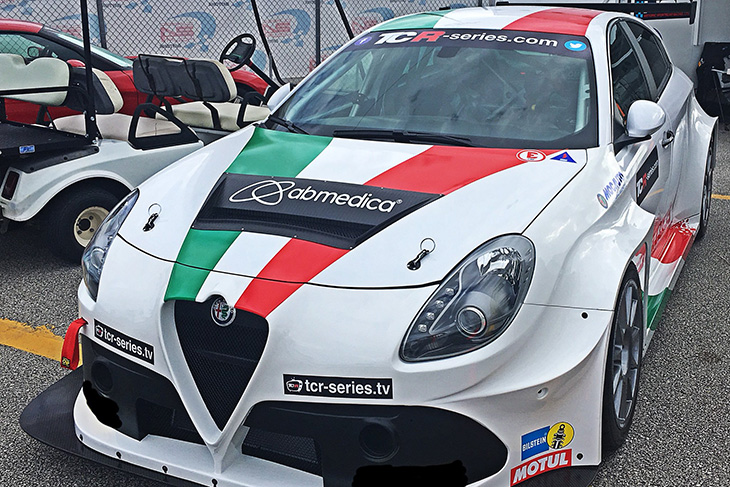 At the heart of the operation is the former Le Mans GT2 class-winning BAM! Organization that now serves as the North American representative for Romeo Ferraris, which builds the Alfa TCR car on behalf of the Italian manufacturer. Competition has focused primarily on this year’s Pirelli World Challenge as part of the series’ new TCR division. Expect a warm reception for the cloverleaf’s archetypically melodious soundtrack from one of the strongest TCR grids fielded this season.

AR Motorsports, BMW M235i Racing Cup (#182) A BMW privateer proficient in both GT and TCE competition having raced and tested extensively in both the Nürburgring’s VLN series and the Pirelli World Challenge. Boasting 26 years-worth of racing experience, and intent on bringing ‘the high standards of European motorsports to the American market’, AR Motorsports will make its 24H SERIES debut in the hotly contested CUP1 category with the 333hp turbocharged straight-six against reigning TCE European Champions Hofor-Racing bei Bonk Motorsport and former class winner, Sorg Rennsport. Talk about a tough debut!

Classic BMW, BMW M4 GT4 (#272) and BMW M235i Racing Cup (#183)  This Dallas-Ft. Worth-based outfit is one of the most prolific supporters of BMW in the American southwest, competing under the Bavarian banner in the Pirelli World Challenge and operating its own dealership for the company’s roadcar products. Successful as distributors of BMW-spec performance componentry, Classic BMW is also a former TC-class champion in PWC and is fast-becoming one of the most recognisable names in American endurance racing: at the Utah PWC event back in August, the team entered a whopping SEVEN BMW M235i Racing Cups for the event. That the squad is entering two different categories at COTA and is the reigning CUP1 winner should tell you how serious they are.

Freem USA, Porsche 991-II Cup (#59)   Originating in Italy in 2001, Freem is among the most popular and sought-after manufacturers of racing apparel and accessories. The brainchild of three friends, the then-Free Minds srl has expanded exponentially from its early days as an R&D studio in Treviso, Veneto, its distribution network now global reaching after 15 years as a registered trademark. 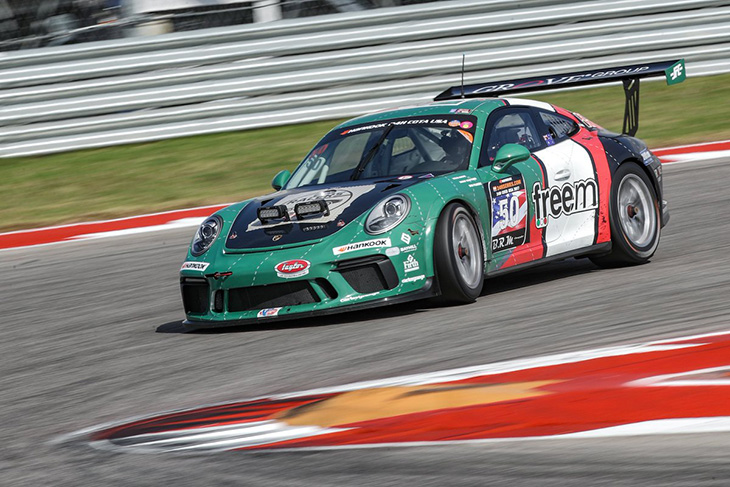 Once again under the guidance of Freem USA president David Taylor, the Italian conglomerate returns to the 24H SERIES for the first time since taking 2nd place in the 991-spec category in 2017. Once again with a second generation Porsche 991-II Cup, complete with 4-litre flat-six. No guesses which brand their drivers will be wearing!