Nordschleife racing is something that most self-respecting sportscar folk, and all pro level GT drivers should have on their CV.

It had been a bit of a glaring omission from mine at least. Having completed in most, led in some and been lucky enough to make the podium/ winner’s circle of a few of the world’s serious endurance races.

So, I asked friends and mined some, not particularly readily available, information to find that there was a ‘short cut’ permit for pretentiously carbon fibre helmeted, sponsor suited, International Licence holders such as myself, to get involved in VLN racing.

VLN, as you’ll all of course know, is short for; Veranstaltergemeinschaft Langstreckenpokal Nürburgring and takes place exclusively on the northern loop. It is the series that orbits around the Nürburgring 24 hours (N24) and is open to a vast array of cars from works level GT3, to some stuff that looks like it would struggle to get an MOT renewal.

So, what does achieving the VLN and N24 permit entail?

Firstly an online test set by the DMSB (ACO of the ring) to clear up the slightly quirky rules of VLN racing was completed under the caring gaze of the Daily Sportscar team, while sharing the commentary box with Graham Goodwin for the weekend in ELMS Monza. This event was, as you might imagine, the conception of the diary piece you are reading. As I was typically reserved all Monza weekend, in my excitement about my plans. I considerately left at least 10-minutes between instances of reminding the DSC team, that I would be going to the Nürburgring to do my permit, and this was very cool.

With the online test completed, remaining was the fun stuff on circuit. A day of ‘permit school’ is required along with 2 VLN participations totalling 18 racing laps without you or your team mate binning it or getting into trouble. You also have to finish within the top 75% of your category in all races counting towards those performance laps.

For this reason your pairing is important. So, I headed to the ring relying on the (luckily considerable) talents of ‘all sorts’ GT3 driver Michele ‘Mike’ Beretta, who was chosen by the team and on exactly the same program as me to complete his permit laps. 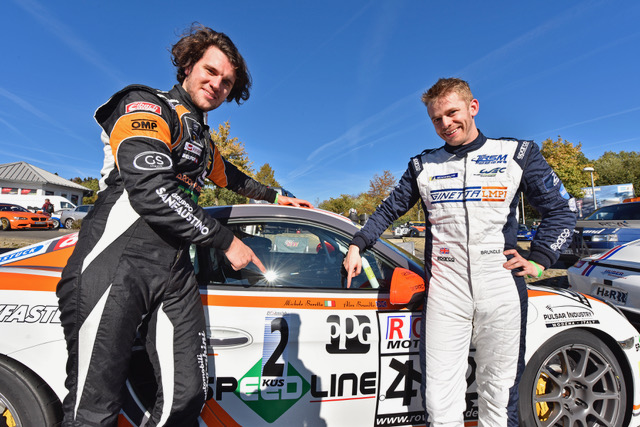 There is also a maximum power to weight ratio for vehicles to achieve these laps, which I’m sure would interest some but I will summarise as ‘not particularly fast’. I believe other drivers have used alternative descriptions. The permit school and first VLN race of the program would be achieved over a single 48-hour period so the lapping would be quite intense. Time to learn fast.

I checked in on Thursday with ring specialists PROsport performance to meet the restricted Porsche Cayman lovingly dubbed ‘the Snail’ by Nick Tandy who had attained his permit in the same car. 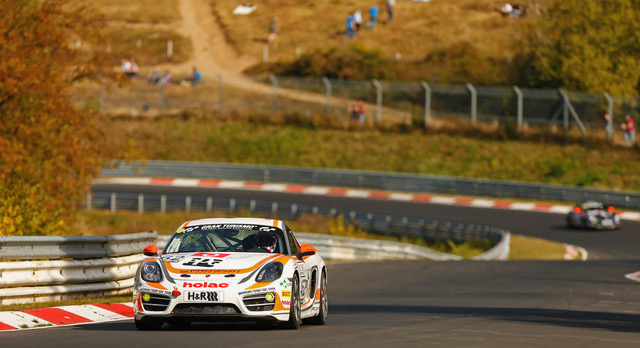 The permit briefing was later that evening. It constituted another run over the rules and a collection of videos, which resembled my YouTube search history, of drivers getting various things expensively wrong in past VLN events. Before heading off to check into a nice guesthouse, conveniently located in central nowhere, about halfway between the team and the ring.

Bright and early Friday morning after an explanation from the team to look for ‘The Devils Diner’ (which I’m sure is embarrassingly famous) to find the tourist entrance for the ring. I rocked up to start my first day of ‘taming the snail’ around the longest racetrack in the world. 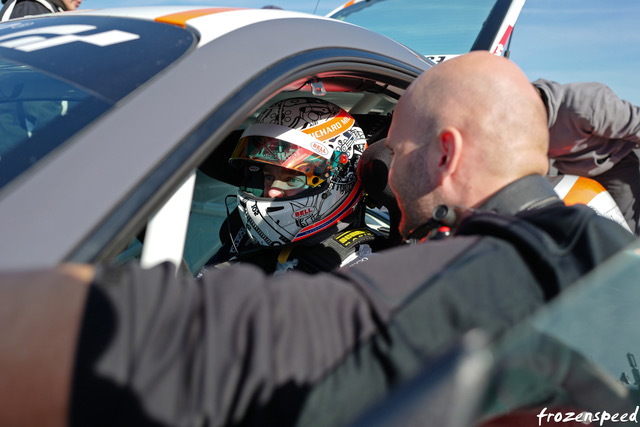 The permit course consisted of 8 guided laps with Dale Lomas, the very experienced driver of the Jaguar ring taxi, leading us in his F Type and then some laps alone. Eight laps sound like nothing but that constitutes about an hour and thirty minutes of driving with him imparting his considerable knowledge of the circuit via car to car radio. It was massively valuable, I took quiet notes and tried to max it out.

I have driven plenty of cars on plenty of tracks. Some of them very, very fast indeed in the dark, day and twilight. But I have to tell you; the first lap of the ring, together with some ‘showbiz’ mist banks, wet patches under the trees and a few gaps in my knowledge of where we were going next was a tremendous experience. 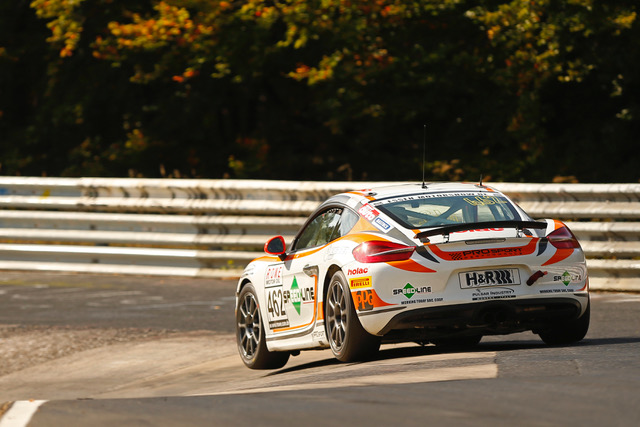 The place is uncompromising and unrelenting, lavishly rewards competence and harshly punishes any holes in technique or understanding. Very cool stuff.

Then followed 8 unguided laps where our job was to follow all the rules VLN style, not crash and not annoy anyone. Mike and I headed out together but are very sensible so went incredibly slowly and left a huge gap between our cars so absolutely no racing occurred at all during those laps.

We finished up with the permit around 1:30pm and had both managed to pass so we were able to participate in the weekend of VLN 8 and get cracking on our 18 in race performance laps. 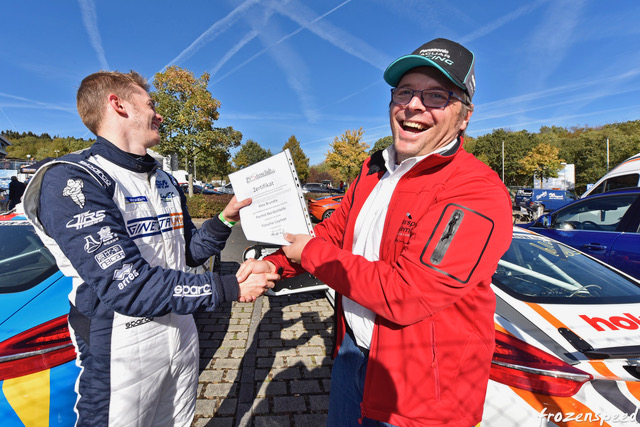 To get things paid for, the team had invited some guests to come and sit next to us in the ‘training’ VLN rules session on the Friday afternoon. I may have forgotten to mention to the two very nice German blokes who sat next to me that those were my 9th and 10th ever unguided laps of the Nürburgring but they seemed to enjoy it. The second one clapped enthusiastically for the entire length of the back straight. Nice confidence boost into the race weekend.

On the passenger laps, I floated the car through the first three corners of the GP track loop thinking ‘blimey this thing feels a bit strange, maybe there is something not quite right here’. Through the quick chicane at the end of the GP loop the back stepped out a little and I was worried. I turned the wheel, grimacing, on to the Nordschliefe and in to the first sequence preparing to catch, what I assumed would be, tricky oversteer moments, to find: stable perfection.

It then occurred to me, why set a car up for billiard table smooth F1 tarmac with 8 minutes of weathered bumpy Nordschiefe still to drive? ‘These PROsport guys might have done this before’ I thought.

The VLN paddock was very much a new adventure and absolutely absent pretence. It’s populated by Gents having genuine fun in various classes of cup and road going cars with absolutely no ‘Hospitality tent preening’. The racing is risky and old school, if the autograph session is your favourite session of the weekend then this is not the series for you! Alongside these, there are friendly but competitive high-level pros and works drivers. Being serious, respectful and going very, very fast. It’s a cool place to be.

Saturday morning qualifying was a bit interrupted. The circuit was wet and drying but we managed to bang in a lap for p4 on the grid. That said, it appeared that management of the code 60’s was everything and we were over a minute off the times we would later achieve in the race.

All of this would be irrelevant however as we were eventually DQ’d from qualifying on a technical matter. I believe a roadcar part which is particularly temperamental on the Caymans had been replaced by the team for reliability with an alternative to make sure we didn’t lose our permit laps to a failure. But being in the ‘V’ or ‘road going’ classes this was not admissible. So, I lined up for the start at the absolute back of starting group a long way behind the back of the ‘pretty big’ Cayman V5 field.

I should mention that VLN as a total series is not won overall by the fastest class of car, far from it. Points are handed out equally to all classes and depend on the number of cars in your own class you have beaten in each race. Naturally the cheaper more accessible classes are often bigger and therefore afford the opportunity to beat more people and earn more points.

Our V5 class was one of the biggest so absolutely stacked with both specialists trying to become VLN Champion and Pro level drivers earning their permits just like me. A great training ground, but from the absolute back of the grid (behind all the traffic) I had some fast locals to pass to even make the 75% point which would earn us our permits.

To give you a feel I started directly behind a completely stock Vauxhall Astra on semi slick tyres, he weaved for the entire 12-minute formation lap of the Nordschleife and defended the inside into turn one. Take a bow sir!

The traffic at the start of the race was like nothing I have seen in my racing career. Normally a driver would complain about traffic as there was nowhere to pass the car ahead. This was different, there was actually nowhere to ‘be’ even maintaining your position there were times when there was physically just not enough space on the road for all the cars at once. 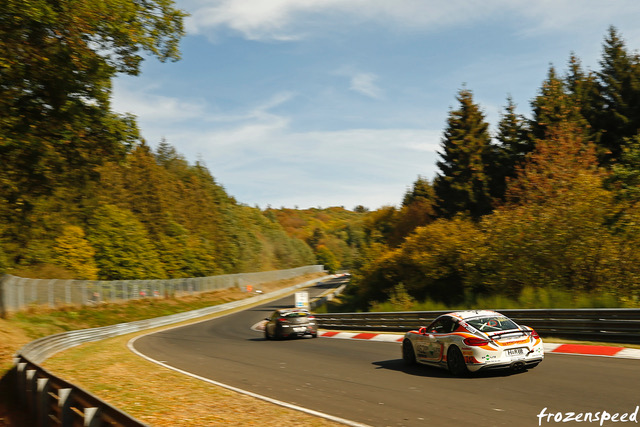 It was a little wet still, in some of the fast kinks which was a blessing as it gave me opportunities to stay on the gas and ‘out drag’ a majority of the lower order to the next braking zone.

Around lap 3, I had made it to p6 in our class and finally got a clear-ish lap with no code 60s and general carnage. I tentatively asked how the pace was and got ‘very good mate, you took 7 seconds from the leader this time around’. I was pretty happy with that until ‘but we lost over a minute at the start catching up from the back of the field, so keep pushing’. That bonfire didn’t last long!

I continued through the stint and came in P4, but it looked like the top 3 had made the jump while we were messing around in traffic and were long gone. Mike did a very fast and reliable stint and gave the car back to me for the end. We brought her in p4 but more critically got the permit laps in and a whole load of experience. 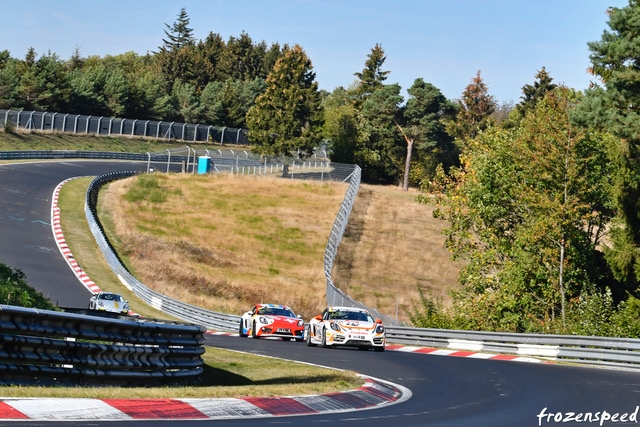 Getting straight to the pace on Saturday, when I felt like I needed a GPS on Friday morning was a really satisfying achievement and I owe a lot to the PROsport guys for putting out a great car for me to do the permit laps and the race.

The journey is not over, and we need to head back in 2 weeks for VLN 9 to complete the laps on the Permit journey. Then who knows! We’ll see what comes next 😉

Pics with thanks to and copyright of Jochen ‘Frozenspeed’ Van Cauwenberge