Whilst the wheels may have looked to be turning slowly on the regulations set to replace the current LMP1 ruleset in time for the 2020/21 FIA WEC (and for the 2021 Le Mans 24 Hours) there’s been plenty of action behind the scenes with the timetable now set for their adoption.

The continuing work of the technical working groups saw an outline presented to the FIA’s World Motorsport Council (WMSC) last week with the full regs now due to be sent to the FIA Endurance Commission on 9 November whereafter they will be submitted for formal approval by the WMSC on 5 December.

In advance of that a delegation including ACO President Pierre Fillon, FIA Endurance Commission President Richard Mille and WEC CEO Gerard Neveu is in the midst of a round robin of seven board-level presentations to manufacturers, and whilst they include OEM that have been taking part in the technical working groups, senior sources have confirmed to DSC that three of the presentations have been at the request of manufacturers not thus far engaged in the process, at their request, after receiving details of the proposed ruleset.

After conversations with some of those involved in the technical working groups, together with senior sources within the rulemaking bodies, it is now clear that the progress made since the outline presentation of the ‘Hypercar’ concept to media and industry at the Le Mans 24 Hours has been significant.

Further downward pressure on budgets has been made in response to both manufacturer and privateer requests. With further detail also now in play on measures designed to encourage privateer programmes and maintain their ultimate competitiveness. 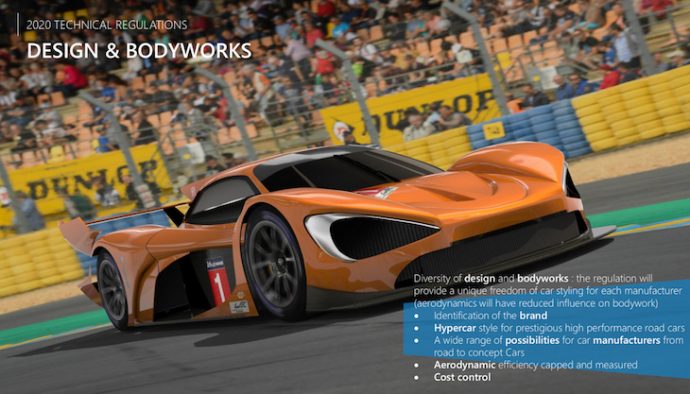 To remind readers of the basic principles involved the new cars will be based on a very different, but still full race, carbon chassis, with very limited opportunities for aero development, and with clear styling cues to relate the cars directly to the roadgoing products of any manufacturers that choose to join the Championship.

They are not racing versions of roadgoing hypercars!

The cars are set to feature a single ‘mild’ hybrid system, operating on the front axle only. 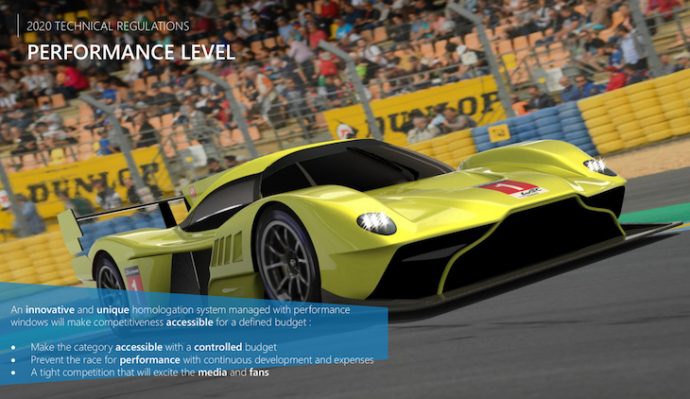 The Performance window for the cars has been established and offers real opportunity for entrants to consider a wide range of engine options. Engine power is restricted to 520 kW (just shy of 700 hp) – There is no restriction on engine architecture meaning that either road derived or pure race engines can be selected.   The regulations will again govern both performance and fuel consumption. 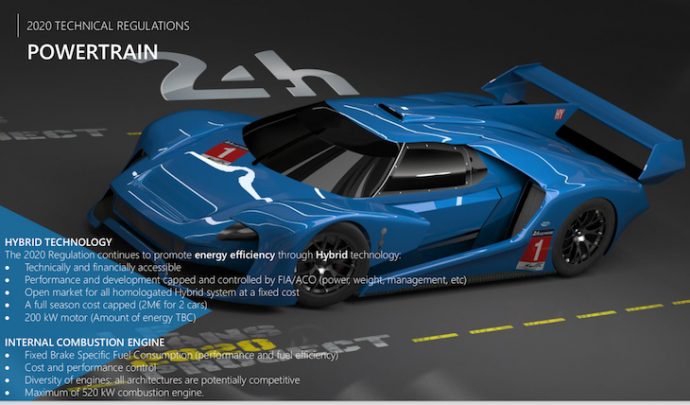 The hybrid system will be restricted to a 200kw motor (c.270hp) with the amount of energy still to be confirmed.

There is though a cost cap to be applied to the system in an open market for homologated hybrid systems, all systems must be available to any privateer team that wishes to utilise them at a fixed cost of 2 Million Euro per season for 2 cars.

The performance window applied in the regulations has been designed to ensure that any escalation of development is contained, a team could spend on development but will not be permitted to perform outside the performance ‘window’. That, in turn, should mean that the racing in the top class stays close, not only between any manufacturer entries, but also for any privateer takers for whom the same controls will apply.

The ultimate lap times for the new cars are envisaged to be slightly slower than the current generation of hybrids, ultimate speed sacrificed for sustainability and close competition and that is likely to see LMP2 speed reeled in a little to maintain a gap between the two prototype classes.

The 2020 regulations are designed for an initial five-year lifespan, evolutionary updates are allowed either for styling purposes or to recover performance if they are not reaching the ‘window’ as well as for safety and reliability. 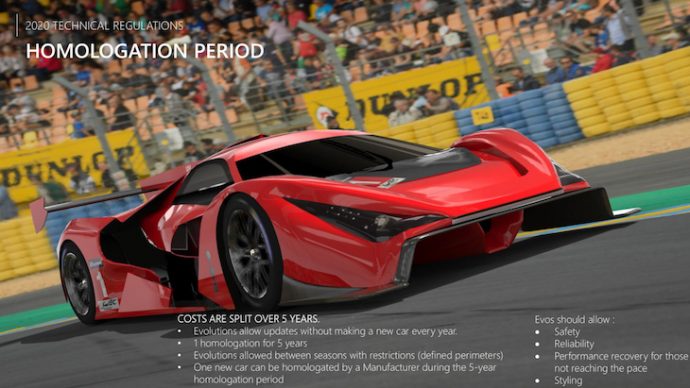 Outside of the styling and powertrain the other major topic of discussion for the new regulations has been the potential budgets and cost controls. On that front, it is now clear that some further progress has been made.

Additional measures now proposed in the interests of cost control include:

The adoption of a single tyre supplier, felt to be entirely appropriate with such a tight performance window being applied;

Restrictions on testing including no testing during the overseas season, no access to the cars outside race weekends, adoption of three ‘collective’ tests (including two endurance tests) of 2 days apiece plus four free test days;

Limits on numbers of engines and ERS systems useable in a season;

Limitation on crew numbers, and;

A single pit stop area per two-car team (except Le Mans) meaning that pit equipment and personnel costs will be reduced. 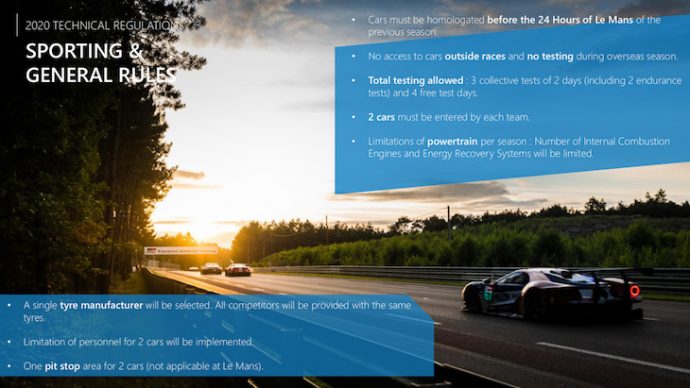 It is currently envisaged that a two-car team from a manufacturer could be delivered for 20 Million Euro per WEC season and that a Privateer team, benefitting from the open market and cost control in hybrid powertrain costs could do the same for c.16 Million Euros, again for a two-car effort. 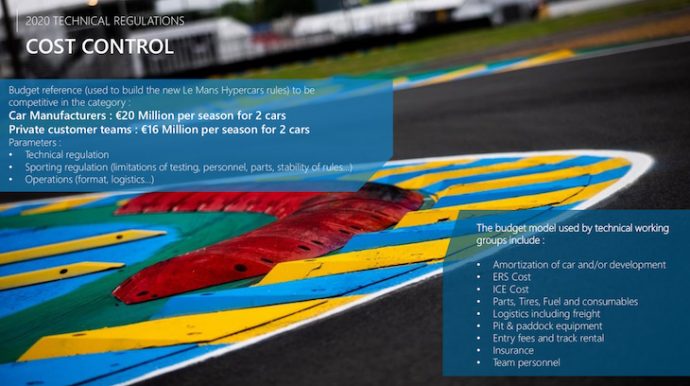 There would be no restriction on any team decision to spend more, but it was made very clear that this would not be permitted to result in any performance advantage. 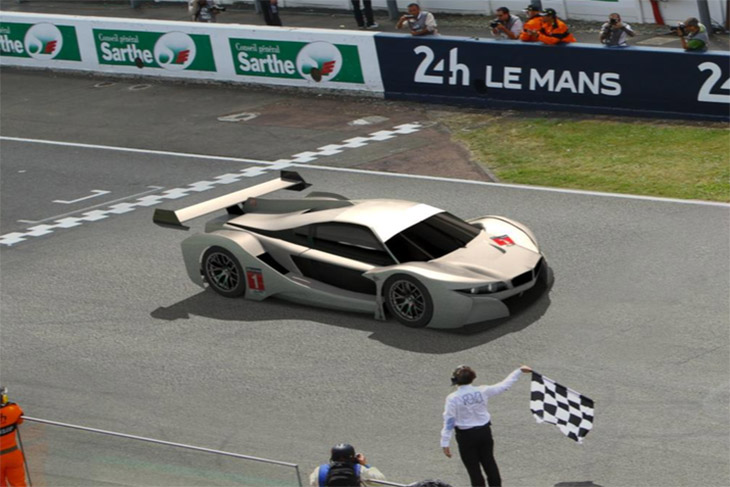 The name of the new class will be determined early next year after a public polling of industry and, in particular, fans, offering around 10 alternatives featuring the key words and phrases involved in the definition of the new cars. GT McGT Face is unlikely to be an option offered!

Decisions on grandfathering of any existing non-hybrid LMP1s would be made closer to the point of delivery of the new regulations, and then only if the numbers of new cars were felt to be at too low a level.

More on this story later this week on DSC