The #8 ARTA Honda NSX-GT of Tomoki Nojiri and Takuya Izawa will start Sunday’s Autopolis GT 300km Race from pole position tomorrow, after leading a Honda 1-2-3 in qualifying for the penultimate round of the 2018 Autobacs Super GT Series.

It’s the second GT500 pole position of the year for Autobacs Racing Team Aguri, one that gives Nojiri and Izawa a crucial bonus point in the championship that closes their deficit to championship leaders Naoki Yamamoto and Jenson Button to 11 points.

After a chilly practice session in the morning, qualifying kicked off at 14:30 JST (local time). While air temperatures stayed at 15°C, the track temperatures did make a big jump up to over 30°C as the sun broke through the clouds during the day. 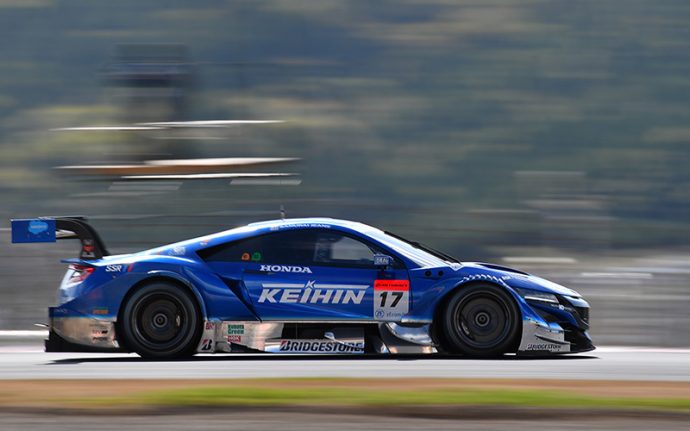 In Q1, the mid-engined Hondas showed they were the cars to beat around the technical, undulating Autopolis circuit. Koudai Tsukakoshi in the #17 Keihin NSX-GT, which entered this weekend fourth in the GT500 championship tables, led the first stage of qualifying with a 1’32.650, ahead of Izawa in the #8 ARTA NSX-GT in second, who recorded the fastest time in morning practice.

The top four cars in the session, including Ryo Hirakawa in the #1 KeePer TOM’s Lexus LC500 and Bertrand Baguette in the #64 Epson Modulo NSX-GT, eclipsed the previous GT500 course record in the first phase of qualifying – and there was still more pace to be found as the track conditions improved.

But the big surprise of qualifying was the struggles for Nissan, who have won more races at Autopolis than any other GT500 manufacturer. All four GT-Rs exited in Q1, led by the #12 Calsonic Impul GT-R (Daiki Sasaki/Jann Mardenborough) in 11th. The #23 Motul Autech NISMO GT-R (Tsugio Matsuda/Ronnie Quintarelli), which is 6th in the championship standings, qualified well down in 14th.

Two other championship-contending Lexus, the #6 Wako’s 4CR LC500 (Kazuya Oshima/Felix Rosenqvist), and the #39 Denso Kobelco SARD LC500 (Heikki Kovalainen/Kamui Kobayashi), will start down in 9th and 12th respectively after missing the top 8 in Q1. 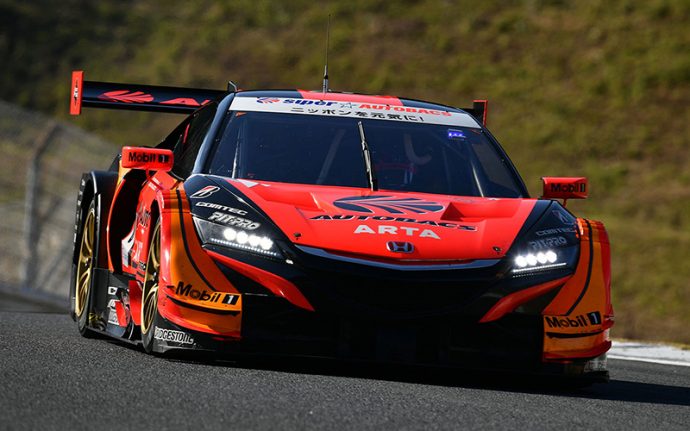 When it came time for Q2, all five of the Honda NSX-GTs and in particular, the three Bridgestone-clad NSXes that lie first, second, and fourth in the championship, were expected to be the favourites to go to P1.

In the final two minutes, Takashi Kogure took the #17 Keihin NSX-GT and recorded the first sub-1’32 lap in a GT500 car, taking provisional pole position with a 1’31.989. But that time would not stand.

Nojiri, who recorded the fastest-ever GT500 lap around Suzuka in May when he took pole position for ARTA, also shattered the old GT500 lap record around Autopolis, and sealed pole position for he and Izawa with a record lap of 1’31.441, put into perspective, only 4 seconds slower than the fastest-ever prototype sports car around this same Autopolis layout, recorded by Teo Fabi in a Jaguar XJR-14 for the 1991 Sportscar World Championship finale.

“In the morning free practice, Izawa-san had recorded the fastest time and shown that the condition of the car was really good,” said Nojiri after qualifying. “In the afternoon’s Q1 session he had also run a fast time (2nd) to get us into Q2.” 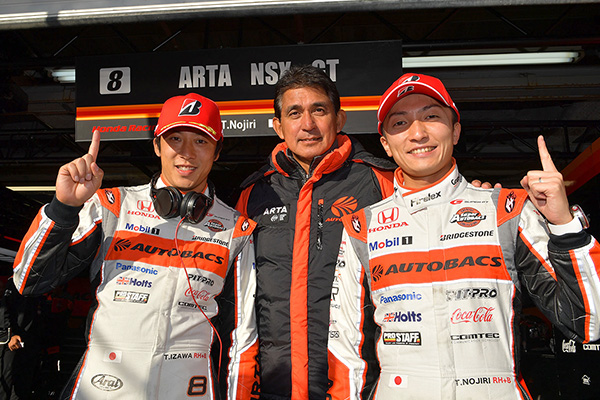 “What’s more, he also gave us some good information for adjusting the car’s settings further to add the final touch,” he laughed. “Of course, I am thankful to the team also for preparing the car so well.” This is Nojiri’s fourth career Super GT pole position, his second of 2018, making him the first repeat pole winner of the year in GT500.

It is Honda’s fifth pole of the 2018 season in seven races, and with the Keihin NSX of Tsukakoshi & Kogure holding onto 2nd position at the end of Q2, it’s Honda’s fourth front-row lockout of the 2018 season as well – reinforcing their massive upward trajectory since the launch of the revamped NSX-GT.

The #100 Raybrig NSX-GT of Yamamoto & Button did well enough despite carrying 44 kilos of Success Ballast plus a “Level 1” fuel-flow limiter, Button, just past the 9th anniversary of his 2009 Formula 1 World Championship coronation, was 5th in Q1, and Yamamoto, last year’s Autopolis pole winner, put them 3rd on the grid tomorrow.

To clinch the GT500 Drivers’ Championship before the final race of the season – which has happened only twice in the last 24 seasons, the Raybrig NSX will need to win, with the ARTA NSX finishing fourth or lower, and the #1 KeePer TOM’s LC500 (Ryo Hirakawa/Nick Cassidy) finishing third or lower.

The two TOM’s LC500s qualified fourth and fifth, led by last year’s Autopolis race-winning car, the #36 au TOM’s LC500 (Kazuki Nakajima/Yuhi Sekiguchi), ahead of the #1 KeePer LC500 of Hirakawa & Cassidy. This means that the top five teams in the championship occupy the top five places on the grid for tomorrow’s 65-lap race!

In the GT300 class, the #25 Hoppy Toyota 86 MC of Takamitsu Matsui and Sho Tsuboi picked up a critical pole position and bonus point to boost their title chances, their second pole position in the last three races. 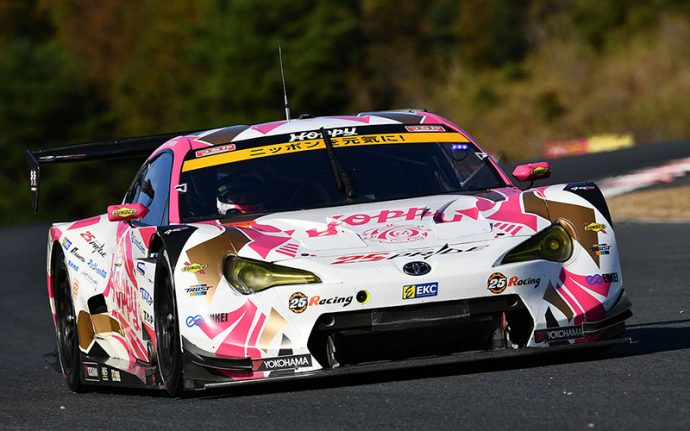 The big shock of Q1 was the championship-leading #55 ARTA BMW M6 GT3 (Shinichi Takagi/Sean Walkinshaw) missing the cut by a wide margin, down in 22nd. Walkinshaw was on a lap quick enough to get them over the cut line, but it was annulled by a red flag when the #22 R’Qs Mercedes-AMG GT3 of Hisashi Wada spun on a flying lap.

The #31 Toyota Prius apr GT (Koki Saga/Kohei Hirate) was caught out in a similar fashion on their flying lap, and will start all the way down in 28th.

19-year-old Ritomo Miyata in the #60 Syntium LM Corsa Lexus RC F GT3 (with Hiroki Yoshimoto) set the fastest time of Q1, a 1’43.542, though Yoshimoto struggled in his Q2 run and could only get them 13th on the grid.

The Hoppy 86 made it into Q2 with relative ease thanks to Matsui’s run in Q1, giving Sho Tsuboi, the newly-crowned, record-breaking All-Japan Formula 3 Champion with 17 wins from 19 races, a chance to put Tsuchiya Engineering on pole at Autopolis for the second straight year. On his flying lap, Tsuboi broke the previous GT300 course record by over a half-second, and went straight to the top of the timing screen with a best lap of 1’42.498. 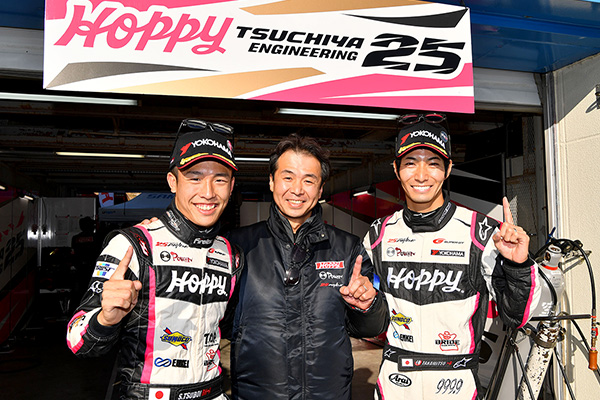 “I think the biggest reason we got this pole position is the way the team tuned the car so perfectly. The car was really great,” said Tsuboi, who recorded his second career GT300 pole.

“All I had to do was bring out that great potential of the car. And, despite the difficult developments in Q1, Matsui-san helped a lot by getting us through Q1. It is a pole position that we won as a team. So, I am grateful to Matsui-san and the entire team.”

This gives Matsui and Tsuboi a bonus point to close their gap to Takagi & Walkinshaw down to 16 points, and its the third time in as many races at Autopolis since the formula was introduced that a Mother Chassis car has taken pole position.

Locals of the southern island of Kyushu highlighted positions two through four on the grid for Sunday’s race. The #10 Gainer TanaX triple a Nissan GT-R GT3 (Kazuki Hoshino/Hiroki Yoshida) qualified second thanks to a great lap from Kumamoto native Yoshida. 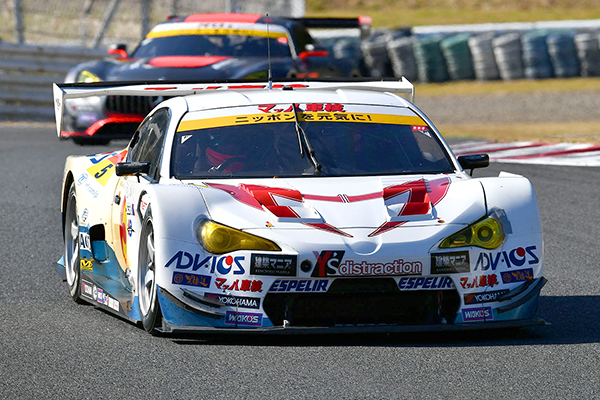 Fukuoka-based Team Mach and the #5 Mach Syaken MC86 Y’s Distraction (Natsu Sakaguchi/Yuya Hiraki) recorded their best starting position of the season in third, and Fukuoka-born Takuto Iguchi put the #61 Subaru BRZ R&D Sport (with Hideki Yamauchi) fourth on the grid, following up on their Sugo victory.

With the top two in the championship relegated well down the order, the #0 Goodsmile Hatsune Miku AMG (Nobuteru Taniguchi/Tatsuya Kataoka) capitalized very well and qualified fifth, ahead of the #52 Saitama Toyopet GreenBrave Toyota Mark X MC (Taku Bamba/Shigekazu Wakisaka), with its best-ever qualifying effort in two seasons in sixth.