The #79 Ligier JS P3 driven by Colin Noble and Alasdair McCaig took the chequered flag with a lead of less than a second over the #32 United Autosports Ligier JS P3 shared by Najaf Husain and Colin Braun after another head-turning performance from Noble in the second half of the race.

The second Ecurie Ecosse / Nielsen Ligier finished third, less than two seconds behind the winning sister car after looking set to make it another 1-2 finish for the team with 10 minutes to go.

The first Norma M30 in the classification was eventually the #30 CD Sport Norma, which ended in fifth position and looked set to nab a podium, before a stop-go penalty for a pit infrigment cost the team dearly in the closing laps.

In GT3, it was a dominant race for the Michelin Le Mans Cup champions: the #8 Kessel Racing Ferrari 488 GT3 shared by Sergio Pianezzola and Giacomo Piccini. That team led the entire race.

The #71 AF Corse Ferrari 488 GT3 driven by Piergiuseppe Perazzini and Marco Ciocci finished second, some fifty two seconds behind the winning car. Andrea Piccini and Claudio Schiavoni in the #77 Kessel Racing Ferrari 488 GT3 grabbed the third spot on the podium.

At the very start of the race, Paul Scheuschner in the #43 Keo Racing Ligier JS P3 span at Turn 1 and was t-boned by the the #40 Graff Norma M30 driven by Adrien Chila. The #43 pitted and retired. This event triggered a short safety car period.

Meanwhile, Jens Petersen in the #3 DKR Engineering Norma M30 led the race ahead of Antonin Borga in the #24 Cool Racing Ligier JSP3 and Tony Wells at the wheel of the #2 Ecurie Ecosse / Nielsen Ligier JS P3, who spent much of his stint being hassled by Alasdair McCaig in the winning Ecurie Ecosse JS P3.

On lap 6, Petersen lost control of his car upon breaking point at Turn 6 and hit Van Uitert. The Ligier bodywork was fine, though the Norma’s front splitter suffered notable damage. From that point on, Petersen gave away third position to Alex Kapadia in the #59 RLR Msport Ligier JSP3, dropped further in the ranks and eventually retired on lap 33.

Kapadia meanwhile drove hard to stay in touch the two leading cars. He even clocked the fastest lap in the race (1:42.470) on lap 21.

Towards the end of the first hour, Borga came under pressure of Van Uitert and lost the lead as both cars lapped the #77 Kessel Racing Ferrari 488 GT3 in turns 12 and 14.

After driver changes, Ross Warburton replaced Alex Kapadia in the #59 and led the race, seven seconds ahead of Jacques Wolff in the #21 DB Autosport Norma M30 and ten seconds ahead John Farano in the #14 RLR MSport. The latter lost time in the pits after mechanics performed bodywork repairs.

On Lap 37, race leader changed again as Wolff overtook Warburton and pulled away easily. Moments later, Laurents Horr in the #30 CD Sport Norma M30 raised to second position after overtaking John Farano and Ross Warburton. Horr closed down on Wolff at a pace of one to three seconds a lap but received a stop and go penalty for pit stop infringement. It was a real disappointment for a car which was a serious contender for the overall win despite a start from the last on the grid.

With 20 minutes to go, Wolff led with a gap eight seconds over the two Ecurie Ecosse Ligiers. The #79 driven by Colin Noble and the #2 driven by James Littlejohn closed in fast and on Lap 57 at Turn 6, both cars overtook Wolff. Moments later, Colin Braun in the #4 United Autosport Ligier JSP3 and Dino Lunardi in the 98 Motorsport98 Ligier JS P3 overtook him as well and started chasing the two leading pair.

The top four cars were all within a second with two laps to go. Noble kept the lead until the chequered flag while Littlejohn lost his second place to Braun in the final lap. Lunardi finished in fourth position.

“I had to deal with a flat spot for most of my stint, which got worse by the end,” said Noble. “So I just took it easy at the corners I knew I couldn’t be overtaken at to ensure I could still take the win. It’s a great result for Alasdair and myself, two wins in a row, and finishing second in the championship is a great achievement.” 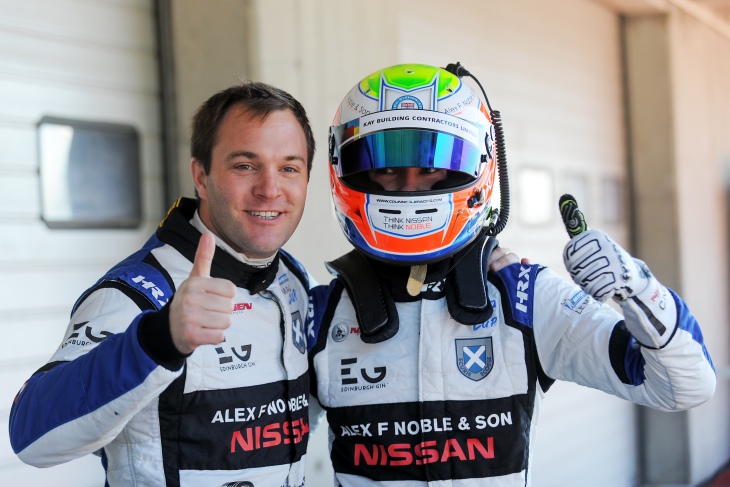 Gostner rapidly took third position and gradually build a reasonable gap with Venerosi. That order remained unchanged until the very last moments of the race when the #77 Kessel Racing Ferrari 488 GTE driven by Andrea Piccini overtook the #83.