One of the most popular challengers in the GT300 class of the Autobacs Super GT Series will take part in its final race this weekend at the Motegi GT 250km Race “Grand Final” at Twin Ring Motegi.

The mid-engined, hybrid-V8 powered Toyota Prius apr GT will take part in its very last race this Sunday, with the #31 Prius of Koki Saga and Kohei Hirate alongside the #30 Prius of Hiroaki Nagai and Manabu Orido farewelling apr Racing’s beloved machine which has competed since the start of 2012.

Moreover, it also means that apr Racing’s lineage of building mid-engined JAF-GT300 cars will also come to an end after twenty years. 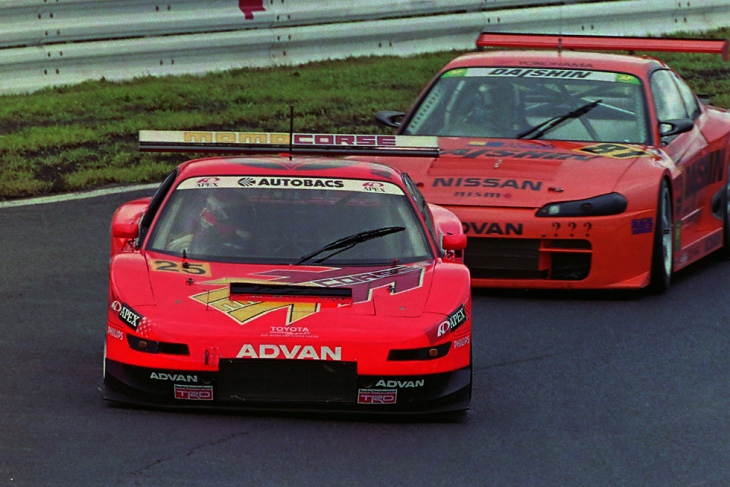 In 1998, the team originally known as A’PEX Racing first debuted in the GT300 class of the All-Japan GT Championship with a Toyota MR2 (SW20) driven by Morio Nitta and Peter Dumbreck.

In 1999, A’PEX partnered with defending GT300 champions Tsuchiya Engineering – who were also successful with the SW20 MR2, and Nitta, alongside first-year co-driver Shinichi Takagi, won the championship. The duo would win it again in 2002, with A’PEX fielding the latest challenger based on the “W30” Toyota MR-S in collaboration with Autobacs Racing Team Aguri. 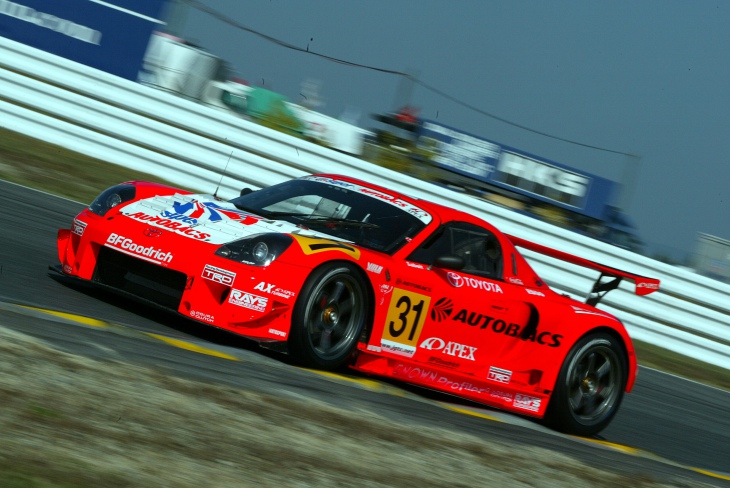 The W30 MR-S won two more championships, in 2005 with Kota Sasaki and Tetsuya Yamano, and again in 2007, with the young duo of Kazuya Oshima and Hiroaki Ishiura. By this point, the team came to be known as apr Racing, while the MR-S had long ceased production. Upon the same successful mid-engined platform, the body was changed to a silhouette of the Toyota Corolla Axio in 2009.

But in 2012, apr Racing unveiled a game-changer when they launched the Prius GT at the Tokyo Auto Salon. 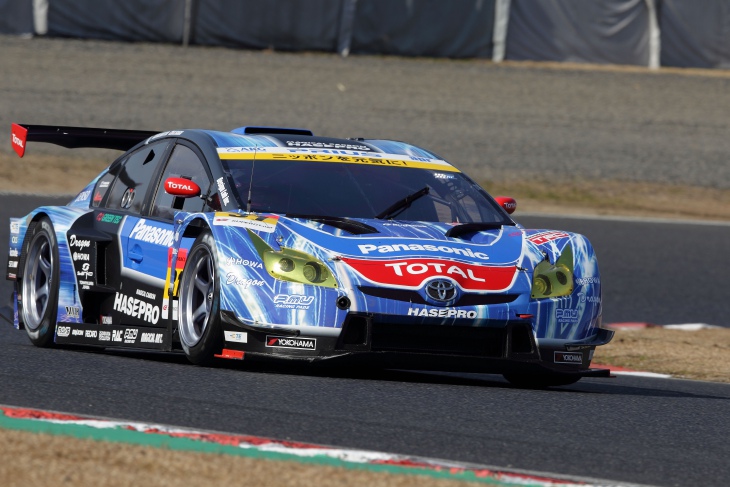 Seated behind the cockpit was Toyota’s top-of-the-line internal combustion racing engine, the RV8K. The 3.4 litre V8 engine powered Toyota’s fleet of Lexus SC GT500 cars, their cars from the Formula Nippon (Super Formula) Championship, and most notably of all, the new Toyota TS030 Hybrid LMP1 and the Lola B10/60 for LMP1 privateers Rebellion Racing.

The RV8K engine in the Prius was detuned to 300ps, but the awesome potential of the car was unlocked with a hybrid powertrain derived from parts found in the road-going Toyota Prius, Toyota Aqua, and Toyota Camry Hybrid – adding up to an extra 150 horsepower at its peak for additional acceleration to top speed.

The first year for the Prius was difficult, as the team went through reliability pains through the first five races. In the sixth race at Fuji Speedway, Saga and Nitta drove the Prius to its first podium finish – a second place at the 300km race. 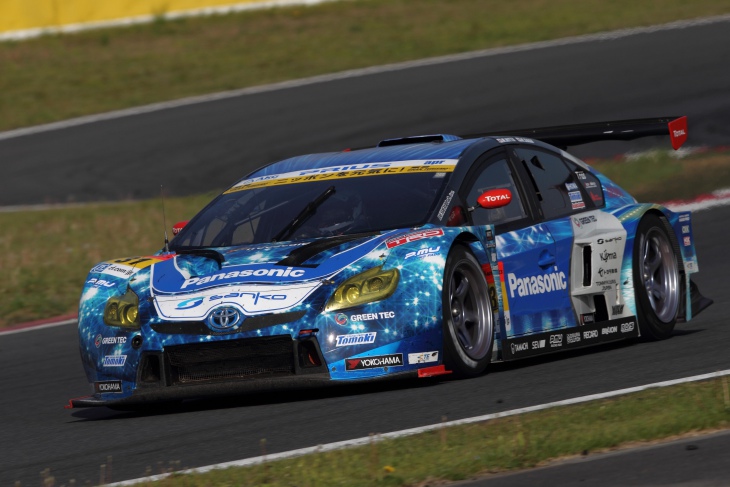 For the second year, the Prius GT’s hybrid powertrain changed over from a lithium-ion battery driven system, to a super capacitor-driven hybrid powertrain that could be used in all races – including the flyaway rounds in Sepang and Buriram.

This crucial improvement had the Prius car on the cusp of its first victory come 2013. And at the Fuji 500 Kilometer Race on Golden Week, Morio Nitta and Koki Saga drove back from an early spin to take the lead with 8 laps to go and score the Prius’ first Super GT victory – and the first win for a hybrid car in Super GT history. They’d pick up another 2nd place in the 300km race at Fuji in September.

Japanese-constructed Hybrids were the talk of the GT300 class in 2013, but the Prius continued to suffer from reliability issues that took them out of title contention. Instead, it was the Honda CR-Z GT of Team Mugen that went on to win the championship, with a 100 percent points scoring rate in eight races (plus the one-off Asian Le Mans Series round at Fuji, the only non-Super GT race to ever count for Super GT championship points).

Three retirements in the first four races doomed the Prius’ title challenge once again in 2014, but they were able to get two more podium finishes, including a second-place finish at the Suzuka 1000km, and at the 250km season finale at Twin Ring Motegi. 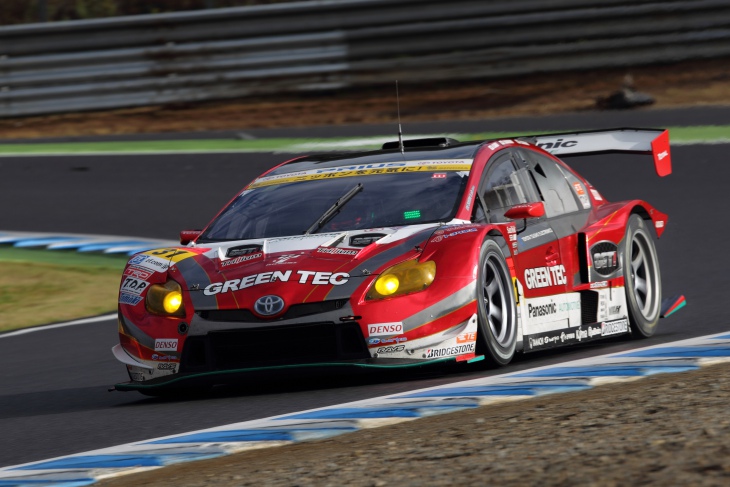 For 2015, things changed up a bit with the switch from Yokohama to Bridgestone tyres, and after two spot starts in the Suzuka 1000km, Toyota Young Driver Program (TDP) prospect Yuichi Nakayama was given a full-time ride in the Prius alongside Saga.

The Prius made good on its potential by winning the opening round of the 2015 season at Okayama International Circuit in dominant fashion, and then winning pole for the Fuji 500km, and battling for a podium place before a late spin dropped them to fourth.

And by this point, the reliability issues that plagued the Prius through its first three seasons were ironed out. For the first time, the Prius finished all eight of its races. But a nightmare of a race at the penultimate round at Autopolis would ultimately cost them the championship, as the Gainer TanaX Nissan GT-R GT3 of André Couto would win the Series Championship with a round in hand.

2015 ended with a dominant pole-to-checkers victory for Saga and Nakayama at Motegi, enough for them to finish 2nd in the GT300 Teams’ Championship, and for their drivers to finish a joint-third behind champion Couto and vice-champion Katsumasa Chiyo, who missed two rounds due to his Blancpain GT Series commitments.

Shortly after the race, apr Racing confirmed rumours that the current Prius GT was to be retired from competition at the end of the season.

For one, new GT300 regulations decreed that any new cars registered for competition from 2016 must have the engine mounted in the same position as its road-going base model. Second, the RV8K was already phased out as Toyota’s GT500 and Super Formula engine with the introduction of the new two-litre, turbocharged, four-cylinder Nippon Race Engine (NRE) platform, and come 2016, Toyota’s new TS050 would have a V6 internal combustion engine instead of a V8.

But Hiroto Kaneso, director and owner of apr Racing, decreed that “As long as Toyota builds hybrids, we will race hybrids in GT300.” 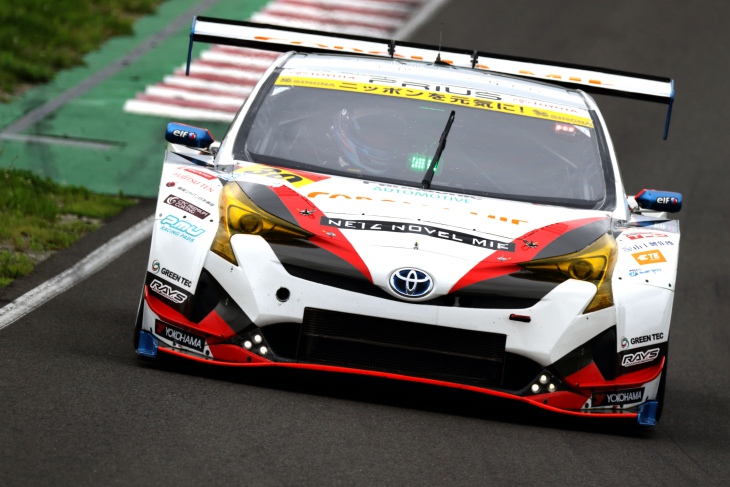 For 2016, not only was the Prius GT not retired from competition, but apr Racing built a second chassis for gentleman driver Hiroaki Nagai and the returning Kota Sasaki, using the old lithium-ion hybrid system of the 2012 Prius GT. That car would race alongside the #31 Prius of all-pros Saga and Nakayama, running the supercapacitor hybrid and Bridgestone tyres.

The new Prius GTs were based on the new fourth-generation XW50 Prius body style, and crucially, were registered for competition on 30 December 2015 – two days before the start of the new year, and the day that the new drivetrain regulations for JAF-GT300 cars was to kick in.

The Honda CR-Z GTs may have retired from Super GT, but the Prius GT still enjoyed success against the FIA GT3s and the new Mother Chassis runners. The #31 Prius of Saga and Nakayama won at Sportsland Sugo, and picked up a 2nd place finish in the Suzuka 1000km. But after two early non-scoring finishes, and mechanical trouble in the Fuji 300km and the first race of the Motegi GT Grand Final double-header, a second-place finish in the second race at Motegi would not be enough to win them the championship.

Tsuchiya Engineering’s Toyota 86 MC of Takeshi Tsuchiya and Takamitsu Matsui won the GT300 title, with Saga and Nakayama finishing 2nd behind them, the best-ever result for the Prius GT. 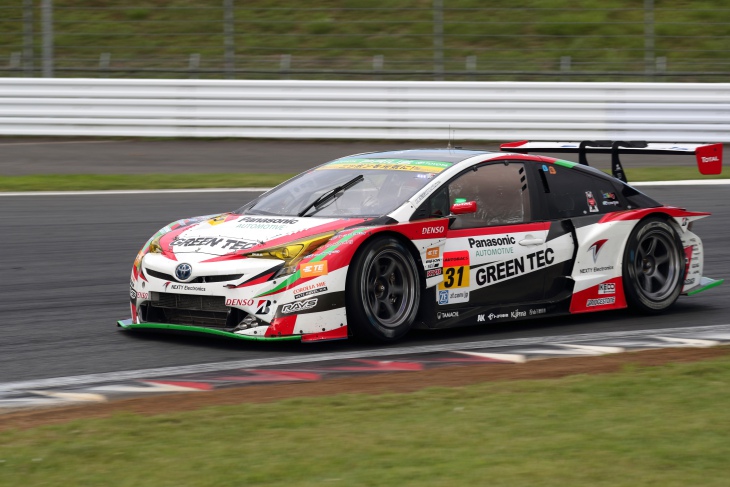 Yuichi Nakayama was moved to the new Lexus RC F GT3 of LM Corsa/INGING Motorsport for 2017, so sophomore driver Rintaro Kubo took over alongside Saga in the #31 car. They finished 3rd in the Fuji 300km – but for the first time since 2012, the Prius failed to win a race. Two crash-induced DNFs and three non-scoring finishes relegated Saga & Kubo down to 15th place in the standings.

Another shakeup came around for 2018. This time, the two Prius GTs now had the supercapacitor hybrid system installed. Hiroaki Nagai and Kota Sasaki (later replaced from Round 5 by two-time GT300 Champion and drift superstar Manabu Orido) remained in the #30 car, but Saga’s new teammate in the #31 was two-time GT500 champion Kohei Hirate, who was moved out of a stacked GT500 fleet.

The season started poorly with a driveline failure at Okayama, but then Saga & Hirate drove on to three podium finishes in the next 4 races, including a drive from 14th to 2nd at Buriram, and a 2nd and 3rd at the two long-distance races at Fuji, where the Prius has always historically fared well. Hirate also led the Prius from 21st to 9th at Suzuka, and from a pit lane start to 10th at Autopolis, demonstrating his value to the team in little time at all. 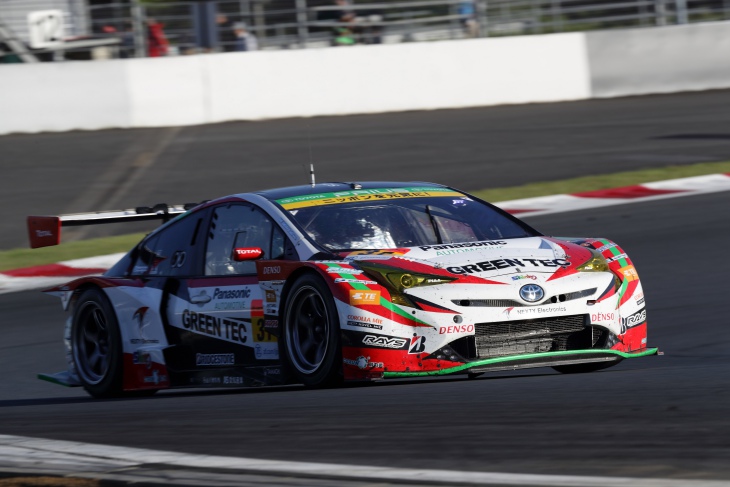 With Saga and Hirate still mathematically eligible for the GT300 Drivers’ Championship going into the final race of the season at Twin Ring Motegi, the mid-engined Toyota Prius apr GT will be retired at seasons’ end.

A reworking of the GT300 engine positioning rules will forbid the Prius from using its midship layout from 2019, and as replacement parts become scarcer, the RV8K engine that had been in action for nearly a decade will bow out at the end of the season.

What happens, then, for 2019? Some speculation pointed towards the new Mark V Toyota Supra taking its place, or even a conceptual successor to the MR2 – but it seems as if those aren’t entirely on the money.

Remember Hiroto Kaneso’s words when the first-generation Prius GT was retired: “As long as Toyota builds hybrid cars, we will continue to race hybrids in GT300.” 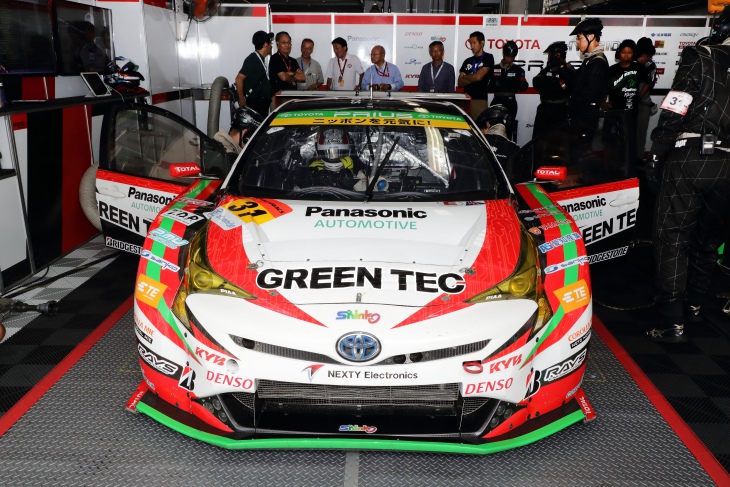 Super GT on NISMO TV lead commentator Sam Collins has been to Japan in recent months in between his many endeavors in public office and motorsport, and writes in an article in the December 2018 issue of Racecar Engineering that apr Racing’s new challenger for the 2019 Super GT Series will be based upon…a Toyota Prius!

The latest information available is that apr will build a new Prius GT, this one with a front-engined layout, and the supercapacitor hybrid still partnered to a V8 engine, but now it would be a 5.4 litre V8 sourced from the Lexus RC F GT3.

So there is good news for fans of the Toyota Prius apr GT, the ultimate example of a racing car that so brazenly defies the conventions of the civilian automobile upon which it is based, that a new version of the car is expected to be built in apr Racing’s understated garage in the town of Atsugi, 45 kilometers west of Yokohama, in preparation for a potential launch at the 2019 Tokyo Auto Salon – seven years after the launch of the original Prius GT.

But with that, it also means that apr Racing’s lineage of building ultra-fast, mid-engined GT300 cars dating back to the championship-winning MR2s of yesteryear is over.

All that leaves now is to tie up one loose end that’s been hanging around for many a Super GT race broadcast, this directly from Toyota Motor Corporation in February 2011, who left to a public vote to decide the official plural designation of “Prius” – and with 25 percent of the vote, the decision was made:

“Prii becomes the word not only endorsed by the public who chose it, but also as the term recognized by Toyota.”