Toyota Gazoo Racing scored a comfortable 1-2 finish in the 2018 running of the 6 Hours of Shanghai today. The #7 TS050 HYBRID of Mike Conway, Kamui Kobayashi and Jose Maria Lopez led home the #8, in a race which will be remembered for the poor weather conditions that forced the red flags out for much of the first half.

The weather front moved in early in the morning before the race began, and worsened in the build-up with the rain shower getting heavier. The race started under safety car, and with such low visibility was quickly red-flagged after the #3 Rebellion R-13 had an off into the barriers due to the standing water.

The race did get going later for a handful of laps, but a second red flag came out as the rain continued. Eventually, it went green for a second time with just over three hours to go, and from there, the track began to dry as the level of rain decreased.

There was another safety car during the fourth hour, due to the ByKolles CLM catching fire on the pit straight and DragonSpeed’s BR1 getting beached in the gravel, but after that, the race really got underway, and ran mainly green until the end, though a late shower and safety car added to the drama. 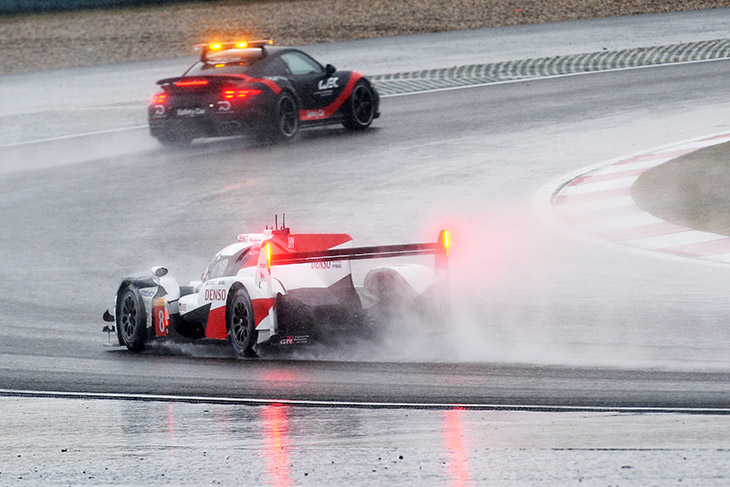 “I think we started behind car eight, we expected it would be a hard one, and obviously during the safety cars there was so much rain,” Kobayashi said. “I had no visibility and couldn’t take risks. I tried to catch up but we lost time to the eight during my stint, but we had a safety car which helped us manage the gap. The car felt good, and I handed over to Mike to finish it off. The team did a grea job.”

Behind Toyota, SMP and Rebellion duked it out for the final podium spot, the Russian outfit coming out on top this time, as the BR1 proved to be the better chassis in the wet weather en route to its first podium.

The #11 BR1 of Jenson Button, Vitaly Petrov and Mikhail Aleshin took third, a lap down on the Toyotas. Unfortunately, the sister car’s day wasn’t as positive, as Matevos Issakyan had a big off in the final 20 minutes with the rain coming down, bringing out a late safety car.

“It was a tough old day for everyone, I think the red flags and safety cars were necessary as these cars don’t run in those conditions,” Button said. “It was a really good call, the first green flag I was surprised at, but we got racing.

“It was good fun and we were fighting with the Rebellions, but we could do nothing about the Toyotas with their four-wheel drive systems. But we pushed as hard as we could and only finished a lap down. For us it wasn’t too bad a day at all, no major issues aside from a drive-through and a spin.”

The #1 Rebellion R-13 finished fourth, ahead of the recovering #3 chassis. Andre Lotterer had a chance to catch and pass Petrov to take third after the final restart, but he couldn’t keep up with Petrov as the conditions deteriorated in the final 10 minutes.

GTE Pro meanwhile, saw a huge result for the Aston Martin Racing team, its new Vantage AMR scoring its first-ever victory. Nicki Thiim and Marco Sorensen were masterful in the tricky conditions, Thiim storming through the field from fourth in the fifth hour after the safety car for the ByKolles fire to take control of the race. 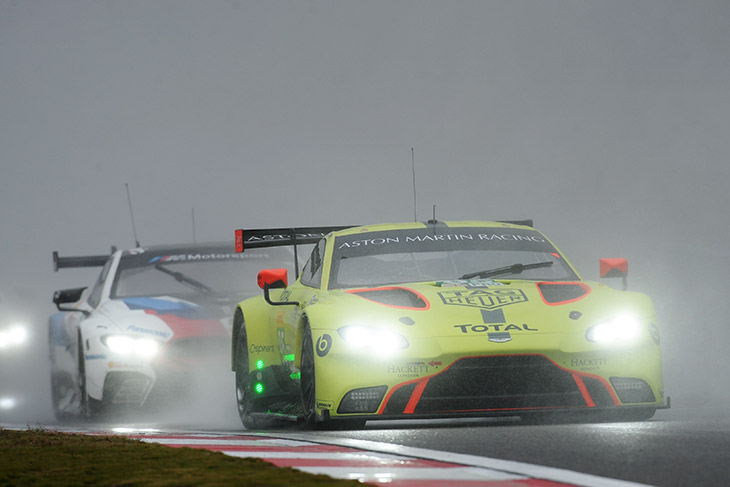 “In the end it was just surviving after the safety car, everything you knew about driving couldn’t help you as you were sliding around the whole time,” Sorensen said. “The whole stint at the end I just kept asking: “When is the last lap? When is the last lap?”

“We just did a good job tactically, we made good strategy calls under safety cars and split the strategy on both cars,” Thiim added.

Behind, Richard Lietz steered the #91 Porsche to second, after getting past a struggling Tom Blomqvist in the #82 BMW, Davide Rigon’s #71 Ferrari and Alex Lynn’s #97 Aston Martin (which came fourth) during his stint.

The championship-leading #92 Porsche finished third, Michael Christensen muscling his way past Maxime Martin in the #97 Aston in the dash to the flag after the final safety car period. The best of the AF Corse Ferrari’s – the #51 – came home fifth.

BMW was in the fight when the race got going, but faded away as the final hours approached, the #82 falling from the podium places outside the top 10, while the #81 crossed the line sixth.

Ford also had a race to forget, the #66 which started from pole unable to recover from contact with the #92 Porsche during the first green flag sequence of the race. Kevin Estre tagged Olivier Pla going through Turn 1, sending the Ford into a spin; no blame was placed on either driver though, and there was no penalty handed out for the incident.

The #67 meanwhile, had an off into the gravel during Andy Priaulx’s time in the car, which set himself and Harry Tincknell back considerably. The car was classified seventh.

In LMP2, the #38 Jackie Chan DC Racing ORECA crew of Stephane Richelmi, Gabriel Aubrey and Ho Pin Tung earned their third win of the season, with a strong run while the other runners in the class hit trouble or struggled in the conditions. 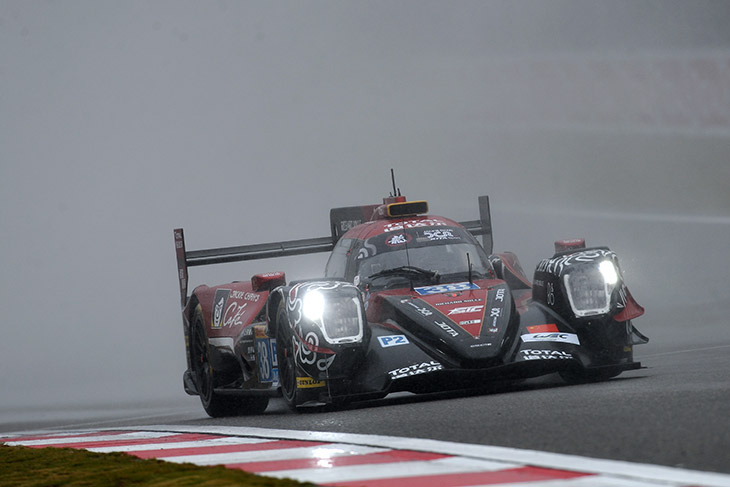 It was by no means an easy ride for the winners though, as the team put the car on intermediate tyres too early, causing Aubrey to drive cautiously. The car had multiple offs in the race, but was quick and consistent when it mattered.

“I think everyone did an outstanding job,” said a jubilant Ho Pin Tung. “Five years ago David (Cheng) and I started this journey together, since then we’ve won Le Mans, and finally we managed to crack winning the home race in very difficult circumstances and conditions.

“We’ve always had such a fast car and excellent strategy, and that stood out today. We suffered with poor visibility minor car issues, like the gear shifts, but we nursed the car home and took the win.”

Aubrey added: “There were so many scares. It was an emotional rollercoaster. We had a trip to the gravel, contact with an LMP1 and I was on inters in the full rain, so I was so happy to see the chequered flag at the end!”

DragonSpeed’s #31 ORECA, which led the class for a good portion of the second half of the race finished second, leading the Signatech Alpine which came home third after the TDS Racing ORECA was forced to pit on the final lap.

With that result, the #38 now has a clear lead in the championship over Signatech Alpine. Heading into the race, the two crews were tied.

Also notable, was the where the winning crew finished in the overall classification. The LMP2s were at times, no match for the GTE Pro cars when the conditions were at their worst. The #95 Aston Martin which won GTE Pro, as a result, finished above the #38 JCDC ORECA in the overall result.

Dempsey Proton victorious in the shadow of post-Fuji sanctions

In GTE Am, it was a win for Dempsey Proton Racing, which is fresh from losing all its ‘Super Season’ points following yesterday’s Steward’s Decisions concerning the investigation into data tampering after the Fuji race. 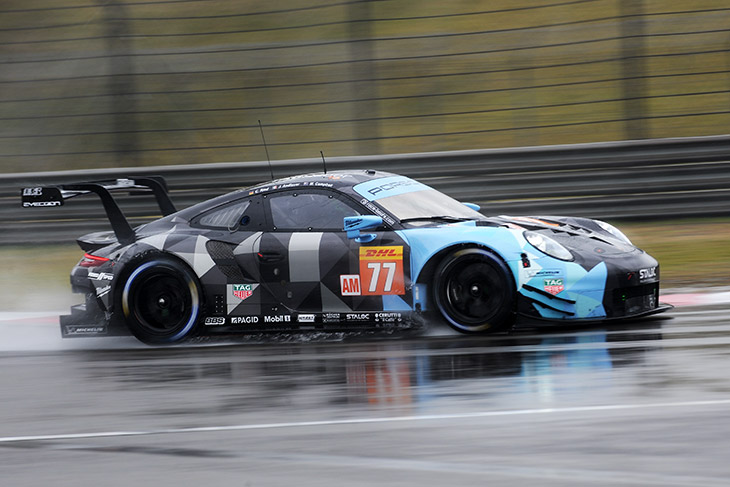 The #77 (which led the championship until yesterday) won the race, leading home the Project 1 Porsche, which now leads the Am class championship race. The #88 Dempsey Proton Porsche completed the podium, losing second at the very end.

“I’m really happy to win this race after a difficult weekend,” said Christian Ried. “I’m really happy for everyone, they did a great job. It was so hard, I did the start, we chose the wrong tyres so I struggled. But Julien and Matt did so well to recover.”

Unfortunately, it must be noted that Clearwater Racing’s day didn’t pan out as hoped.

At one point during Matt Griffin’s stint after the final red flag the crew had a huge lead, but faded throguh the final hours and came home seventh Not the result Weng Sun Mok would have hoped for in his final WEC race, that won’t put a dampener on team spirits though, as it celebrates and reflects on a remarkable run with Mok over the past decade.