Black Falcon and Craft-Bamboo Racing have announced that they will team up for the 2019 Bathurst 12 Hour next February, for an effort running a single Mercedes-AMG GT3 entry with an all-Mercedes-AMG factory line-up consisting of Maro Engel and Luca Stolz alongside 2018 DTM champion Gary Paffett.

It is a strategic decision to form this partnership, which brings the strengths of both teams together for this event. This comes shortly after Craft Bamboo announced its switch from racing with Porsche to Mercedes for 2019.

“The partnership with Craft-Bamboo Racing is a great opportunity to unite our teams’ strengths and return to the Bathurst 12 hrs after many years. Our driver line-up is really strong and we’re looking forward to a hard fight for the victory at one of the biggest endurance races in the calendar,” said Sean Paul Breslin, Black Falcon team principal.

Darryl O’Young, Director of Craft-Bamboo Racing added: “When the idea came from Sean Paul to make a joint effort for this event, it made a lot of sense for us.

“In Asia we have limited opportunity to test with logistics and track time availability, so we believe this partnership will fast track knowledge for our engineers and team about the car ahead of our debut season with the Mercedes-AMG GT3. Bathurst 12 hours is a very unique race, one which we are very familiar with and have delivered results.

“I am confident this joint effort will be a great first event for us with Mercedes-AMG, especially with the strong driver line-up in the car.”

Riley Motorsports, is expanding its operations for the 2019 season, announcing a Michelin Pilot Challenge programme with Mercedes in the GS class.

The North Carolina-based team will debut a Mercedes-AMG GT4 in the Pilot Challenge Grand Sport (GS) class with Dylan Murry and James Cox.

Owner Bill Riley sees an IMSA Michelin Pilot Challenge programme as the next logical step for his team.

“I’ve definitely always liked that series,” said Riley at the Michelin on-track opportunity in Daytona last week. “We built the Camaros in the past for it for GS and I’ve always wanted to run a car there. I tried really hard last year to run a team there, but it didn’t work out. I was very close.”

“But this year, the opportunity to work with Jim Cox and Dylan Murry came up and really seems to be working quite well altogether right off the bat. And obviously picking AMG was one of our choices and the AMG car so far today, I have to say was flawless.”

Cox and Murry were both on hand for the Michelin on-track opportunity and have prior experience co-driving in the Michelin Pilot Challenge. Murry made his series debut alongside Cox with BGB Motorsports at the season-opener in Daytona this past January and the duo continued for five additional races together throughout the year.

“With Riley Motorsports coming to GT4 with Jim Cox and me, it will be a learning experience for both of us,” explained 18-year-old Murry. “The past test days at the Michelin test went great, but with the experience that Riley has, I can only see us getting better each race.”

Absolute Racing has confirmed that it will race two of Audi’s new-for-2019 R8 LMS GT3 Evos in the re-named Blancpain GT World Challenge Asia series in 2019. 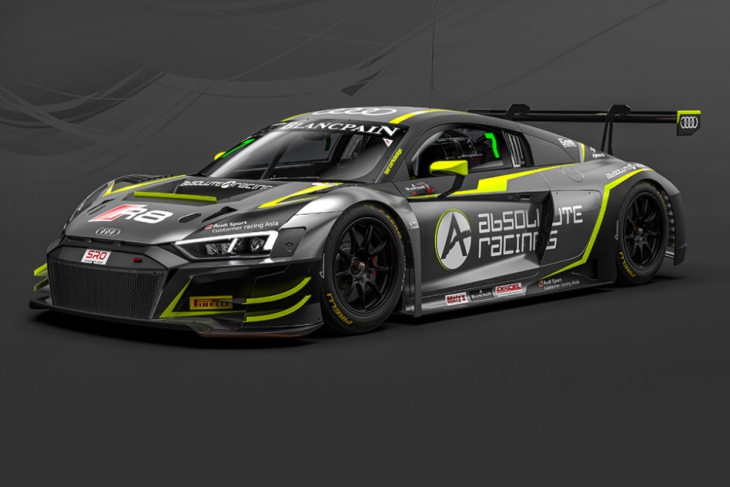 Absolute has confirmed one pairing for this programme, the Pro/Am line-up of Chinese duo Sun Jingzu and Cheng Congfu, who first raced together in 2017 before the latter switched to partnering Martin Rump for a crack at this year’s overall title.

“We are glad that we can confirm at this early stage to be running two cars at least. The Audi R8 LMS’ new Evo package upgrade not only looks exciting but also proved to be a big improvement on the racetrack as the results of early December tests showed. Our goal is clear, to go for the championship title, winning as many races as possible on the way.”

“Absolute Racing is a hugely successful Audi customer team in Asia and we are excited to continue our close partnership into the 2019 season,” added Martin Kuehl, Director of Audi Sport customer racing Asia. “The Pro-Am entry of Cheng Congfu and Sun Jingzu combines one of China’s most acknowledged racers with one of the country’s best privateers. A true Chinese dream team! We wish them all the best for the season.”

Absolute will name its second driver pairing in the new year.

GTO Racing with TTR duo Tony Fong and Brian Lee will compete in GT4 Asia next season with a Mercedes-AMG GT4.

The pair raced together in Blancpain GT Series Asia’s GT4 class in 2018 aboard a TTR-run Porsche but are now switching to the rebranded GT4 Asia championship with a new car and team behind them.

“I am aiming to do my best and respect the team’s expectations,” said Fong. “But I am also keen, with GTO Racing with TTR, to win a race and also become a regular podium finisher alongside Brian who will be a huge asset to the team and I. He is a great guy, as well as a great driver.”

“I am really looking forward to having the opportunity to race for this team with a new car,” added Lee. “We are very determined and motivated. Our target is to continue progressing and fighting together for positions that count. We cannot wait to start working towards achieving great results together.”

Phoenix Racing has announced that it will compete in both the Blancpain Endurance and Sprint Cup championships next year, returning to the top of Blancpain GT racing for the first time since 2016, with Audi R8 LMS GT3 Evos.

Since ’16 the team has focused on GT4 racing with Audi Sport in Europe.

As part of the announcement, the team has revealed that Finlay Hutchison has signed with the outfit for the programme, the 18-year-old coming off a 2018 season racing McLaren GT4 in Europe and the British GT Championship. 2019 will be his first season racing in GT3.

The Blancpain grid continues to build with this news. And significant programmes still to be announced include confirmation of GPX Racing with a 2019 Porsche, and CRS Racing’s known but as yet unannounced Aston Martin programme.