The 4 Hours of Buriram proved to be a very different sort of race from those in China and Japan. It was won, and lost, in the main, with trials and tribulations for several runners rather than wheel to wheel racing. It ended with a third different overall winner in the first three Asian Le Mans Series races of the 2018/19 season.

All the title battles will go to the final round at Sepang next month as a result and whilst every championship leader bar one would (provisionally at least!) extended their points lead – the slings and arrows of the outrageous fortune left the final podium results in doubt right to the flag.

The LMP2 field saw an excellent start from Ate de Jong in the #24 Algarve Pro Racing Ligier Judd, a defensive sweep top the outside for Turn 1 taking Phil Hanson by surprise and allowing the sister #25 LMP2 Am-entered APR Ligier of Chris McMurry to dive through an opening gap for second into Turn 1 – Algarve Pro would run 1-2 with Hanson snapping at the heels of McMurry. 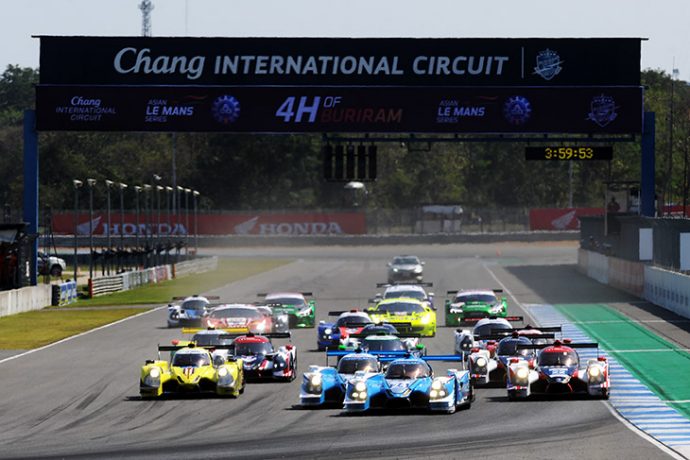 Whilst it would take a couple of laps for Hanson to find a way by the Judd-powered pair there should be significant praise levelled at de Jong in particular, the returning #24 driver starting from pole for the first time ever played it perfectly. And whilst he dropped back after being passed, he handed over the car to Harrison Newey having driven the stint of his life – putting his younger team-mates in a position where a fightback was possible.

Thereafter the race was characterised by the chasing #24 car having better overall pace than the #22 – which would lead to the flag – but the attack would fail after two pieces of bad luck for the team, and one brilliant strategy call from United.

That should take nothing away from an utterly fault-free run from the #22 crew – Phil Hanson again covering off all bar a single stint in the four hours, Di Resta taking his stint in the third hour to allow Hanson some respite from the heat, and whilst the eventual winning margin rather flattered them. The win was deserved not only by the driving pair but by the whole team, the call in to the pits as the race’s only Full-Course Yellow was called was spot on, and reversed the flow of the race at that point which had seen Harrison Newey, having taken over the helm of the #24 from de Jong, scything into Hanson’s advantage.

The pit call though saw the United effort take full advantage, and the lead more than doubled as a result.

Newey, and later Pizzitola, chased hard throughout though but the Frenchman suffered two bits of bad luck, an incident badly called for TV by this writer that looked from our pictures like a terribly judged move into the hairpin that resulted in a substantial impact with the the GT class leading Ferrari was revealed later to have not been Pizzitola’s fault at all, but rather Ferrari driver James Calado’s ill-judged return to the track after going off on the approach to the corner: 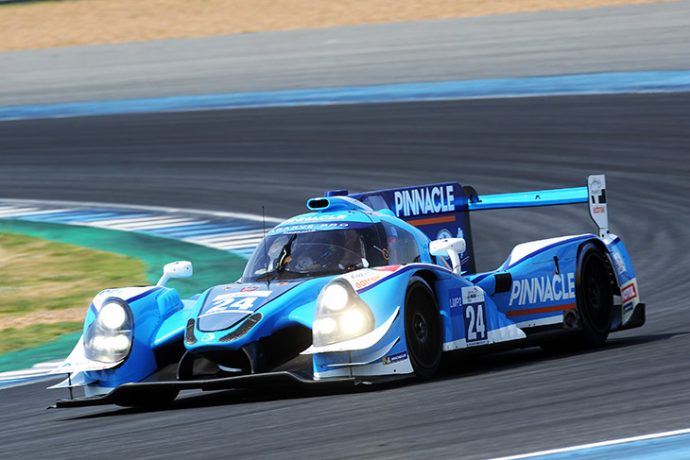 “I thought I had plenty of room to make the pass on the LMP3 car ahead but when I got to the apex the Ferrari was there out of nowhere and I hit him. James came to me before the podium to apologise – one of those things!” said a rueful Pizzitola later.

At that point Pizzitola had looked likely to catch the leader, the delay, plus a late race puncture cost the #24 effort dear though and the effort faded – second would have to be good enough.

Behind there was a fine run to a first Asian podium for the #35 Panis Barthez Competition crew, Jean Baptiste Lahaye and Francois Heriau running well, Matthieu Lahaye adding pace. The effort fell back behind a charging Darren Burke deep into the race, but the podium place would be back with the all-French crew by the flag, and a late splash and dash for Pizzitola meant they would be just 10 seconds back at the flag from second! 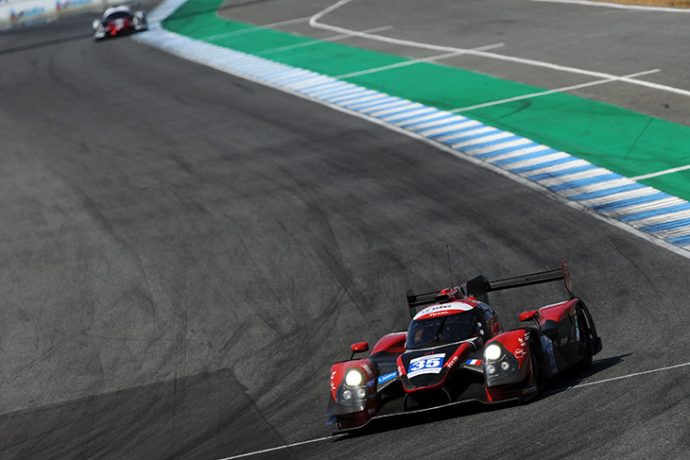 The #4 ARC Bratislava effort would take a second consecutive class victory, and the class championship lead and was oh so close to a second consecutive overall podium, Darren Burke passing the #35 on pace but then suffering a broken spark plug, losing time lap after lap but holding on for fourth to fend off a charge from the recovering #25. Anders Fjordbach was ‘on it’ for a very long stint after early penalties for both Chris McMurry and Mark Patterson. He’d just fall short at the flag by nine seconds after chasing back from almost a lap down to the hobbled #4  .

The #4 crew deserved their class win, Miro Konopka with another faultless stint, Ling Kang again cementing a growing reputation, as was Burke, an emerging star in the Asian Series. 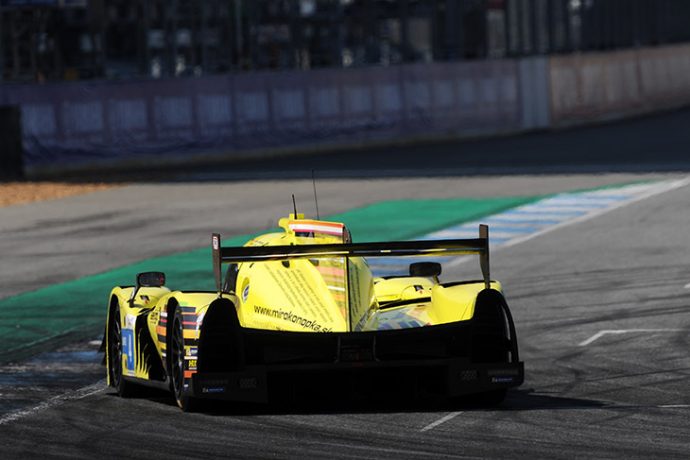 For the #25 it was a story of big consequences for small errors, effectively losing a lap to the tree successive penalties, for contact, and for a pair of pitlane violations. There is pace and potential there though! 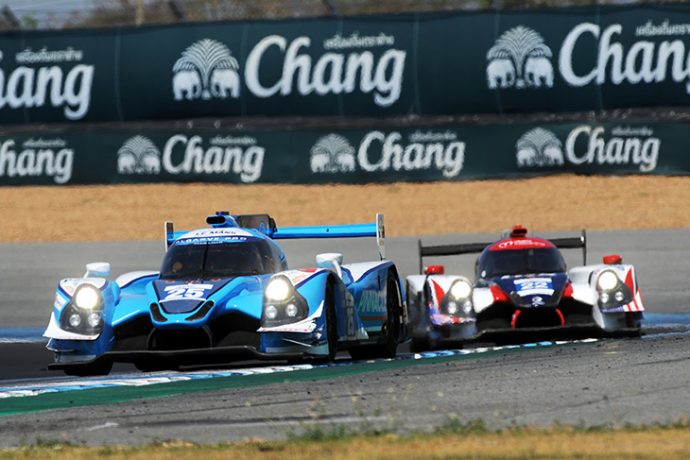 The #23 United Autosports LMP2 Am effort meanwhile was in the mix for a while but struggled for pace, the team opting to garage the car briefly whilst searching for a rogue lambda sensor – they’s finish laps down on the leading pair.

LMP3 saw bad luck for the championship-leading #13 Inter Europol effort, they’d lead the race but fall foul of a call to the pits to fix the left rear legality panel, a repair the team insist was not necessary “Loose not broken”. That cost the team around an extra 90 seconds in the garage in a race they last to the #2 United Ligier by just 24 seconds – aside from that it was another convincing run from the Smiechowski/Hippe combo. 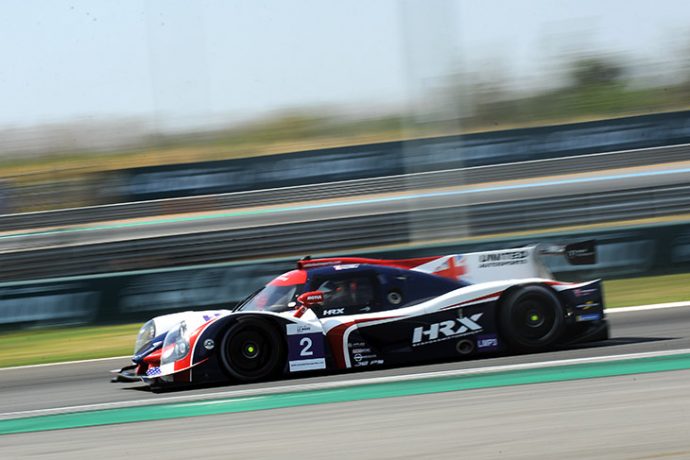 The good news for Inter-Europol was that the ‘wrong’ United Ligier took the win, the #3 falling victim to a broken exhaust and subsequently a resultant broken gearshift that saw Kay van Berlo losing huge chunks of time in the final hour, the car stuck in fourth gear! The #3 would fall from being in overall race contention to 5th in class at the flag, dropping points to the #13 as it did so. 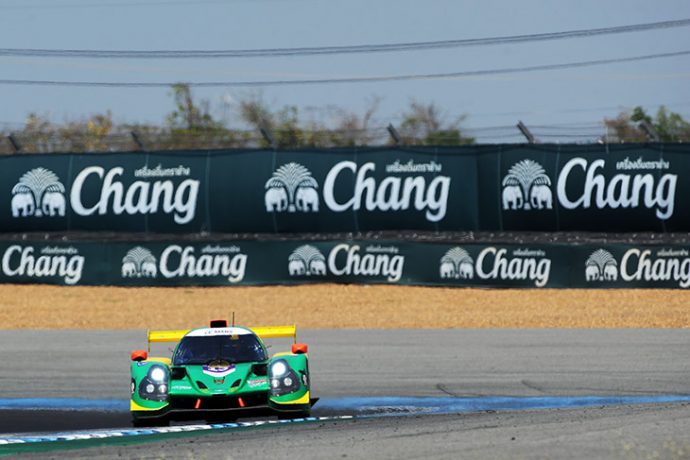 For the #2 it was a strong run to take advantage of the Polish-entered car’s misfortune – Garett Grist started strongly, Chris Buncombe pushed hard to soak up the pressure, and Wayne Boyd delivered the pace that would ensure that a charging Martin Hippe would not get close enough to exert direct pressure – the gap 24 seconds at the flag. 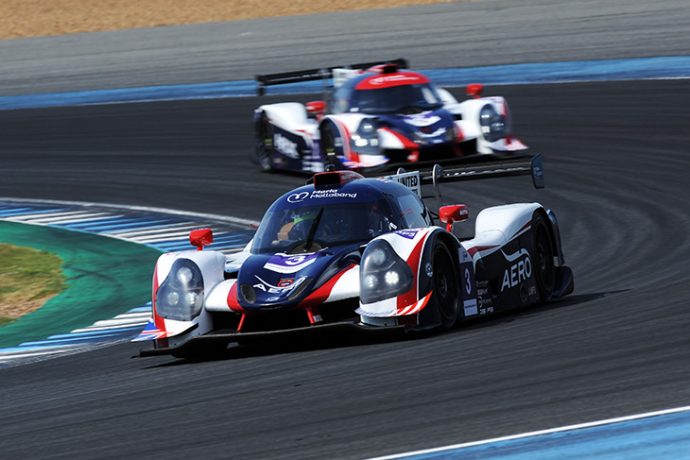 All of that meant that the championship lead stays with the #13 – but by a reduced margin, now eight points, to a new second placed car in the standings, #2 overhauling #3!

Behind that little lot the final podium position was in doubt to the flag, with both of the Ecurie Ecosse / Nielsen racing Ligiers in contention, Christian Olsen having a very strong late race run in the #7 that started from the back after Nick Adcock’s FP2 off meant that they missed qualifying.

Adcock was steady but lacked the pace we’ve seen thus far this season, the pace came at the end of the race from his young Danish team-mate, and problems ahed for the #79 gave Olsen something to chase.   Tony Wells too had a quiet start to the race and Colin Noble was set to do the heavy lifting in the #79.

He was initially catching the #3 United Ligier but the gap stabilised until van Berlo’s woes, Noble quickly getting the message that his prey was wounded and putting him to the metaphoric sword. 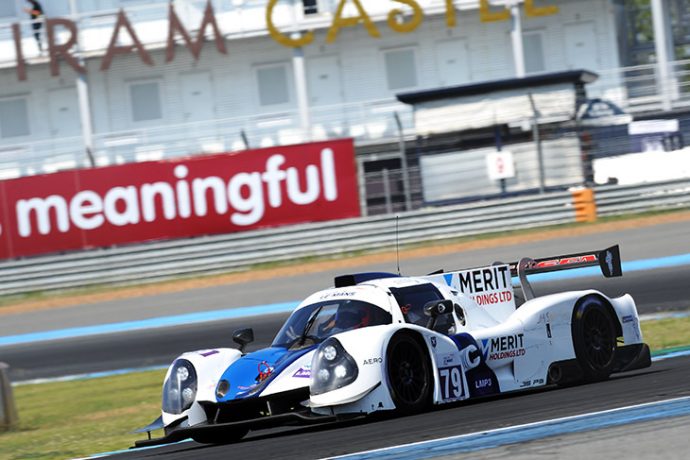 Noble too though would find trouble, believed to be a fuel pick-up issue, and his lap times dropped off alarmingly, now it was Olsen’s turn to smell blood but the team, and Noble, managed the reduced available pace beautifully. The #79 would make the podium, Olsen just two seconds off at the flag!

Behind there was a trio of card that had ups and downs, Eurasia simply didn’t have the pace, but their day would be boosted by an uptick in the form of Nobuya Yamanaka, he’s looking to the future in his LMP3 career – he’ll race beyond Asia in 2019!

Eurasia woud come home 6th in class   The #50 R24 team had a much better day and Stephane Kox enjoyed a couple of close battles, and won a couple too! Teammate Marie Iwaoka though was somewhat further back in the learning curve – they are here to learn though, it will come!

The #65 Viper Niza crew had the best of starts again! Nigel Moore’s now trademark move up the inside of the pack into T1, and then again at T3 saw the black and green JS P3 up into fourth overall for a couple of laps but an early puncture cost the team dear, they struggled thereafter.

GT went the way of the #11 Car Guy crew – after the TianShi Audis led the way early on.

The class saw the only retirement of the race, the #5 TF Sport/ Red River Sport Aston Martin struggling with a power steering issue and then suffering brake failure midway through a Johnny Mowlem stint, the definitely not retired Brit doing great work to scrub of speed through the gravel trap and making only light contact with the barrier – the car got back to the pits but was retired.

With the Gentleman drivers starting all but the #66 Audi the field was relatively easy pickings early on for Max Wiser, he pulled out a sizeable lead through to the first stops.

Thereafter though the pendulum swung back as the #66 welcomed its less experienced, and less pacey drivers, David Chen taking over the wheel of the #88 Audi pushed on but Kei Cozzolino took control in the #11 and handed the car to James Calado in the lead as Jean Karl Vernay took over in the #88 Audi.

Alessandro Pier Guidi pushed hard but would do no better than third in the #51 Ferrari, Pier Guidi’s pole making a telling difference though, it takes the Championship fight to Sepang, the gap 24 points to the unbeaten #11 Ferrari!

With Calado at the wheel and the car in the lead the result should have been in no doubt but, by the World Champion’s own admission, this was far from his best drive. 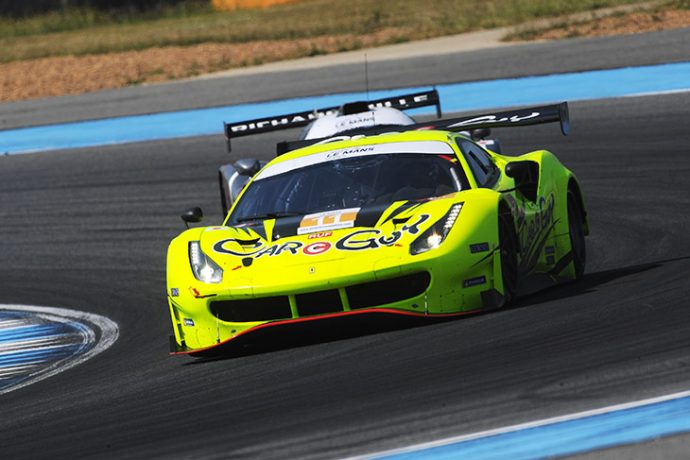 The incident with Pizzitola (see above in the LMP2 section) cost Calado a drive-through and there was a later stop and 10 second hold for crossing the white line at pit exit and a further drive through for another infringement. All of that little lot saw the final gap down to 23 seconds, and, despite the penalties, Calado deserves some credit for the crushing pace he laid down to repair some of the damage, and to see off the challenge from the #88 – though Vernay’s pace was hobbled by gearbox issues throughout his final stint. 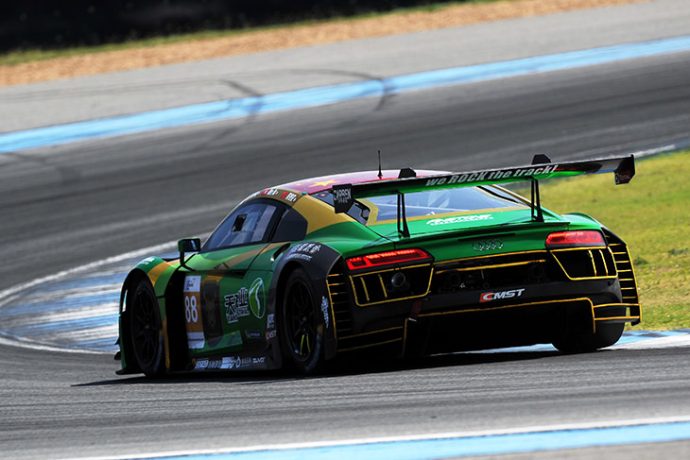 All in all a race defined by issues rather than pace, the nett result though is that every contender in every class will have to wait until the last weekend of February to learn whether they get a championship trophy, and whether they need to put aside a week or two in June for an important additional race!