RACER.com has reported that Mike Conway will be unable to race in the Rolex 24 with Action Express Racing, due to travel problems. The #5 Cadillac DPi V.R will therefore race with just three drivers.

Read the full story with the link above.

MIA to start at the back in MPC race

Motorsports In Action, which qualified second for today’s four-hour the Michelin Pilot Challenge race, will start at the back of the field, its #69 570S GT4 found to be marginally underweight in the session.

So yeah… after an exciting qualifying putting us in P2, we were found to be 0.5kg underweight at tech inspection which will relinquish us to the back of the field for the start of the race. Rules are rules and we take full responsibility for this error. Should make for a very exciting race with @coreyfergusracing starting from the back to make his way though the field before handing the car over to @jesselazareofficial. It’s a 4 hour race and our intent is still to go for the win. Tune-in for what will be a dynamic race!!

The #75 Compass Racing McLaren, which took pole and broke the GS lap record with McLaren Factory Driver Paul Holton driving is still due to start from the front.

There’s set to be fun, games and giveaways! 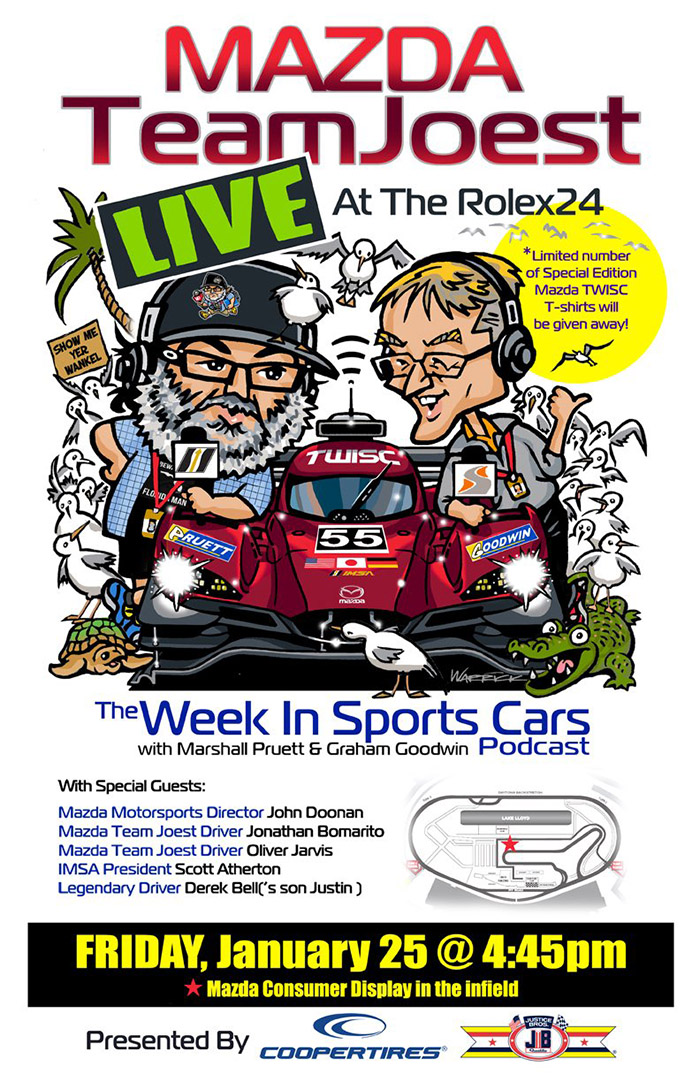 Leigh Diffey and the rest of the NBC broadcast crew for the Rolex 24 at Daytona were present in the media centre to field questions. NBC is taking on the full IMSA season, as well as the full Indycar schedule. “It’s a really big deal for the NBC Sports Group to have the IMSA property. It’s not just a throwaway line that we call ourselves the home of motorsports.” Diffey said. “NBC will have 1,500 hours of coverage of motorsports throughout this year.”

Ensuring that a wider audience can appreciate sports car racing is a factor that Diffey and NBC are taking seriously. “As a viewer, I sometimes found it hard to follow, so it’s a big responsibility to tell that story appropriately.”

NBC will also have NASCAR legend Dale Earnhardt Jr. on hand for coverage this weekend. “It’s a really incredible race, I have some great memories from running it two times, it’s such a different discipline. They have to be careful sending us here because we may have to come out of retirement.”

If Earnhardt Jr. was to come back for another run at the Rolex 24 “it wouldn’t even be about the performance.” He said. “The previous two times I didn’t understand how incredible the event was.” He also expressed his interest in wanting to “take it all in again.”

A.J. Allmendinger meanwhile, will be pulling double-duty this weekend. Driving in the #86 Meyer Shank Racing Acura NSX GT3, and spending time in front of a microphone for NBC. Allmendinger won the 2012 rendition of the race overall driving for Michael Shank Racing.

“It’s unique this weekend running back and forth before the race you usually stand around so they have definitely got my schedule busy. On the Saturday and Sunday schedule, they didn’t write a time where I’m sleeping.”

The effect that the switch to Michelin has been pretty huge already, with lap records falling left, right and centre.

Heading into the Rolex 24 itself, the Daytona lap records have been broken in every class of every series on site, including the overall circuit lap record, broken by Oliver Jarvis and Mazda.

“It’s an exciting time, we have to give special recognition to our parter Michelin, they bring a best in class, leading product,” said IMSA’s Ed Bennett. “It’s great to expand their involvement to where they are the primary supplier.”

IMSA President Scott Atherton added: “Yesterday was a great day to reflect on Dan Gurney’s achievement, it’s taken 26 years to get to this point, I’m pleased we’ve done that, it’s about time. You’ll see more of that in seasons to come. It’s fun to be talking about track records again, we haven’t said that in 26 years here!”

Another organisation breaking records this week is RACER magazine, which released a special edition IMSA 50 edition prior to the event.

Founder Paul Pfanner told DSC that the edition has broken the publication’s revenue record for a single issue, quite something in this day and age, a difficult one for print magazines, and a sure sign that RACER’s committed staff continue to produce work of real quality. 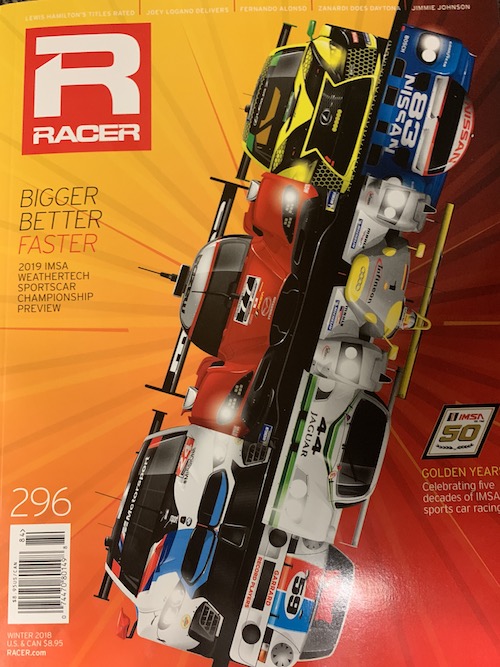 The regular display of historic cars with IMSA heritage is on display in the fan area close to the paddock, most of which will take to the track on race morning for the ’24 Minutes of Daytona’ parade laps. 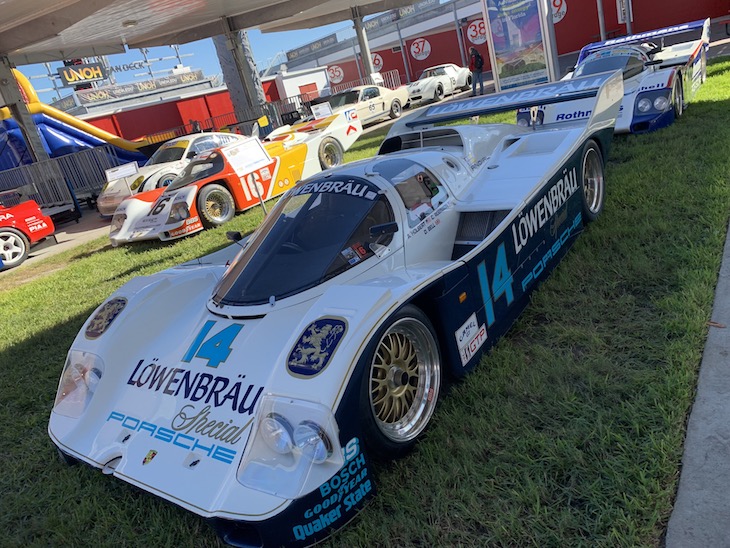 Display co-ordinator Tim Pendergast has again producing the goods with an eclectic and eye-catching group of cars on display including March and Porsche GTP racers, a smattering of Brumos Porsches and more, including one car that caught the DSC Editors eye. 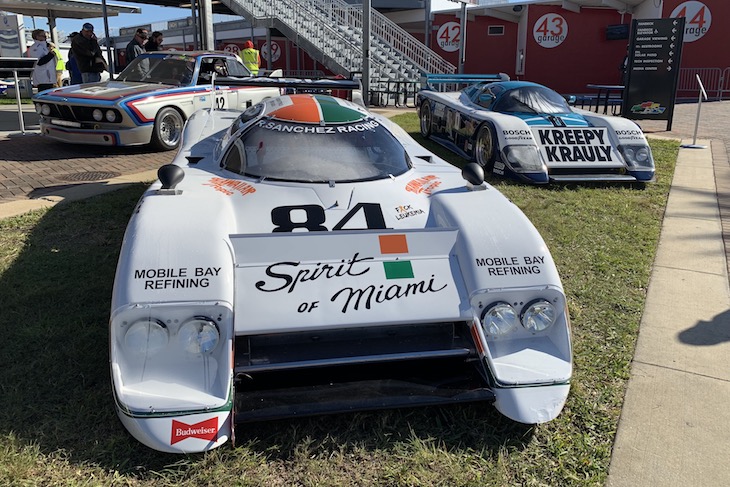 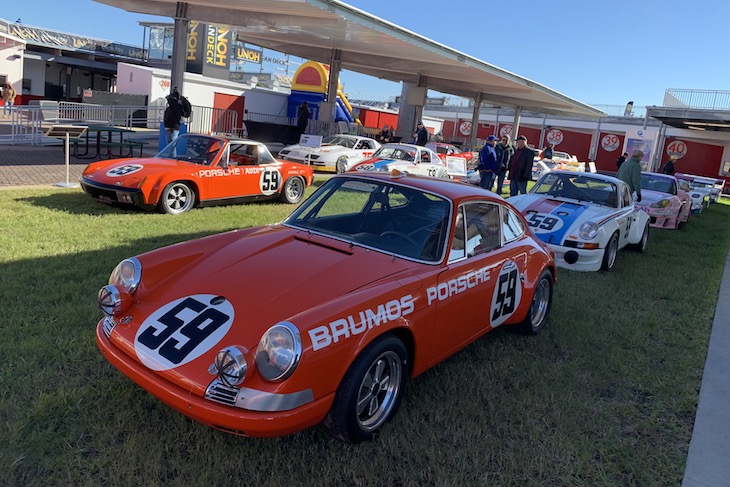 The 2000 Zip Racing Porche that has race history at the Rolex 24 Hours and later in the ALMS where, at Sebring in 2003 the DSC Editor placed the DSC vinyl on the C Pillar that remains on the car to this day! 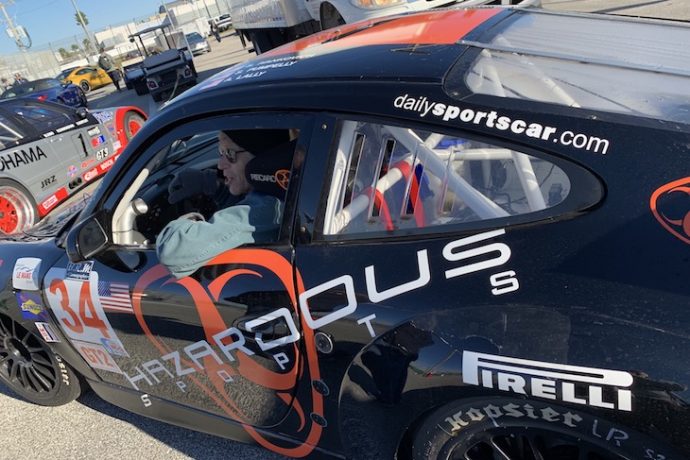