The weather was cold, and windy, while the chances of a photogenic sunset were as dark as the sky as hour three of the Rolex 24 at Daytona came to a close.

A second full course yellow shook up the field in the waning minutes of hour three.

#77 Mazda Team Joest RT-24P and Oliver Jarvis are in the lead of the race, thanks to a quick pit stop from the team which helped them leapfrog into their current position. Rene Rast is now at the helm following the most recent stop.

Second in the class is the #6 Acura Team Penske ARX-05 DPi with Dane Cameron on board. Juan Pablo Montoya had battled with the #77 Mazda for the lead in the race’s second hour, at length, the two changing places on multiple occasions through traffic.

The #31 Whelen Engineering Cadillac DPi-V.R., with Eric Curran is in third. Meanwhile, their teammates (and the defending champions of this event) in the #5 Mustang Sampling Cadillac DPi-V.R. have hit trouble early, the car taken behind the wall for repairs due to issues related to its rear lights. 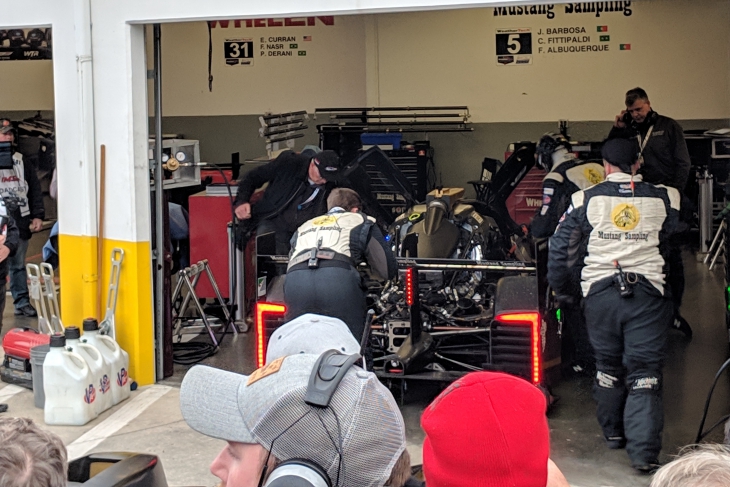 The #52 PR1 Mathiasen ORECA 07 is third in class, Enzo Guibbert took over from Mark Kvamme in the last hour.

GTLM sees Patrick Pilet has maintained the leading position in the #911 Porsche North America 911 RSR. The Frenchman did well to keep the car out of trouble through the second and third hours, something that can not be said for some of his fellow GT Le Mans competitors.

The #62 Risi Competizione Ferrari 488 GTE is one car that has limited their early race drama, Miguel Molina behind-the-wheel of the now second placed car.

The #67 Ford GT was handed a stop and hold for three minutes and twenty-seven seconds as the result of an improper pass around procedure. This is the same Ford GT that had issues in the first hour. The sister #66 Ford is however having a better run and is up to in third.

During the GTLM pit stops under the first Full Course Yellow the right front side of the #3 Corvette C7.R was hit by the #4 Corvette C7.R, as it came into its pit box. This damaged the front-right corner of the #3 and the team worked feverishly to repair the car. The car eventually came back out, eighth in class, and three laps off the lead.

The #24 BMW Team RLL M8 GTE has also run into trouble, beginning during its first driver change pitstop. Alex Zanardi could not get his modified steering wheel to function when swapping it over. The team scrambled to find Zanardi a spare one, which eventually did get the car fired, and the Italian was on his way. The car would soon falter again though, going behind the wall with a power-related issue that occured as Jesse Krohn exited the pits after getting in after Zanardi.

Leading GT Daytona is the #29 Montaplast By Land Audi R8 LMS GT3 with Christopher Mies. The #29 Audi crew is back again this year at Daytona after a hefty mid-race penalty cost them a solid finish in 2018.

Townsend Bell, who is pulling double duty this weekend as a driver and NBC Sports commentator is in second in the #12 AIM Vasser Sullivan Lexus RC-F GT3.

The #86 Meyer Shank Racing Acura NSX GT3 is in third. That car has been towards the front of the GTD field since the start and led for most of Hour 2. Mario Farnbacher is currently at the controls after a strong run from Trent Hindman.

The first casualty of the race was the #99 NGT Motorsports Porsche 911 GT3 R. Juergen Haering on board the car when the engine expired in the middle to turn one, laying oil over the entirety of the racing line. The #62 Risi Competizione Ferrari 488 GTE, and the #13 Via Italia Racing Ferrari 488 GT3 both spun on the oil, neither thankfully coming into contact with other cars or the barriers.